Some coronavirus testing sites in Melbourne were forced to close within hours of opening on Monday morning, as waiting times swelled.

The Department of Health and Human Services (DHHS) has begun updating their website with projected wait times on Monday morning. 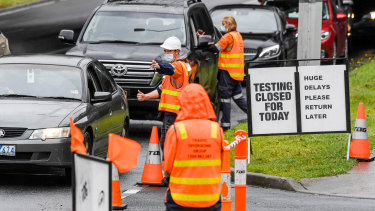 The COVID-19 testing site at Malvern Valley golf course was closed at 10am after DHHS reported wait times of over four hours.Credit:Joe Armao

Testing had been suspended at the Albert Park drive-through testing centre when it reached capacity, but it has since reopened.

However, at other sites, queues were moving well. Callers to radio station 3AW reported that a drive-through testing centre in Werribee had only one car in line.

The department said it was just a 30-minute wait for the drive-through IPC Health-run sites at Wyndham Vale and at Wootten Road Reserve.

Lucy, a caller to 3AW Mornings said she was being warned of a “three to four hour wait” at Springers Leisure Centre at Keysborough.

“There was a sign that said it was temporarily suspended, but I’ve been able to get through. I’m just in for the long haul,” she said.

Victoria’s testing chief Jeroen Weimar said he expected most of the 60,000 people who have returned from NSW over the last couple of weeks would get tested by Wednesday.

He said the state should expect a 10 to 15 per cent increase in testing capacity on Monday compared to Sunday, after the state doubled its testing numbers over the past weekend in comparison to previous weekends.

More than 200 sites will be open for testing across Monday.