A HOOTERS waitress was left in tears after a mom wrote a rude note on a receipt and the family sprayed the table with ketchup and drinks.

Posting to TikTok under the name @keylamxo, the 21-year-old said the aggressive family racked up a bill of $624 in tequila shots and food. 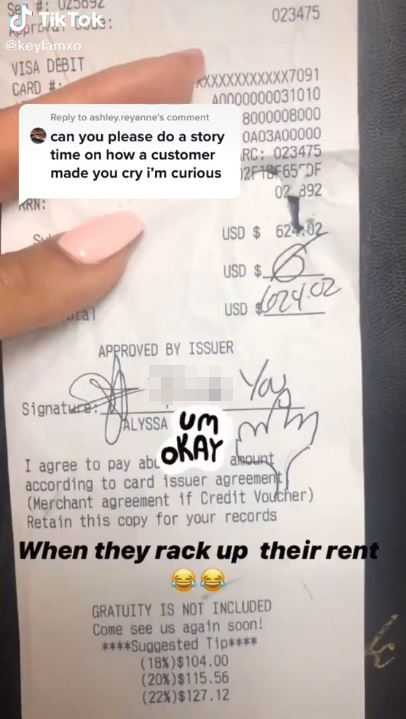 “This girl I went to high school with came in with her family to celebrate her dad’s birthday," she explained.

“The mum came in and said: ‘Bring us some Don Julio, we’re drinking good today, it’s my husband’s birthday’.

“They ordered a bunch of food – it was like, five adults and four kids and they all ate.”

When the waitress was working at Hooters shots cost $18 each – the family claimed not to know this and ordered 25.

But it was when the bill arrived at the table that the mom was left furious and refused to tip the waitress.

She added: "Like ma’am, I just work here! I’m not pocket watching, I do not know how much is in your bank account.

“Maybe you shouldn’t go out to eat if you can’t f***ing afford to.”

To make matters worse, before the family left they sprayed ketchup across the table and knocked over all the drinks.

“So this woman decides to spray ketchup all over the table and knock over all the drinks before she leaves and tipped me nothing," she said.

The woman shared the receipt in her video which shows the massive $624 bill along with the $0 tip.

And where the signature was meant to be the family had written "f**k you" with a picture of a middle finger.

However, things ended well when Keyla told her regulars about what happened she received two mega tips of $100 and $110.