Here’s Wally! Wandering walrus is spotted safe and well in ICELAND after not being seen for almost a month as he finally heads back to the Arctic

The world’s most famous walrus has been spotted alive and well in Iceland, almost a month since he was last seen off Ireland’s southwesterly coast.

The wandering walrus captured the imagination of wildlife lovers around the world with his European travels this summer, which included stops in France, Spain and the Isles of Scilly.

The four-year-old whiskery gentleman started out on his tour in March, and when he fancied a pit-stop, he’d haul his 800kg bulk onto the nearest motorboat and take a nap – sometimes for several days.

But there were concerns Wally had died after 22 days without any confirmed sightings of the marine mammal and a carcass washed up on the North Devon coast, after scientists predicted he was on route to his Arctic homeland, which is likely to be Greenland or Norway.

Now, Seal Rescue Ireland has confirmed the legendary walrus was sighted in Iceland on Sunday, a staggering 900km away from Wally’s last known location in West Cork, as he seems to be on route to the Arctic. 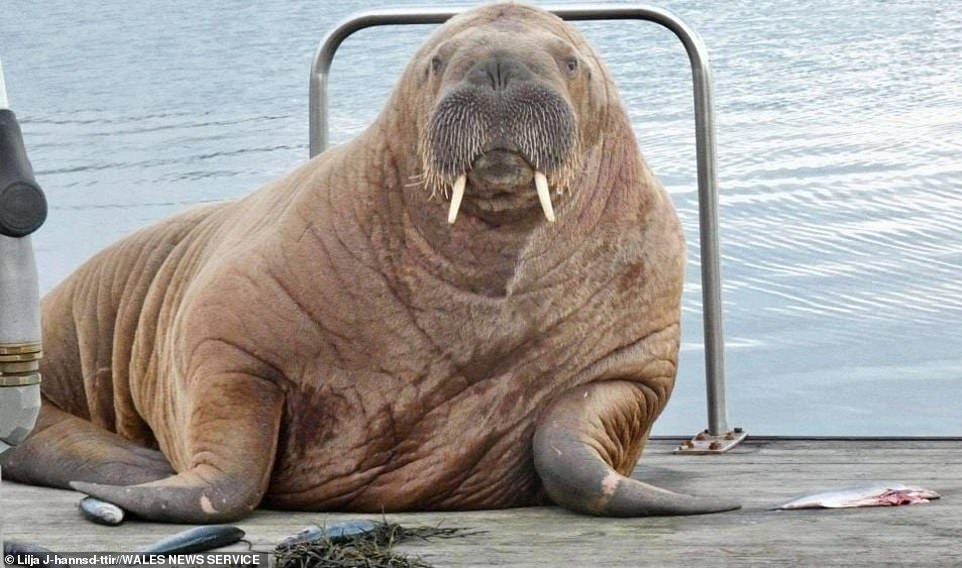 Wally the walrus captured the imagination of wildlife lovers around the world with his travels this summer, which included stops in France, Spain and the Isles of Scilly. He has now been spotted in Iceland (pictured)

Sharing the good news to Twitter, the charity wrote: ‘UPDATE: After 22 days with no confirmed sightings, we were starting to lose hope of ever seeing the young, wandering walrus again.

‘However, we just received notice that a similar-looking walrus was sighted yesterday in Iceland over 900 km away from Wally’s last known location in West Cork.

‘After conferring and comparing photos with our friends at British Divers Marine Life it has been confirmed that this is Wally!

‘Notice the similar scars on the front of both front flippers. We are absolutely over the moon that he’s not only still alive and well, but he is well on his way home to the Arctic.’

According to the charity, Wally was spotted swimming back out to sea as he continues his incredible journey, which has seen the juvenile male stop in France, Ireland Wales and the Isles of Scilly.

The charity urged people to give common and grey seals the same ‘love and respect’ that Wally has had this summer, because the marine mammals are vulnerable at this time of year as they give birth, while climate change continues to ‘threaten’ their habitats. 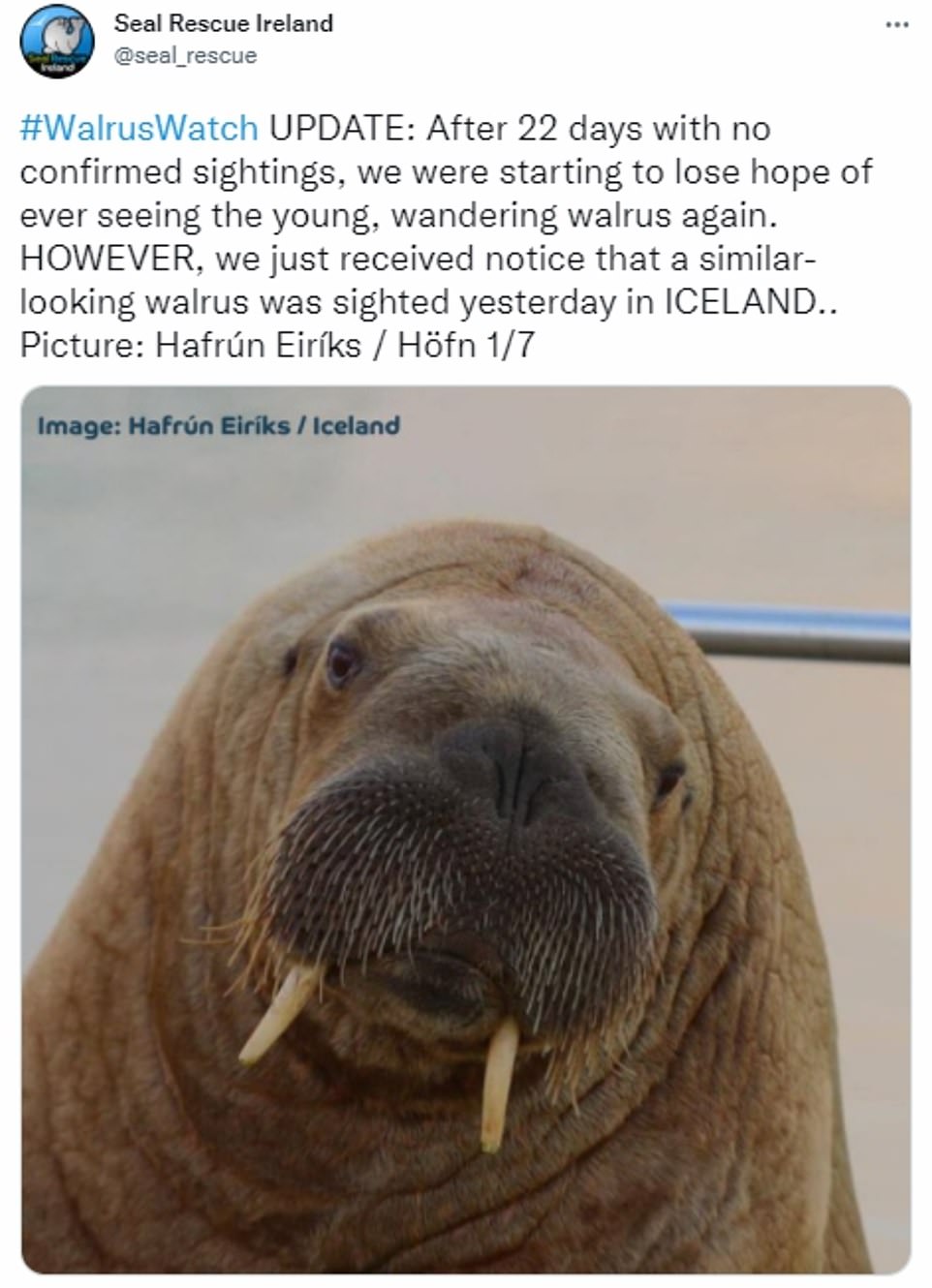 Seal Rescue Ireland has confirmed the legendary walrus was sighted in Iceland on Sunday, a staggering 900km away from Wally’s last known location in West Cork, as he seems to be on route to the Arctic 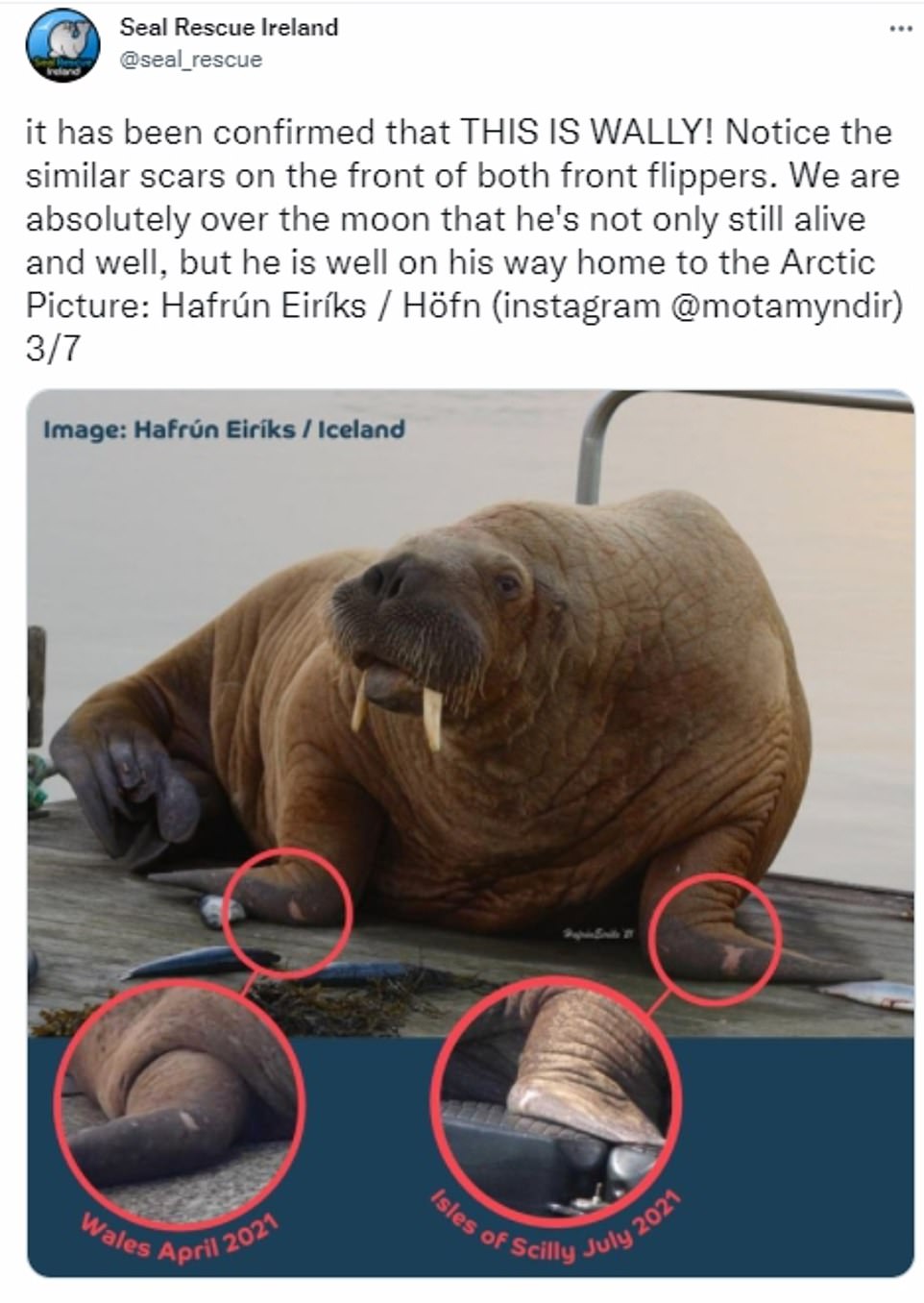 The announcement came after people became concerned Wally had died after 22 days without any confirmed sightings of the marine mammal, as scientists predicted was on route to his Arctic homeland, which is likely to be Greenland or Norway

It added: ‘We are so grateful to the many members of the public who have shown support and love for this walrus by giving him a safe place to rest and gather his strength while visiting our shores ahead of this magnificent journey.

‘Thanks to his ability to feed and rest, he has successfully made the long stretch and will hopefully reunite with his own kind again soon.

‘Please always remember to give wildlife space, and put their safety and welfare first! This success is a great opportunity to highlight the immense pressures that our marine mammals face on a daily basis from human disturbance.’

Wally became world famous this summer as he soaked up the rays across Wales, Ireland, France, Spain and the Isles of Scilly as he embarked on his wild adventure.

In the last couple of months, Wally has been a frequent sight among the pontoons and boats in the harbours and bays along the south west coast of Cork.

But as autumn approaches, marine experts predicted the 800kg male will return to the chillier waters of the Arctic and reunite with other walruses.

‘Wally is a little unpredictable but we are hoping that he will head north for winter,’ Melanie Croce, executive director of Seal Rescue Ireland, which is monitoring the walrus’ movements, said.

‘This is the season that the ice pack grows and extends further south and when walruses gather in the Arctic.

‘Walruses are social creatures and Wally is no exception so we are hoping he may finally decide it is time to go home.’ 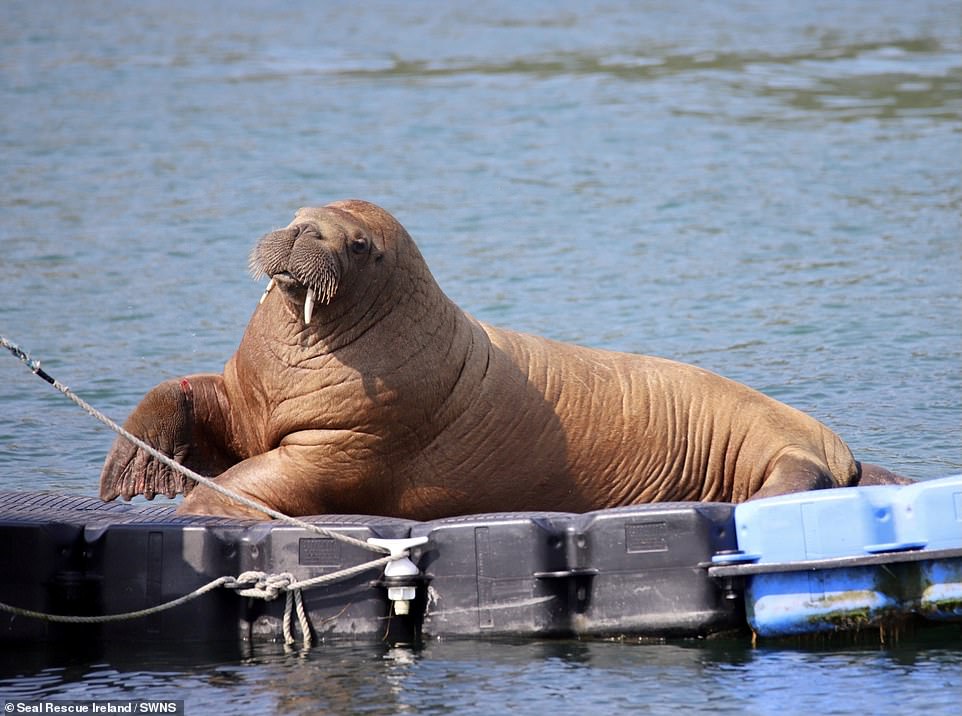 Wally (pictured in Ireland) became world famous this summer as he soaked up the rays across Wales, Ireland, France, Spain and the Isles of Scilly as he embarked on his wild adventure 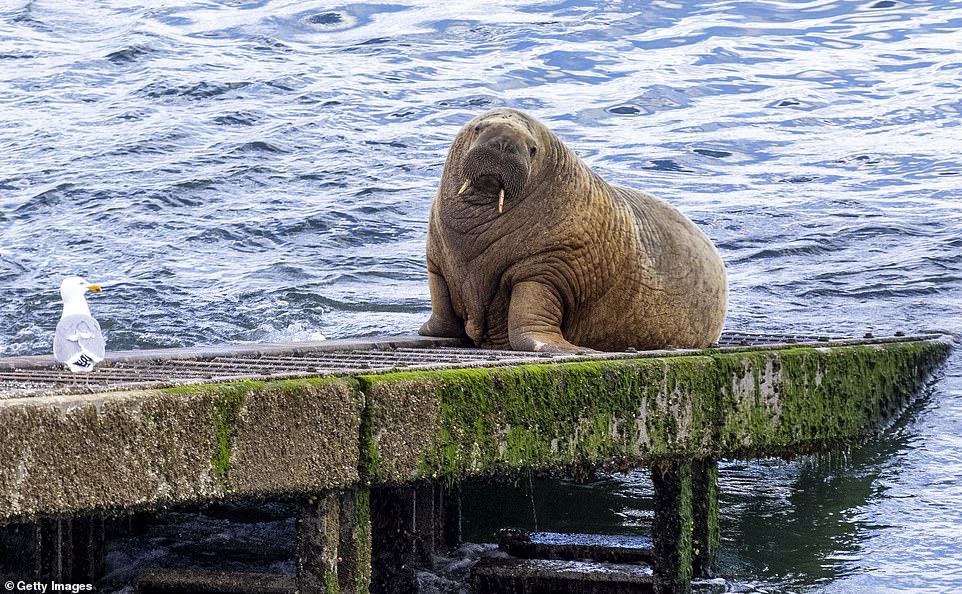 But as autumn approaches, marine experts predicted the 800kg juvenile male (pictured in Tenby, Wales, on May 17) will return to the chillier waters of the Arctic and reunite with other walruses

It is believed Wally’s adventure could be linked to climate change.

‘I would certainly suspect that sea ice melting due to climate change has displaced him,’ Ms Croce said.

‘You know, animals like walruses and polar bears, ringed seals, hooded seals, these are all species that rely on sea ice.

‘Due to climate change, we’re losing huge amounts of sea ice, and so they’re losing habitats.’

The lonely walrus is believed to be from Svalbard, north of Norway, and has been on a 4,000km solo trip for months.

From a first sighting off the south-west coast of Ireland, then on to Wales, Cornwall, France, the Isles of Scilly and Bilbao, Wally has left a trail of destruction and a couple of sunk boats in his wake.

His sighting in Bilbao in northern Spain is believed to be the farthest south a walrus has ever been seen.

‘The biggest things are to maintain safe distance of at least 100 metres, and to observe quietly,’ Ms Croce added. ‘This is a huge animal, he’s 800 kilos. And so he could hurt someone or he could hurt himself, if he’s scared.

‘If people are startling him and stressing him, it could cause him to cause damage to property.’

Seal Rescue Ireland had installed two floating pontoons and an inflatable boat for Wally to haul himself out on, but he had not been seen since the weekend when the heatwave ended and remained absent for nearly a month until his sighting in Iceland.

Ms Croce added: ‘When the weather gets worse he tends to go out to sea for a few days where he will feed and he will return when it gets better.

‘We really do hope he decides to go home, although of course he will not be aware of climate change and what awaits him.

‘It is likely that over the next few years we will see more vagrant Arctic species like Wally as they are displaced by the effects of climate change.’ 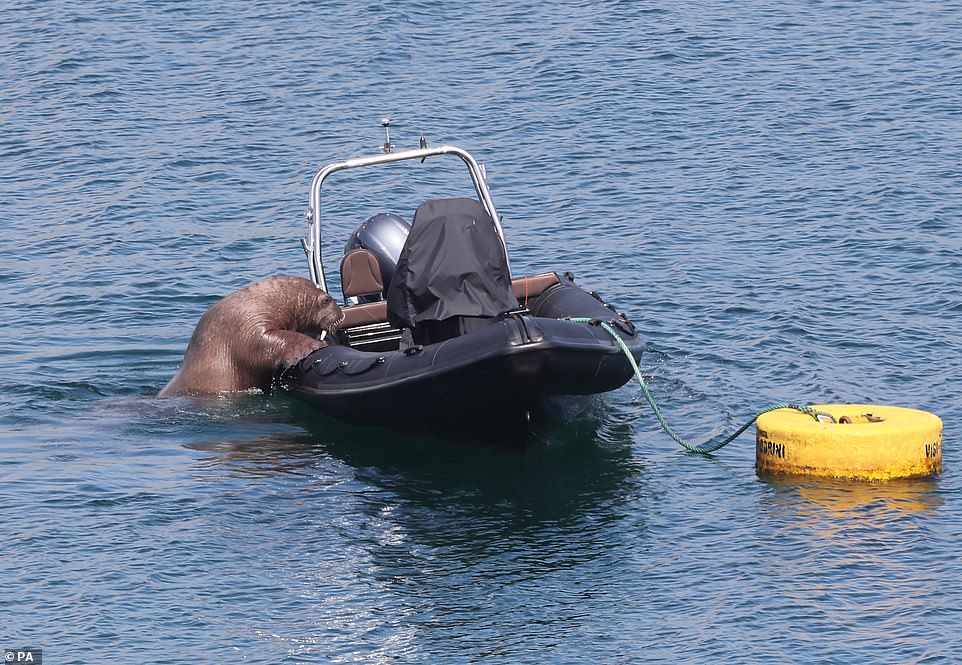 The walrus had got into hot water after he became accustomed to climbing on dinghies in the area and damaging boats in St Mary’s Harbour. Pictured: Wally climbing on a boat off the coast of Ardmore, Co Waterford, on August 4 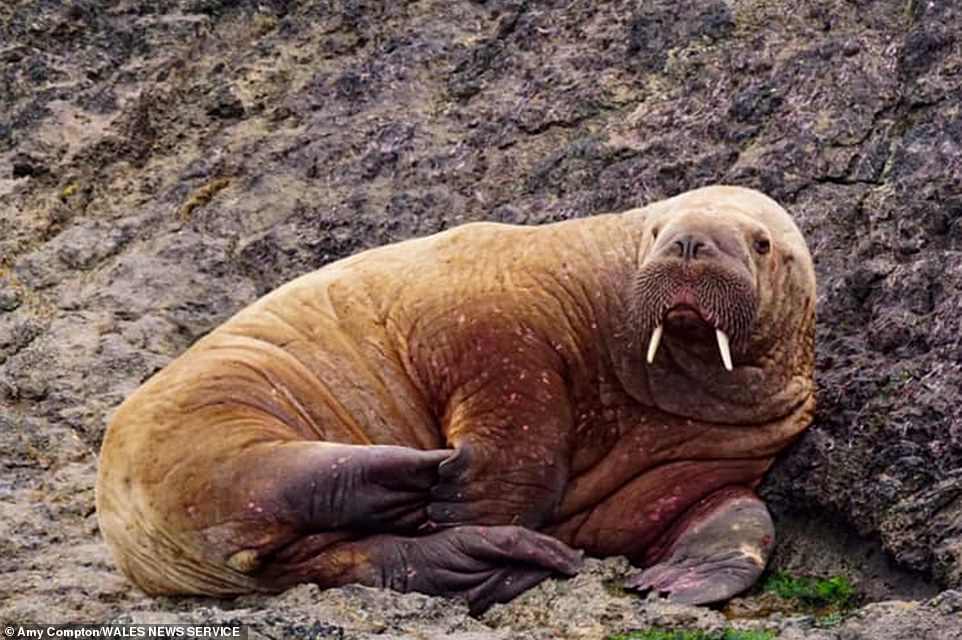 He was first seen in Ireland before taking up residence in Tenby, Pembrokeshire in March.

The walrus had got into hot water after he became accustomed to climbing on dinghies in the area and damaging boats in St Mary’s Harbour.

A customised pontoon with his own scent was built for him so he could have a safe space to rest before he was able to travel again.

Locals on the Isles of Scilly were warned to stay away from Wally the Walrus as high temperatures are ‘challenging him’.

The Cornwall Seal Group Research Trust warned: ‘This heat is not something he is adapted for so it’s more important now more than ever to give him rest and space.’

Alaskan walrus expert Lori Quakenbush said Wally would only be able to move on if the has the energy to make the 3,200km journey home, and it now appears the marauding mammal has finally built up the strength to head home.