Was Dixon of Dock Green the Met's first gay policeman?

Was Dixon of Dock Green the Met’s first gay policeman? How inspiration for TV bobby was an officer who made no secret of his sexuality (even though it was illegal), partied with the Bloomsbury set – and had a long affair with E.M. Forster

On a visit to studios in which the much-loved BBC TV series Dixon Of Dock Green was filmed, the Queen told its star Jack Warner that she and her family watched it regularly and regarded it as something of a ‘national institution’.

The royals were not the only fans of the show, which ran between 1955 and 1976, drawing audiences of more than 14 million people.

But while its appeal lay in Warner’s portrayal of a reassuringly old-fashioned bobby on the beat, there was nothing conventional about Harry Daley, the sergeant said to have been the real-life inspiration for Dixon of Dock Green.

The first openly gay policeman in Britain, Daley made no secret of his sexuality from the moment he first joined the Metropolitan Police in 1925, almost 100 years ago. 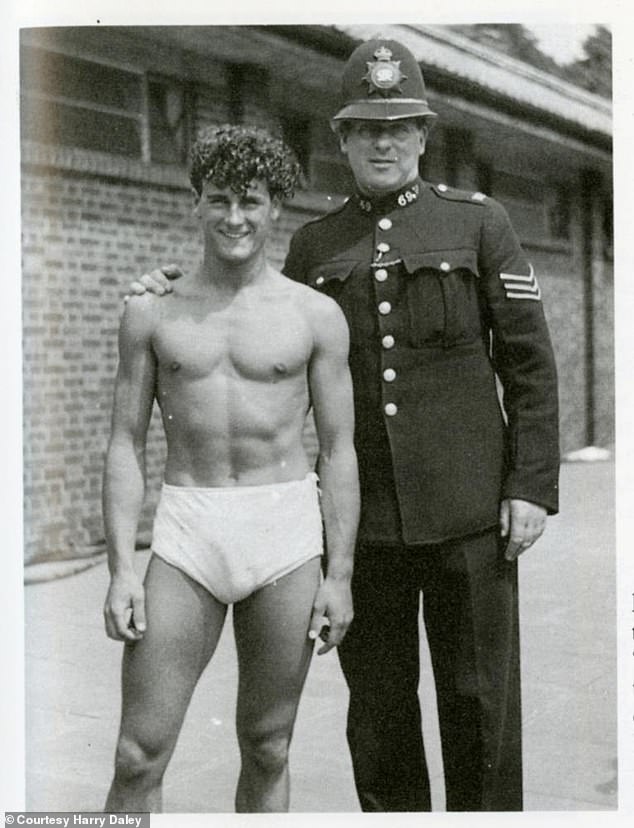 This Small Cloud: A Personal Memoir of Harry Daley includes this image of Daley in uniform with a friend

If that seems astonishing in an era when homosexual acts between men was illegal, still more remarkable was this working-class policeman’s ability to bridge two very different worlds as he found himself drawn into the decadent clique of writers, artists and intellectuals known as the Bloomsbury Group.

For some years, he was even the lover of celebrated author E.M. Forster but his story has come to the fore thanks to another member of that startlingly permissive set, the artist Duncan Grant.

Made available as part of LGBTQ+ History month, it comes with a warning that it is suitable for adults only. But no amount of naked flesh can quite match the surprise of seeing another of Grant’s little-known paintings: a fully-clothed portrait of Harry Daley in his policeman’s uniform.

That Daley’s superiors would have allowed one of their ranks to sit for one of the most controversial artists of the day seems extraordinary.

But this was far from his only experience of celebrity. In 1929, just four years after he joined the Met, the BBC invited him to give a series of radio talks about being a London policeman. 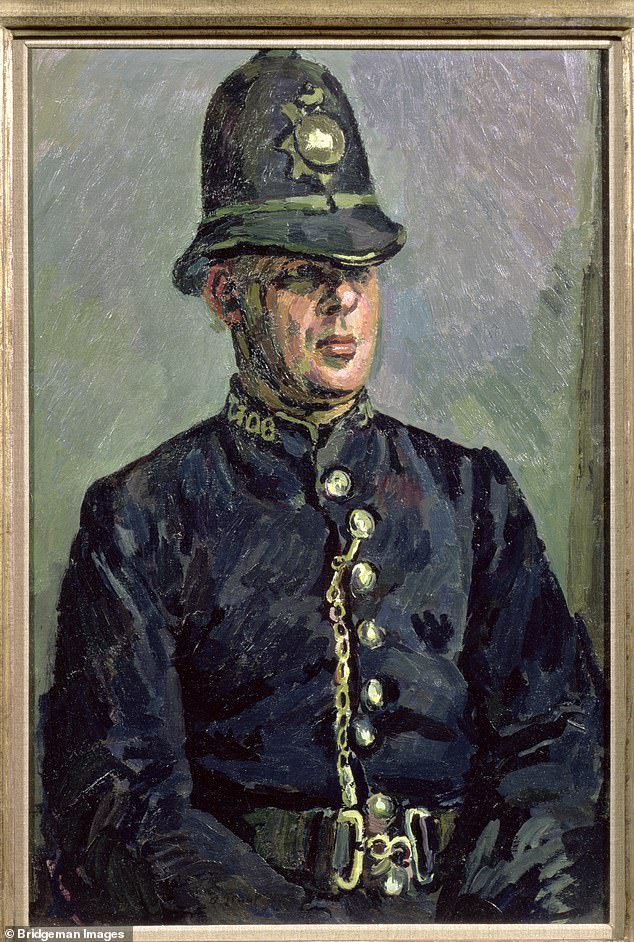 Harry Daley’s story has come to the fore thanks to another member of that startlingly permissive set, the artist Duncan Grant.

In his book Fighting Proud: The Untold Story Of The Gay Men Who Served In Two World Wars, historian Stephen Bourne has suggested that these talks may have inspired writer Ted Willis to create the character of Dixon of Dock Green — but one can only wonder what the redoubtable fictitious policeman would have made of the real-life Dixon’s off-duty escapades.

‘In the days when gay officers had to conceal their sexuality, Daley was an exception, happily engaged in unlawful acts while upholding the law,’ writes Bourne.

The idea that his attraction to men should be an obstacle to his police career seems never to have occurred to Daley.

Born in Lowestoft, Suffolk, in 1901, he was one of five children in a close-knit working-class family which suffered two tragedies — the death of his fisherman father at sea in 1911, and that of his older brother Joseph, killed in action just a few days before the end of World War I.

Shortly before his brother’s death, his mother had moved the family to Dorking in Surrey, where Daley worked as a delivery boy but dreamed of the ‘bright lights’ of London, spending every weekend visiting the capital’s cinemas, art galleries and theatres.

Described by Forster’s biographer P. N. Furbank as ‘plump, curly-headed, genial and rather cocky in manner,’ he remembered how ‘big boys like myself were always advised that we should join the Police.’ 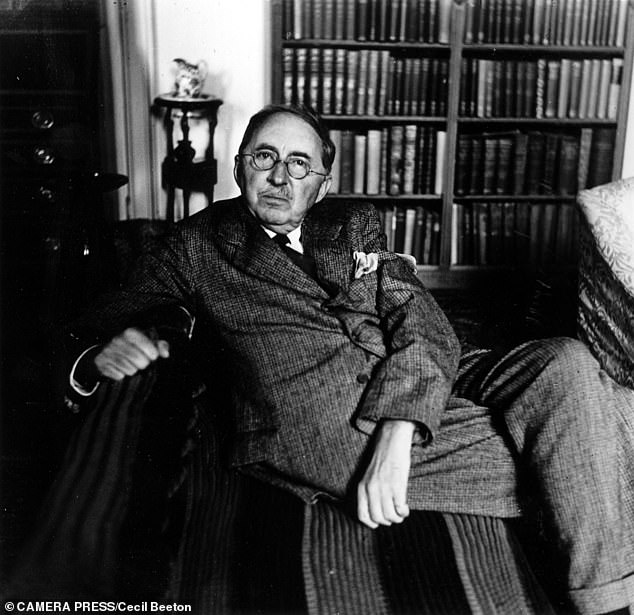 Those same officers also showed equanimity when Daley began his relationship with E. M. Forster and brought him to stay overnight in his cubicle

With a career decided upon, Daley was only ever going to opt for the Met. The move to London offered him a wider opportunity to explore the passions apparent in a recurring adolescent dream about being carried off by the local coal-man.

‘Neither of us wore a stitch of clothing and his hands were very warm,’ he said. ‘It is possibly not everyone’s idea of romantic happiness to be kidnapped by a naked coal-man and in this case I … inadvertently crossed the narrow dividing line between romanticism and something else.’

Another regular dream, or rather nightmare, resulted from the well-meaning efforts of friends and family to push him in the direction of available young women.

‘Having just been married, I lead my beautiful bride to the church door. At this point, I cry out in despair, “Oh what a bloody fool I am” and I wake sweating — gradually realising that I have not really ruined two lives.’

By contrast, his fellow recruits were under no illusion about his sexual preferences.

‘After a few months we began to poke out as individuals and I seemed to poke out more than most,’ he wrote. ‘It was clear from leg-pulls, jokes and jibes that my companions knew I was homosexual.’

In part, he ascribed this to his choice of off-duty clothing.

‘My critics were always sensibly clad in blue serge suits and black boots. Referring to the fact that I wore no hat and flannel trousers (“now you can see what he is”) they intimidated me by foretelling trouble when the Inspector saw me.

‘With rising anger I decided there and then to make friends openly with the people to whom I was attracted, irrespective of job, class or criminal record — and b****r the consequences.’

Throughout his career, he suffered occasional homophobic bullying. Once someone daubed an obscene image on an office wall with the words ‘Love from’ plus his badge number — written underneath, and he also described many ‘malicious remarks, disguised as jokes’.

In response, he drew inspiration from a story written by the Edwardian satirist Saki, ‘in which a fox wasn’t chased because he didn’t run. He wished the hounds and the people on horseback would go away.

This they did, rather shamefacedly, not knowing what to do if the fox refused to run.’

By similarly declining to react, Daley deflected much of the hostility from the same officers who delighted in mistreating the gay men they arrested, sometimes even planting evidence on them.

‘Now and then they brought in a Nancy-Boy, as they were then called, and treated him as though he were an inanimate object without feeling,’ he remembered.

‘They rubbed his face with toilet-paper to procure evidence of make-up, joked and laughed about him as if he was not present, and always found the same-sized tin of Vaseline in his pocket.’

Daley never intervened, but neither did he make a pretence at being what he called normal: ‘I could have taken to pipe and beard, as many do, but I decided to be natural and take my chance.’

His affable personality helped win him friends among his colleagues and a promotion to sergeant — even though many of his flings were with the petty criminals on his beat. ‘I often had to lock up my friends and acquaintances, not as upsetting as it sounds,’ he said.

‘They were from families where such things are no disgrace and had usually committed trivial offences, with the prospect of early bail and a small fine.’

His preference was for ‘normal men, older, rougher and stronger than myself’. But while out patrolling the streets of Hammersmith one Sunday morning, he struck up conversation with a handsome 31-year-old man who lived in a flat beside the river.

He was J.R. Ackerley, author of The Prisoners Of War, a gay-themed play which had somehow made it past the censors to be a critical success in the West End.

It was thanks to Ackerley, who became a producer at the BBC, that Daley appeared on radio, and their friendship gave him an entree into the Bloomsbury Group.

Alongside aristocrats and heirs to great fortunes, among them Eddy Sackville-West who owned Knole, a vast Elizabethan country-house in Kent — its members included artists like Duncan Grant and writers such as Raymond Mortimer, a theatre critic whose flat was packed with Picassos.

As Daley recalled, his arrival sparked great envy of Ackerley.

‘Soon almost everyone had their policeman friend and other friends, too, in all sorts of uniforms, right down to bus conductors.’

The sergeant in charge of his section house — the police equivalent of barracks — was unexpectedly tolerant of these exotic new acquaintances, encouraging Daley to entertain them in the mess-hall.

One evening he gave them a ham-and-egg supper before taking them off to the circus — an enjoyable night even if ‘their loud chatter and Raymond Mortimer’s fur coat caused some restiveness among the policemen.’

Those same officers also showed equanimity when Daley began his relationship with E. M. Forster and brought him to stay overnight in his cubicle, separated from his neighbours by a thin partition.

In the morning, the literary legend would join the other men for a fry-up in the mess-hall and sometimes he would walk Daley’s late shift with him, through streets ‘deserted except for a few costers’ barrows’, delighting in their chats with the shadowy types who haunted the night.

As Forster had once confided in his locked journal, which he called his Sex Diary, he wanted to ‘love a strong young man of the lower classes and be loved by him’, but in Daley he also found a meeting of minds. They both loved opera and classical music, with Daley ecstatic about hearing Forster play a Mozart sonata on the piano.

‘It was a golden moment made especially memorable because, music lover that he was, Harry had never before heard a piano played live,’ explained Wendy Moffat, another Forster biographer.

Despite happy interludes, their six-year relationship foundered as Forster, terrified that his sexuality might be made public, realised Daley was wildly indiscreet.

In 1932, he turned instead to another, far more circumspect, policeman named Bob Buckingham — a galling choice given that it was Daley who had first introduced them.

For Daley, the break rankled and he began to sense, or imagine, hostility on the part of Forster and his friends — adding to his awareness of social tensions in their friendship. All this led to a cooling-off between the two men, and between Daley and the Bloomsbury set.

When he retired from the police in 1950, he joined the Merchant Navy, keen to see more of the world, but soon fell ill with diabetes and spent the years before his death in 1971 in Dorking. He shared the former family home with his brother David, who was also gay, and David’s long-term partner John.

Daley never seems to have found a relationship like that for himself and the closest he came may have been his affair with E. M. Forster.

In the event, Daley made no mention of any of the Bloomsbury set in the eye-poppingly frank autobiography, This Small Cloud, published 15 years after his death.

Today, the most tangible reminder of Daley’s unlikely entanglement with the Bloomsbury Group is that painting by Grant, in London’s Guildhall Art Gallery.

Shown in his helmet and tunic, with gleaming buttons down the front, he seems the very picture of a traditional policeman of the interwar years — an image as far from the real Harry Daley as Dixon of Dock Green is from modern-day policing.