Was the Playboy revolution good for women?

Hugh Hefner, the founder of Playboy magazine, has died aged 91 after a lifetime of selling not just magazines but a fantastical lifestyle. What did his sexual revolution mean for women?

Much of the press coverage of Hefner’s death has focused on the two sides to his legacy, pitting sleaziness against the way he opened American sexual attitudes.

The feminist Camille Paglia called him “one of the principal architects of the social revolution” and Hefner himself said in 1992 that he was proud he had “changed attitudes toward sex”.

Playboy was, after all, first published in 1953, when US states could ban contraceptives, and well before the so-called lads’ mags of the 1990s and the pornography that is widely available online today.

But some feminists argue there is a third part to Hefner’s legacy: that he built his revolution through images of women’s bodies.

Dr Thekla Morgenroth, who researches gender stereotypes at the University of Exeter, said: “Hugh Hefner was not a feminist or liberator of women as some claim.

“Sure, he and his empire challenged prudish norms of the 1950s – according to which women were chaste virgins or caring mothers – but women remained sexual objects in his portrayals.

“I don’t think there is anything inherently bad about nudity or even pornography but his idea of sexual liberation remained one in which women were objects with the purpose of providing pleasure to men.

“This was equally reflected in how he portrayed his lifestyle – in which women functioned as accessories and status symbols, not as equal partners.

“He did not empower women. He gave them just one more restrictive role to choose from.” 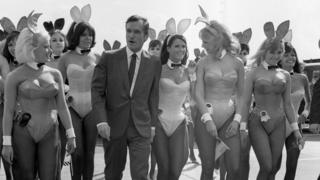 Women’s activist Kellie Turtle agreed, saying: “It was about putting women back in their place, which was as objects for male desire.”

She told the BBC she thinks his success was “part of the backlash against women’s move into public life in business and politics”.

“It sent that message back to women that you don’t really have influence and your place is to look attractive,” she said.

“I think the social revolution that I’ve benefited from is one that was created by women, not by men. What Hefner did was just place men back at the centre of it.

“He was interested in sexual desire but only in how it benefited men.”

When feminist Gloria Steinem went undercover as a Playboy Bunny in the 1960s, she found the other women working there to be bound by stringent rules regarding appearance.

Ms Steinem produced a falsified CV but it was brushed aside by a woman who told her: “We don’t like our girls to have any background, we just want you to fit the bunny image.” She revealed that women would have their pay docked if they failed to show up to the make-up room on time, if their underwear was showing, or if they ate while on duty.

Hefner lived with many women at the same time in what became known as the Playboy mansion – the site of lavish parties.

The women had a strict lifestyle, including a 21:00 curfew and pre-bed routines where the women living there had to change into pyjamas and, a former Playmate wrote in a book, have sex with Hefner.

They were not allowed male visitors.

Holly Madison’s book also accused Mr Hefner of playing his girlfriends, of which she was one, off against each other. He responded with a statement saying a few of the women he had had romantic relationships with had later “chosen to rewrite history in an attempt to stay in the spotlight”.

Meanwhile, many women who staffed the clubs and lived in the Playboy mansion have paid tribute to Hefner.

Kim Kardashian, a former cover star, tweeted that she was honoured to have been part of Playboy, and Pamela Anderson posted a video of herself crying to Instagram.

The life Hefner led was undoubtedly many men’s fantasy, and in the world of magazines, aspiration sells.

But writing in the feminist magazine Ms six years ago, Gail Dines said: “For women, there is nothing nostalgic about sexism. As feminists continue to fight for equality, men like Hugh Hefner who continue to exploit women should not be held up as ‘visionary’.

“This is an insult to women everywhere.”