‘We are all in it together’: Ex-Olympian Camplin bunkers down in Hong Kong

Olympic gold medallist Alisa Camplin is wearing a quarantine bracelet while self-isolating in Hong Kong after her dash to be with her husband before restrictions on travellers were applied fell short by a couple of hours when her flight from Melbourne was delayed.

The delay meant Camplin's husband Oliver had to quickly evacuate their apartment in Hong Kong and find alternative accommodation in order to continue working while she settled inside with their two children Florence, six, and Felix, three.

The 45-year-old former aerial skier, who won gold at the 2002 Salt Lake Winter Olympics and Olympic bronze four years later, says despite the obvious difficulties in being inside with two young children she is not complaining and called on the community to work together to slow the spread of coronavirus. 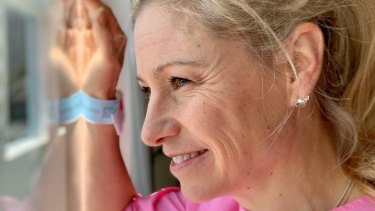 "I don't mind that I am in this situation. I actually feel safer," Camplin said.

Camplin's journey began when Hong Kong announced that new rules for incoming travellers would apply from midnight on March 19. She booked a flight to arrive in Hong Kong hours before the deadline so she could see her husband for the first time in nine weeks.

However an engineering problem left her flight stuck on the tarmac at Tullamarine and pushed her arrival time beyond midnight. Camplin gathered her luggage on arrival at 4am, was given the quarantine bracelet and rang her husband – who works in an essential service – so he could walk out one door as she and the two children walked in the other.

Camplin is now housebound by order of the government until the first week of April.

"We have smart phone app that has scanned our quarantine restrictions (QR) tag and digitally by wifi, records exactly where we are at all times," Camplin said.

"We have health monitoring charts, we have to show them to the health department twice every day. They have rung twice to check to see if we are in our place, filling out our forms and are healthy, which has been good. We have a 24-hour hotline."

Camplin emphasises that every country's approach needs to be different but hopes Australians are now taking the measures seriously.

She says that in Hong Kong – which has introduced even tougher measures in the past 24 hours after a second wave of coronavirus cases (plastic on elevator buttons is replaced every 15 minutes) – she is updated on the number of people being tested for coronavirus in her building.

As the days pass she is trying to be creative with her children admitting that like everyone in a similar situation it is tough going.

"It's hard … but the longer it takes for people to adapt, the longer we are all going to be in this sort of situation," Camplin said.

The gold medallist said she was not surprised to see the summer Olympics in Tokyo postponed considering the decision inevitable for a multitude of reasons.

"This is all bigger than sport and so it is the right thing not just for giving the athletes all a fair shot and a fair chance of preparation around the world but just to keep things in perspective," Camplin said.

Right now, Camplin is keeping perspective, motivated at the prospect of playing her part as the world takes even more twists and turns than she used to at her peak.

She has been through hardship having lost her first child Finnan when he was just 10 days old and she continues her involvement in the Royal Children's Hospital and Finnan's Gift which raises money for pediatric heart care.

"We need to be non-judgmental as much as possible. Everyone is trying to cope in their own different way," Camplin said. "We have to be kind with each other." 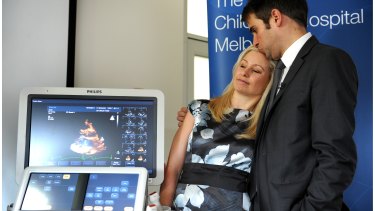 Alisa Camplin with her husband Oliver Warner in 2011.Credit:Craig Abraham