Whakatane: As they had done the day before, Whakatane locals lined the streets. Unlike the events a day earlier, there was a sense of relief in the air. 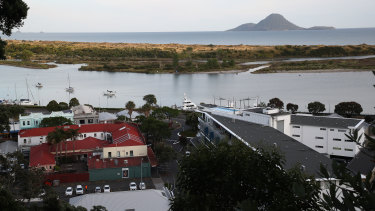 Tinsel-covered trucks and kids in trailers took part in the coastal tourist town's annual Christmas pageant along the main street. After six days of anguish and grief it was a chance to be thankful and smile.

The town of 34,000 on New Zealand's Bay of Plenty would traditionally be gearing up for the start of the holiday seasons. Motels and caravan parks are booked out months in advance.

Tourism is the lifeblood of Whakatane. The town welcomes visitors with signs advertising it as the gateway to Whakaari/White Island.

Restaurants, bars and hotels in the town trade off the volcano's name which sits, smouldering about 48 km offshore. 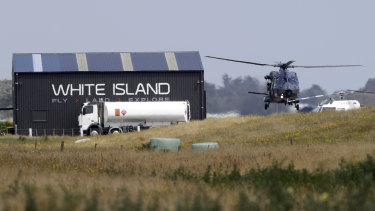 If you don't want to step foot on the island you can also fish or dive around it.

But the future of tourism on the privately owned island is now unclear as families mourn the deaths of at least 14 tourists who visited on Monday while at least as many fight for their lives in hospital.

Such is the island's importance to the region, a verging-on-distasteful debate about its future began while six bodies were still lying in one-metre deep ash on its crater.

New Zealand MP Anne Tolley, who represents the electorate of East Coast, said the eruption had torn the town apart. 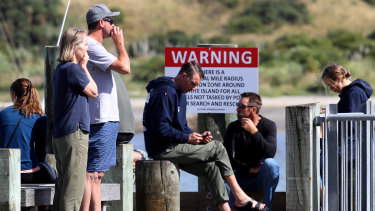 People comforting each other at Whakatane following the White Island volcano eruption.Credit:Getty Images

"We're all shattered," she said.

"Everyone is really shocked and upset that visitors to such a beautiful place have lost their lives.

"They have suffered trauma, even those who survived or those who weren't on the island have been traumatised by the extent of these injuries."

But Tolley is adamant tours should return to White Island once the dust has quite literally settled. 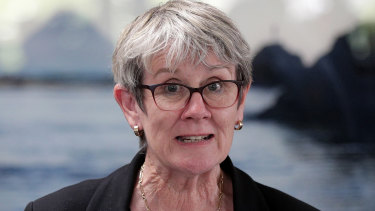 But not all in the community believe White Island can reopen.

On a makeshift memorial along the Whakatane harbour a note reads: "Whakaari has spoken … and now we must listen. For too long we have climbed all over her.

"On Monday she roared. She clutched people into her very heart and took them. I truly believe she will continue to embrace them until we listen to her cry.

"And when we promise we will no longer climb like kutus (a Maori term for vermin) all over her sacred head."

Local tribes imposed a rāhui, a cultural temporary ban, on the waters along the coast on Monday following the explosion. It has meant no one is allowed in the water without the permission of elders out of respect for the dead.

"She's saying, 'This could be enough, I want a rest, I don't always want to be abused because you're using me' – $NZ260 million dollars a year – is that really the most important thing? No, it's not, it's people," he told Stuff.

Ray Cas, a volcano expert from Monash University, said this week White Island had been a disaster waiting to happen. The Emeritus Professor said when he visited the island, he was in disbelief that tour groups were allowed there.

“It’s been something very iconic and it’s been an effective part of New Zealand’s tourism story,” Turner said.

“If it is safely able to continue that would be fantastic. It is part of an adventure tourism package. New Zealand has tended to specialise in that type of tourism and the nature of adventure tourism is that there is a degree of risk.”