What can't she do: Emma Raducanu is not just a star on a tennis court

Emma Radu-can do ANYTHING! From golf to motor racing and ping pong… how Britain’s teen tennis sensation is not just a superstar on court

Although Emma Raducanu has shot to stardom for securing one of the greatest achievements in tennis and stamped her name on the sport’s record books, the 18-year-old isn’t just a dab hand with a racket.

The teenager from Kent has been playing tennis since she was just five years old but counts it as just one of her many sporting talents along with golfing, skiing and ping pong.

Her parents Ian and Renee, who both work in finance, were keen to ensure she remained well-balanced and her hobbies also include go-karting and motocross, as she has remained dedicated to her studies alongside tennis.

Emma smashed her way onto the British tennis scene by making the fourth round of Wimbledon as a wild card but it was at last night’s US Open final where she cemented her status as one of the sport’s breakout talents.

But Raducanu is far from an overnight success, having started playing tennis at the age of five, three years after arriving from Toronto in Canada with her family. 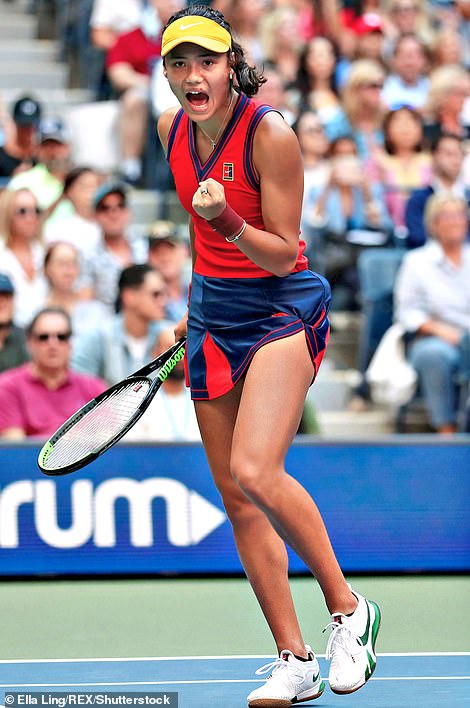 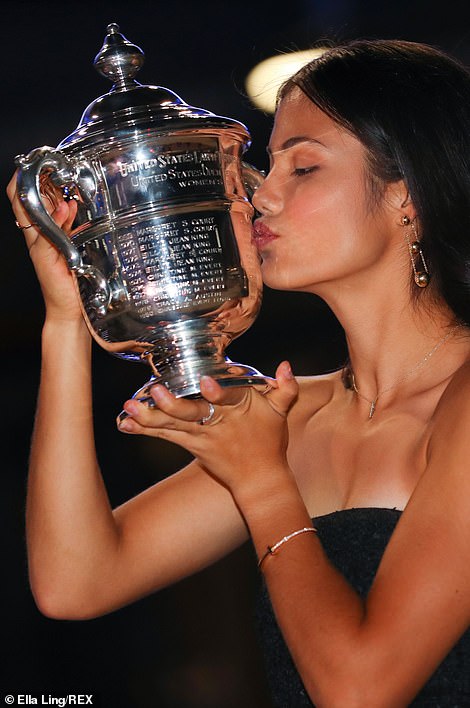 Star Emma Raducanu has smashed her way into tennis record books with her historic win at the US Open last night but the talented 18-year-old is not only a dab hand with a racket. Pictured: During the final (left) and with the US Open trophy (right)

Bromley Tennis Centre was the next port of call, where she trained from the ages of 10 to 16, while Newstead Wood grammar school, which also produced world champion sprinter Dina Asher-Smith, also played a significant part in her sporting education.

Not that Raducanu needed much encouragement, with varied interests in go-karting, motocross, horse riding, tap dancing, golf, skiing and basketball.

The teenager regularly shares photos and videos on her social media pages showing off her array of sporting talents. 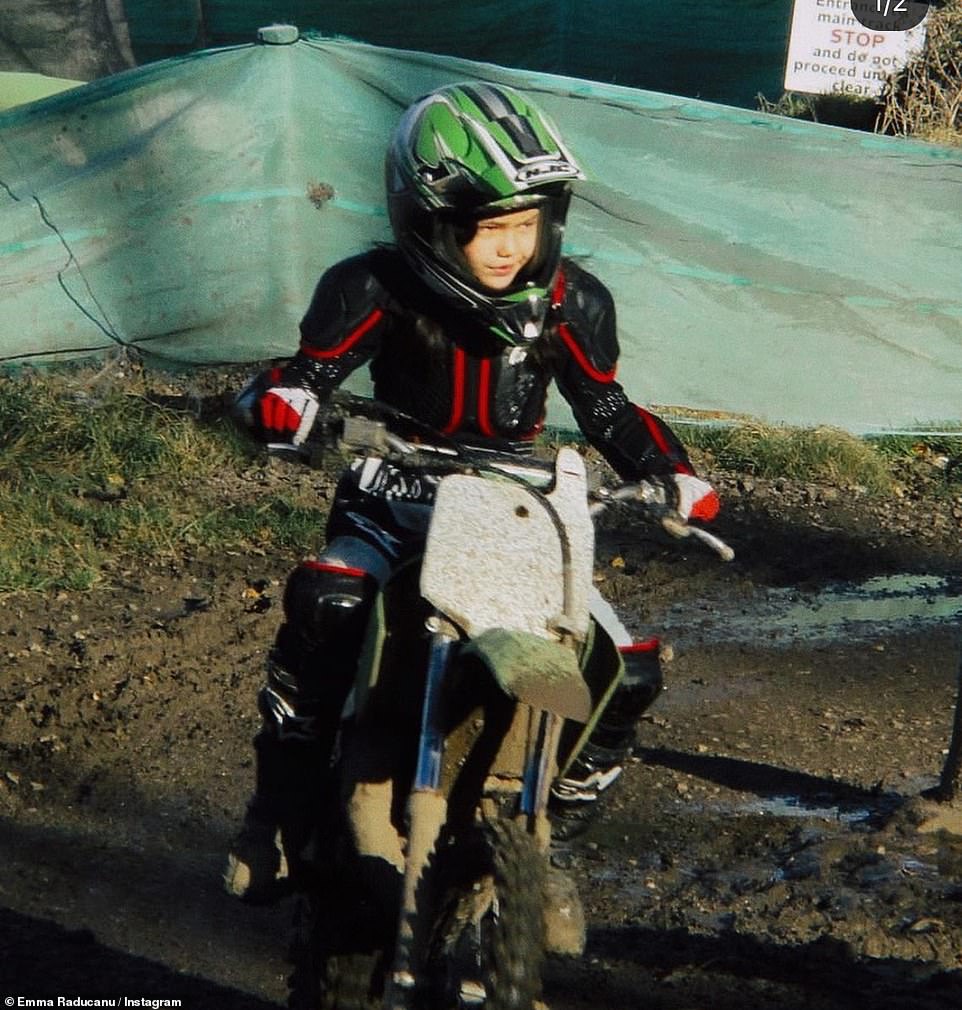 Raducanu is not shy about being a bit of a petrolhead and is a keen fan of motocross. Pictured: Emma on a baby Kawasaki 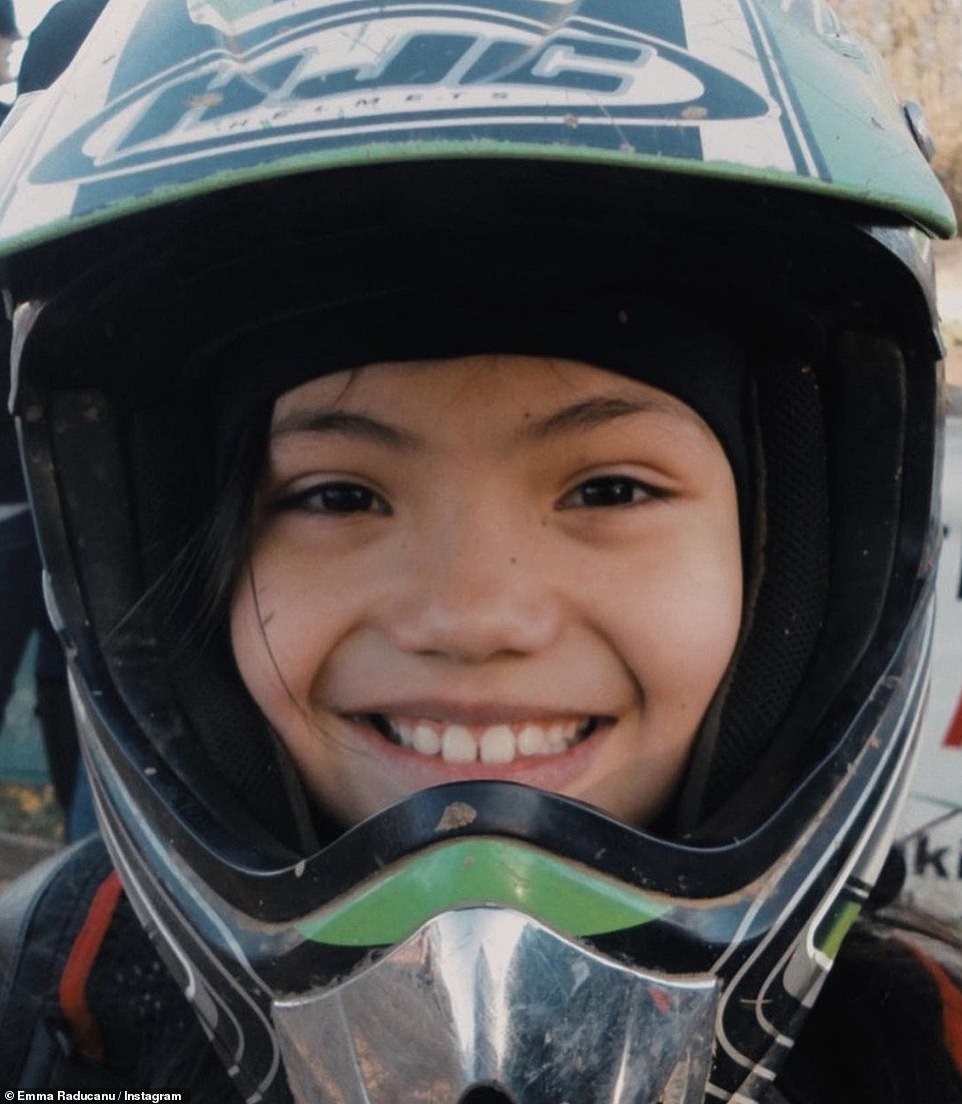 Between five and eight, Emma did go-karting, starting out in a bus garage in Streatham before moving on to a proper track 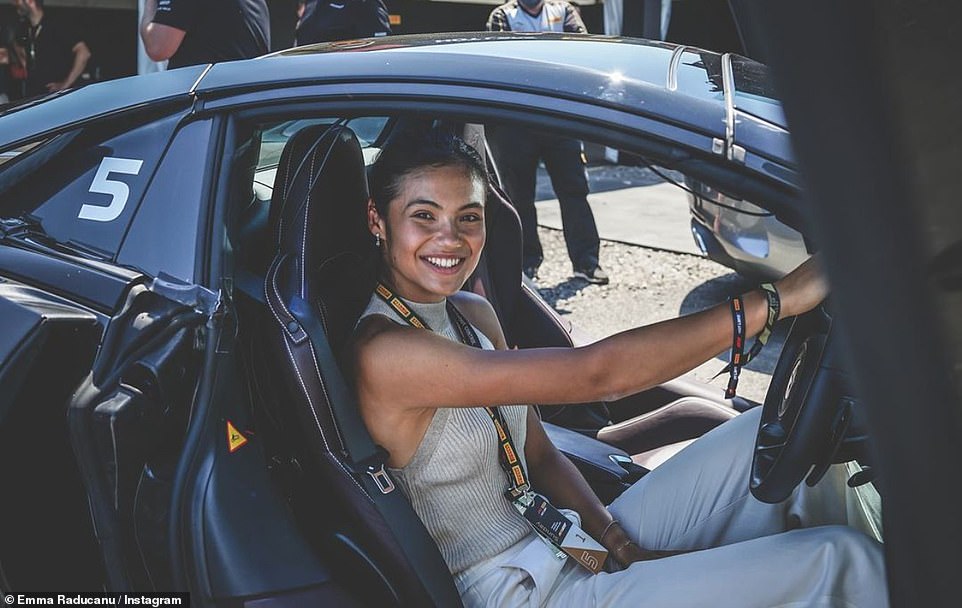 Pictured: After her impressive run at Wimbledon, Emma was invited to enjoy a ride in a McLaren 720s at the British GP

Outside of tennis, Raducanu is a bit of a petrolhead and counts F1 and motocross as some of her biggest passions.

Between the ages of five and eight, she used to do go-karting, starting out in a bus garage in Streatham before moving on to a proper track – and from the age of nine, she also did motocross and has shared childhood photos of herself on a baby Kawasaki.

In her spare time, she still likes to dabble in both go-karting and motocross – although it feels as if she might struggle to find the time after her rise to stardom.

After her breakout success at Wimbledon, Pirelli welcomed Raducanu for a visit to the track during the British Grand Prix and she shared impressive footage of her ride in a McLaren 720s, describing the experience as ‘a treat’.

And in China, where her mother was born and Emma visits each year, the teenager is better known for her skills as a ping-pong player.

According to the Times, Emma made annual trips to her mother’s home city of Shenyang before the pandemic and would regularly train at the city’s ping pong club. 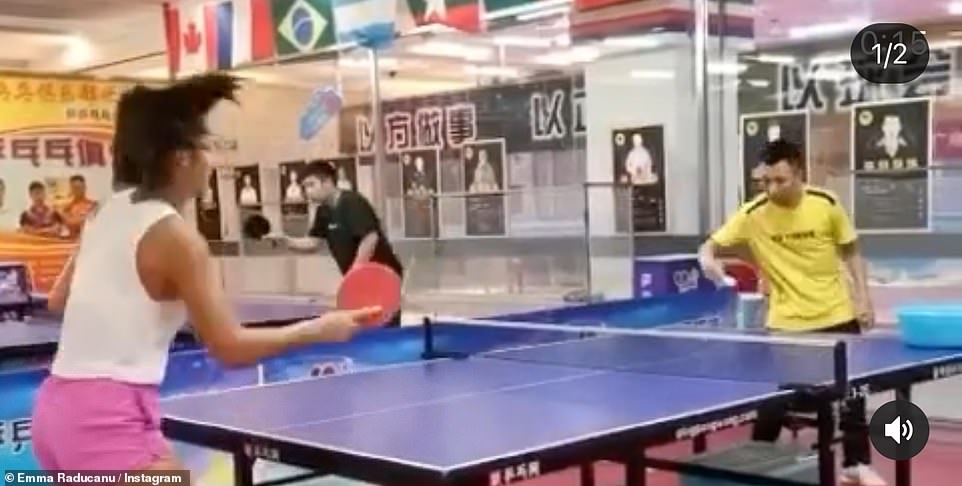 While she may be the biggest tennis star in Britain at the moment, in China Emma is better known for her ping pong skills

Pictured: Emma’s discipline and hard work have been credited with helping her to US Open final victory last night and she is always keen to share just how much hard work goes into her training regime with her fans via her social media pages

Tian Fangzheng, head of the club, described Raducanu as an ‘outstanding’ player, adding: ‘When all the other kids were tired, she was not.’

Tian told the Times Raducanu’s mother mentioned her daughter was also ‘quite a good’ tennis player.

‘You can tell she has the movements of playing tennis when playing ping pong,’ he said. ‘She picked up the sport very quickly and you can tell she’s a sports person.’

Her success in tennis has been put down to many things including her dedication and hard work but her athleticism has undoubtedly played its part.

British teammate Heather Watson commented on her sheer strength and says she has regularly been left open-mouthed at the weight she is able to lift. 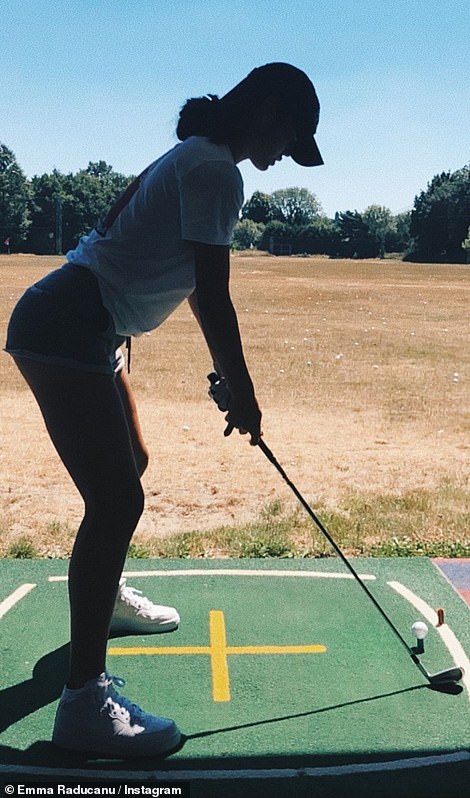 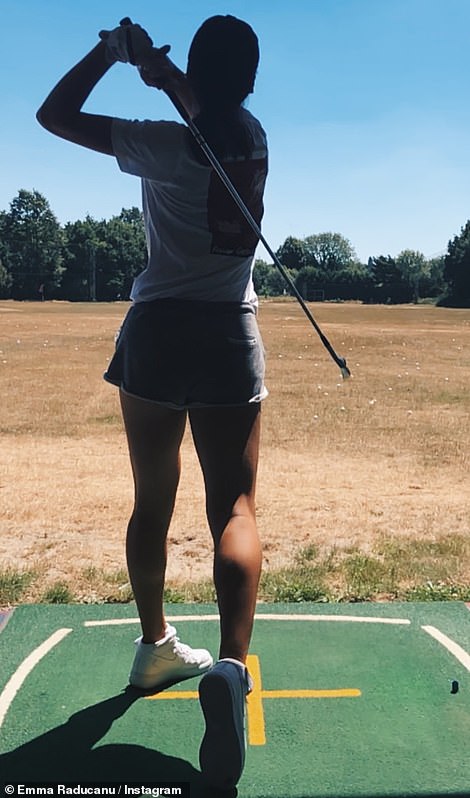 As well as tennis, motocross, and ping pong, Emma has also shown fans she knows how to swing a golf club (pictured)

The 5’9” teenager is a fan of sharing clips of her gruelling weight training on her Instagram, with Watson noting Emma can hip-thrust 200kg – something she says ‘most of the guys couldn’t do.’

Raducanu isn’t new to being compared to the boys and told British Vogue for their October edition: ‘The whole [tennis] squad I was in was all boys.

‘It was quite intimidating in the beginning to, you know, get out of my shell and actually begin to really enjoy what I was doing because I was so scared. I’m not sure of what.’

Outside of sport she has taken a keen interest in her parents’ Chinese-Romanian: she speaks Mandarin, binge-watches Taiwanese television shows, and loves nothing more than visiting paternal grandmother Mamiya in Bucharest.