The 1992 not guilty verdicts sparked one of the worst race riots in American history. 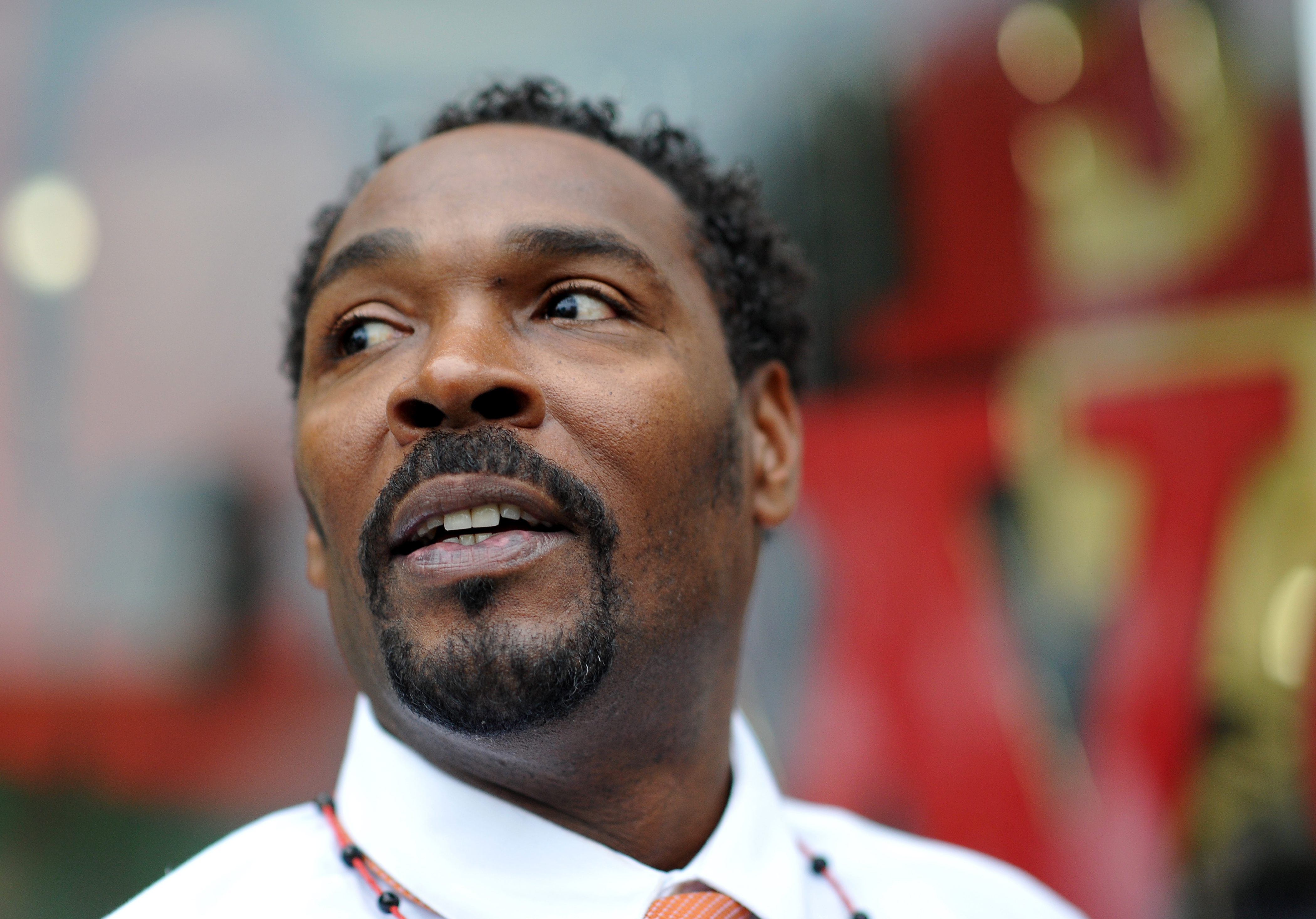 The tragic turn of events started when Rodney King, who was on parole, led police on a high-speed chase in March of 1991.

He would be charged with driving under the influence, a violation of his parole.

When he was stopped, he was beaten and repeatedly kicked by police officers. 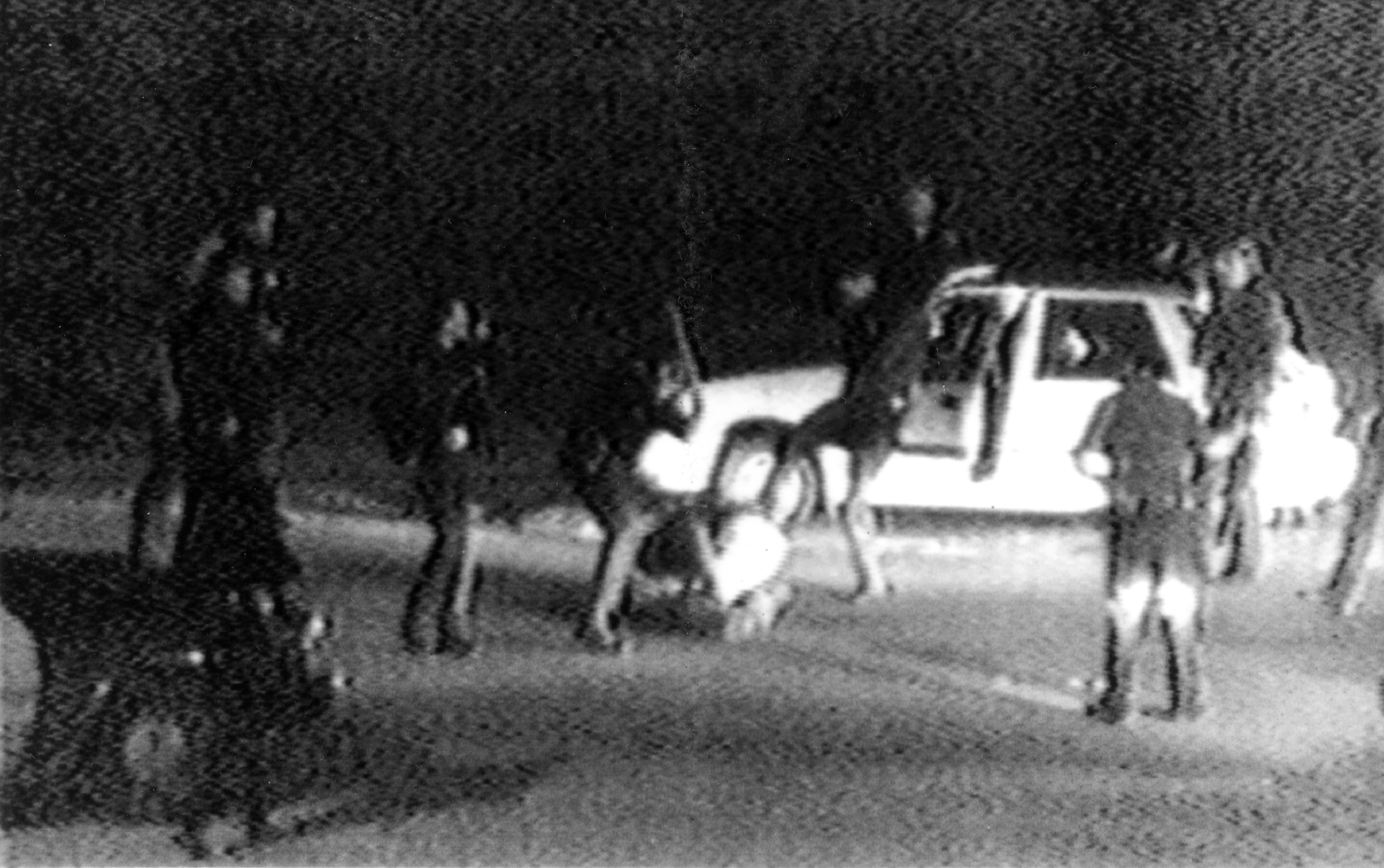 Sergeant Stacey Koon, Officer Theodore Briseno, Officer Timothy Wind and Officer Laurence Powell were all charged with excessive force, but they were acquitted.

The officers scored the legal victory even though the beating was recorded.

"When the verdict came out, it was a stunner for people coast to coast. My jaw dropped," USC law professor Jody David Armour told NPR in 2017.

"There was ocular proof of what happened. It seemed compelling.

"And yet, we saw a verdict that told us we couldn't trust our lying eyes. 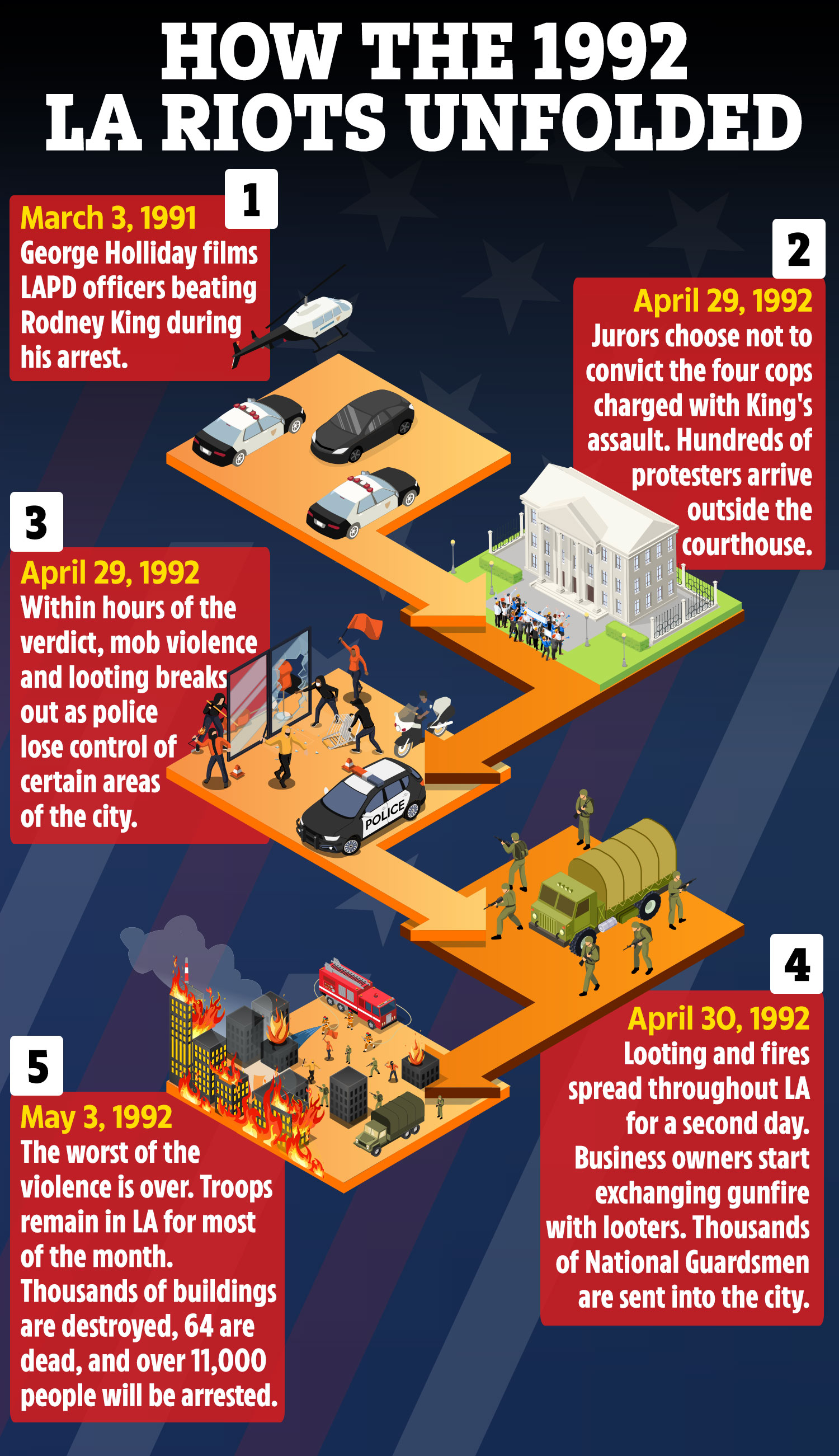 "That what we thought was open and shut was really 'a reasonable expression of police control' toward a black motorist."

At least 64 people were killed in the riots that followed, and more than 12,000 were arrested.

More than $1billion in damage was caused. 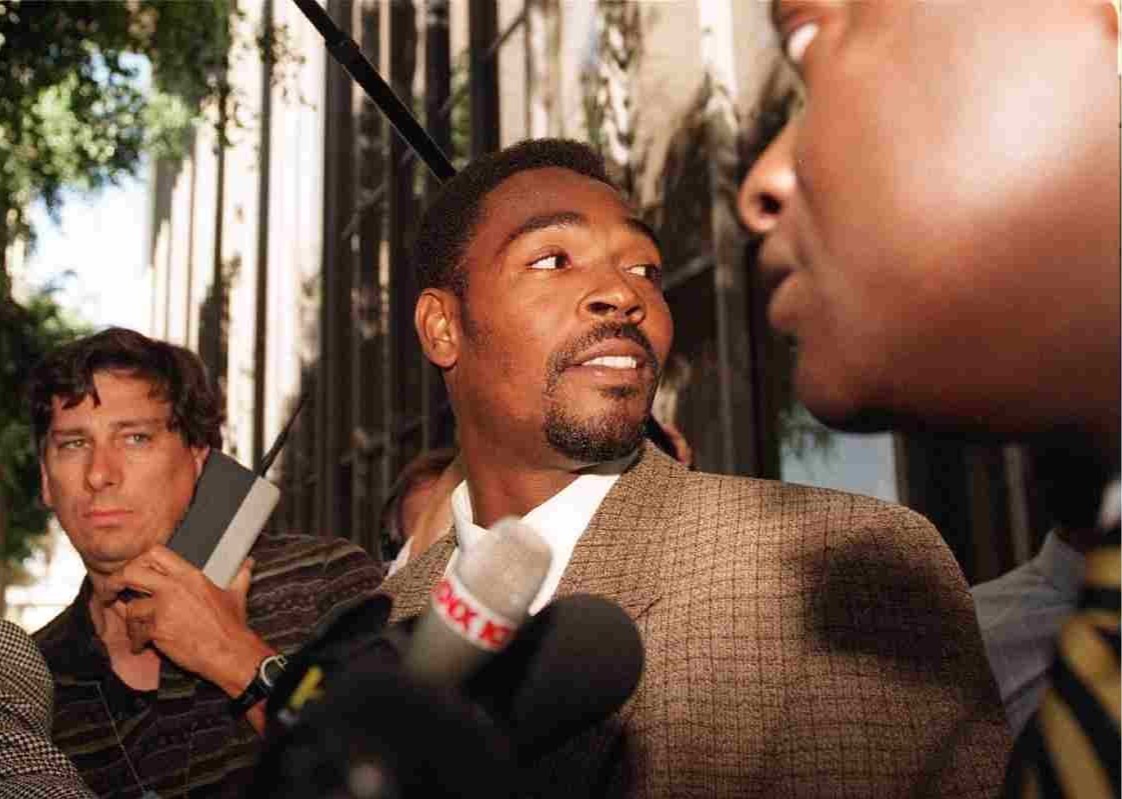 "It was an open campaign to suppress and contain the black community.

"LAPD didn't even feel it was necessary to distinguish between pruning out a suspected criminal where they had probable cause to stop and just stopping African-American judges and senators and prominent athletes and celebrities simply because they were driving nice cars."

Koon and Powell were later found guilty of violating King's civil rights and they each served 30 months in prison. All four cops lost their careers. 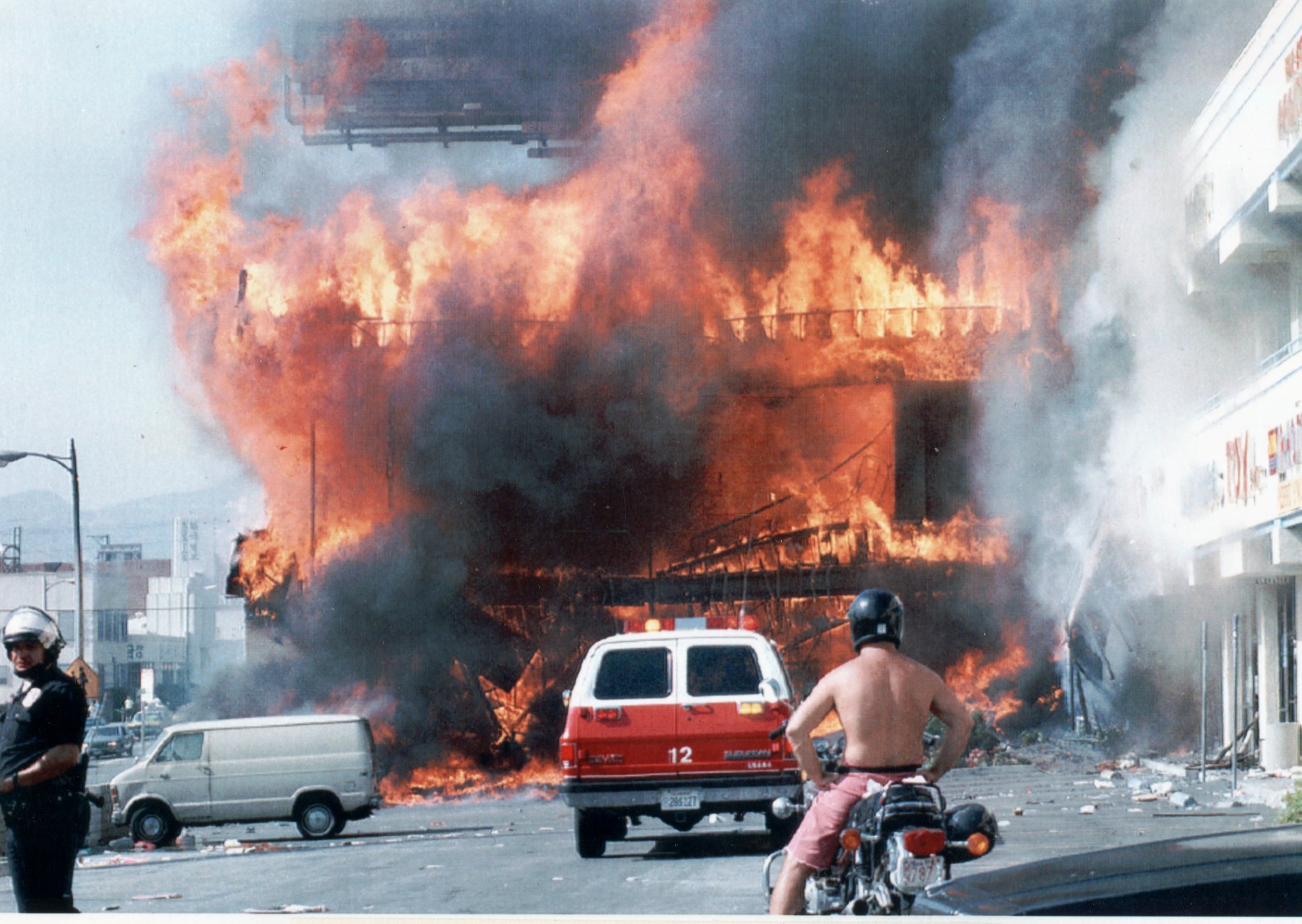 Who recorded the Rodney King video?

The video was recorded by a man named George Holliday.

The police pursuit of King had come to a stop about 90 feet away from Holliday's apartment.

“It was really loud and woke me up. I looked out the bedroom window and saw all the commotion going on, and all the police cars coming to a stop right outside," Holliday told The Sun in 2021.

“We had just bought our first video camera that we had in our home. This was before cell phones.

"And when you have a new camera, the first thing you think of is: ‘Let’s film this.'

“I grabbed the camera and went out onto the balcony. By the time I got out to the balcony, the beating was already going on.

"I put the camera up to my eye and started filming.”