Jerusalem: There’s been a rapid escalation of violence between Israelis and Palestinians after weeks of clashes and demonstrations in Jerusalem.

On Monday morning (Israel time), 300 Palestinians were injured in a police raid on the al-Aqsa Mosque compound in Jerusalem, one of the holiest sites in Islam. By the evening, militants in the Gaza Strip had fired rockets towards Jerusalem for the first time in years, and Israel responded with air strikes that killed 20 people, including nine children, according to Gaza’s Ministry of Health, and three Hamas militants, according to the Israeli military. 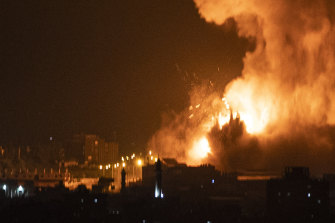 An explosion caused by Israeli air strikes on the Gaza Strip early on Tuesday.Credit:AP

A confluence of factors — some decades old, others more immediate — has contributed to the surging volatility and violence. Here’s what you need to know.

What clashes have erupted in Jerusalem in recent days?

Monday began with more than 300 Palestinians – who had come to pray at al-Aqsa Mosque in Jerusalem’s Old City during the holy month of Ramadan – injured in clashes with Israeli forces, who fired rubber bullets, tear gas and stun grenades. Confrontations between Israeli police, Palestinian protesters and far-right Jewish Israelis continued throughout the day.

The city remained tense ahead of a contentious march by ultra-nationalist Jews, which was set to pass through Palestinian neighbourhoods as part of a flag-waving Israeli holiday, Jerusalem Day. The route was to include Damascus Gate, one of the few centres of Palestinian life in the contested city. In recent weeks, Israeli forces and Palestinians have clashed over Israeli restrictions on nightly gatherings there after the Ramadan fast. 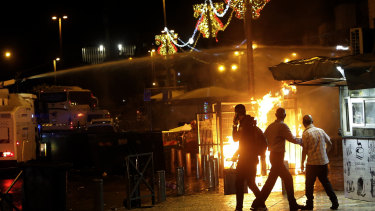 An Israeli police water cannon is deployed near the Damascus Gate to the Old City of Jerusalem as a fire burns during clashes between police and Palestinian protesters on Monday.Credit:AP

Soon before the march was due to proceed, Israeli authorities ordered it rerouted from the Damascus Gate area. Organisers called it off in protest but said participants should still gather at the Western Wall, the holiest site in the city for Jews, situated below al-Aqsa Mosque, which Jews call the Temple Mount compound.

That was around the same time that Hamas, an extremist group that controls the Gaza Strip, announced that it would fire rockets if Israeli settlers did not withdraw from al-Aqsa Mosque and Sheikh Jarrah, a predominantly Palestinian neighbourhood of East Jerusalem. That’s where Arab families are facing evictions after years of court battles waged by Israeli settlers. The area has seen nightly confrontations between Palestinians and Israeli far-right nationalists.

On Monday morning, more than a dozen tear gas canisters and stun grenades landed in the mosque, as police and protesters faced off inside the walled compound that surrounds it. Smoke rose in front of the mosque and the iconic golden-domed shrine on the site, and rocks littered the nearby plaza. Inside one area of the compound, shoes and debris lay scattered over ornate carpets. 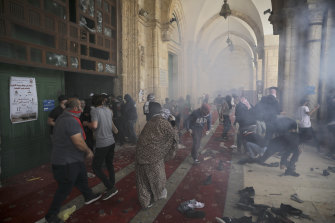 Palestinians clash with Israeli security forces at the al-Aqsa Mosque compound on Monday.Credit:AP

What’s behind the escalation?

Israeli Prime Minister Benjamin Netanyahu is fighting for his political survival after four recent deadlocked elections that have left Israel in political turmoil. He is at the helm of a caretaker government as he fights corruption charges, while opposition parties struggle to form a viable alternative government.

The Prime Minister has aligned himself with far-right politicians. Among them are Itamar Ben-Gvir, head of the extremist Jewish Power party, who has been part of the confrontations in Sheikh Jarrah and around the Temple Mount. 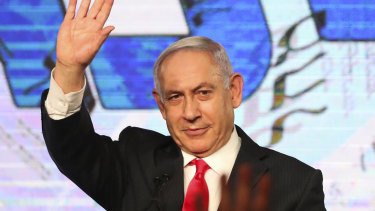 Israeli Prime Minister Benjamin Netanyahu ran out of time to form a new government last week. He is now in caretaker mode.Credit:AP

Netanyahu’s critics say tensions have in part been permitted to escalate because he was distracted by these other affairs. Reports of violence targeting Jewish Israelis and soldiers have dominated Israeli media in recent days.

For Palestinians, several recent developments have stoked fears and frustrations over the future of their demands for sovereignty and rights in Jerusalem.

In late April, President Mahmoud Abbas, head of the Palestinian Authority, which has control over some parts of the West Bank, announced he was postponing what were supposed to be the first Palestinian elections in 15 years.

In theory, the elections were to take place in the Israeli-occupied West Bank, Gaza Strip and East Jerusalem. But Abbas is at odds with Islamist militant group Hamas, which rules in Gaza, and Israel has barred the Palestinian Authority from operating in East Jerusalem, where most Palestinians are not Israeli citizens. Abbas, who was lagging in polls, blamed the cancellation on Israel, saying it had not agreed to a mechanism for East Jerusalemites to vote. 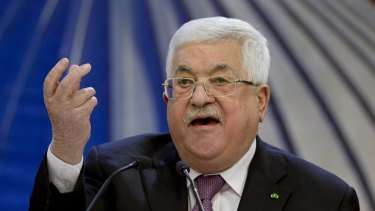 Palestinian President Mahmoud Abbas, 85, has postponed what were supposed to be the first Palestinian elections in 15 years.Credit:AP

Hamas has fought three wars with Israel and has sought to fill the political void.

The shadowy leader of its armed wing issued his first public statement in nearly seven years last week, warning Israel would pay a “heavy price” if it evicted Palestinians from their homes in east Jerusalem.

Mohammed Deif has been in hiding for more than two decades and is believed to be paralysed after surviving multiple assassination attempts. The most recent was during the 2014 Gaza war, when an Israeli air strike killed his wife and infant son, according to Hamas.

Hamas is also facing its own pressures in the Gaza Strip, which is beset by multiple humanitarian crises 14 years into an Israeli and Egyptian-led siege. 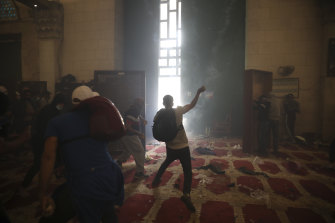 Against that backdrop, Israeli restrictions around access to the Damascus Gate and al-Aqsa Mosque, the third-holiest site in Islam, became flash points as many Palestinians gathered there to observe the holy month of Ramadan. The odour of putrid-smelling “skunk water” sprayed by Israeli security forces has lingered in parts of East Jerusalem for weeks.

Conflicts around the mosque have frequently flared up before, igniting tensions around the Middle East, but in recent days international attention has also increased around the decades-old legal battle in Sheikh Jarrah, where a group of Israelis is trying to evict mostly refugee Palestinian families from homes they’ve lived in for decades.

A final ruling by the Supreme Court was originally set for Monday – but it was postponed by Israel’s Attorney-General in an effort to de-escalate tensions.

What could happen next?

Events continue to develop swiftly on the ground but much more slowly elsewhere.

The UN Security Council held emergency consultations on Monday (Tuesday AEST) on the escalating violence and was considering a proposed statement calling on Israel to cease evictions and calling for “restraint”. Ireland’s UN ambassador Geraldine Byrne Nason said “the Security Council should urgently speak out”.

US Secretary of State Antony Blinken said the rocket attacks from Gaza against Israel should stop “immediately” and urged all sides to take steps to reduce tensions.

He met with Jordanian Foreign Minister Ayman Safadi in Washington where Safadi urged the US to play a leadership role in reducing the violence. What that role would entail is unclear.