What the midterms teach Democrats about beating Trump in 2020

New York: As the results from the US midterm elections started pouring in on Tuesday night, not even the most hardcore of political aficionados was paying attention to the Senate contest in Minnesota.

Unlike Florida – the perennial drama queen of American politics – this wasn't a "seat to watch" and the result wasn't especially close. Which, in a weird way, is why it's worth examining when it comes to drawing implications for the next presidential election from Tuesday's results.

Minnesota is a traditionally Democratic state in the upper Midwest. It's similar to states like Iowa, Michigan and Wisconsin, which all voted for Barack Obama and then swung to Donald Trump in 2016, handing him victory.

Trump also performed strongly in Minnesota and only narrowly missed out on taking the state.

On Tuesday Amy Klobuchar, who has represented Minnesota in the Senate since 2006, won 60 per cent of the vote, compared to 36 per cent for her Republican opponent. That's a more impressive margin than recorded by Democratic senators in solidly progressive states like Connecticut and Massachussetts.

Klobuchar's victory became even more impressive when you looked at the electoral map and saw her achieving something that is almost unheard for a Democrat nowadays: she won the vote in rural areas.

This got people wondering: could this be the candidate capable of bringing Trump down in 2020? 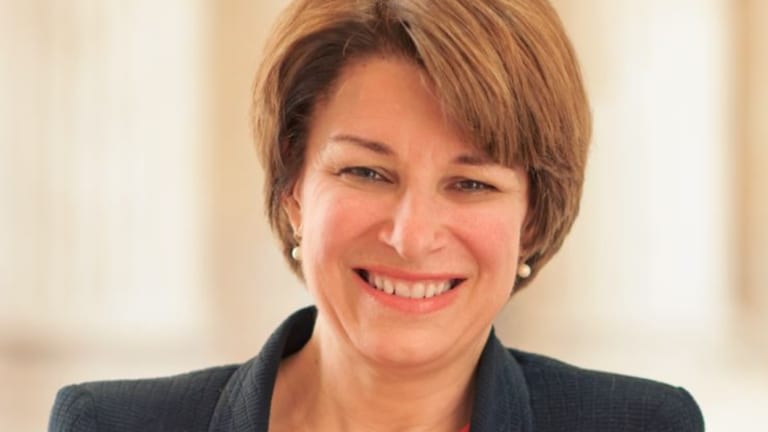 The Democrats won around 35 House of Representatives seats from Republicans at the midterms, a strong result that allowed them to claim a majority in the lower chamber.

But the party has yet to settle on a nominee or a strategy for defeating Trump in 2020. And that is causing considerable heartburn on the Left.

"The Democrats would be wise to nominate someone like Amy Klobuchar," says political strategist Hank Sheinkopf, who has worked on campaigns for Bill Clinton and former New York City mayor Michael Bloomberg.

"She's a star. She comes from the heartland of the country so no one can call her an eastern elite. She can appeal to both the progressive and moderate wings of the party. It's good that she is a woman and that her last name isn't Clinton."

Democratic pollster and strategist Celinda Lake agrees: "She is personable, she's warm, she would be really popular in a place like Iowa."

Klobuchar's policy positions are centre-left but she's not a firebrand or a radical. Her brand of politics is persuasion, not firing up those who already agree with her.

On the eve of the midterms she appeared on The Late Show with Stephen Colbert – the ideal place for a potential presidential nominee to raise their profile. She talked about putting "decency" back into politics and the importance of bipartisanship.

"My advice to anyone going in politics is to respect other people," she said. "To be willing to find that common ground. To understand that courage isn't just standing in the corner of the boxing ring throwing insults. That courage is being willing to stand next to someone you disagree with as well as someone you agree with. That's how we're going to win the Midwest."

While Klobuchar has many strengths, strategist Celinda Lake says she has a weakness: "She is not someone who is going to excite people and create a movement."

In other words she is not someone like Beto O'Rourke.

On Tuesday night, as Klobuchar's Senate victory was being ignored, the cable news networks were focused on Texas, where three-term Democratic congressman Beto O'Rourke was challenging Republican Ted Cruz.

O'Rourke was the breakout star of the midterm elections, a handsome, 193-centimetre, Kennedy-esque figure who used to play bass in a punk rock band. He set so many progressive hearts aflutter across the country the phenomenon became known as "Betomania". 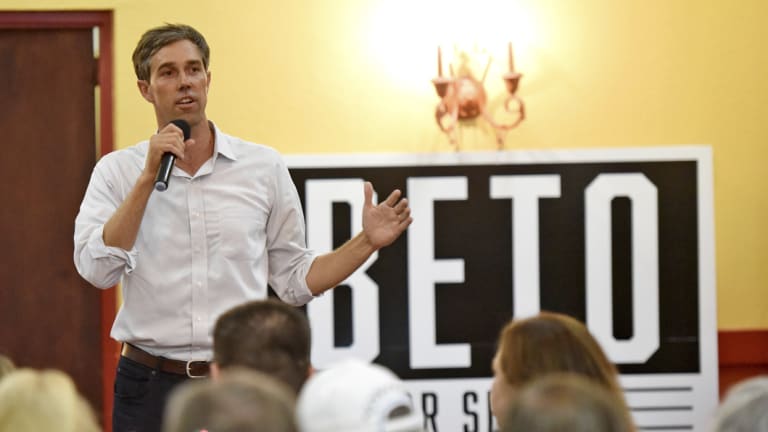 Democrat Beto O’Rourke narrowly missed out on winning the Texas Senate seat but became a national star during the campaign.Credit:Reporter-Telegram

During the campaign he raised an extraordinary $US70 million, all of it from small individual donations and much of it from outside Texas.

Texas hasn't sent a Democrat to the US Senate in 30 years, and it had long been assumed that only a centrist, or even conservative, candidate stood a chance of winning there.

O'Rourke threw conventional wisdom out the window by running a stridently left-wing campaign. And not just on policy but on divisive cultural issues that Democrats like Klobuchar try to avoid.

O'Rourke campaigned on a platform of "Medicare for all", putting more restrictions on gun ownership and on impeaching Trump. When asked by a military veteran about NFL players kneeling during the national anthem in protest at racial injustice, he said: "I can think of nothing more American."

And he almost won.

O'Rourke won 48.9 per cent of the vote in Texas – way up on what previous Democratic candidates have achieved.

If Klobuchar's brand is persuasion, O'Rourke's is motivation: trying to mobilise support among progressives who may otherwise stay at home or may not even be registered to vote. To offer them "a choice, not an echo", in the famous words of conservative political icon Phyllis Schlafly. 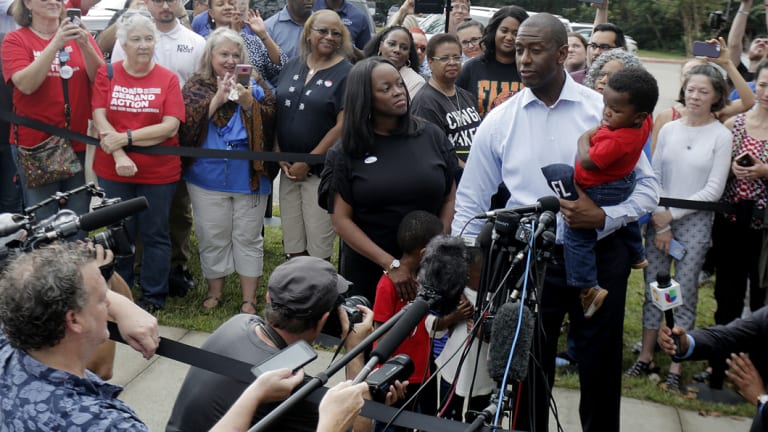 The motivation approach was also attempted by Andrew Gillum and Stacey Abrams, the Democratic nominees for governor in Florida and Georgia respectively.

Like O'Rourke, they became national celebrities during the midterms. Oprah Winfrey travelled to Georgia to campaign for Abrams and Obama held a rare rally in Florida for Gillum (both were aiming to become their states' first African-American governors).

Gillum and Abrams both outperformed their Democratic predecessors thanks to a surge in support from young and non-white voters. But, like O'Rourke, they appear to have fallen just short of victory. 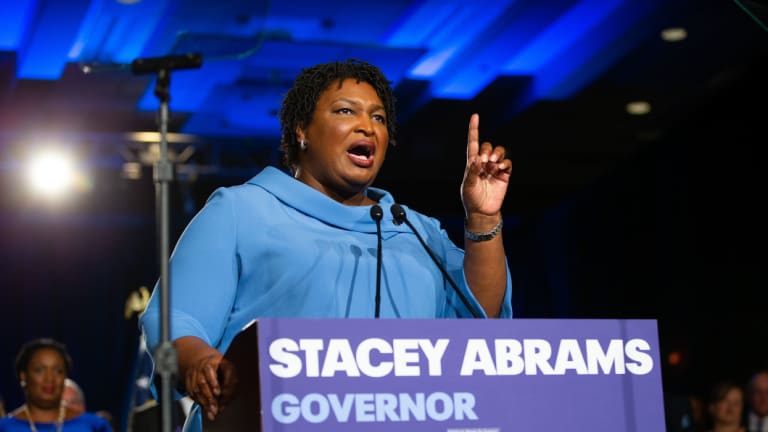 When it comes to 2020, Sheinkopf believes persuasion, not motivation, is the Democrats' best bet to beat Trump. His personal favourite for the nomination is Joe Biden, the former vice-president who has strong appeal to working-class white voters.

"Americans are so energised they could use some Novocaine," he says, pointing to the enormous turnout at the midterm elections. "The Democrats don't need energy. They need someone reasonable, pragmatic, someone from the centre-left who can't be painted as crazy."

Lake doesn't disagree, but believes a more moderate candidate like Biden or Klobuchar may struggle in the primaries.

"There are going to be 15 to 20 candidates and it is going to be hard to stand out," she says.

The Democratic base is increasingly left-wing and wants a candidate who will repudiate everything Trump stands for.

“When they go low, we kick 'em," former attorney-general Eric Holder recently said. "That’s what this new Democratic Party is about."

In this climate, Lake says a more ideological figure like Bernie Sanders or Elizabeth Warren is most likely to win the Democratic nomination, even if a pragmatic persuader may have a better shot at winning the general election.

Speaking at the White House the day after the midterms, Trump told reporters the results were "very close to complete victory" for Republicans. Brushing over the losses in the House, he focused on the fact his party had picked up Senate seats in North Dakota, Missouri, Indiana and Florida.

The main lesson, he said, was "that people like me".

"The midterms point to real problems for the President in 2020," he says.

"There is no evidence that he has expanded his voting coalition from the 2016 election. If anything, it has gotten smaller."

In 2016 Trump lost the popular vote by 3 million people but won the electoral college because of narrow victories in Michigan, Wisconsin, Iowa and Pennsylvania.

And Republicans fared poorly in these states at the midterms. Democrats picked up House seats in all these states, held on to their Senate positions and won governorships in Michigan and Wisconsin. 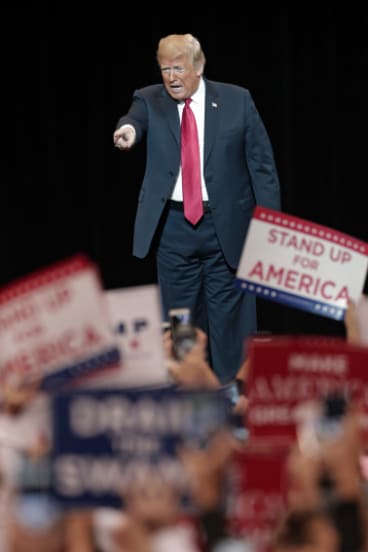 Donald Trump, the master of distraction.Credit:AP

The first, which he called the Northern Path, focuses on winning back states in the Midwest where white working-class voters dominate. The second, which he calls the Sun Belt Strategy, is based on winning enough electoral college votes in increasingly diverse southern states such as Arizona, Georgia, Florida and Texas.

"Tuesday night’s results suggest that the Northern Path is still the path of least resistance for a Democrat hoping to win the Electoral College," he wrote. "If Trump has lost the benefit of the doubt from voters in Pennsylvania, Wisconsin and Michigan, he may not have so much of an Electoral College advantage in 2020."

Although Florida was a disappointment for Democrats on Tuesday, Mellman says there is reason for them to be hopeful of winning the Sunshine State in 2020.

Thanks to a successful ballot initiative, 1.4 million ex-felons will now be allowed to vote in Florida. Because so many of them are African-American, it is assumed their votes would flow strongly to the Democrats.

Lake says the Democrats' strong performance with suburban and female voters on Tuesday is a good sign for 2020, but that the party has no reason for overconfidence.

"Donald Trump showed he can mobilise his base and that is a warning for us," she says.

"Healthcare was the big issue this year but in 2020 it will be the economy and we are behind on that. We need someone who has a powerful economic vision and voice, otherwise we are not going to win."

Sheinkopf agrees. "Donald Trump is the master at creating waves, causing distractions and putting his opponents on the defensive. Anyone who underestimates him is a fool."