Where did the second wave of Covid hit the hardest?

Where did the second wave of Covid hit the hardest? Hastings in Sussex saw 19 TIMES as many coronavirus deaths in January than it did during darkest spell of outbreak last spring

More than half of local authorities in England and Wales were hit harder by the pandemic in January than at the peak of the first wave, official figures reveal.

Office for National Statistics (ONS) data shows 54 per cent – 182 out of 336 – registered more deaths from Covid in the first four weeks of this year than between March 28 and April 24 last year.

East Sussex suffered the biggest hit, with three of its five local authorities in the top ten worst affected. These included Hastings, where Covid fatalities surged 19-fold, and Eastbourne, where they leapt four-fold.

Norfolk faced the second-biggest toll after two of its seven councils were also on the list, with Norwich seeing Covid deaths spiral eight-fold, and Broadland recording a three-fold spike.

Experts said the figures painted a picture the ‘huge difference’ in how the virus struck across England and Wales today, adding it appeared some places had ‘got off lightly’ in the first wave only to be pummelled by the second.

ONS data also showed almost 29,000 deaths linked to Covid-19 were registered during the periods of both the first and second waves considered, revealing the uneven pressures faced by people living in different areas.

It comes after Britain today recorded another 12,364 coronavirus cases, a 27 per cent drop on the same time last week, and a further 1,052 deaths from the virus. 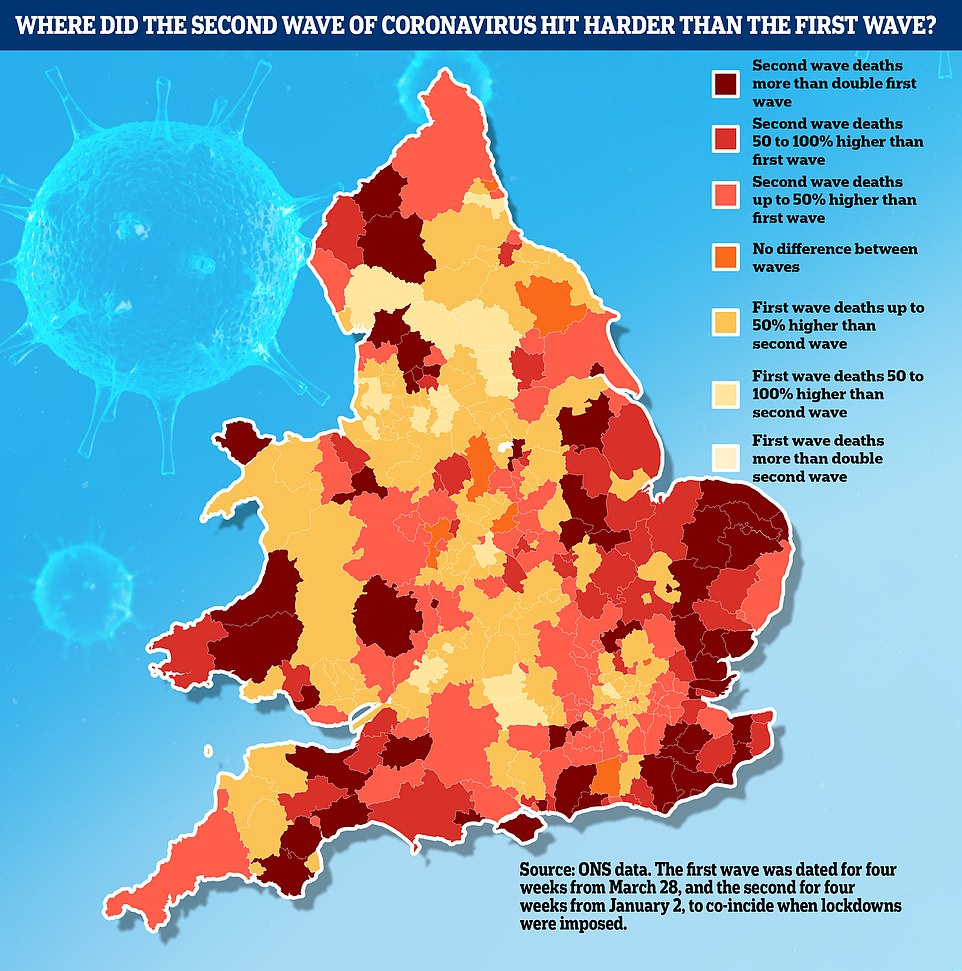 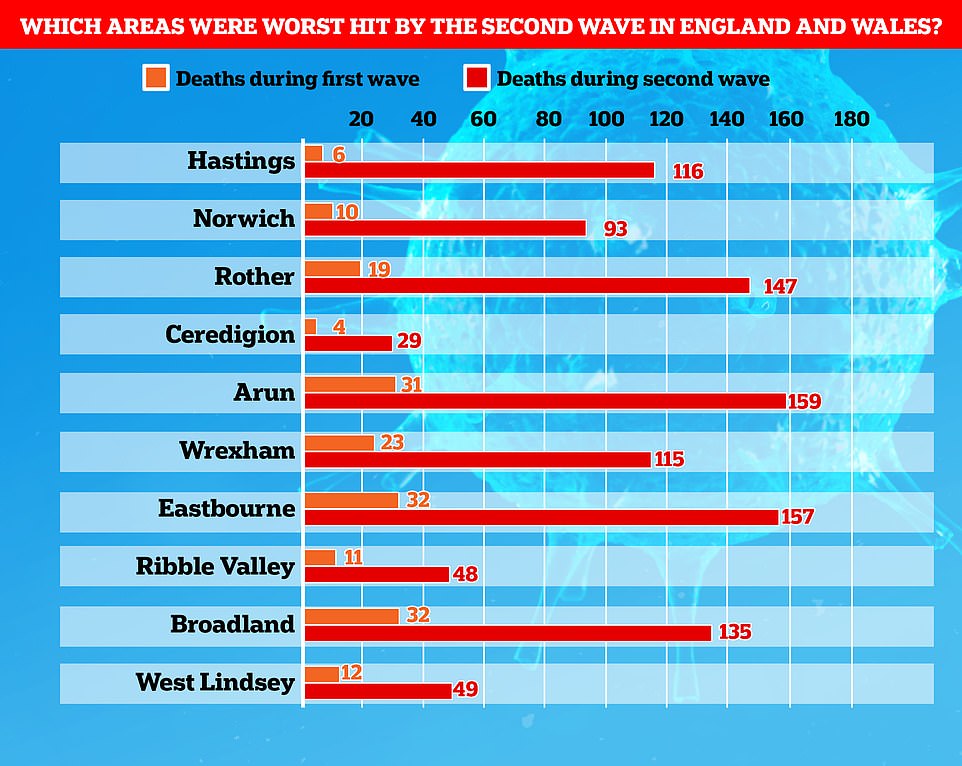 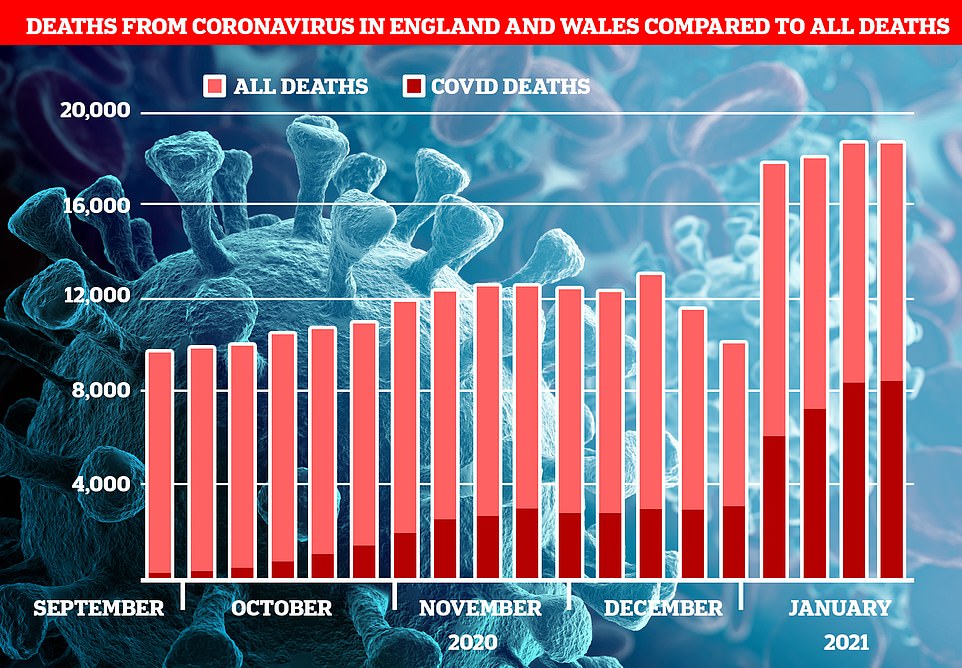 WHICH AREAS WERE WORST HIT DURING THE SECOND WAVE?

Hastings and Norwich suffered the biggest hits from the second wave, after Covid deaths in these areas jumped from six to 116 fatalities and 10 to 93 respectively.

Rother, in East Sussex, faced the third worst impact after Covid deaths jumped seven-fold from 19 to 147.

Of the 56 local authorities where Covid-19 deaths in the second wave were at least double that in the first, 15 were in the South East and 16 were in the East of England.

The focusing of the impact in the South is likely to be down to the more infectious Kent variant, scientists say, which spread rapidly in the run-up to Christmas.

It has a key mutation – N501Y – which is thought to allow the mutant virus to jump between humans more easily, sparking more infections.

These will inevitably lead to more Covid deaths, because more people will catch the virus and – with a death rate of one per cent in all those infected – a higher number will sadly die from the disease.

Top scientists have also warned the strain – dubbed B.1.1.7. – is slightly more deadly, but they say as this accounts for less than 15 additional Covid deaths for every 1,000 its effect is minimal.

Nonetheless, hotspot London had just one borough – Kingston-upon-Thames – in the top 56 where the impact of the second wave was double that of the first, despite the variant being more widespread.

Experts said the smaller impact on the capital could be linked to higher levels of immunity, as more residents there caught the virus in the first wave and hence have some protection from it.

But they added it may also be connected to the impact of the first wave on the city, which was hit hard in April.

The ten areas that suffered the biggest the most fatalities in the first wave were in the North of England, ONS data shows, after the virus gained a foothold in these places.

In Craven, North Yorkshire, deaths were also three-fold higher in the first wave at 38 compared to 14 in the first four weeks of January.

WHICH AREAS WERE WORST HIT DURING THE FIRST WAVE?

As many as five of the top ten worst affected places in the first wave were in the North East and Yorkshire, with four in the North West and one in the South West.

It wasn’t clear why this was the case, although experts have previously pointed to months of tougher restrictions in the regions compared to the rest of the country to explain a lower death toll.

They said that these kept the lid on cases for longer, leading to fewer infections and hence fewer deaths.

It was also possible that the first lockdown blocked the virus from spreading to many rural areas in the first wave, but that it managed to reach these places by the second.

They add that the more infectious variant of Covid-19 was not widespread in the North before the third lockdown was imposed, which would also lead to a smaller number of deaths.

Professor Kevin McConway, a statistician at the Open University, told MailOnline the figures revealed ‘huge differences’ in the peaks of the first and second waves across England and Wales.

‘The fact that there are quite a few local authorities that had far more deaths in January than last April, and none that had that pattern the other way round with far more deaths in April than January, relates to the spread of the disease across the country in the two peaks,’ he said.

‘Last April, quite a few areas of England and Wales got off relatively lightly in terms of deaths.

‘That particularly applied to Hastings and Norwich and Rother, but also to quite a lot of other places, particularly in the more rural parts of the country.

‘Overall in the South and East of England, in places there that are far enough away from London, deaths tended to be low in the first wave.

‘But in the current wave, the horrible disease has spread itself more widely and, to some extent, more evenly.

‘The more infectious new variant made sure that numbers of deaths over large parts of southern and eastern England were considerably higher than last April, but deaths also remained high in several areas in other parts of the country where they had already been quite high last spring.’

The four weeks after January 2 were chosen for the second wave because these were just after England’s third national lockdown was declared on January 4.

And the four week from March 28 were chosen for the first wave because these were just after the first national lockdown was declared on March 23. A lag of a week was given to ensure both peaks were comparable. 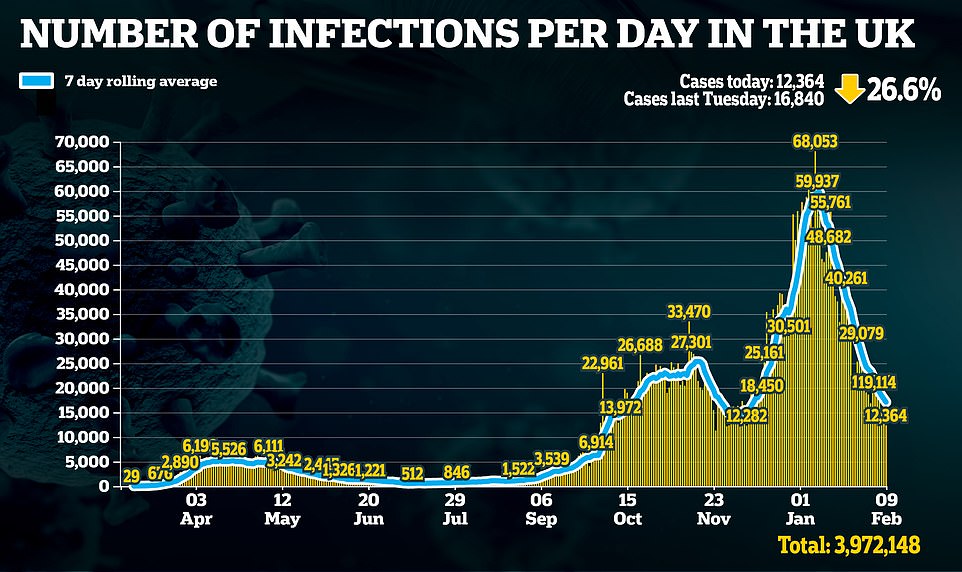 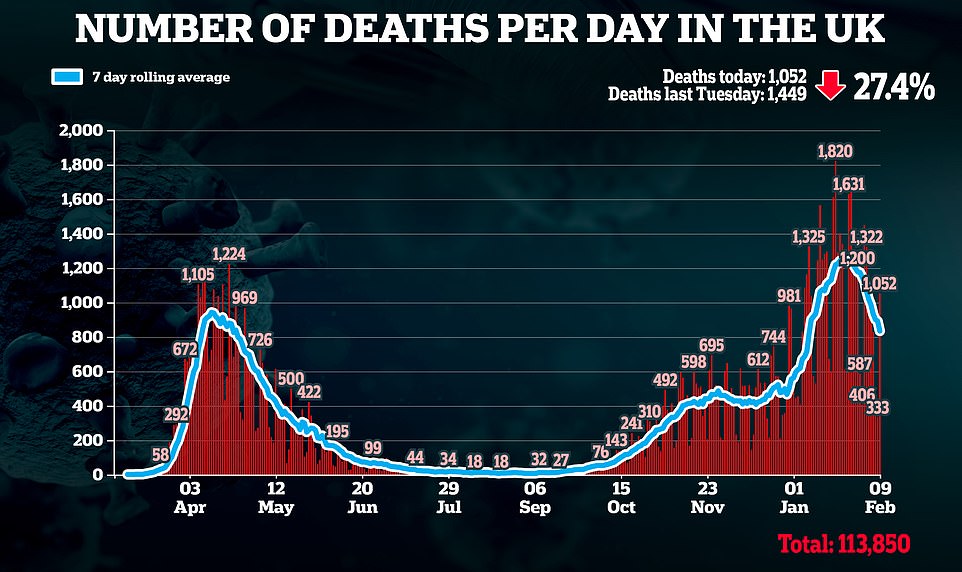 It comes after furious Tories savaged Matt Hancock over a ‘forever lockdown’ today after the Health Secretary warned border restrictions may need to stay until autumn — despite figures showing the UK’s epidemic is shrinking.

Lockdown-sceptic backbenchers took aim at Mr Hancock when he unveiled the latest brutal squeeze aimed at preventing mutant coronavirus strains getting into the country.

The Department of Health announced 12,364 more coronavirus cases and 1,052 deaths in the past 24 hours as the winter wave continues to shrink because of lockdown.

Both figures have dropped by more than a quarter compared to last week, with today’s infections down 26.6 per cent on last week’s figure and deaths by 27.4 per cent. The number of Covid patients in hospital has also fallen by a fifth in a week, with nearly 27,000 beds now taken up by Covid sufferers.

The DoH also revealed another 356,291 coronavirus jabs were administered yesterday, with 12.6million Brits having now received their first dose. With six days still to go, No10 is within touching distance of delivering on its target of injecting the 15million most vulnerable by February 15.

But hopes the world-beating vaccine roll-out will mean lockdown curbs can be significantly eased any time soon were shot down today by Mr Hancock, who unveiled the latest suite of border curbs, which he warned could last until the Autumn when booster vaccines will be available.