While Indonesia burns, the people want to know Jokowi is listening

Jakarta: On October 20, Indonesian President Joko Widodo will finally be sworn in and begin his second and final term in office, six months after winning re-election.

"I have nothing to lose," he recently declared, promising much-needed reforms including corporate tax cuts, an easing of strict employment laws and measures to lift foreign investment.

But since being re-elected the president has made a series of mis-steps and ill-advised decisions that have invited questions about his judgement.

Most obvious is his decision to create a new national capital city on the island of Borneo, in East Kalimantan province, a $48.4 billion non-solution to one of the country's most intractable problems: Jakarta. 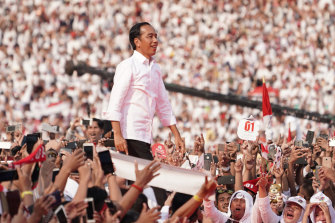 Joko Widodo’s rode a wave of hope to a second presidential term.Credit:Bloomberg

Pollution in the capital has been so bad in recent months that Jakarta has had some of the worst air quality scores in the world.

While the city's citizens are warm, welcoming and good humoured, Jakarta is over-crowded, traffic-choked and incredibly vulnerable to climate change. Parts of northern Jakarta are sinking by as much as 25 centimetres per year.

But moving the capital is not the solution. Shifting two million citizens, when greater Jakarta is home to 30 million people, will hardly make a dent. Budget blow outs are inevitable, thousands of hectares of virgin forests will be destroyed and it's debateable whether the country can afford it.

A massive power failure in August across much of the main island of Java left 50 million people without power for hours. Jokowi wagged his finger at PLN, the state power company, but not much has been done to reform the country's creaking state-owned enterprises.

In the last month, civil society groups have been up in arms over laws that will weaken the country's much-respected anti-corruption commission (the KPK) and sweeping, draconian revisions to the country's penal code which would make sex and cohabitation outside marriage, spreading communist ideology and insulting the president illegal (to name but a few changes) have been advanced.

The KPK law changes are particularly egregious and were rushed through the current parliament in its last three weeks.

It's hardly a coincidence that corrupt politicians, a regular target for the KPK, want to hobble the body. 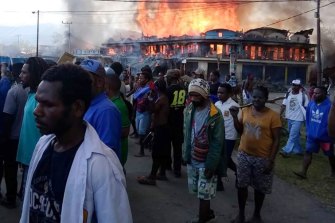 Dozens were killed during a violent protest in Wamena, Papua province.Credit:AP

Amid mounting public pressure and protests, Jokowi caved in and asked the parliament to halt its rush to pass the revised criminal code last Friday. Tens of thousands of people have stayed on the streets to protest, however.

It now looks like the president, widely known as Jokowi, could cave in, again, and issue a perpu to block the legal changes to the KPK – which he had already waved through – thus sacrificing more political capital.

That it has taken the president so long to (possibly) arrive at such an obvious course of action suggests he hasn't been paying attention, has been badly briefed, or is beholden to a parliament that could block his second term agenda.

While discontent has grown, huge forest fires have swept through Kalimantan and Sumatra, blanketing parts of Indonesia, Malaysia and Singapore in thick smoke.

Meanwhile Papua burns, with dozens of people killed in deadly riots over the last month in the restive provinces.

Jokowi, to his credit, has actually visited Papua and West Papua several times and had infrastructure built. But the riots indicate his "peace through investment" approach has had limited success.

And this is just in the last few months.

Back in January, there was an outcry and humiliating backflip over the early release of radical Islamic cleric Abu Bakar Bashir, the spiritual leader of Jemaah Islamiah, the group that carried out the 2002 Bali bombing.

The president has not kept his first term promise to resolve human rights violations dating back to the communist purges of the mid-1960s and the post-Soeharto 1998 riots.

He has pandered to Islamists at times and dropped his former ally Ahok – the ethnically-Chinese, Christian former governor of Jakarta – like a hot potato when he was put on trial and convicted of blasphemy. 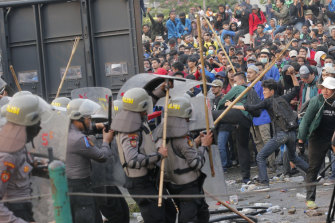 Student protesters throw projectiles at riot police outside the parliament building in Jakarta, Indonesia, on Tuesday.Credit:AP

The deadly riots following the official declaration of his election victory in May and the heavy-handed police response – Amnesty says protesters were tortured – have led to no significant sanctions.

Progress on opening the economy to much-needed foreign investment in his first term has been limited.

The president has delivered major investment in infrastructure in his first five years, from new air and seaports, highways and (finally) an underground metro rail in Jakarta. But his focus on the economy has arguably been too narrow, and he frequently steps in to solve broader problems only at the last minute.

Of course no one person can "fix" a country or be reasonably held responsible for all its ills.

But Jokowi – who is not of the political, economic and military establishment that has run this country for decades – is a symbol of hope for tens of millions of Indonesians.

And before his second term has even begun, he has done severe political damage to himself and disappointed tens of millions.

A friend suggests two words, synonyms, to describe Jokowi. One is bebal.

"It means you tell someone something over and over but he does not listen."

The other is ndableg, an old Javanese word which means stubborn.

Indonesia deserves a president who is a little less stubborn and who listens to the people a little more – not the vested interests who have run this country for decades.