Whitten Oval could soon be converted into one of Melbourne’s first mass coronavirus vaccination hubs under a proposal that would see the sporting stadium in the city’s west host thousands of Victorians for immunisation.

Medical groups recently visited the West Footscray oval, home to AFL club the Western Bulldogs, finding it had optimum air flow and was close to health services, making it an ideal location for a vaccination centre. 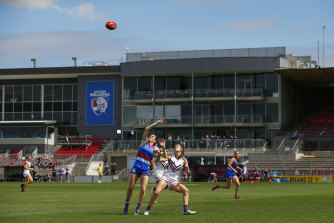 Whitten Oval could soon be converted into one of Melbourne’s first mass vaccination hub under a proposal that would see the sporting stadium used to help deliver the coronavirus jab to thousands of Victorians.Credit:Daniel Pockett

Mukesh Haikerwal of the Australian Medical Association, who is leading discussions around setting up the hub, estimated the stadium could allow for about 450 people to be vaccinated per hour.

His highly successful coronavirus respiratory clinic in Altona North, also in the western suburbs, is soon being converted into a vaccine clinic with a plan to vaccinate 16 people per hour.

Once his vaccine clinic is proven to be safe, Dr Haikerwal wants to apply the same methodology to Whitten Oval, on a bigger scale, allowing for hundreds of Victorians to be vaccinated at the same time while remaining safely socially distanced.

Under preliminary plans, three out of the five stands at the stadium would be converted into vaccine pop-up clinics. Those receiving the vaccine would be spaced out across the oval’s 19 rows of seats. 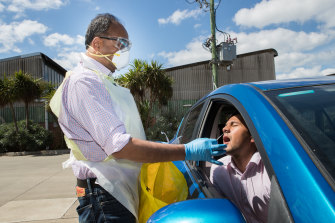 Dr Mukesh Haikerwal swabs a patient for COVID-19 in their car.Credit:Jason South

Dr Haikerwal anticipates about 150 people an hour could be inoculated in each stand, with roughly 20 minutes allocated for each vaccination. Each football stand would be carefully sanitised before the next group of people enter.

Dependant on demand for the vaccine, a fourth stand at the oval could also be converted into a vaccine hub, allowing up to 600 people to get vaccinated each hour.

“We estimate we could safely socially distance between six and eight people per bench,” Dr Haikerwal said.

“We have had exploratory conversations with Western Bulldogs Football Club and the state government and the football club has said they would be absolutely thrilled to be able to help the community. The big question now is how can we make that happen? And, then, of course, how can we replicate this in other places?”

It is proposed that Whitten Oval could be used as a pilot for the rest of the state with other stadiums and mass vaccine sites, such as sporting ovals and car parks, modelled on it.

As well as having teams of doctors and nurses on site, Dr Haikerwal said Whitten Oval had access to an on-site St John’s Ambulance team and a defibrillator.

“You’ve got access to an ambulance almost immediately if you need it,” he said.

He was also in discussions with nearby Hobsons Bay, Maribyrnong, Brimbank and Wyndham councils who had expressed interest in assisting with the mass vaccination program.

The Whitten Oval proposal has the backing of Royal Australian College of General Practitioners president Karen Price, who said GPs, along with nurses, would play a critical role in helping to run mass vaccination hubs.

”The idea is to get as many people vaccinated as quickly as possible, especially those vulnerable cohorts,” Dr Price said.

Professor Allen Cheng, a leading adviser to the federal government, has previously predicted there could be cases of serious allergic reactions during Australia’s vaccine rollout. He said Australia could expect to see about one case in roughly every 100,000 people vaccinated.

From Monday hospitals will be relied upon to deliver the Pfizer vaccine to priority groups due to the requirement for ultra-cold storage.

Hotel quarantine staff will be the first people in Victoria to be immunised against coronavirus with the Pfizer vaccine, followed by high-risk healthcare, disability and aged care workers and residents.

The Austin, Western and Monash health services will lead the vaccine response in Melbourne, while six centres will be set up in public regional hospitals across Ballarat, Bendigo, Geelong, Albury-Wodonga, Sale and the Latrobe Valley.

Most of the adult population will be offered the locally manufactured Oxford-AstraZeneca vaccine, which will be delivered in two doses.

Infectious diseases expert Professor Ben Cowie, who is leading the Victorian Health Department’s vaccine rollout, said on Thursday mass-vaccination sites and mobile testing facilities were under consideration “to really try and get this vaccine into as many Victorians as possible.”

He told a Victorian Chamber of Commerce and Industry forum that up to 80 per cent of GP clinics in some areas had expressed interest in administering doses.

”You don’t get to choose,” he said.“The vast majority of us are going to get AstraZeneca. If they’re getting it at their local GP, their pharmacy, their local health service, community health, their local government – that’s all AstraZeneca.“

Dr Price said it was extremely important that the public received information and was given the opportunity to ask questions about AstraZeneca vaccine, which is thought to be completely effective in preventing people falling seriously ill or dying from coronavirus.

“We need to prevent severe disease, hospitalisation and death,” she said. “Each of the vaccines that have been approved for use in Australia are equally efficacious at that.”

“At the moment those discussions are very much about facilitating what resources may be required, what sites may be required [and] giving the state government a full picture of what type of assistance local government may be able to provide,” she said.