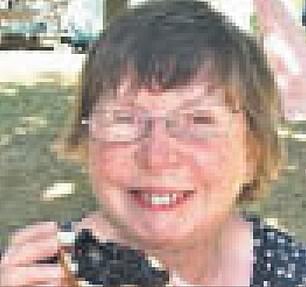 Dorothy Ashworth is said to have refused medication, food and fluids after mistakenly believing her family had abandoned her due to Covid restrictions on visits

A devastated widower says his wife ‘died of despair’ in a care home after thinking she had been abandoned by her family because of coronavirus restrictions.

Steven Ashworth, 73, said that his wife Dorothy refused fluids, food and medication after spending seven weeks in virtual isolation because lockdown measures meant visitors were banned from visiting the hospital where she was being treated for a brain injury or the care home she was transferred to.

Over the near two-month period, Mr Ashworth says he was only able to spend half an hour with his wife before being allowed to see her at the end of her life and hold her hands by which time she was unresponsive.

He says the only other visitor she was allowed during that time was her son, who he says only had minimal contact.

His wife of 47 years died in a care home in Stockport, Greater Manchester, on August 5.

Mrs Ashworth’s brain injury meant she struggled to understand why there were restrictions, her husband says.

Speaking to The Times, Mr Ashworth said: ‘She actually died of despair because she thought she had been abandoned.

‘She couldn’t have known why I wasn’t allowed in. She must have felt abandoned and I’m sure so many others are feeling exactly the same.

‘On the day she died, the GP told me that Dorothy had exercised the only choice available to her — she had refused all fluids and medication. She chose to end her life in total despair.’

She was allowed minimal contact with her son and then she was transferred to a care home where she was put in quarantine as a new arrival.

Mr Ashworth said he had only half an hour with her over the seven-week period, which was on the day she was transferred.

He added: ‘The next time I saw her was the day she died.

‘Dorothy took her own life because she was put in isolation. I don’t care what you put on her death certificate. She didn’t have Covid but she died because of it.’

A spokesman for the Stockport NHS Foundation Trust said: ‘We are very sorry for anyone who has been unable to visit their loved ones in hospital, which has been necessary to help stop the spread of coronavirus and to save lives.’

Restrictions on Covid-19 is leading to extremely high death rates in people with Alzheimer’s, dementia and other brain diseases.

ONS figures in July also showed that 50 per cent of all Covid-19 deaths in care homes also had dementia.

According to the study, 97 per cent of care homes have been closed to visitors.

Over the past eight months, relatives have been unable to hug their relatives or even hold hands.

Instead they are only allowed to wave through a window or plastic screen and some care homes have only provided ‘drive-through’ visits while some haven’t been able to see their loved ones at all.

Campaigners have warned of deaths through ‘loneliness and lack of love’ as the physical health of many of the country’s 411,000 care home residents has sharply deteriorated. Drake Calls Out Grammys for Snubbing The Weeknd, Says the Awards Show Has Lost It’s Relevance
We and our partners use cookies on this site to improve our service, perform analytics, personalize advertising, measure advertising performance, and remember website preferences.Ok