Winston Churchill artwork is sold for £8m by Angelina Jolie

Winston Churchill artwork is sold for £8m by Angelina Jolie: Oil painting of Marrakesh made by PM after agreeing tactics with US President Roosevelt during WWII sells for record amount

The painting, which is called ‘Tower of the Koutoubia Mosque’, sold at London auction house Christie’s for a staggering £8.3million.

It was completed after the 1943 Casablanca Conference, where Churchill and Franklin D Roosevelt planned the defeat of Nazi Germany – and was later gifted to the US President as a memento of their trip to Marrakech.

Prices for Churchill’s work have gone up in recent years, with his painting of goldfish at his Chartwell home selling for £1.8million at a Sotheby’s sale in 2014.

The image of the 12th-century mosque in Marrakech at sunset, with the Atlas Mountains in the background, was sold by the Jolie Family Collection, but the buyer – reportedly Belgian – was not immediately named.

The same client bought all three Churchill paintings in tonight’s sale, including ‘Scene at Marrakech’ (c. 1935) for £1.8million and ‘St Paul’s Churchyard’ (c. 1927) for £1million – all well above their estimates. 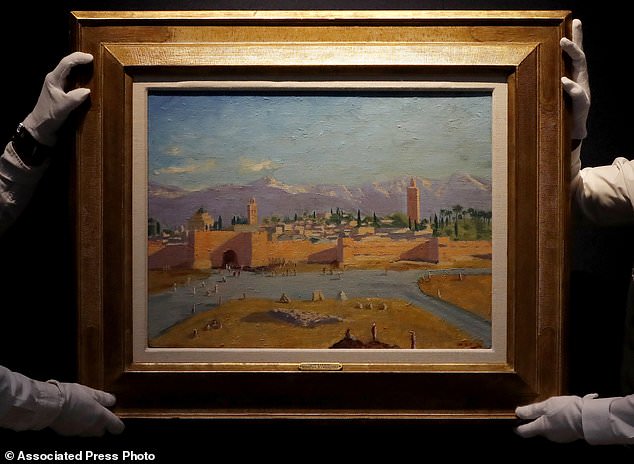 ‘Tower of the Koutoubia Mosque’, the only piece of art that Churchill completed during the war, sold at London auction house Christie’s for a staggering £8.3million on Monday 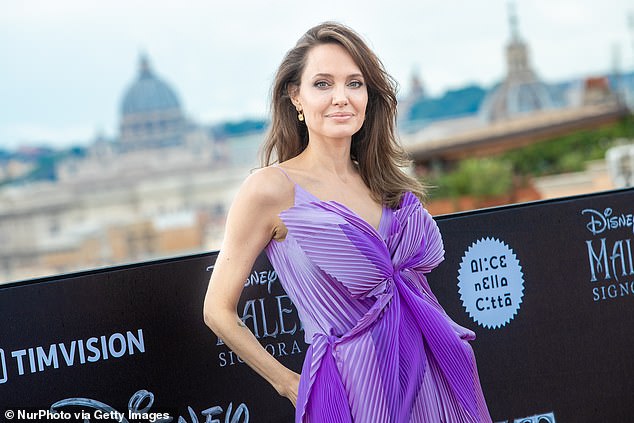 Actress Angelina Jolie sold a Moroccan landscape painting by Churchill for more than £8million, smashing the previous record for one of the World War Two leader’s artworks

The painting was sold by Roosevelt’s son after the President’s death in 1945, and had several owners before Jolie and partner Brad Pitt bought it in 2011.

The couple separated in 2016 and have spent years enmeshed in divorce proceedings, amid speculation about the division of their extensive art collection.

They were declared divorced in 2019 after their lawyers asked for a bifurcated judgment – meaning that two married people can be declared single while other issues, including finances and child custody, remain.

Churchill was introduced to painting during a family holiday in June 1915 when his political career was at a low ebb. He continued this hobby into his old age, painting over 500 pictures of subjects such as his goldfish pond at Chartwell and the landscapes and buildings of Marrakesh.

After the 1915 Gallipoli campaign, for which Churchill was widely held responsible, he was removed as First Lord of the Admiralty with demotion to Chancellor of the Duchy of Lancaster.

Depressed about the the turn of events and worried about the direction of his career, he hired a country house in Sussex for a holiday with family including his sister-in-law, Lady Gwendoline (‘Goonie’) Churchill.

Goonie was an amateur artist and encouraged Churchill to take up painting, starting with watercolour before moving to oil.

He was most fond of oils, writing: ‘Just to paint is great fun. The colours are lovely to look at and delicious to squeeze out.’

Though Churchill was reelected to Parliament in 1924 and later became Britain’s wartime prime minister, he  was known to set up his easel outdoors to capture the grounds of his country home in Kent.

He would also work during his travels to Egypt, Italy, Morocco, and the south of France, among other locations.

Famously, Churchill painted his ‘Tower of the Koutoubia Mosque’ during World War Two, before gifting it to President Roosevelt in 1943, after the Casablanca Conference, as an act of goodwill between the two nations.

US President Dwight D Eisenhower was also so taken by Churchill’s paintings that he decided to try the hobby for himself, and even set up a studio in the White House – reportedly the only US president to do so.

‘Tower of the Koutoubia Mosque was created following the Casablanca Conference where it was agreed by the Allied forces that only complete surrender by the Axis powers would be acceptable.

‘It is the only work that Churchill painted during the war, perhaps encouraged by the recent progress made by the Allies in what he considered to be one of the most beautiful countries he had encountered.

‘Tower of the Koutoubia Mosque is therefore arguably the best painting by Winston Churchill due to the significance of the subject matter to him, and the fact that it highlights the importance of the friendship between the two leaders.

‘The gifting of the work to Roosevelt underlines the fact that Churchill held the American President in such high regard and points to their joint efforts in guiding the Allied powers to the outcome of the Second World War.’

Churchill was introduced to painting during a family holiday in June 1915 when his political career was at a low ebb.

He continued this hobby into his old age, painting over 500 pictures of subjects such as his goldfish pond at Chartwell and the landscapes and buildings of Marrakesh.

Churchill began painting scenes of Morocco after being encouraged to visit the country by his painting tutor, Sir John Lavery.

Upon his first visit in 1935, he felt that the light and scenery were unrivalled, creating some 45 paintings of the country.

On Roosevelt’s death in 1945, painting passed to his son Elliot, who sold it in 1950 to a private collector. It was then sold to the producer of a 1964 documentary on Churchill, called The Finest Hours.

Pitt and Jolie bought the work from a New Orleans antiques dealer to add to their £18million art collection in 2011, partly housed at their Château Miraval residence in France, before agreeing to divorce in 2016.

Prices for Churchill’s paintings have increased recently, with some experts suggesting his ­portrayal by John Lithgow in the Netflix hit series The Crown may have sparked further interest in his works.

A painting of goldfish at his Chartwell home sold for £1.8million in 2014, while an oil and canvas depicting his favourite Johnnie Walker whiskey sold for £983,000 last year.