Wish you were here, but rapt you’re there

What a bittersweet moment this is for fans of the Melbourne Football Club. Their brilliant young team has risen to the club’s first AFL grand final in 21 years and is just one win away from ending the longest premiership drought in football. But, thanks to the pandemic, the match will be played not at the MCG – the club’s home ground – but two time zones away in Perth. No Victorian-based fans can attend.

For them, and for fans of their grand final opponents, the Western Bulldogs, there will be no last training sessions to soak up, no grand final eve parade, no vibe of a city in the grip of September fever. And if those deficiencies will make grand final week feel like it’s dragging on for a fortnight, it’s because the AFL has had to extend the break before the big match to a momentum-sapping two weeks. 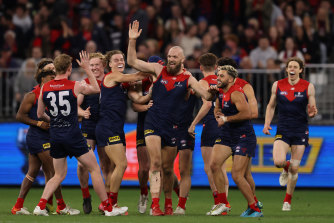 Max Gawn has inspired his teammates all season and is winning hearts in WA.Credit:Getty Images

It’s the second year in a row that the grand final has been played interstate while Victoria fights a coronavirus outbreak. It left a void in Melbourne last year and that void is likely to feel bigger this spring thanks to the involvement of the Demons. Remember the anticipation in 2016 when the Western Bulldogs were chasing their first premiership in 62 years, or the Tiger Army coming out in force in 2017 as Richmond sought to break a 37-year drought? The city became energised around these quests.

Melbourne hasn’t won since 1964 – the longest premiership drought in the competition – a scenario designed to unify fans of all clubs without a Dog in the fight. But it will be a challenge to create that same sense of theatre with the players more than 3000 kilometres away. 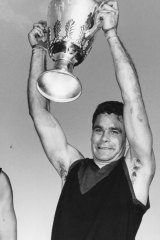 If that’s the bitter, though, it is far outweighed by the sweet. This year’s AFL grand final is a match-up of the two best teams in the country, and they are both playing joyous football. Even the fact they are playing football at all is something to celebrate.

For most of us, a gloomy winter of lockdown in Melbourne has given way to a spring of frustration and fatigue. In these abnormal times, sport has offered glimpses of normality and unexpected delights.

There were reasonable questions asked about whether it was appropriate for the Tokyo Olympics to go ahead as COVID-19 cases increased in Japan in July, but those Games and the Paralympics that followed demonstrated the capacity for sport to raise our spirits when times are dark. The value of the human endeavour involved in creating so many memorable Olympic moments was sharpened by the courage of the athletes who competed despite the ever-present dangers of COVID-19.

An AFL grand final being played before a packed stadium in the middle of a pandemic should be likewise cherished, even if it’s in Perth. With the vast majority of its teams based in COVID-plagued Victoria and NSW, the AFL faced an epic challenge to keep the competition alive and kicking. Its juggling of fixtures and the willingness of clubs and their players to play where and when required has delivered a reasonably trouble-free season of football to fans trapped in front of their TVs at home. 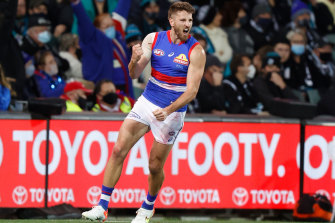 The players have endured weeks of separation from their families and constant travel, jumping from one COVID-free state to another. While fortunate to be able to play the game they love and maintain their employment in the pandemic, these young men deserve credit for enduring tight restrictions with barely a behavioural glitch.

The result is that football fans of all persuasions have something to look forward to when the rest of our horizons are obscured from view. The sight of Max Gawn lifting the premiership trophy on a historic day for the Demons, or Marcus Bontempelli leading a dazzling Bulldogs team to only the club’s third premiership win, will be sweeter for the challenges everyone has endured to get to the one day in September.