Wodaabe tribesmen face off in a beauty pageant to attract wives

Inside the ‘vainest tribe in the world’: Wodaabe tribesmen face off in a beauty pageant to attract future wives in Chad

Have you ever wondered why women always have to dress up for men? Well, this African tribe has turned the tables.

Men of the Wodaabe tribe, in deepest Chad, are required to don sequins, facepaint and beads once-a-year before dancing through the night in the hopes of winning an evening with a woman.

As the men frolick in traditional circle and line movements, their brightly coloured beads and necklaces glinting in the fire-light, the women watch and choose whoever takes their fancy.

According to Geography teacher Trevor Cole, 64, the pair then find a place to lie together under the stars. ‘This may be a one-night affair, or last for longer, sometimes culminating in marriage,’ he said.

The dancing continues from dusk to dawn, despite the 77F (25C) evening heat, in an annual festival – known as a Gerewol – which has been happening for centuries.

Two main Wodaabe groups attended this year. The Sudosukai, who are finely built, and the Djapto, who are more heavily scarred than their compatriots. The cuts are made by slicing the skin with a razor blade and rubbing in ash, resulting in a black tattoo which is slightly raised.

‘They dance endlessly at this festival and on the last night, they danced until dawn,’ said Mr Cole. ‘They have their own ancient rhythms which are repeated over and over.

‘To participate in the Gerewol, the girls must have menstruated prior to the festival. Effectively when choices are made the girls know they are going to have sex in the bush with the chosen Wodaabe male, if the male accepts them.’

The event is not yet on the tourist trail, making it a hidden gem. A few used to see it in Niger but, political instability in the country has kept tourists away in recent years. 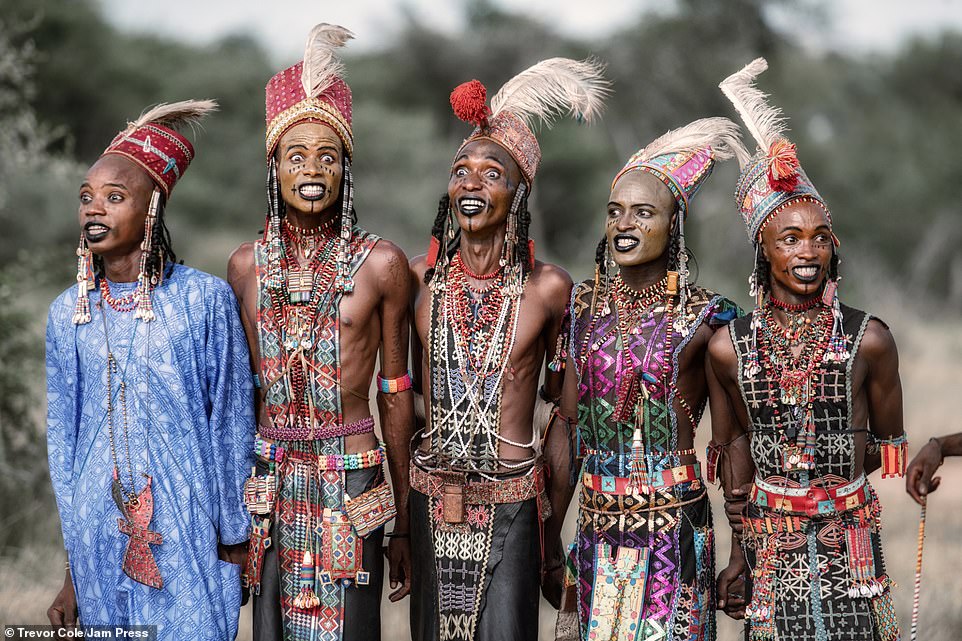 In the Wodaabe tribe, in Chad, men are required to dress up before dancing through the night to find a female partner 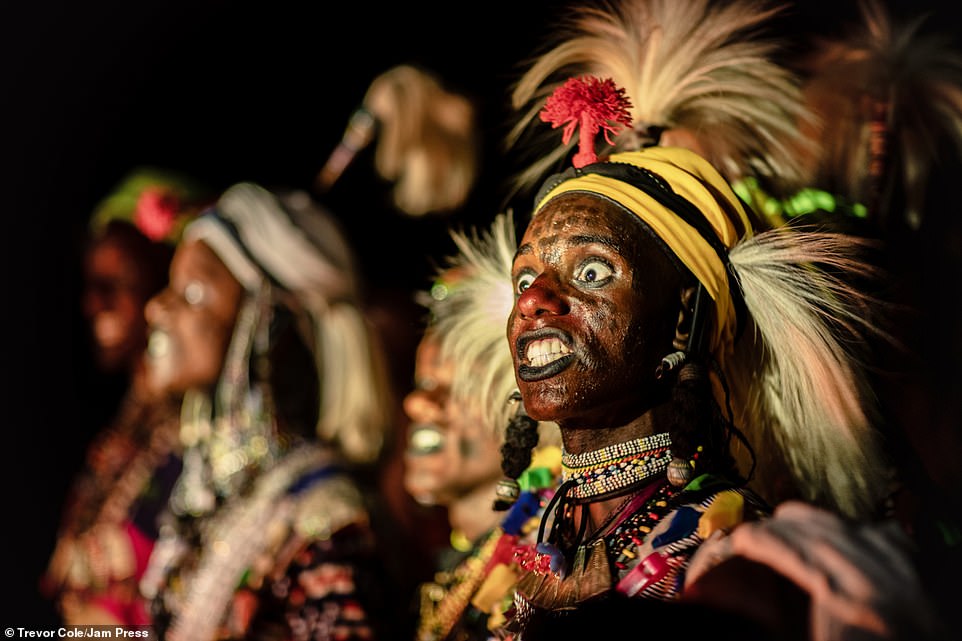 They dance in lines and circles following traditional rhythms. When a woman makes a selection, the pair head to a hedge 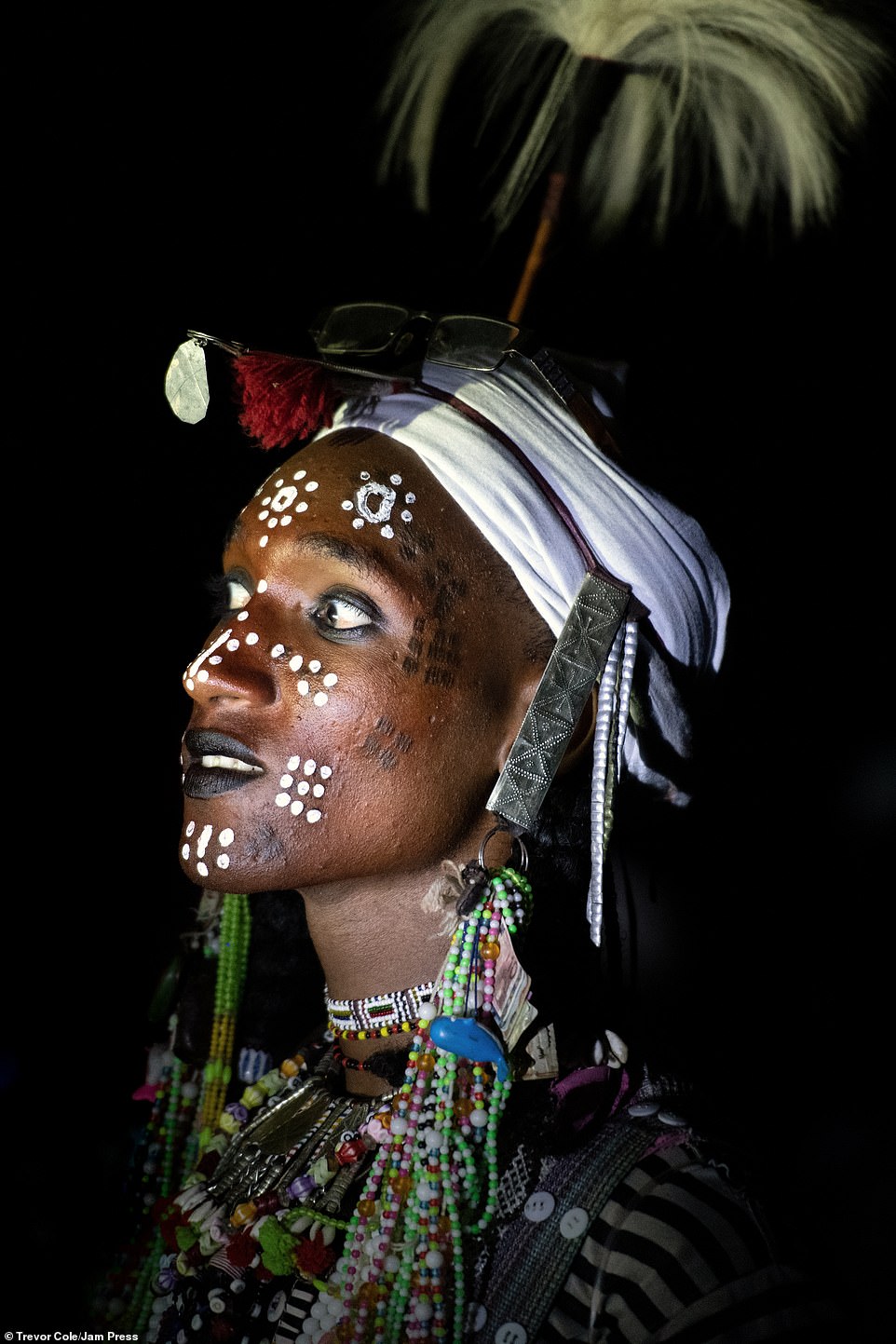 A man from the Wodaabe tribe bedecked with white, yellow, red, green and blue beads, facepaint and a pair of glasses 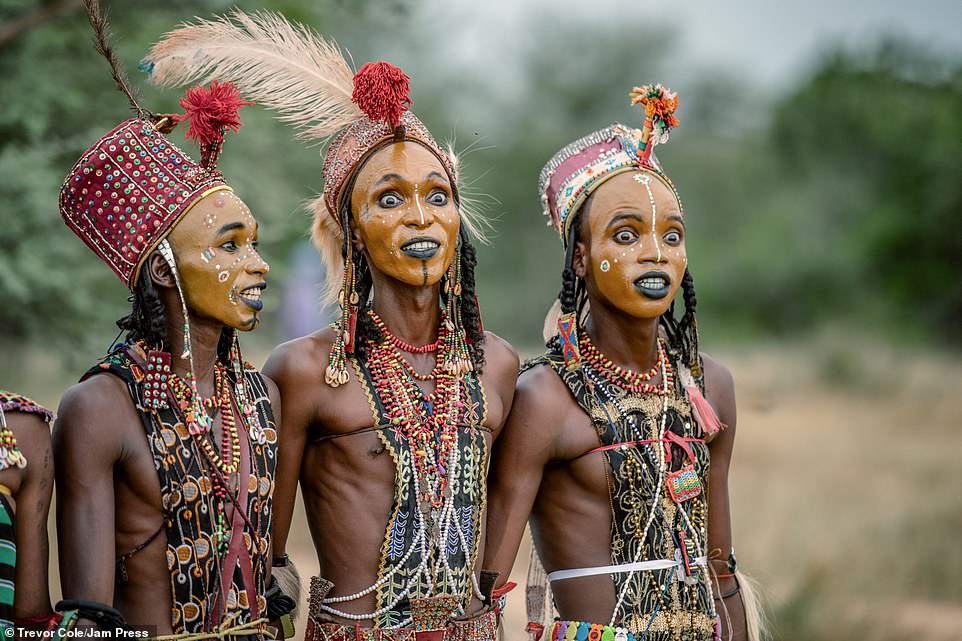 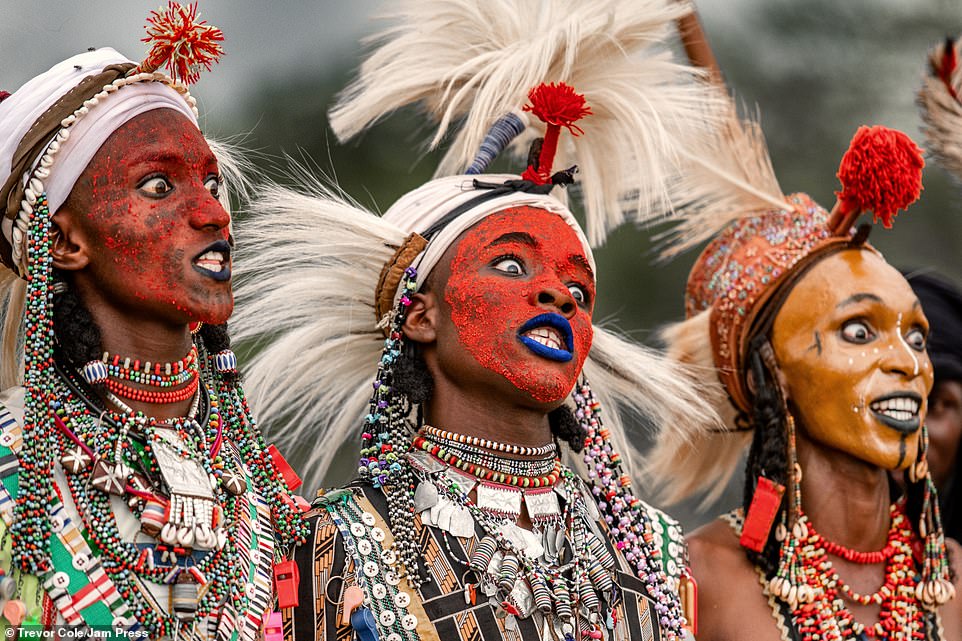 Some of the men attending also applied red face-paint and blue lipstick, in the hopes of wooing a potential match 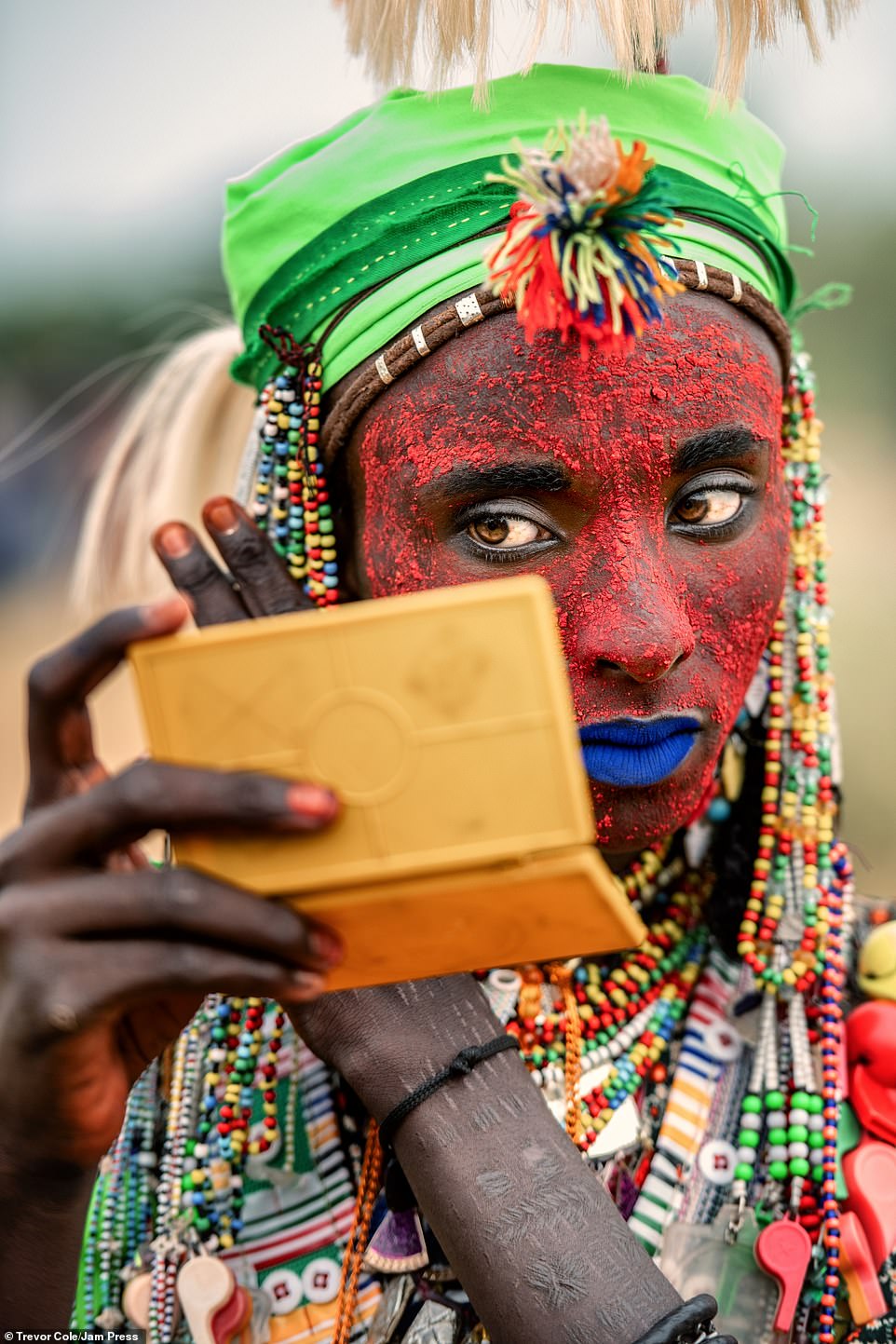 A wodaabe man is seen here preparing for the dance. Scars on his skin are also clear. These are made by cutting the skin with a razor blade and then rubbing charcoal into the wound, resulting in a slightly raised scar 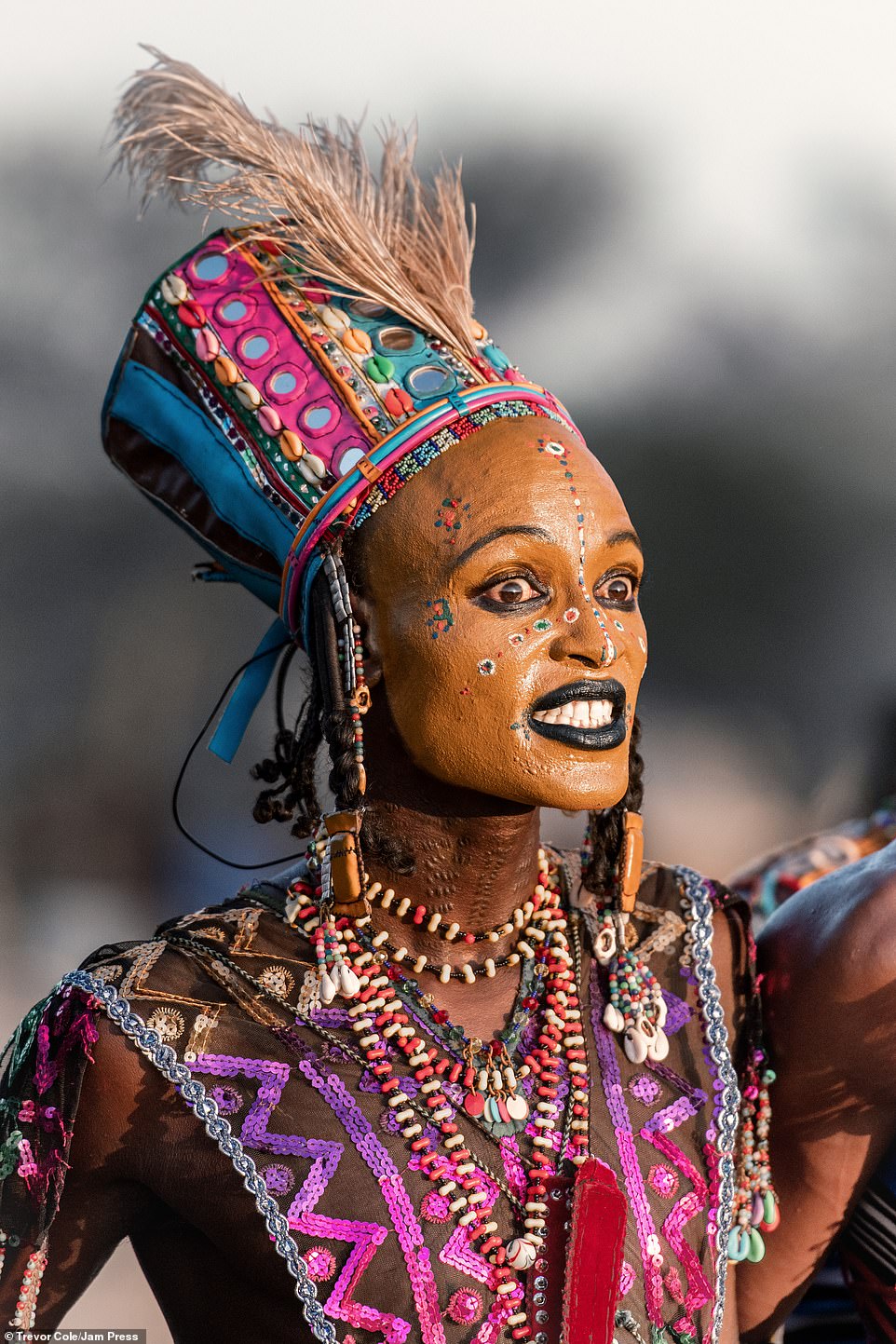 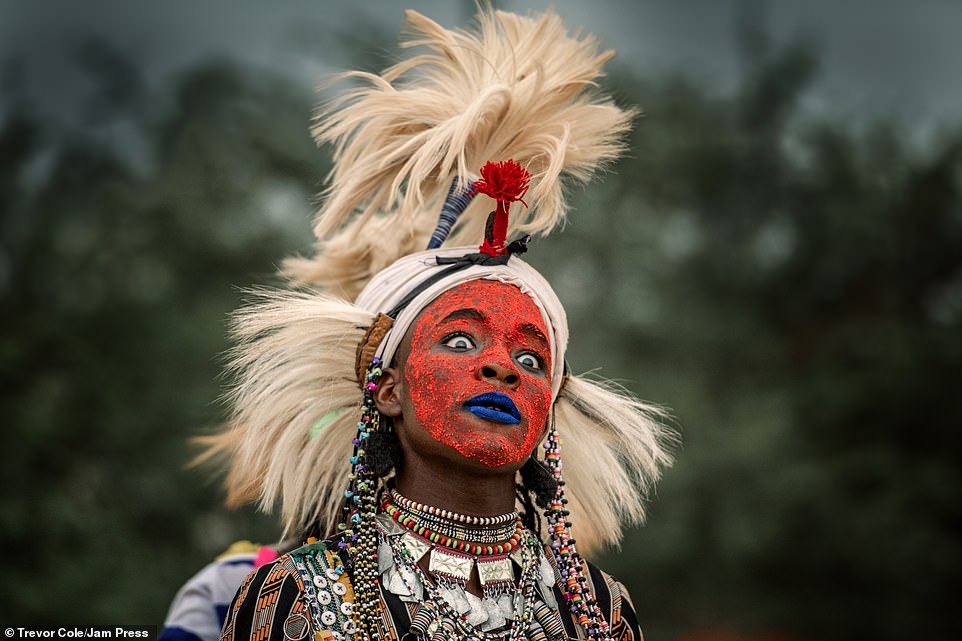 The location of the annual Gerewol festival generally is not decided upon until the last minute. Above is a man in attendance 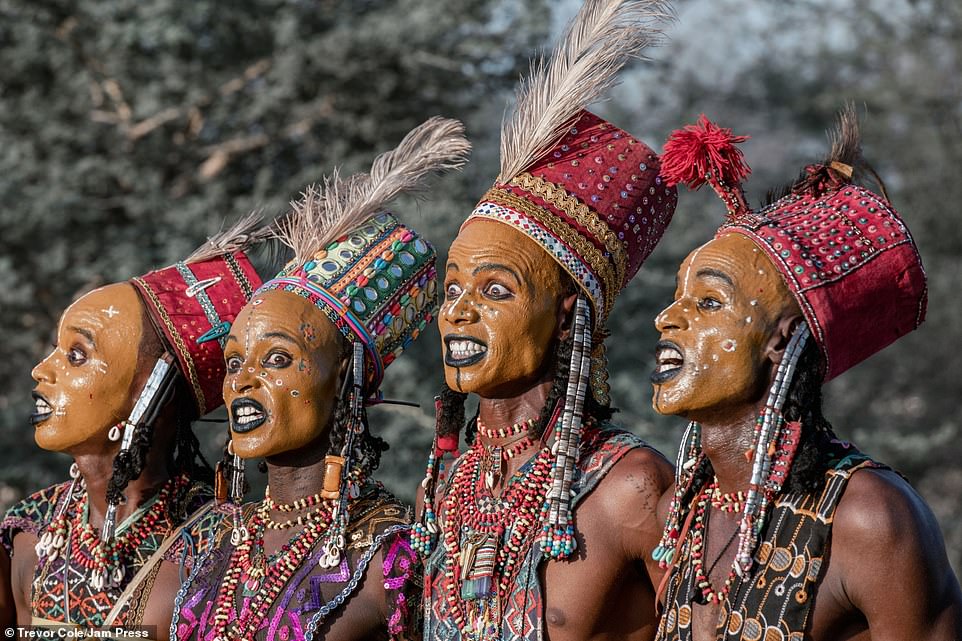 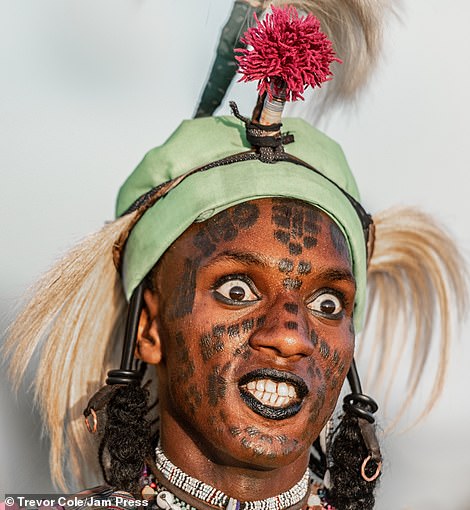 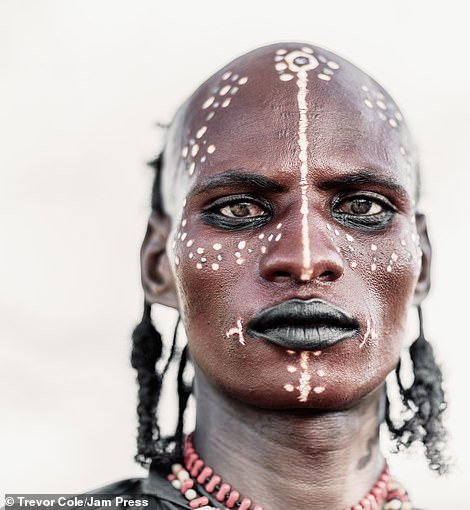 Two Wodaabe tribesmen pictured wearing facepaint, tassles and bead necklaces as they prepare for the festival 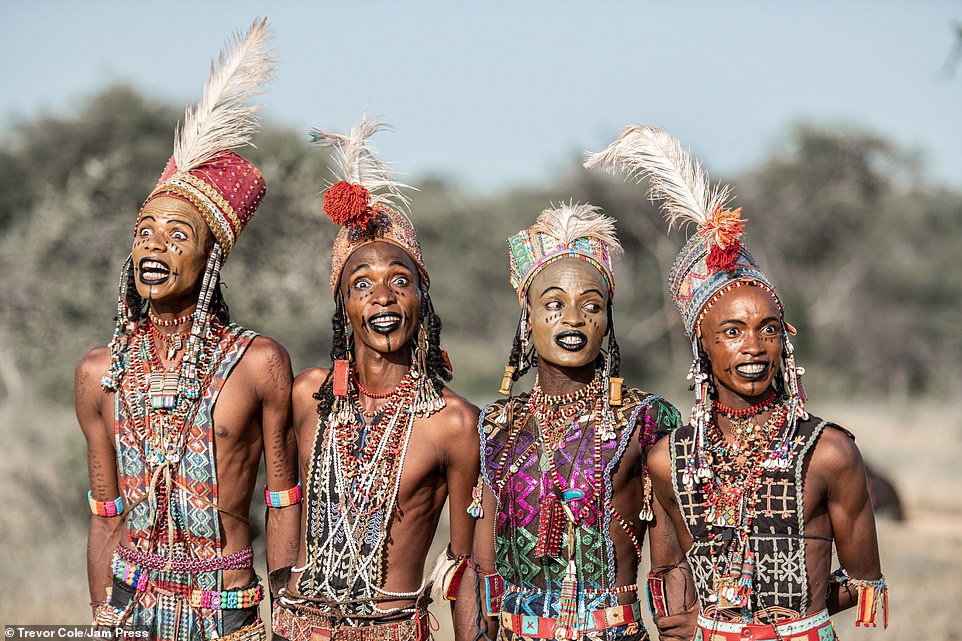 The men dance through the night at the festival despite the scorching heat, which can reach at least 77F (23C) 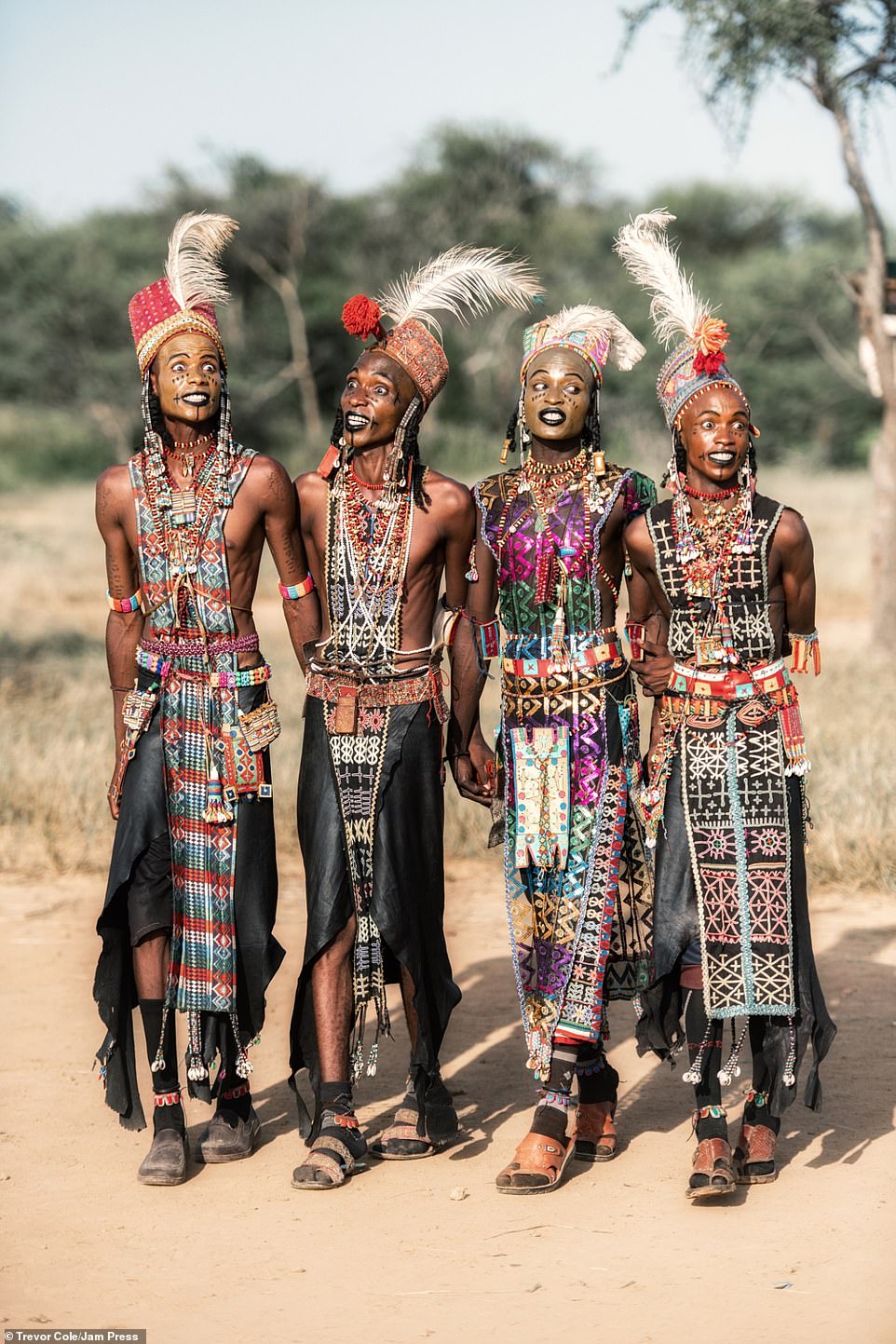 These men wear feather-topped hats, sequins, bands, sandals and seashells for the festival 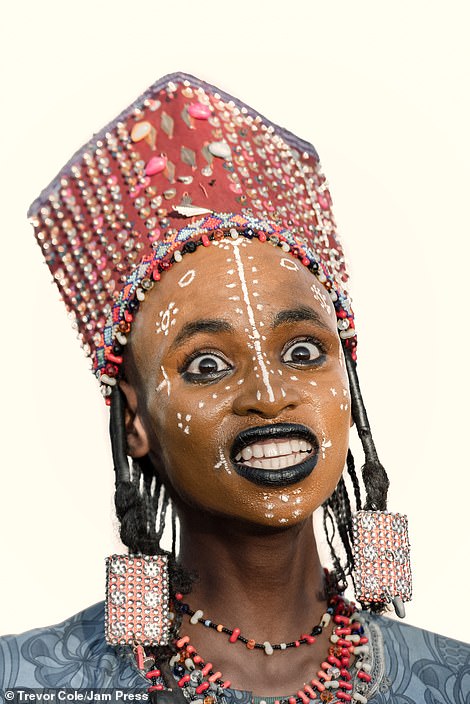 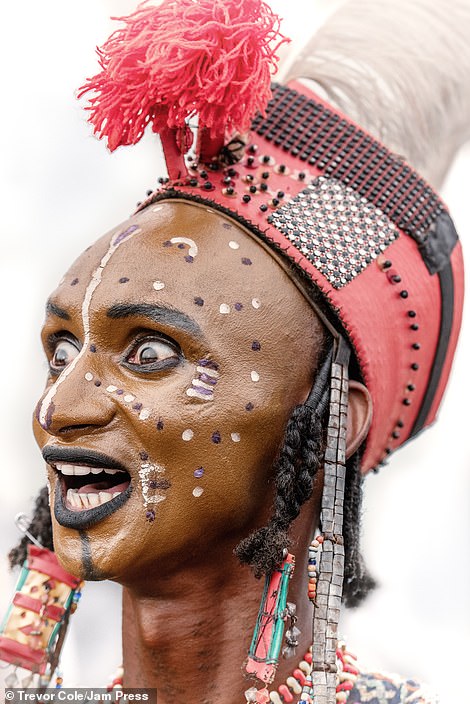 Geography teacher Trevor Cole watched the festival. He said that after men were chosen by a woman they headed into a bush with her. ‘This may be a one-night affair, or last for longer, sometimes culminating in marriage,’ he said. 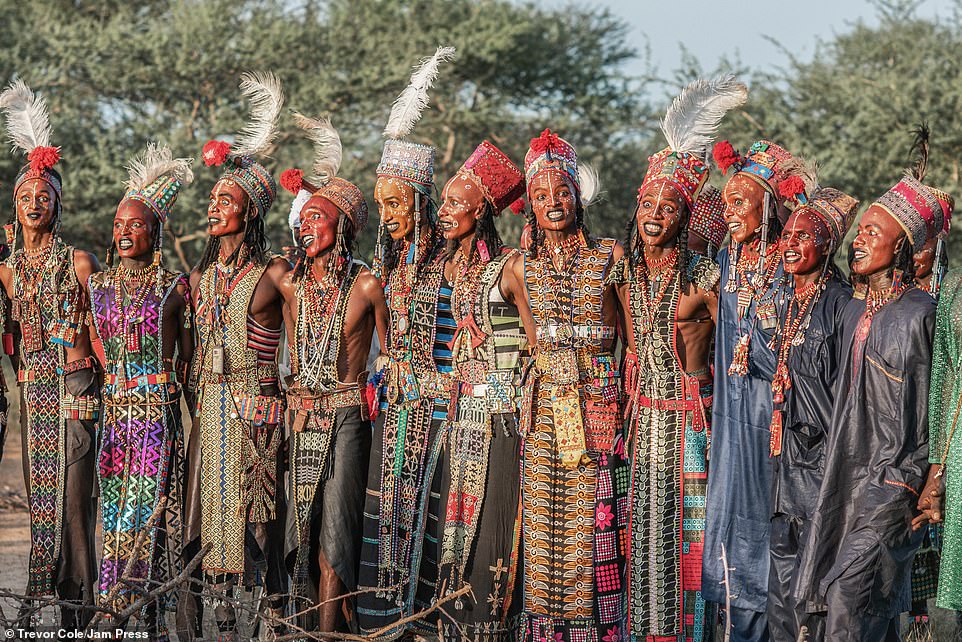 The men stand together in the sunset as they prepare for the traditional festival. It is held once every year 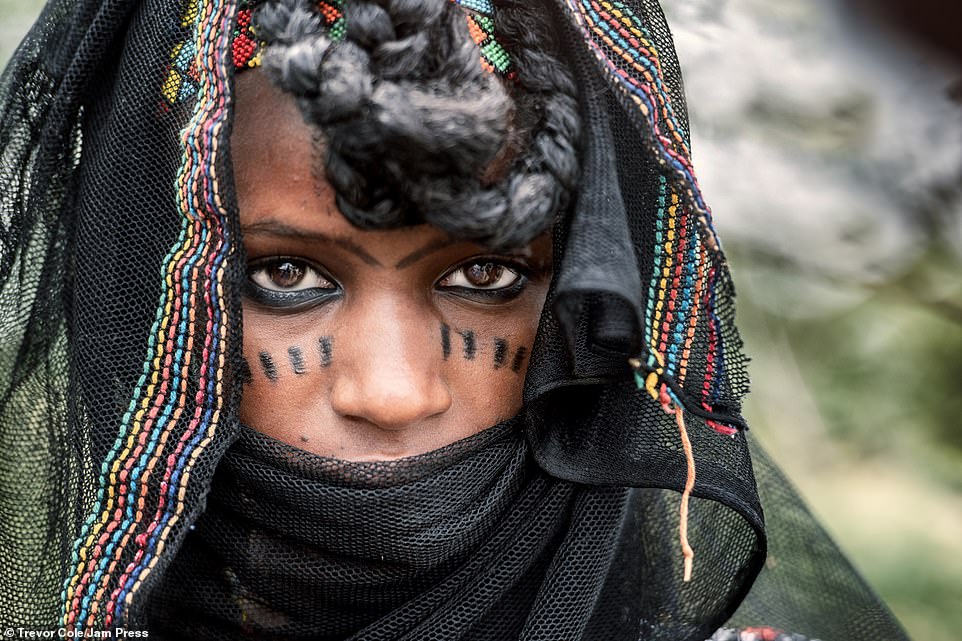 The tribe believes in polygamy, with men often able to take two or three wives. It also practices polyandry 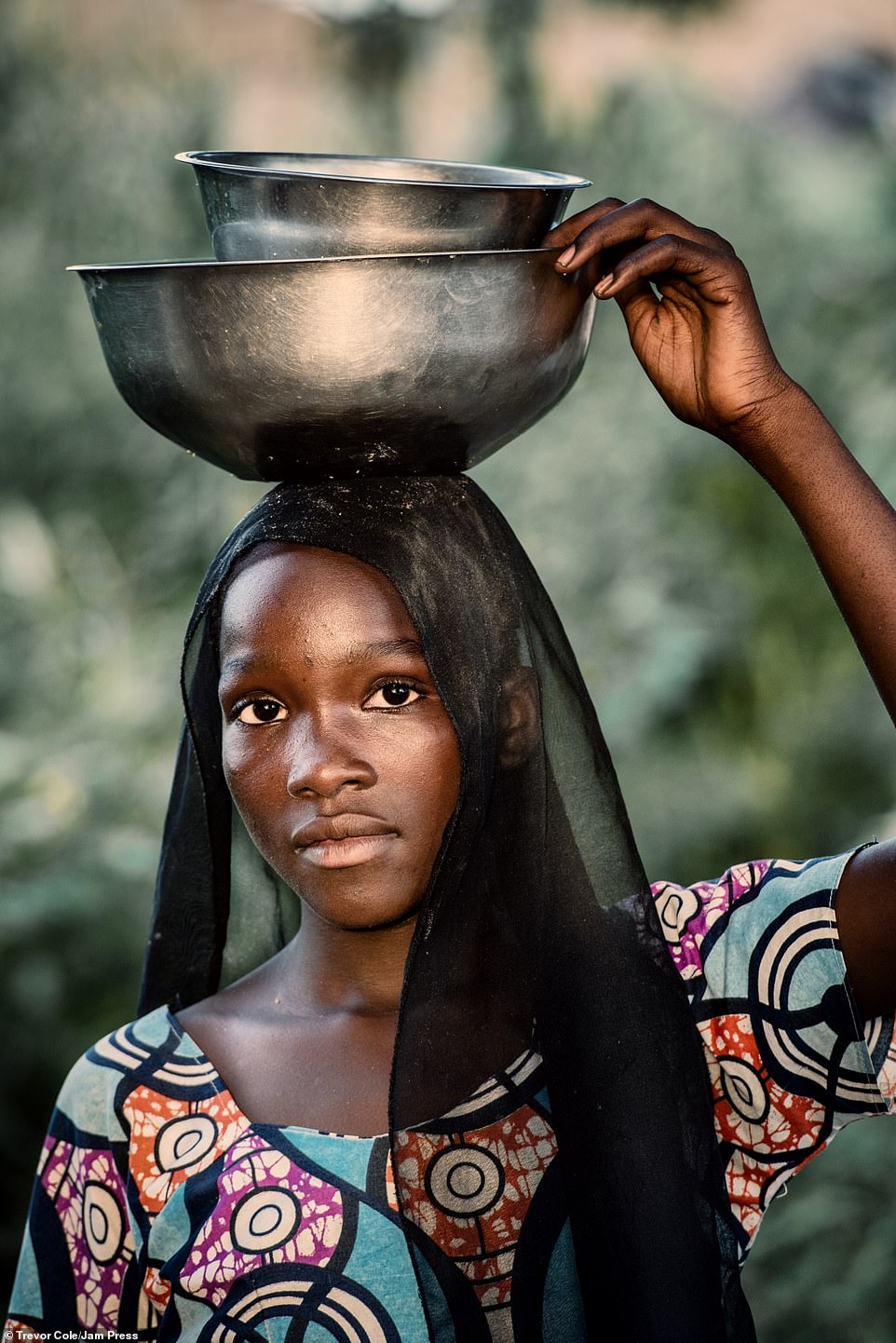 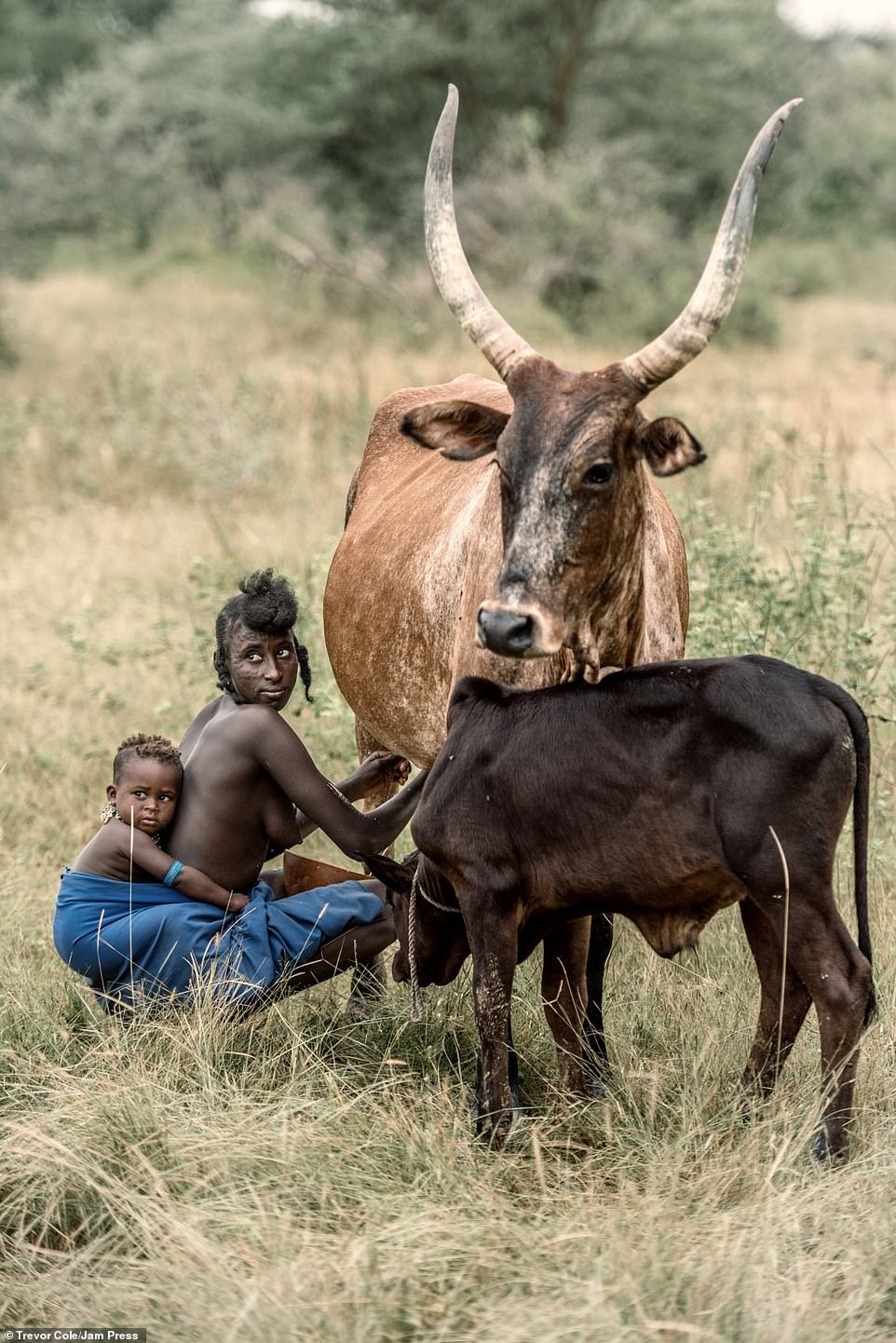 A Wodaabe woman pictured milking one of her cows at their village near Massenya, Chad