A woman managed to keep armed intruders at bay after they attacked a man with a machete during a botched home invasion in Melbourne’s south-west.

Men in hooded jumpers and face masks tried to force their way into the St Anthony Court home in Seabrook shortly before 5am on February 22. 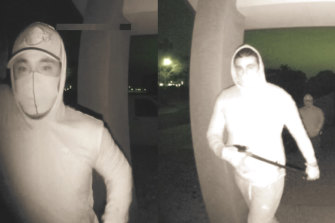 One male resident was struck with what is believed to be a machete after confronting the intruders, leaving him with a large laceration on his hand.

“The offenders again tried to force their way into the house however a female occupant managed to hold the door closed and they ran off through parkland toward Skeleton Creek,” a police spokeswoman said.

The male victim was taken to hospital with non-life-threatening injuries.

Investigators have released CCTV and images of two men they believe can assist with their inquiries.

It comes after police appealed for information following a terrifying home invasion in Melbourne’s north-west where thieves armed with a tomahawk and semi-automatic gun terrorised residents before stealing $40,000 worth of property.

The victims woke to the sound of a sledgehammer smashing down the front door of their Keilor East home in the early hours of December 18 last year.

A 44-year-old man was assaulted before the thieves stole more than $40,000 worth of property as well as the victim’s grey Audi sedan, with the registration AWH013, before driving away.

There is no suggestion the two home invasions are linked.

Anyone with information is urged to call Crime Stoppers on 1800 333 000 or submit a confidential report via www.crimestoppersvic.com.au.