A pensioner has been left ‘heartbroken’ after her dementia-struck husband’s care home cancelled her first visit to see him since March.

Susan Ogden, 73, was given just a day’s notice that she wouldn’t able to see her husband of 50 years Peter, 72, because coronavirus rates nationally were rising.

Mrs Ogden, a retired teacher from North Shields, North Tyneside, said it was the first time she had cried since her beloved husband went into care more than three years ago.

She said: ‘It felt like the last straw as I’d been building myself up to how the visit was going to go. I just want to hold his hand, and just to sit beside him, which wouldn’t be such a risk if I had a visor.’ 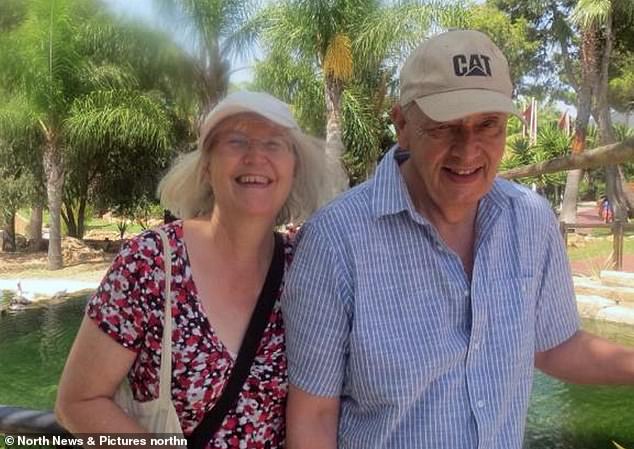 Susan Ogden, 73, was given just a day’s notice that she wouldn’t able to see her husband of 50 years Peter, 72, because coronavirus rates nationally were rising

Mrs Ogden is among millions of relatives who have had their Christmas wish of seeing a loved one snatched away from them as the rules on visiting are interpreted differently across the country.

The decision was all the more frustrating as infection numbers in the local area are below the average for England.

But the care home have now stopped all visits until residents receive the one of the coronavirus vaccines.

She added: ‘It was just a judgment made by the company, based in Birmingham, who basically said Covid cases are rising so no visits.

‘Some people had already made their visits by then. I’ve had a recent picture of Peter and my daughter said “he looks like an old man mum.”

‘He hasn’t got Covid at the moment but they’re going to be suffering from physical and mental neglect, even with the best will in the world.’

The couple, who have two children and four grandchildren, have been able to see each other virtually but Mrs Ogden said it was not the same as face-to-face contact and her husband struggled to use a screen.

In the summer, she was offered a socially-distanced visit wearing a mask in the care home’s garden but turned it down, believing it would be more likely to be upsetting for him than comforting.

She said the best way to engage with someone with dementia is by touch and that was not possible. 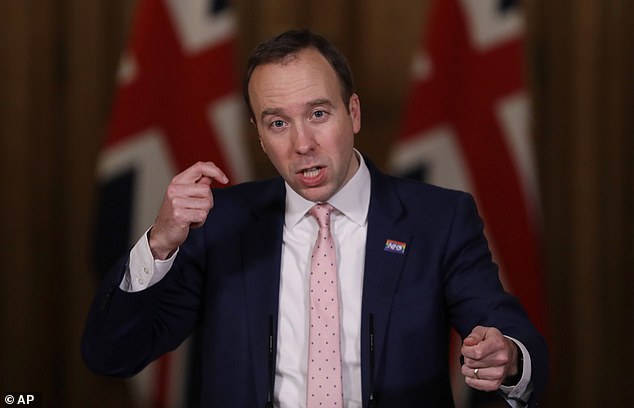 Last week Matt Hancock (pictured) said the Chelsea Pensioners had been given the Pfizer-BioNTech vaccine, but the heath secretary neglected to mention that at the time only seven other care homes had been vaccinated so far

However, after nine months apart she changed her mind and arranged a visit with PPE and social distancing for 21 December, only to receive a call from a nurse the night before to inform her of the policy change.

Some residents who were asymptomatic have tested positive, she said.

Mrs Ogden said she understood the problems faced by the care home, which was ‘incredibly short of staff’, but had no idea when she would be reunited with her husband.

She said: ‘It’s at the point now where it’s just cruel. We were never one of these lovey-dovey couples, always holding hands, but we take our marriage vows seriously ‘The emphasis seems to be on keeping people alive and safe, but what about quality of life?’ Mrs Ogden requested the care home not be identified. 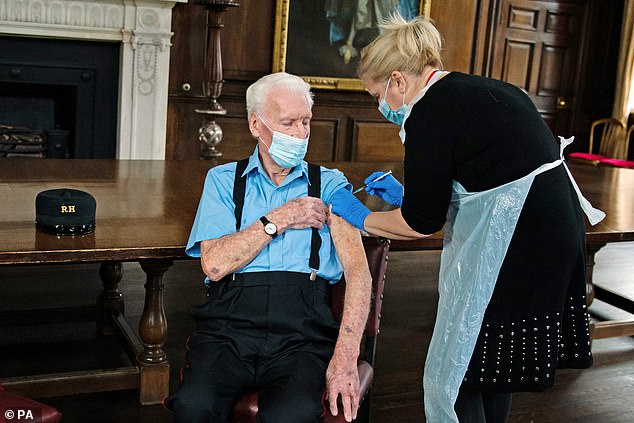 D-Day veteran and Chelsea Pensioner Bob James Sullivan, 98, was injected with the coronavirus vaccine at the Royal Hospital Chelsea on Wednesday, December 23

A spokesman for the home said: ‘This is not a decision that has been taken lightly and we understand that it will be upsetting for families.

‘We look after some of the most vulnerable people in society and have a duty of care to keep them safe.

In a statement, the home said the vaccine programme gave them hope that ‘we will be able to facilitate visiting again’.

2. All those 80 years of age and over and health and social care workers.

6. High-risk adults under 65 years of age

7. Moderate-risk adults under 65 years of age

11. Rest of the population

Last week, Health Secretary Matt Hancock admitted that the vaccines had only been rolled out in seven care homes, accounting for just 0.3 per cent of all inoculations.

Many care home residents have once again been allowed to hug their loved ones as rules on visiting were relaxed after being torn apart for nine months.

But charities have warned that ‘the cruellest of lotteries’ remains, with tens of thousands of families stuck in limbo due to a patchwork of different visiting rules across the country.

The new Tier Four restrictions – now affecting 23 million people – include a ban on ‘close-contact’ visits, dealing a devastating blow to families hoping to be reunited.

Other relatives had hopes of Christmas visits crushed because some local authorities are advising against the use of rapid lateral flow tests amid concerns over their accuracy.

Government rules on visiting are vague, saying it should be supported and enabled ‘wherever it is possible to do so safely’ and in line with guidance.

It adds that care home leaders are best placed to make their own decision, but the views and needs of individual residents should also be considered.

A spokesman for the Department of Health and Social Care said: ‘We know visiting restrictions in care homes have been very difficult for residents.

‘We have sent out millions of tests, provided free PPE and issued guidance to enable visits across all tiers.’