We will remember them: Heartwarming scenes as lonely digger, 95, who died with no family or friends is given the send-off he deserves by hundreds of strangers who gathered for his funeral

A World War II veteran died alone in a hospital bed with no family or friends to say goodbye or hold his hand as he gave his last breath.

Brian Stanley William Fortune, 95, fought in Palestine in 1944-45 as a member of the Durham Light Infantry, but nothing else is known about his service.

Just one photo of him is known to exist – the old soldier lying in his nursing home bed but still with a full head of hair and a wry smile on his face. 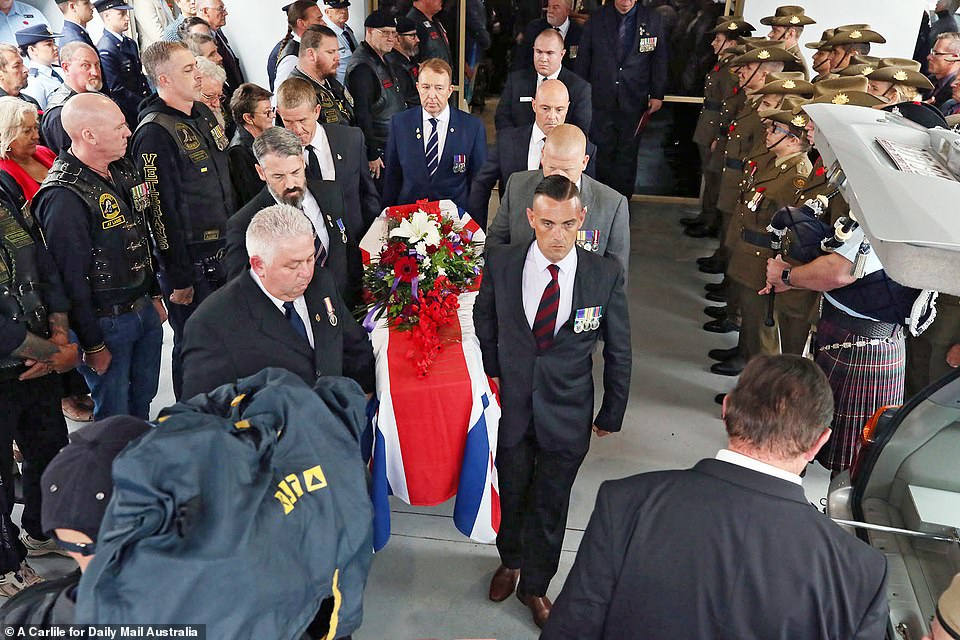 Hundreds of strangers farewelled Brian Stanley William Fortune, 95, at his funeral on Monday 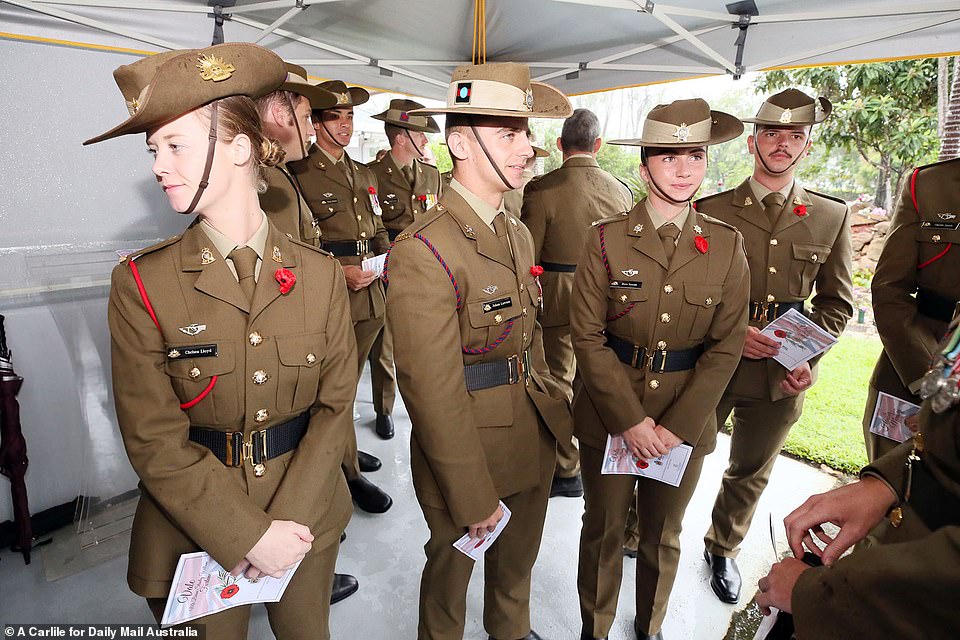 He died without anyone by his side last month but was far from alone when more than 300 mourners showed up to his full military funeral at Heritage Park Crematorium in Goodna, Brisbane, on Monday.

The local Ipswich RSL, none of whom had ever met him, pulled together upon hearing of his death from a hospital social worker and gave him a proper send off.

Serving members of all three armed forces in full dress uniforms joined veterans young and old in suits, all wearing their medals and poppies on their chests.

Two small children, in their school uniforms, also sat in the fourth row alongside their parents, and outside was a contingent of local high school students.

The small hall was packed to bursting and more than 100 more stood outside, unfazed by the pouring rain. 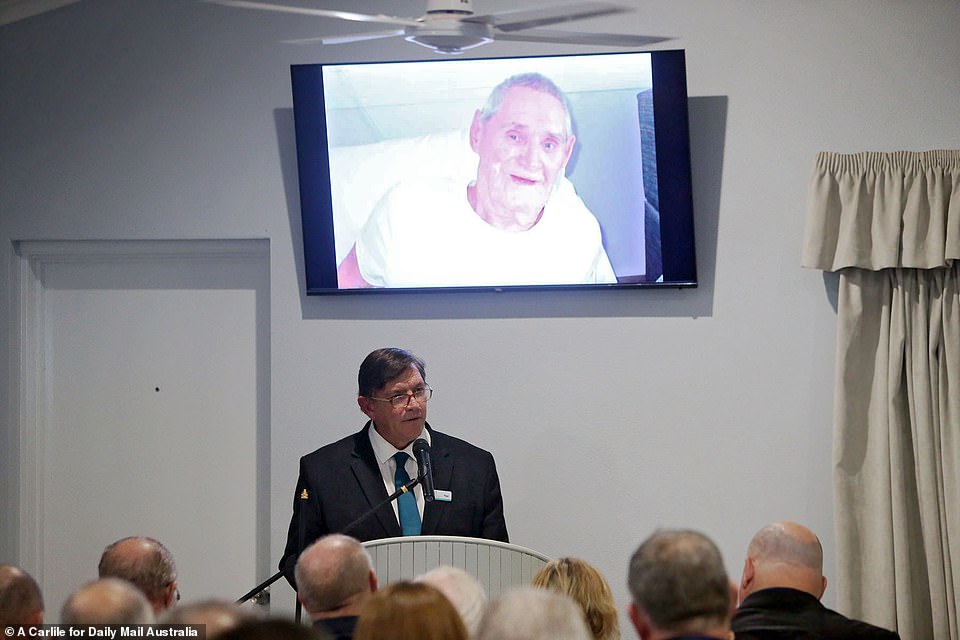 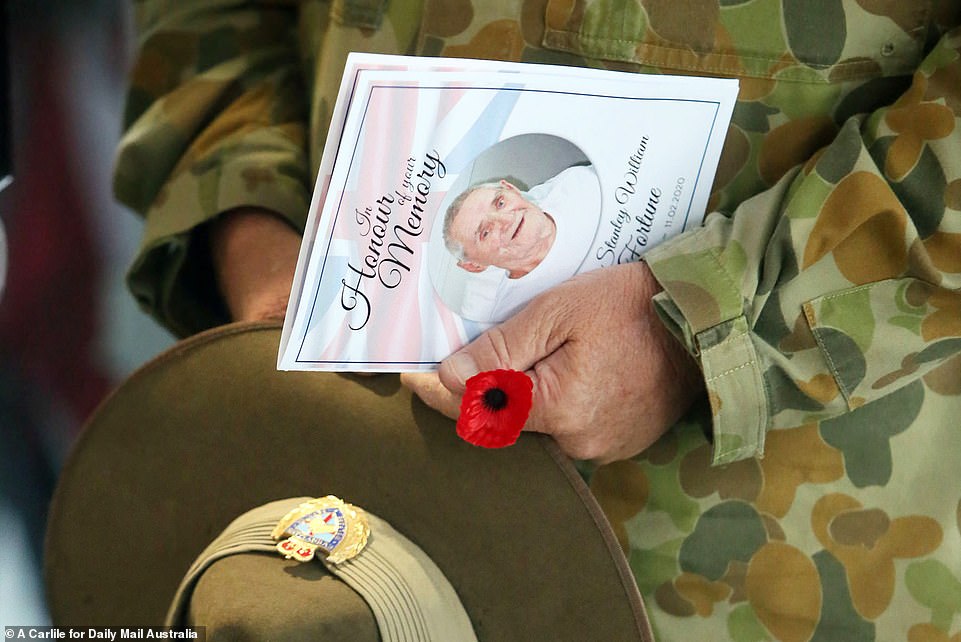 Mourners wore and held poppies in honour of the World War II veteran, who spent his final years in a nursing home 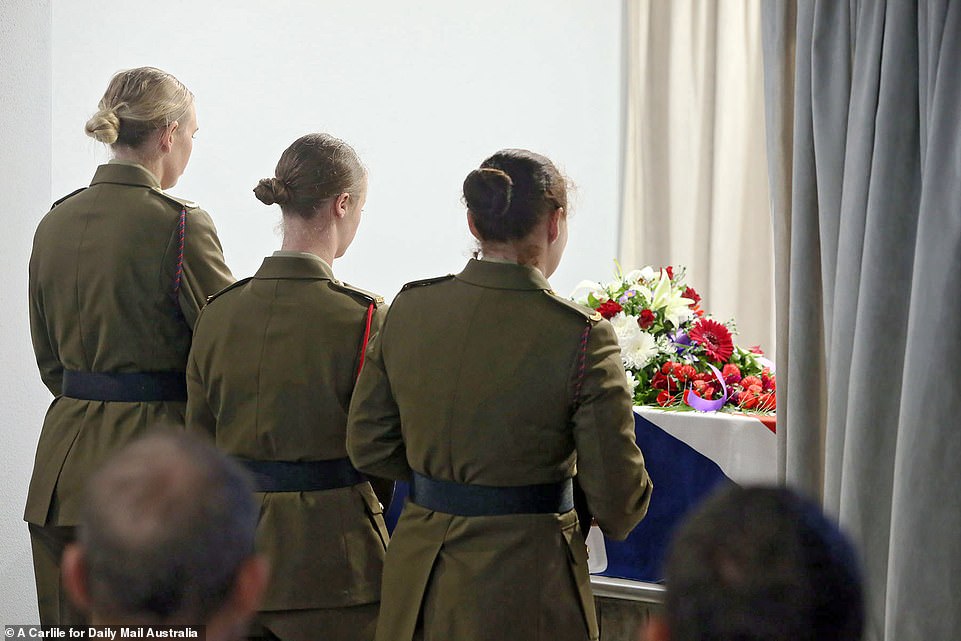 ‘Sadly much of Stan’s life will remain a mystery, and his life’s story has passed with him,’ he said.

Mr Fortune’s coffin was draped with the Union Jack flag and topped with flowers, a beret, and two single roses added by mourners.

Dozens of poppies were placed on his casket as a bugler played later in the service, in military tradition.

As his coffin was carried out of the hall, it was given an honour guard by uniformed soldiers on one side, and members of the Diggers Motorcycle Club one the other.

All the while, bagpipes played Amazing Grace as mourners sang along.

Mr Fortune was living in Rockhampton, in Central Queensland in 2014 and was a regular at a local Irish pub where he met barmaid Brenda Brennan, whose tribute to him was read out at his funeral.

Ms Brennan said she met the old soldier on her first shift when he told her about his affinity for the Irish as he spent time holidaying in a small village in the late 1950s.

‘Stan was a quiet, private man but a great storyteller. He loved nothing more than telling a good joke or a story to anyone who would listen,’ she said.

‘He was a gentleman, and he would make sure that ladies always had a seat, and he would never speak crudely in the presence of a woman.

‘Stan was very regimental with is routine – on a Friday he would go shopping, pay his bills and get a taxi to the pub, where he had his own bar stool and his own glass.’ 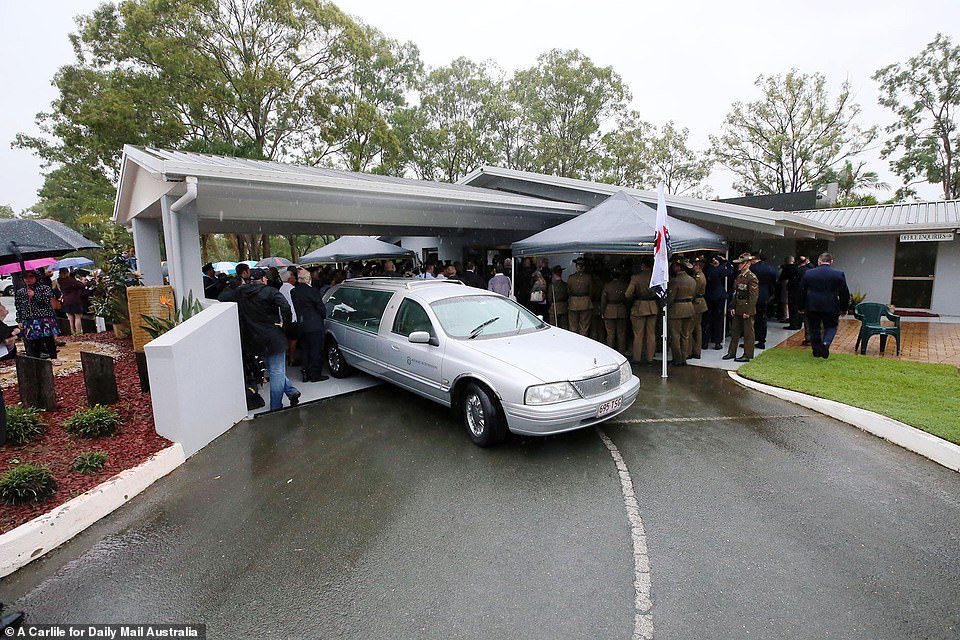 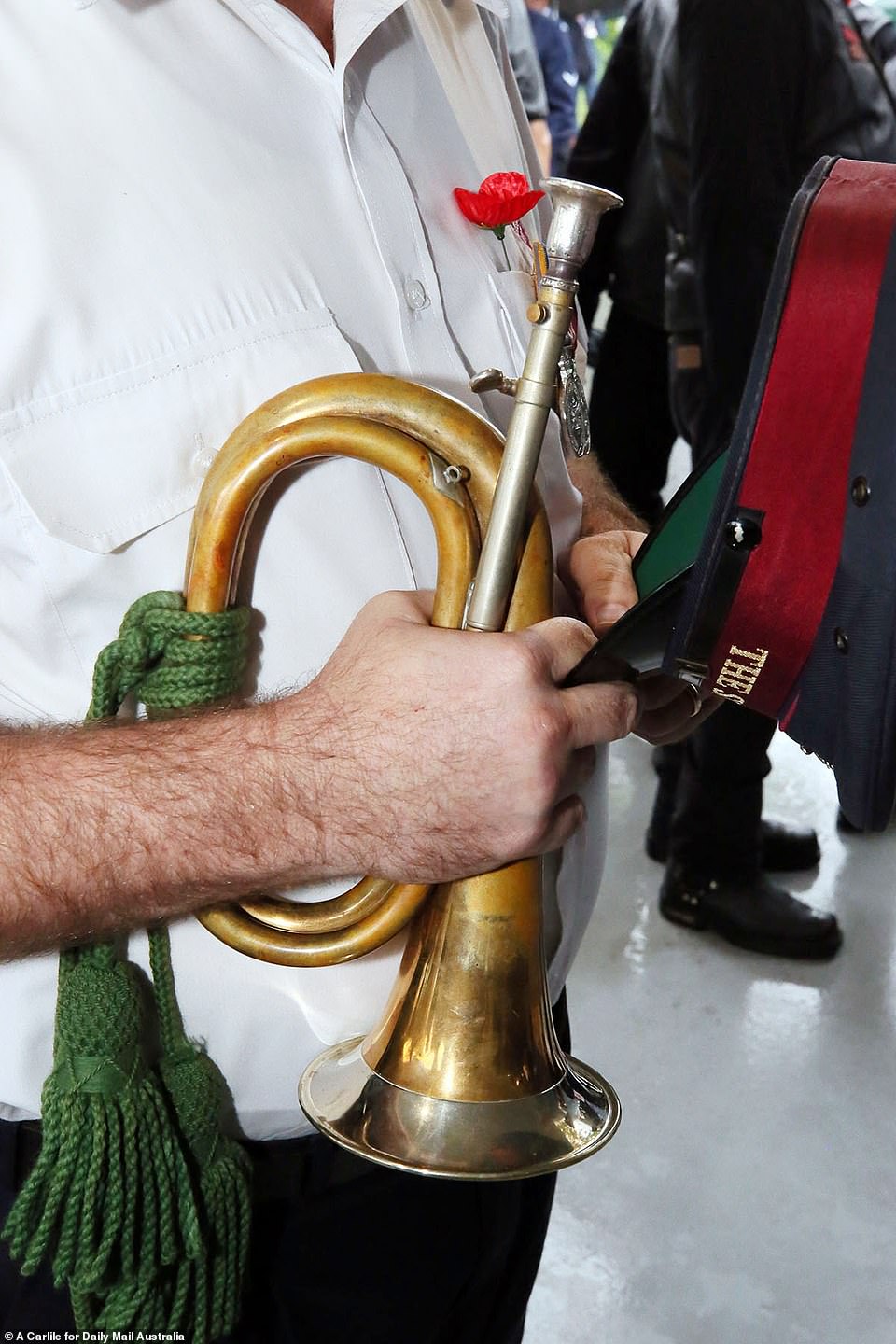 In military tradition, a bugler played at the funeral service of Brian Stanley William Fortune 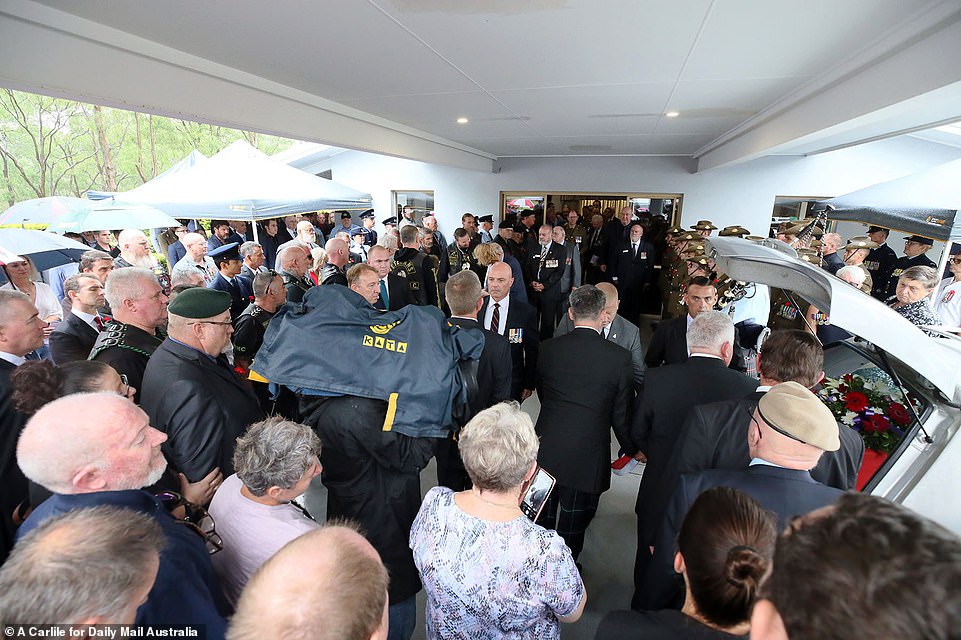 Brian Stanley William Fortune was remembered as a quiet, private man but a great storyteller and his love for Guinness 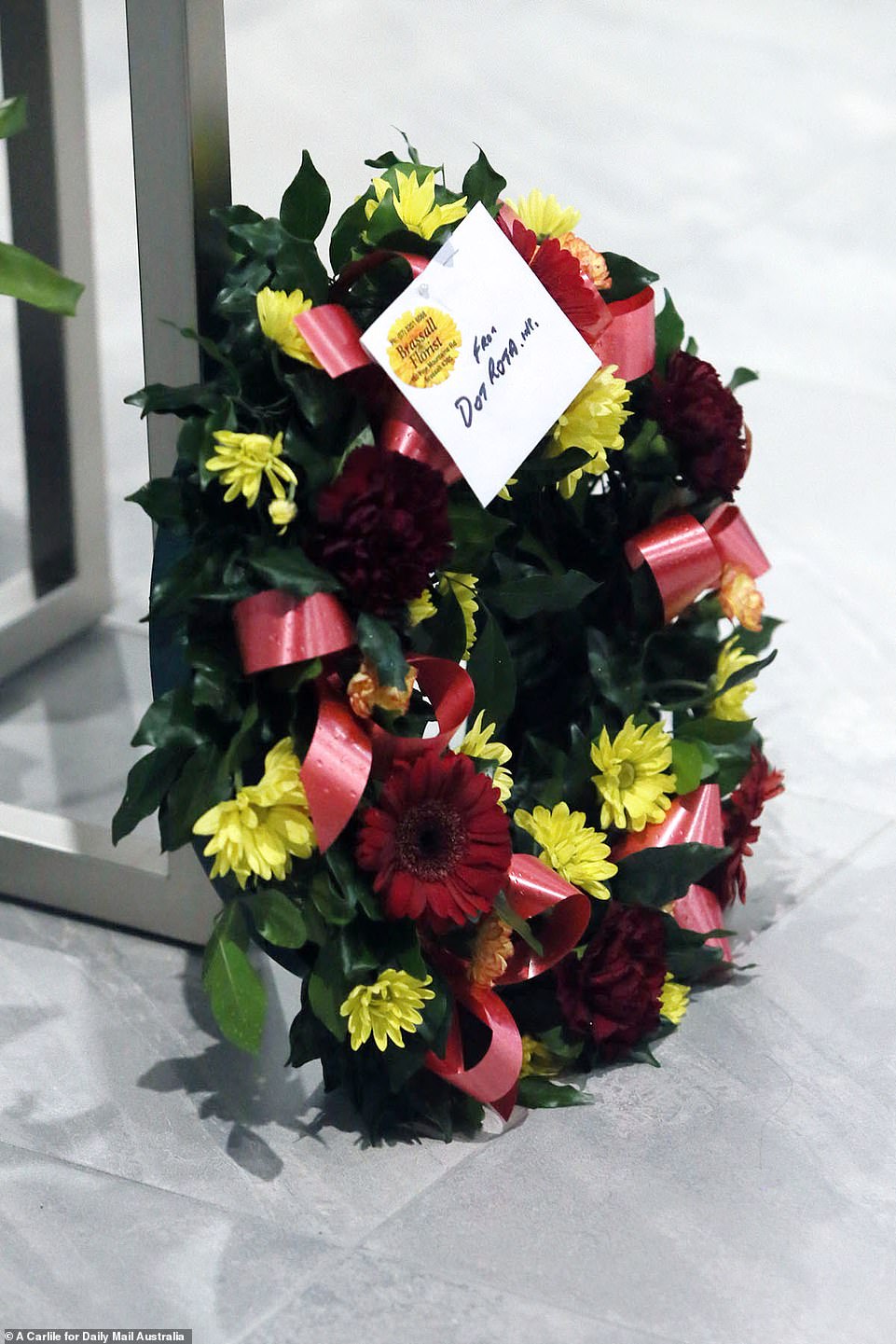 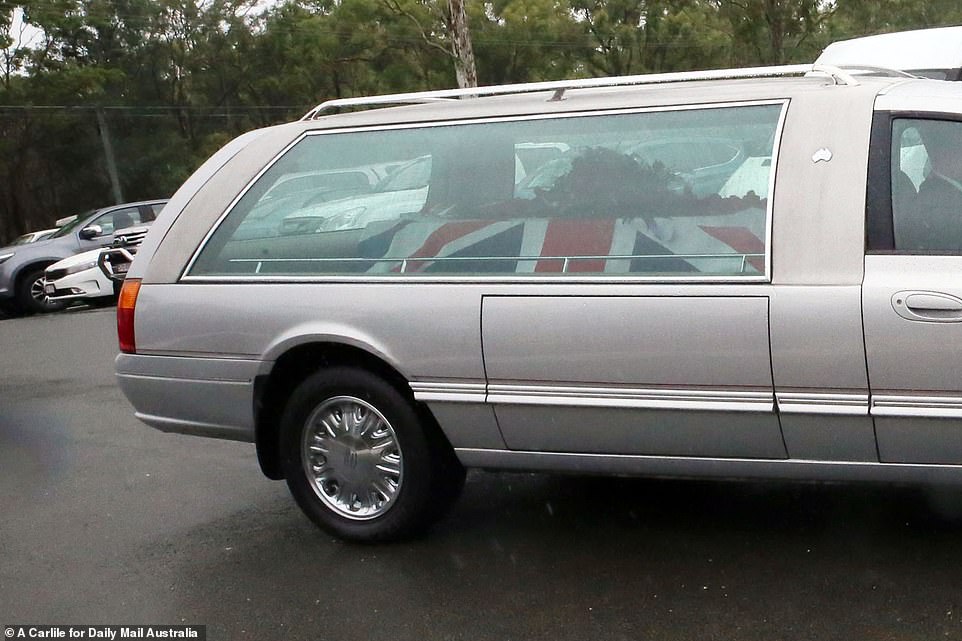 Despite no surviving family, strangers ensured Brian Stanley William Fortune was given the proper send off he deserved

Mr Fortune had a taste for Guinness and Ms Brennan said staff would pour his next beer when his glass was half empty.

‘It had to have the perfect head, or Stan would send it back,’ she recalled.

However, as much as he liked jokes and stories, Mr Fortune never revealed much information about himself and strictly forbid anyone to take a photo of him.

‘Stan was a caring man and never liked to see anyone going without. He was always helping the less well-off and never looking for anything in return,’ Ms Brennan said. 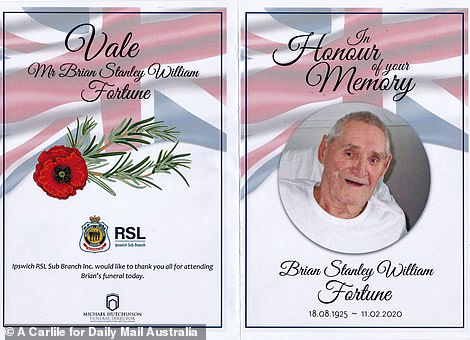 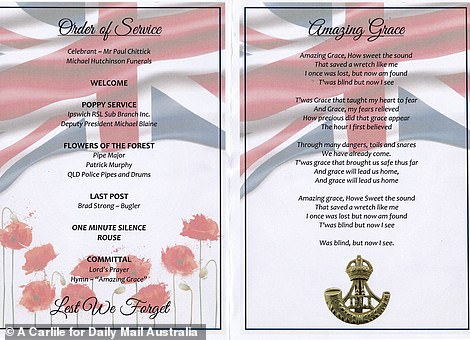 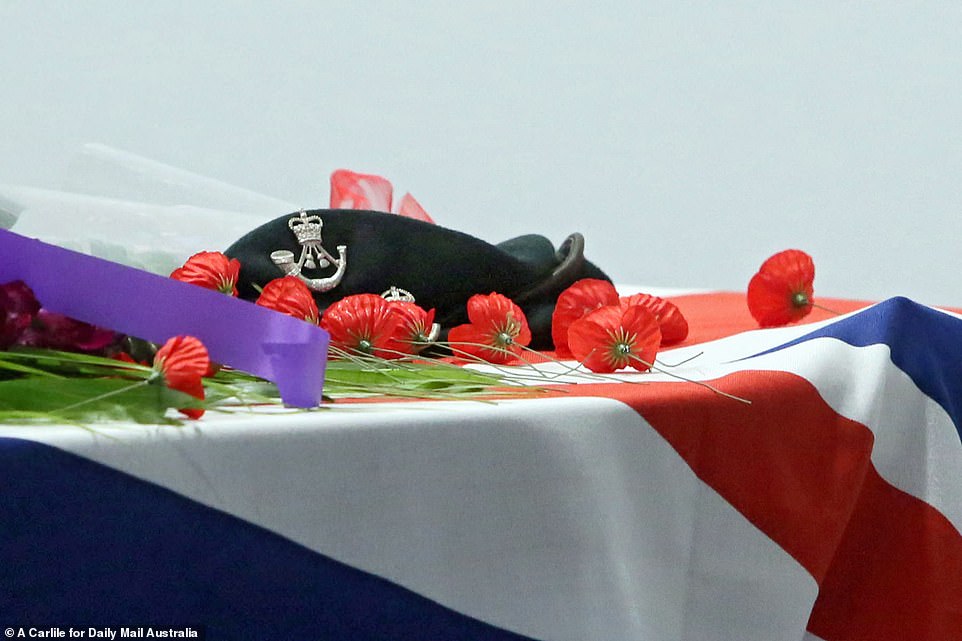 Heartbroken strangers placed poppies on Mr Fortune’s casket, despite not knowing the veteran who endured a lonely death 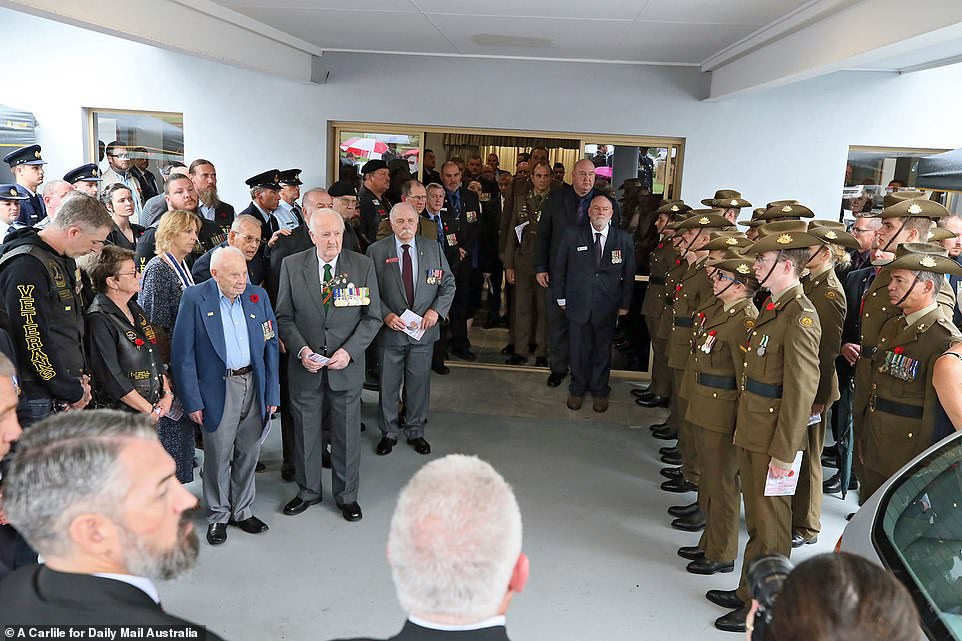 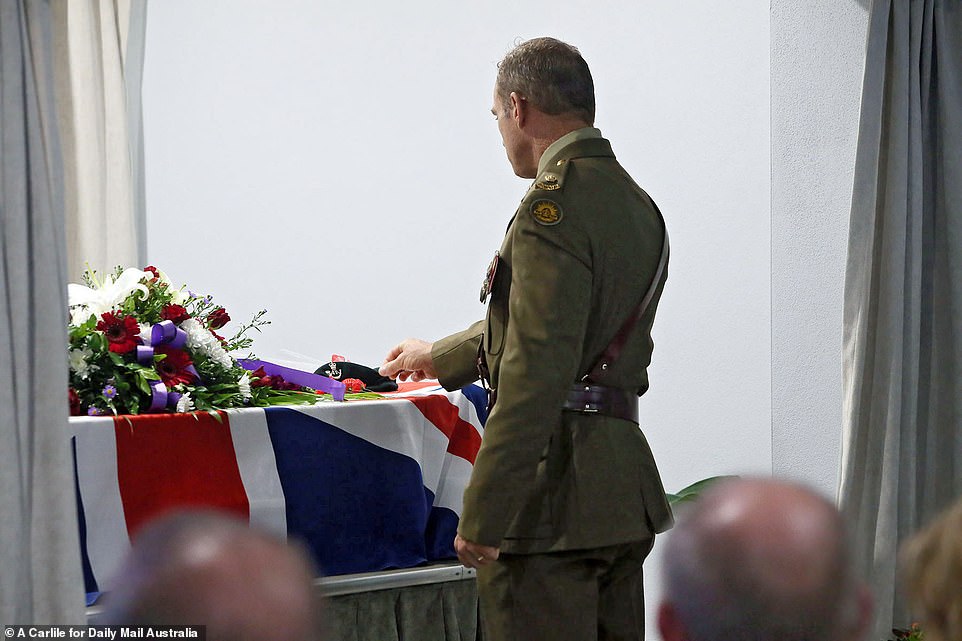 ‘He was a bit like a granddad to us Irish, he would give advice when he felt it was needed. Stan will be missed and we will remember him on St Patrick’s Day.’

His health began to decline about 18 months ago and his doctor told him to quit drinking – but he refused.

A few months later he stopped showing up and lost touch with the staff as they never knew where he lived. 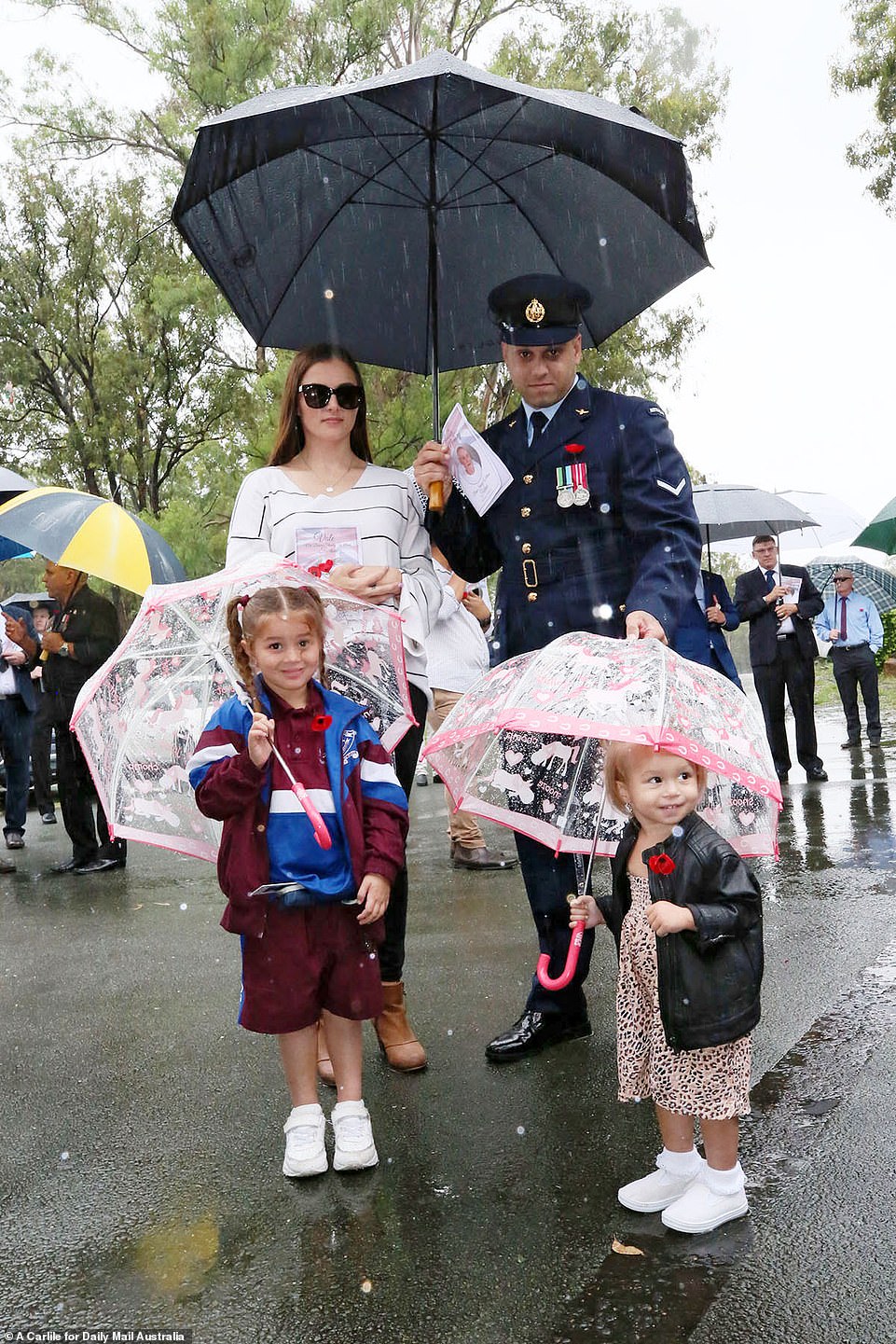 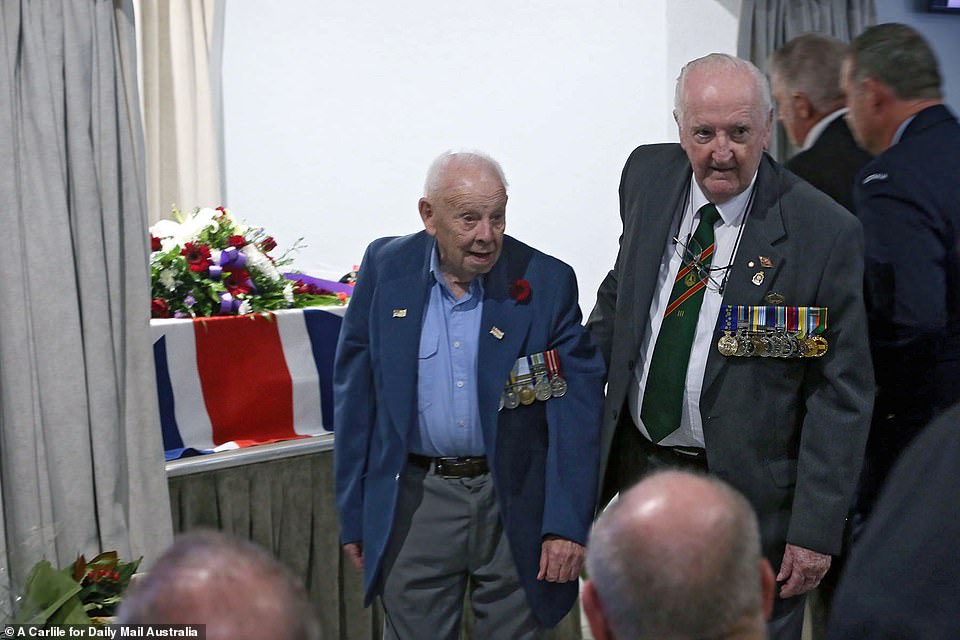 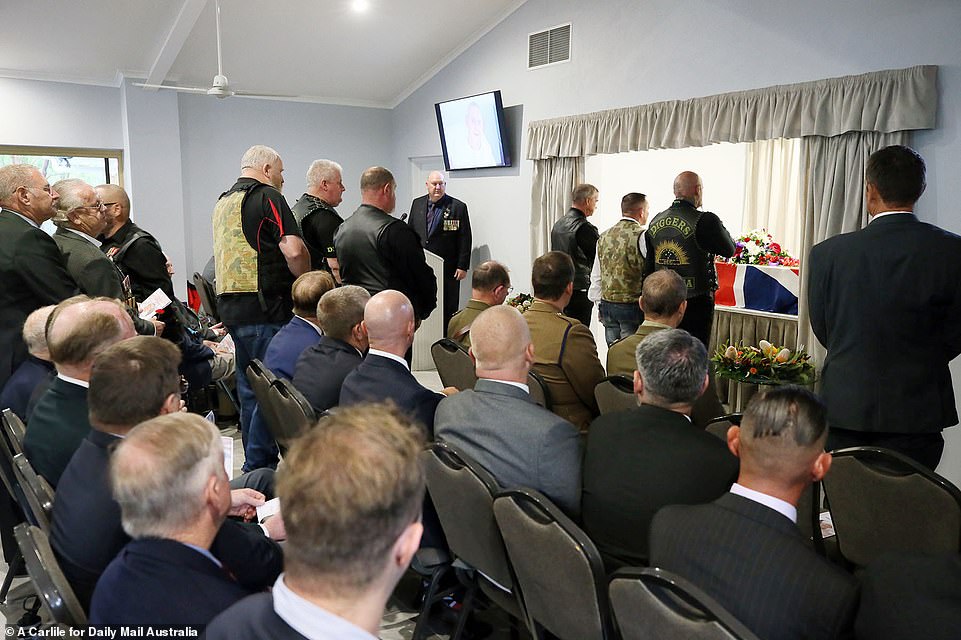 The small hall at Heritage Park Crematorium was packed to capacity, with many mourners braving the rain outside 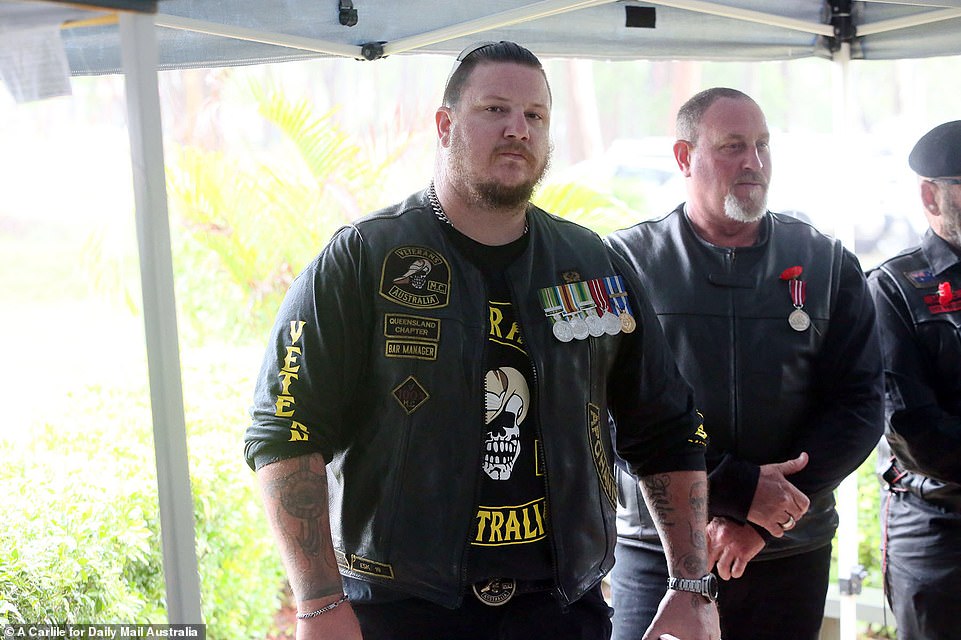 Mr Fortune moved from Rockhampton to Ipswich last year to live in the Bundaleer Lodge aged care home until his death.

Mr Blaine told Daily Mail Australia the RSL only expected about 10 people when it put a post on Facebook about the funeral.

But the post was shared thousands of times and veterans emailed the Chief of Defence to ask for something to be done for him.

The RSL was forced to change the venue after hundreds said they would attend.

‘I’ve never seen so many poppies on a coffin before,’ Mr Blaine said.

‘It makes me very proud to be a veteran, seeing the comradeship and love we have for each other.’ 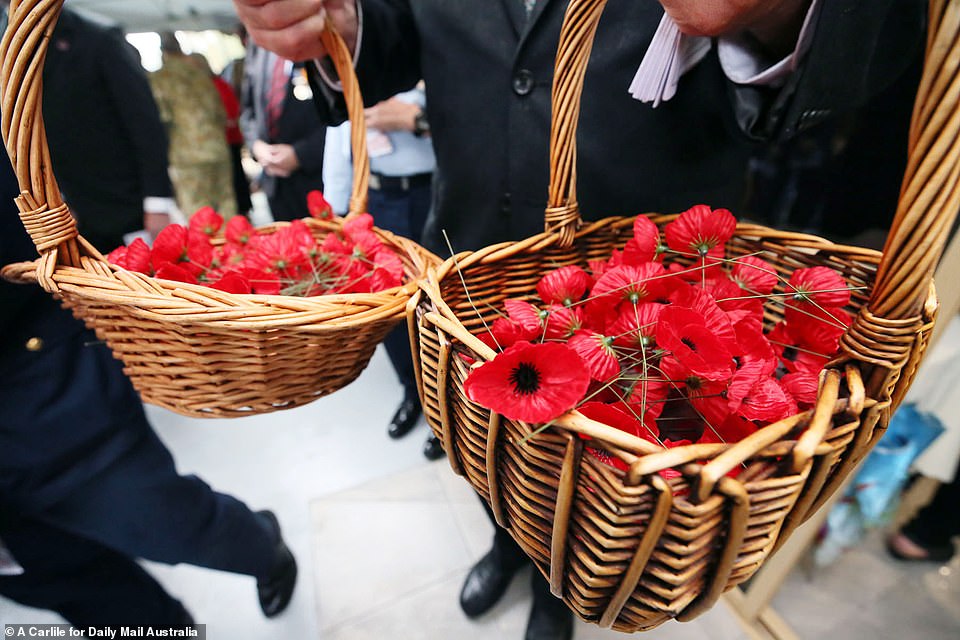 There were baskets of full of poppies, which mourners placed on Mr Fortune’s coffin, which was draped in a Union Jack flag 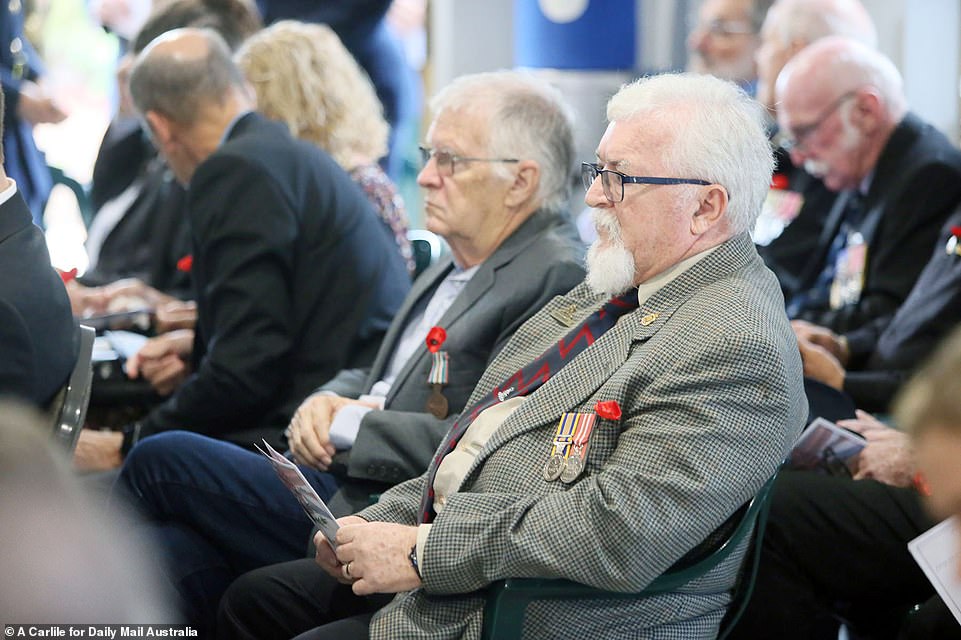