DRAGGED to the bottom of the sea, limbs torn off and shipwrecks stalked by sharks – stories of the ocean predators always send a chill down the spine.

This week, Shannon Ainslie recalled how he was lucky to survive "the world's only" double attack by the predators – who both went for him at the same time. 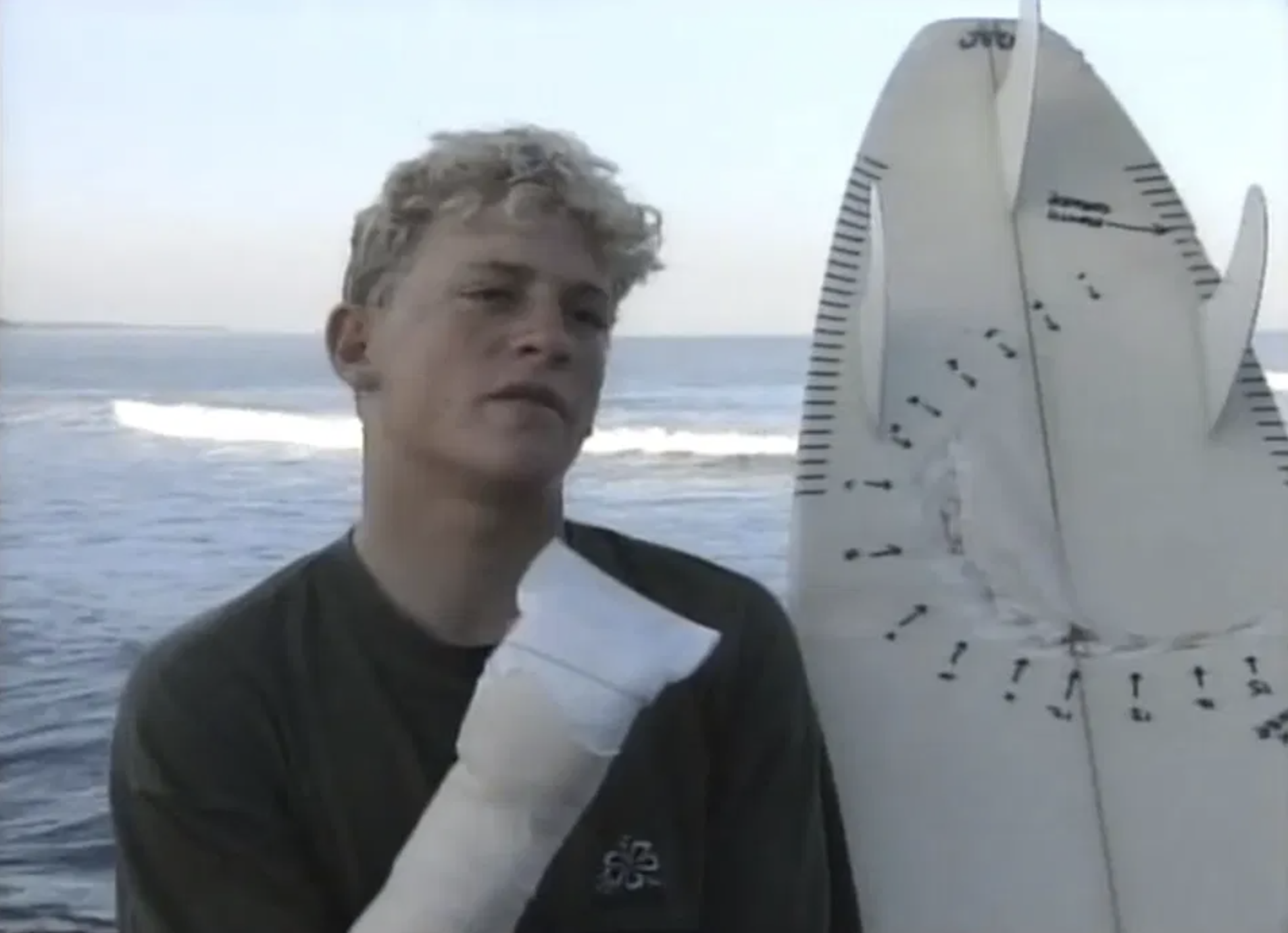 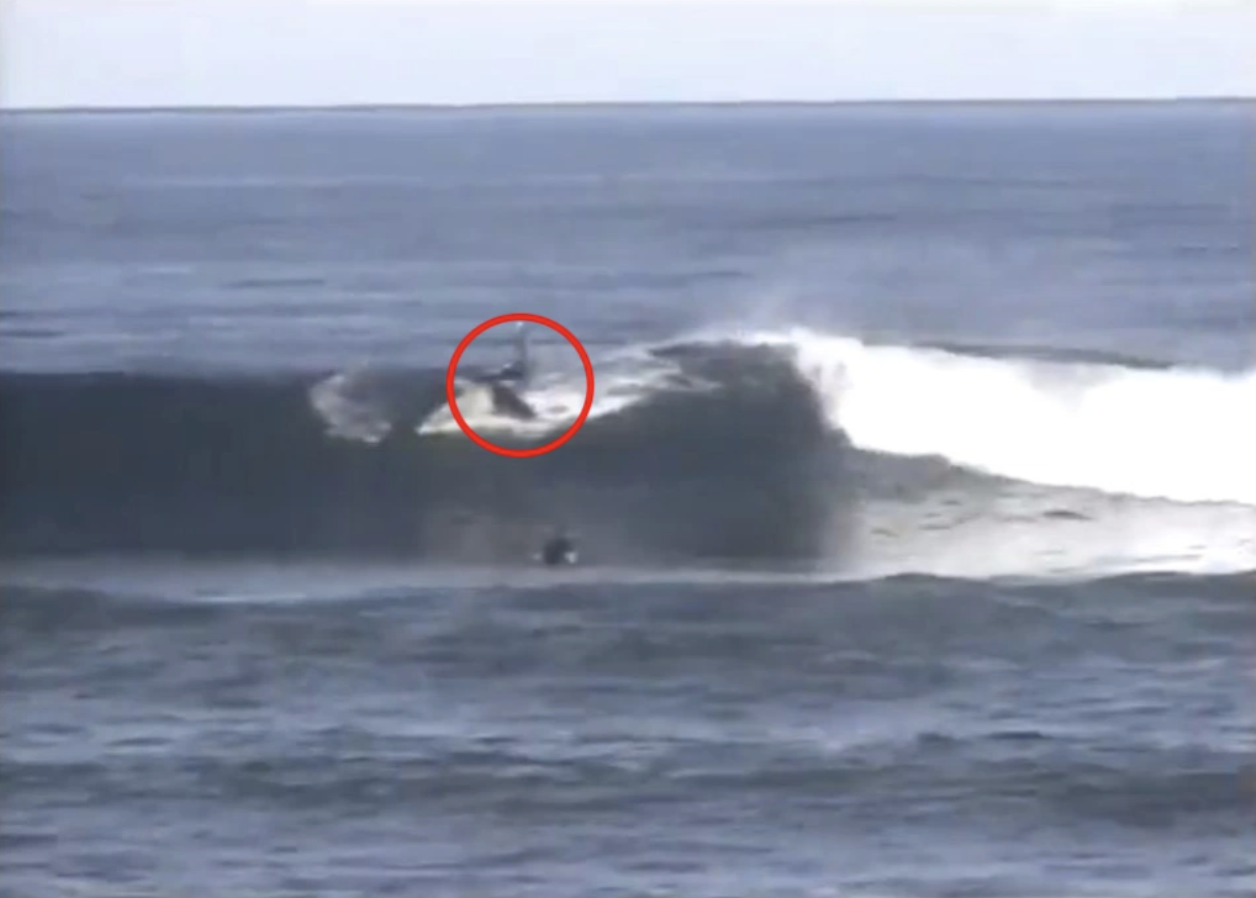 He was surfing in Nahoon Reef, in South Africa, when one of the four-metre sharks took a bite out of his hand, leaving a hole and his wrist bone hanging out.

The second swiped for his head and shoulders but miss because the first got him first – and he believes the commotion scared them both off.

It took Shannon 20 minutes to swim to shore and after a five-hour wait, he received 30 stitches to fix the hole in his hand.

The surfer, who was 15 at the time of his attack in 2000, admitted he was more scared of sharks before the attack than he is now.

But it appears Shannon could be one of the lucky ones, as many have been left with life-altering injuries and some have not survived at all.

Last year, The Florida Museum reported 129 'shark interactions' worldwide, including 57 unprovoked and 39 provoked attacks, and most are non-fatal.

Lisa Mondy said her face was left “like minced meat” after a huge great white shark sank its teeth into her while she was wakeboarding.

The Aussie lost more than half her blood and needed 16 hours of surgery to bring her back from the brink of death after being attacked off the coast of New South Wales, Australia. 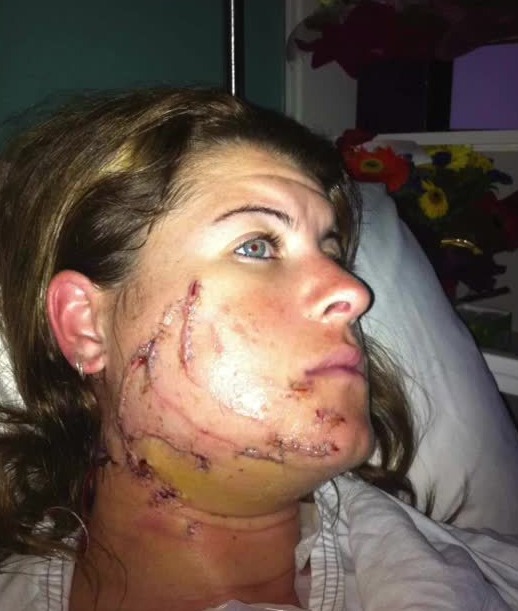 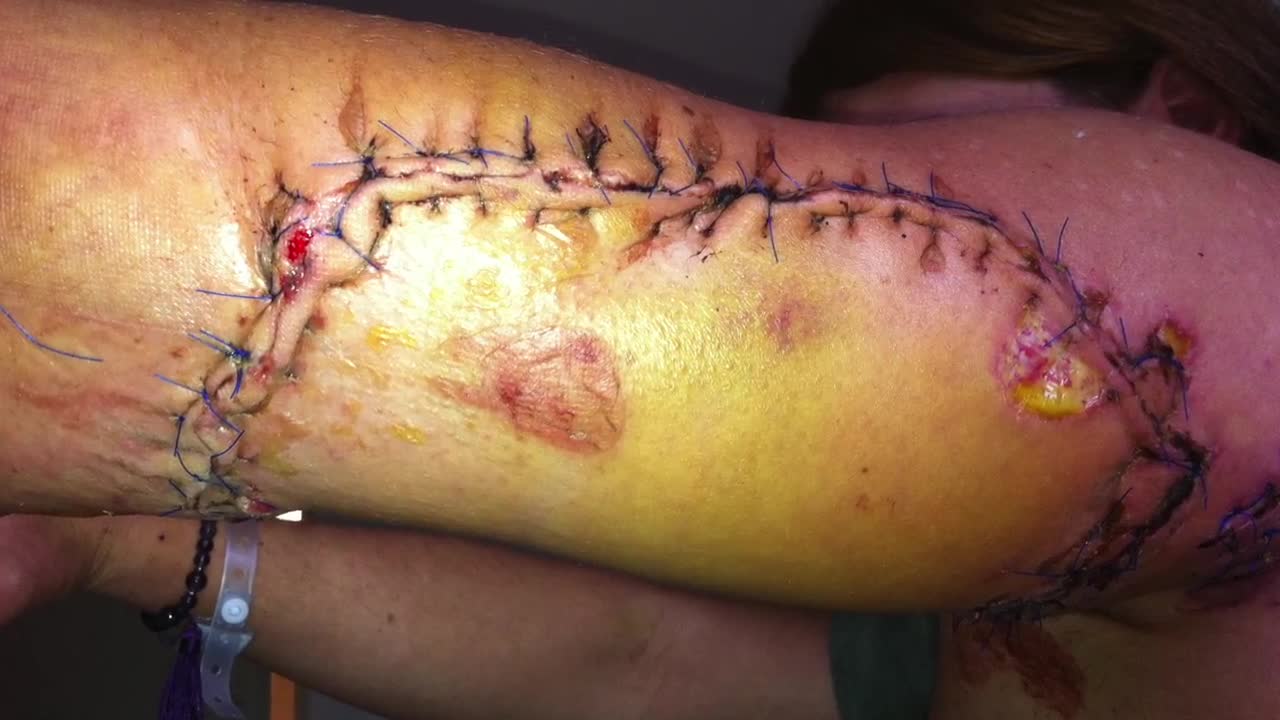 “I was pretty much looking down its throat,” she said.

"I didn't see it coming, the first I knew was when it grabbed my face. My face was like minced meat.

“I lost about as much blood as you can without dying — about 60 per cent.”

Jose Ernestor da Silva was attacked off the Piedade beach near Recife, on Brazil’s north-east coast.

The shark struck just as lifeguards stationed on the beach had told the 18-year-old to come closer to the shore.

He was swimming with his brother and friends in deep waters near the shore, in an area marked by signs warning of shark attacks.

Seeing that the group was drifting further out, lifeguards called for them to return to shallower waters.

His penis and femur were ripped by the bite of what is believed to be a tiger shark, according to medics, and he died later in hospital from his wounds. 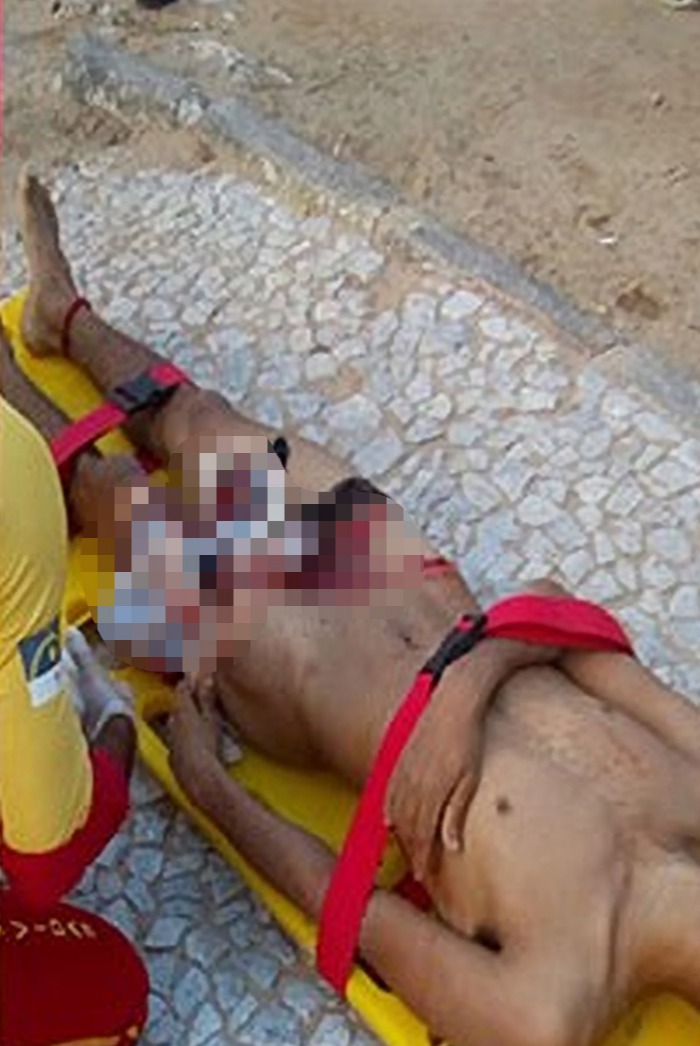 DRAGGED TO THE BOTTOM OF THE SEA

Rodney Fox was 23 when he was dragged to the bottom the ocean by a great white shark off the coast of Australia.

He is generally regarded as being one of the luckiest shark survivors though he was left with 462 stitches – and one of the predator’s teeth in his body.

Rodney was competing in the South Australia Spearfishing Championships when he was attacked on December 8, 1963.

“I felt this huge crash and was hurled through the water. I thought a submarine had hit me,” he told Stories of the South.

Incredibly, the first thing he thought about was tackling the beast and gouging its eye out so managed to get it in a bear hug.

But he had to let go and went back to the surface.

The shark had sunk its teeth into his body, ripping open his lungs and shattering his ribs with his shoulder blade and an artery exposed.

Scenting blood, the fearsome creature returned and managed to get Rodney’s fishing float in his mouth.

The float was still attached to him and the shark then dived to the bottom of the ocean but just seconds away from drowning, the line broke in the shark’s mouth.

Having survived the sinking of their warship, the 900 survivors of the USS Indianapolis were left helpless in the shark infested waters of the Philippine Sea.

The ship had been on a secret mission delivering uranium for the Hiroshima atomic bomb, which was dropped just one week later in August 1945.

On the night of July 30, a Japanese submarine fired six torpedoes at the Indianapolis, and two hit it directly. 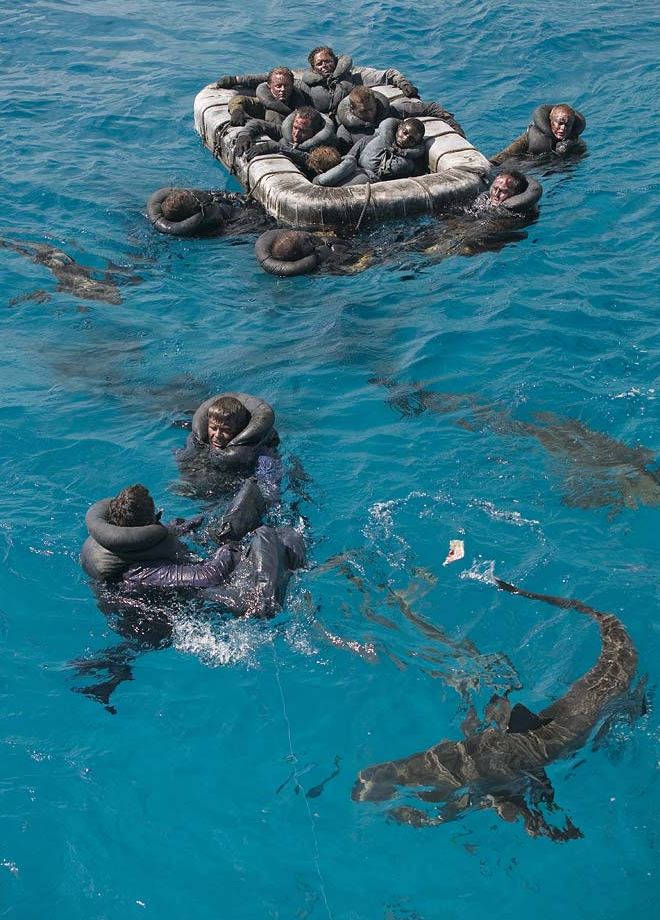 One of those who made it, Edgar Harrell, recalled hearing a “blood curdling scream” as each a victim was dragged under to their doom.

"All we heard was men being eaten alive. Every day, every night," Harrell told The Sun Online.

"You’d find your buddy and check him and find that he’s disembowelled, or the bottom was gone."

Eventually 579 were killed by the beasts before the rest of the survivors were spotted by an aircraft and rescued.

MUM EATEN IN FRONT OF FAMILY

The horrific death of Shirley Ann Durdin remains one of the world’s most infamous shark attacks.

The 33-year-old was killed while diving for scallops in Peake Bay, South Australia while her loving family watched from the shore 150 yards away.

According to eye witnesses, a giant great white shark estimated to be 20ft in length tore her in half.

Her husband Barry reportedly shouted "she's gone, she's gone” as the shark chewed into her bloodied flesh, it has been reported.

Tragically, by the time rescuers arrived at the scene, all that remained of Shirley was a floating headless torso.

And as emergency workers attempted to retrieve her remains, the ruthless shark returned and devoured that as well.

DIED AFTER ARM BITTEN OFF

Marcelo Rocha Santos, 51, had reportedly been drinking with friends before he entered the water and was fatally bitten.

A bystander filmed the body of the victim as he lay motionless on the sand soon after his dip.

He was suffering gruesome injuries that included a missing hand and a chunk bitten out of his leg.

The grisly attack occurred around 2pm at Piedade Beach in the Brazilian city of Jaboatao dos Guararapes.

The beach is said to be a shark-attack hotspot, as it is open and unprotected by reefs.

Marcelo's friends brought the victim to shore, where he fell to the ground unconscious.

While it was not known what kind of shark attacked him, experts say it was likely a bull shark or a tiger shark.

The gruesome deaths occurred off the coast of New Jersey during a heatwave in July 1916.

The first victim was Charles Vansant who bled to death after sharks stripped the flesh off the 25-year-old’s thigh as he went for swim in the early evening.

He was followed by Charles Bruder, 27, who was killed after a shark tore into his abdomen and severed his legs as he swam off the beach.

The youngest to die was Lester Stillwell who was dragged underwater as he splashed in creek with friends.

Stanley Fisher, 24, plunged into the water to search for Stillwell but was himself attacked by the shark and bled to death.