Yahoo News/YouGov poll: Trump is actually doing worse with all white voters than in 2016

At his rally Tuesday in Johnstown, Pa., President Trump briefly veered off script to beseech one particular — and pivotal — slice of the electorate.

“Suburban women, will you please like me?” Trump asked. “Please. Please. I saved your damn neighborhood, OK?”

The president’s tone was lightly mocking, although his reference to saving their “neighborhood” (from low-income housing and the people it would bring) continued his barely disguised appeal to prejudice. 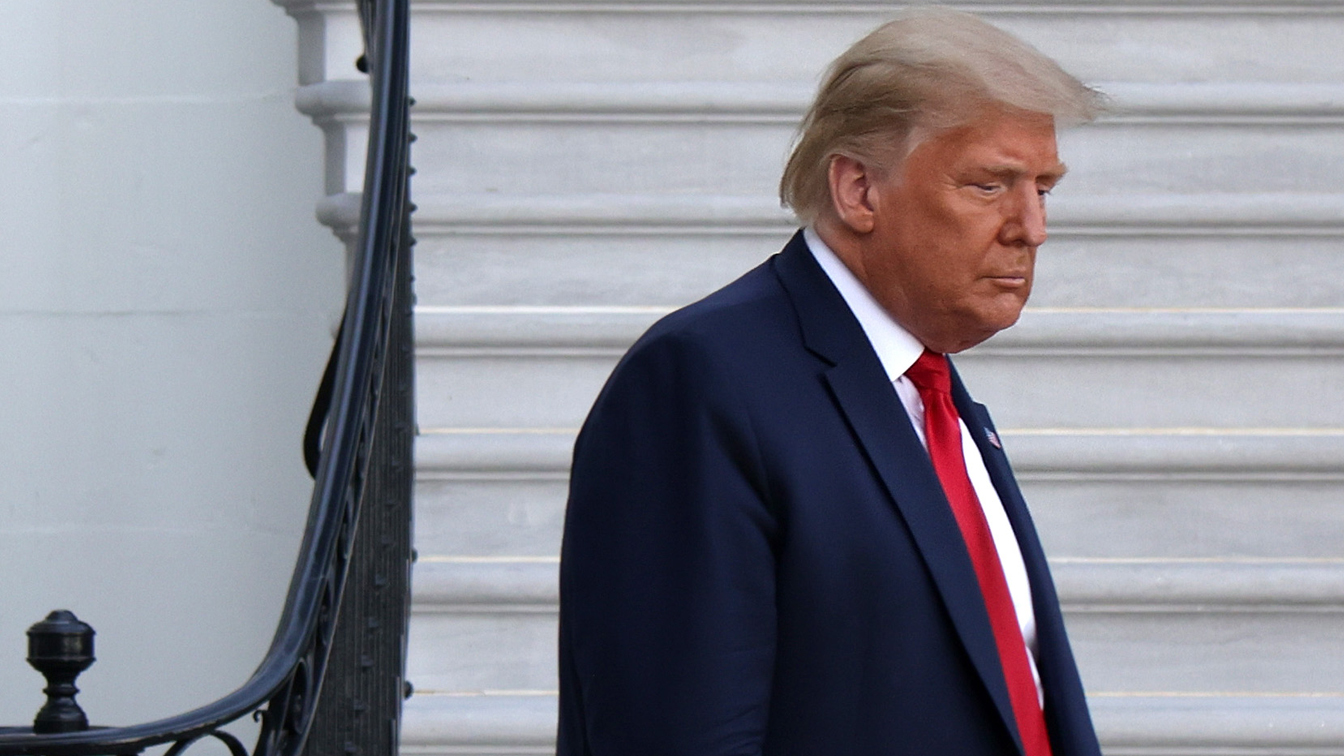 The electoral concerns that provoked Trump’s plea, however, are very real. It’s no secret that the president has struggled with college-educated white women (often referred to as “suburban women,” the successors to “soccer moms”). According to exit polls, he lost them by 7 percentage points to Hillary Clinton in 2016, four years after Republican Mitt Romney won them by 6; in 2018, they broke for Democrats by 20 points, flipping the U.S. House of Representatives.

Yet now, in the homestretch of the 2020 campaign, Trump not only appears to be performing even worse than before among college-educated white women, he’s also doing worse among white voters in general.

By partnering with YouGov to track the views of 13 key demographic groups (including suburban voters, Latino voters and white seniors) across nine important metrics (such as vote intention, Trump approval and the direction of the country), Yahoo News has identified several weak spots for the president among the white voters on whom he has pinned his hopes of reelection. 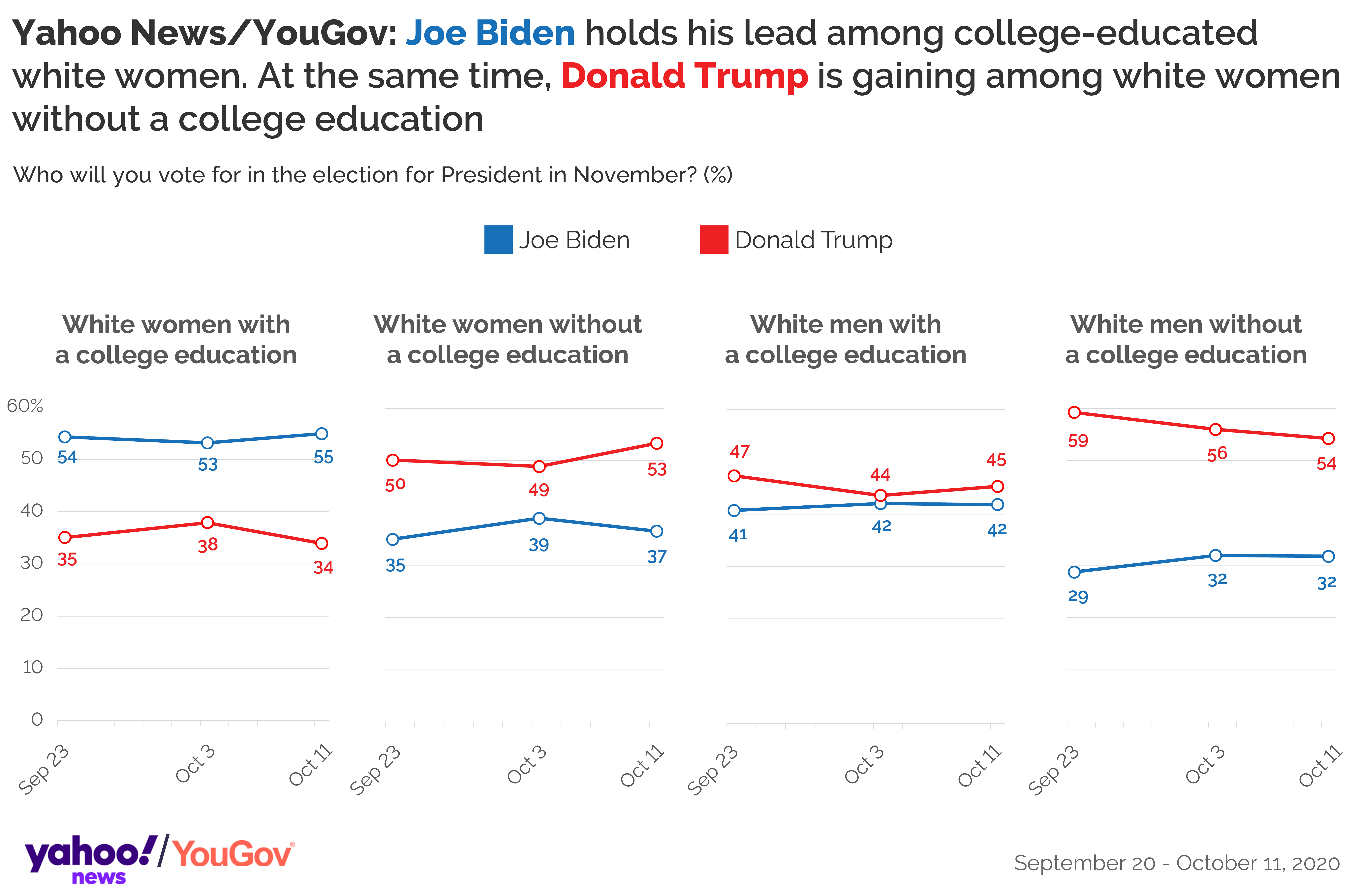 Since the first general election debate (Sept. 29), Trump’s hospitalization for COVID-19 (Oct. 3), his subsequent release (Oct. 6) and his return to the campaign trail (Oct. 12), the president’s support among college-educated white women has fallen to 34 percent while Joe Biden’s has risen to 55 percent. As a result, Biden’s lead among these voters has grown to 21 points — triple Clinton’s 2016 margin.

If Biden’s advantage here were to hold through Election Day, Trump would need to compensate by performing better than he did in 2016 with other white voters. (At the moment, his support among Black voters [7 percent] and Latino voters [28 percent] matches his 2016 numbers [8 percent and 28 percent, respectively].)

But again, Trump is currently faring worse with other white voters, not better.

The one bright spot for Trump is white women without college degrees, who have at least trended in his direction during the past three weeks. On Sept. 25, the president led Biden by 15 points (50 percent to 35 percent) with these voters; today, he leads by 16 (53 percent to 37 percent).

The problem for Trump, however, is that these gains don’t even return him to his 2016 baseline. That year, he won non-college-educated white women by 27 points (61 percent to 34 percent).

White men, meanwhile, seem to be trending away from Trump.

White men without college degrees have been less volatile. On Sept. 25, they favored Trump 59 percent to 29 percent; today, they favor him 54 percent to 32 percent. But in 2016, Trump trounced Clinton with this demographic by nearly 50 points (71 percent to 23 percent). The fact that he’s currently leading Biden by just 22 — a lead that’s shrinking each week — is not a good sign.

To turn things around by Election Day, Trump needs to increase his support among non-college-educated white women and massively improve his numbers with the rest of the white electorate. No wonder he begged “suburban women” in Pennsylvania to “like” him earlier this week. He’s running out of time. This is Chip Gaines’ important advice for couples today Blake Lively Pokes Fun at Ryan Reynolds for His Choice of B-Day 'Cake'
We and our partners use cookies on this site to improve our service, perform analytics, personalize advertising, measure advertising performance, and remember website preferences.Ok