Female jogger, 23, is attacked from behind by three men and pinned to the ground in ‘terrifying’ night time assault

A young woman has warned others not to go out alone in the evenings after she was assaulted by a group of men while jogging in a park near her home.

Cait Smith, 23, was running alone in Castle Park, Colchester when she was grabbed from behind by three men and had her head ‘smashed’ into the ground.

The Essex admin assistant was left with a swollen black eye and scrapes and bruises covering her arms, as she warned fellow women not to venture out alone in the dark.

After posting a warning message about the assault on Facebook, Cait has been inundated with messages of support from thousands of people. 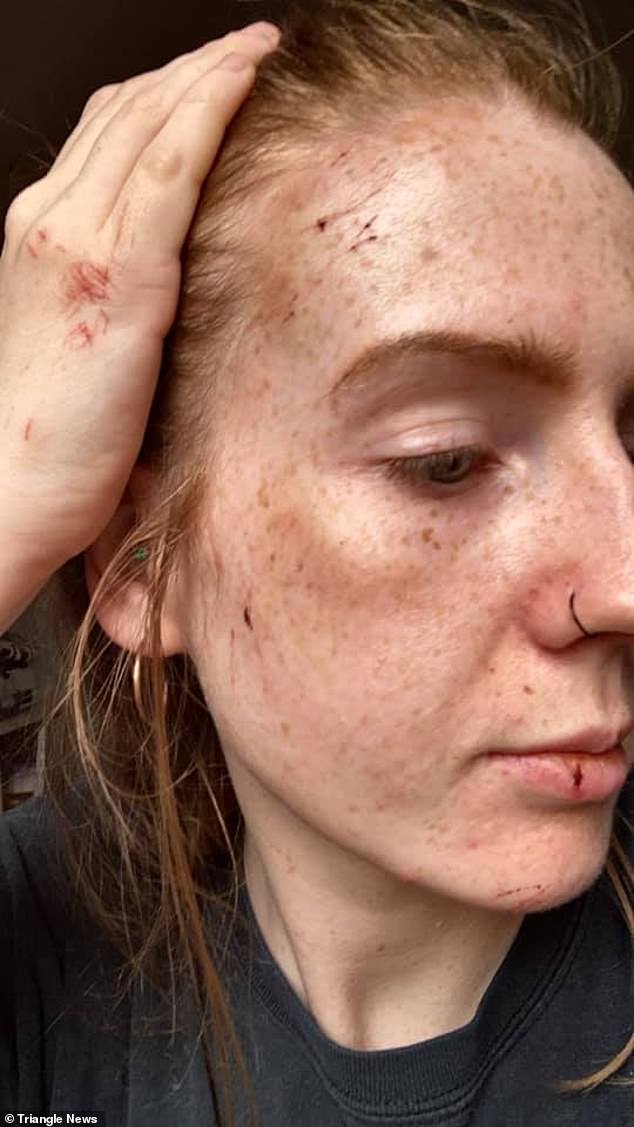 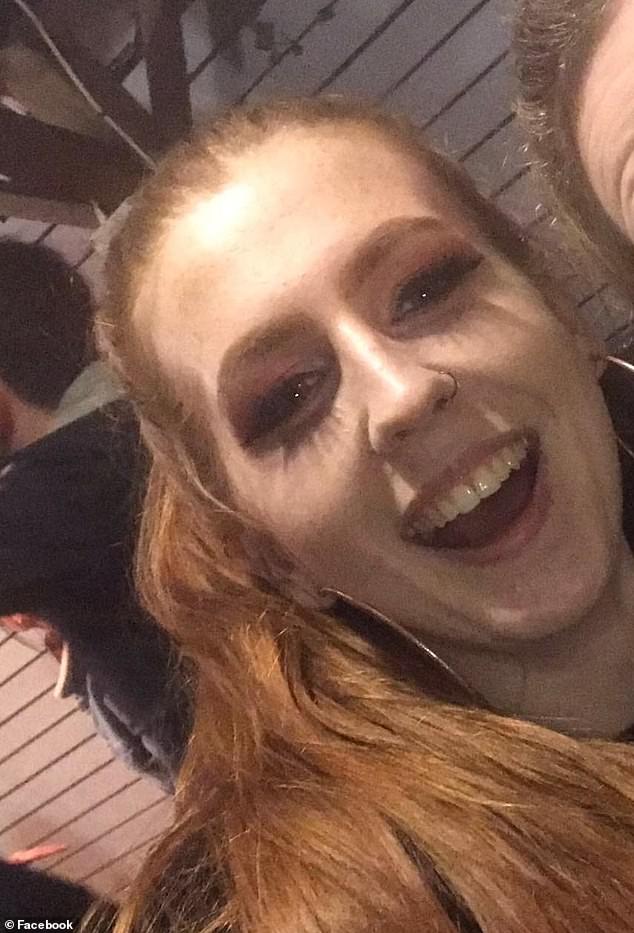 Feisty: Regular jogger Cait (above) was assaulted by three men while on a night run in Essex. The self-proclaimed ‘feisty’ young woman was able to fight off her attackers

Regular runner Cait was jogging on Tuesday night at around 10pm when the assault took place.

She says she normally wears a head torch when jogging through Castle Park at night, and had never previously felt threatened there.

The young woman was grabbed by three men in the brief moment she stopped to change music on her phone.

The 23-year-old said: ‘I was wrestled to the ground, and one of the men was sat on top of me, while another was holding my head to the floor.

‘I’ve been left with a big lump on my face from where they smashed my head to the ground.’

Cait said there were no other people around to come to her rescue, but the ‘feisty’ young woman was able to fight off her attackers.

‘I am lucky that I am quite feisty – I can hold myself in a fight.

‘I don’t think they were expecting me to fight back – so I just fought as hard as I could and then legged it away from them.’

Despite being a regular runner in the Colchester park, Cait says she won’t be returning following the ‘terrifying’ attack. 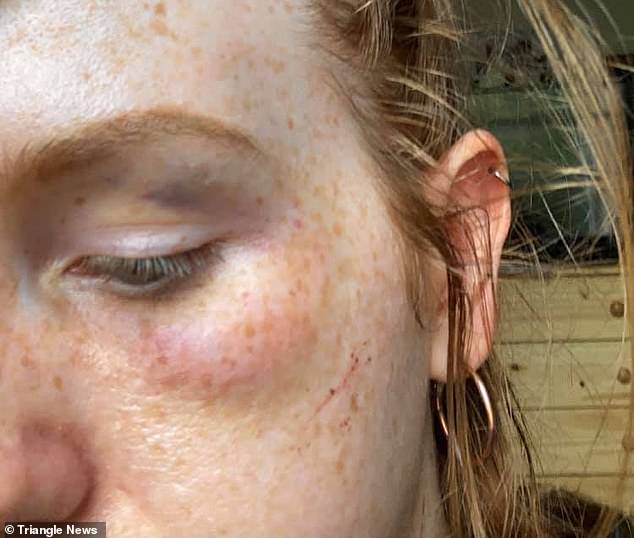 Cait was left with a swollen eye (above), bruises and cuts and scrapes after the attack and she’s now warning others not to venture out alone in the dark

‘I run in Castle Park a couple of times a week, and I’ve never felt threatened down there.

‘I normally wear a head torch when I’m running, so I can keep my wits about me. But typically, this was the one occasion where I forgot it.

‘It’s terrifying that other young people like me should have to live by a different clock out of fear.

‘But that is what I want other people – not just women, but everyone – to be aware of. I don’t want this to happen to anyone else.

‘From now on, when I feel able to go out running again, I’ll be sticking to busier areas.’ 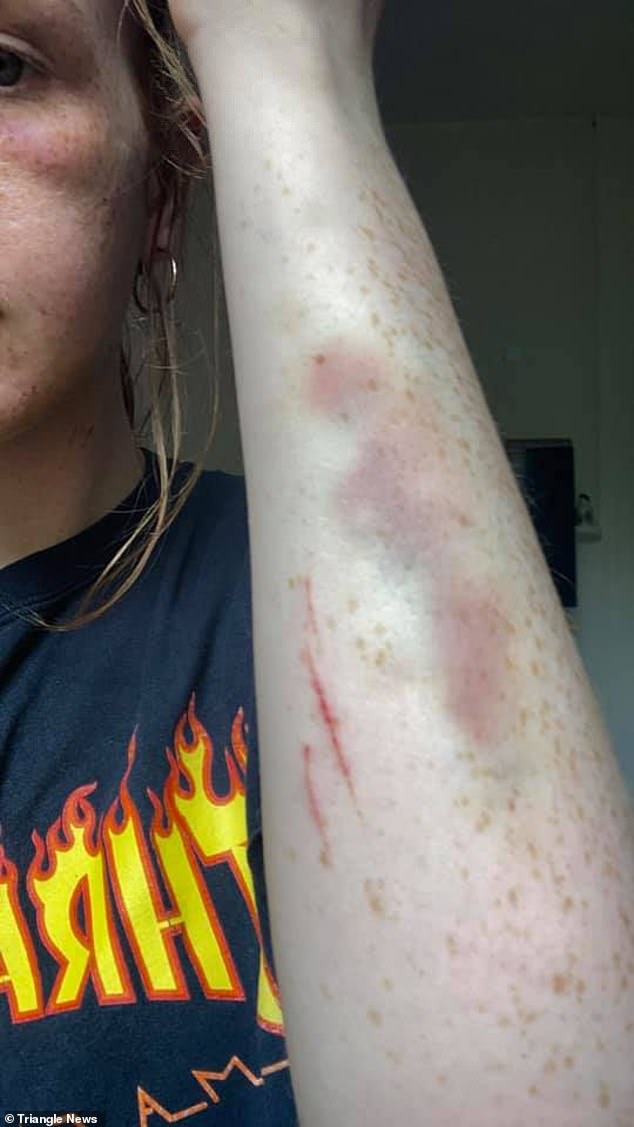 Cait has been flooded with thousands of messages and comments of support since posting on Facebook on Wednesday morning about the assault.

She says that from now on, she will stick to running in the daytime, and in busier areas of the town centre.

And she is now warning other young women and men to be aware of the ‘dangers’ of going out in the dark.

‘It’s not right that women, or anyone, should have to avoid going out at night because of fear that they might be assaulted. Things have to change.’

The attack on Cait was almost exactly two months on from the disappearance of Sarah Everard in South London – a tragic tale that prompted tens of thousands of women to share their stories of feeling unsafe on Britain’s streets.

Essex Police have launched an investigation into the assault and have promised more patrols in the area.

Chief Inspector Jon Evans, District Commander for Colchester, said: ‘I understand this will be a concerning incident for people living across Colchester and use Castle Park regularly.

‘No-one should feel afraid for their safety when going out alone but we are working to identify those involved.

‘Fortunately incidents such as this a rare in Colchester but we have additional patrols in the area to provide some additional reassurance.’