The council area of Brimbank in Melbourne’s west has had the highest number of COVID deaths in Victoria in the first four months of the year, more than its death toll for all of 2021.

Data obtained exclusively from Victoria’s Health Department reveals the areas that have been hardest hit by COVID-19 deaths this year, with all of those areas recording a higher death toll between January and April than in the entire previous year.

Seventy-nine people have died so far this year in Brimbank, compared with 63 in 2021. It had a higher toll in 2020 when 101 people died. The area, which takes in suburbs including Sunshine, Keilor Park and St Albans, has had more than 43,000 COVID-19 cases so far this year. 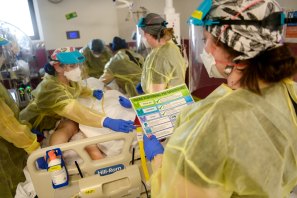 The south-eastern council areas of Casey and Monash have each recorded 74 deaths so far this year, while 65 people have died in Greater Dandenong.

Some of the council areas with the highest COVID-related death tolls this year are among Melbourne’s lowest socio-economic areas.

The data shows there were 798 deaths in the five most disadvantaged council areas from the beginning of the pandemic to April 30 this year, compared with 199 in the most advantaged ones.

Melbourne’s five most disadvantaged council areas (Greater Dandenong, Brimbank, Hume, Whittlesea and Melton) have had more than two times the COVID-related deaths per person over the course of the pandemic than the five most advantaged (Boroondara, Bayside, Stonnington, Port Phillip and Nillumbik). The trend is continuing in 2022, with more people dying in less advantaged suburbs.

Boroondara, which takes in wealthier eastern suburbs including Kew, Hawthorn and Balwyn, has had more cases than Greater Dandenong this year, yet the latter has had more than double the number of deaths (27 deaths compared to 65).

Nationally there have been more than twice as many COVID-19 deaths in the first four months of this year than in the rest of the pandemic.

Brimbank has lost 243 of its residents to COVID-19 since the pandemic began. It is the second most disadvantaged area in Melbourne, according to the Australian Bureau of Statistics.

Sunshine GP Simon Benson said the reason for the high number of deaths in Brimbank was multipronged, but that socio-economic factors could not be ignored.

“Brimbank … is a more disadvantaged area, [and] we know that patients in lower socio-economic groups have lower health literacy [and] a higher percentage of chronic diseases,” he said.

“Those chronic diseases include diabetes, heart disease and other conditions that we know when you mix them with a COVID, they’re likely to have a worse outcome.”

While Brimbank’s first and second vaccination rate is lagging only a little behind the state’s rate of 95 per cent, it has one of the lowest booster rates: 64.8 per cent.

“You’ve got large family gatherings where multiple large families come together on a regular basis, often culturally,” he said.

“And you’ve also got a workforce that largely would have been exempt from a lot of the movement restrictions because they’re essential workers.”

Campbellfield GP Umber Rind said her COVID-19 patients often did not seek care until they were gravely ill.

“There is a lack of understanding of what a serious symptom is,” she said.

Rind said access to affordable healthcare was also a problem.

“Our patients have some of the highest rates of chronic illnesses … which increases their risk of an adverse outcome if they get COVID. Why do we get second-rate care just because we’re not in a rich area?”

Deakin University epidemiologist Catherine Bennett, who is investigating the impact of social and economic disadvantages on COVID-19 deaths, said more data was needed to explain the full picture.

She estimates that less than half of all COVID-19 cases are being reported and suspects that lower socioeconomic areas could have even more unreported cases because of residents’ limited health literacy.

However, not every area with a high COVID-19 death toll is socially disadvantaged.

Monash, which takes in the middle-ring suburbs of Glen Waverley, Clayton and Chadstone in Melbourne’s south-east, is among the city’s more advantaged areas.

Demographer Glenn Capuano, from research firm Informed Decisions, said the difference in the number of COVID-19 deaths between the advantaged and disadvantaged areas was stark and could not be explained away by population age.

“Overwhelming, vulnerability to COVID is in the older population, [but] the most advantaged [areas are more] likely to have a slightly older age structure,” he said.

The spokesman said the government had targeted pop-up vaccination sites in priority areas and a program to support COVID-positive people in vulnerable communities.