Yuppies, bikies and a billionaire: McGowan takes down trifecta of ‘enemies of the state’ in one day

On Wednesday the McGowan government notched up emphatic victories against the holy trinity of enemies of the state: east coast yuppies, a billionaire and bikies.

It was also a day that neatly packaged up WA Premier Mark McGowan’s winning formula – picking an adversary and going for the jugular. 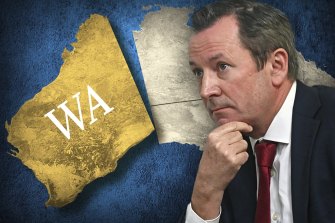 The first win came via a High Court victory against Clive Palmer. Rather dramatically, Attorney General John Quigley declared he had saved even newborn children from a $12,000 tax bill after crushing the mining magnate’s attempts for compensation for a stalled iron ore mine in WA’s Pilbara region.

The second legal victory came as two high-flying Melbourne socialites were sent to prison until the end of the year for thumbing their nose at WA’s hard border policy.

The pair pleaded guilty to fraud and ignoring health directions after they forged documents and told police they lived in the Northern Territory so they could enter the state and attend the AFL grand final.

To McGowan, these blokes epitomised the ignorance many eastern states folks suffer from when it comes to just how serious his government is about keeping COVID out. In the eyes of the WA public, such a harsh penalty for the restaurateur and financial adviser was yet another vindication of this hardline stance.

But the most literal show of strength the WA public has seen from this government was announced by Quigley and WA Police Minister Paul Papalia while flanked by six armed and anonymously masked gang crime squad officers.

They announced the toughest anti-bikie legislation in the country would be introduced to Parliament this week, which will see bikie insignia, including club patches and even tattoos, become more illegal to display in WA than a swastika.

It will also take anti-consorting laws that have been introduced across the country a step further with ‘lower threshold’ dispersion laws that will give police the power to prevent gang members from gathering with each other for a period of up to seven days.

COVID lockdowns and border closures aside, these laws are one of the brashest legislative moves by the McGowan government since it came to power in 2017 and will likely be tested in court by bikies.

However, still pumped up from his Palmer win, McGowan was oozing confidence that they would withstand any challenge – even when it came down to questions of human rights.

“The poor bikies and their poor human rights,” he said.

“I mean, seriously. Does anyone actually take that seriously?

“It’s pretty tough and pretty harsh, but we know what they do, the sorts of stuff they do is awful, and wrong, and evil, and thuggish, and threatening and violent, and causes mayhem, and causes drugs to be spread.”

Mr Quigley explained these laws would name 46 gangs and clubs in the actual legislation, which would avoid problems that anti-association laws had in other jurisdictions where they came unstuck over what constituted a gang.

Curtin University law school organised crime expert Stephen Monterosso said he was hopeful the laws would have some impact on criminal organisations, but a better way was to target their money.

“My view on criminality is, you go for the money and the way to disrupt organised crime is to focus on the generation of profit,” he said.

The government can already pursue unexplained wealth, but the laws are rarely used and there is nothing sexy about lining up a row of heavily armed cops over a dusty old bit of legislation from 2001.

Picking a fight with the bikies and telling them they’ll need to wear makeup makes for great headlines.

Who is McGowan lining up next?