Singapore: Vladimir Putin and Volodymyr Zelensky could face off at this year’s G20 summit in Bali after the Ukraine president revealed he had been invited by Indonesian leader Joko Widodo.

Indonesia has found itself caught between a rock and a hard place after assuming the presidency of the global economic forum this year as Western leaders have pushed for Russia’s expulsion. 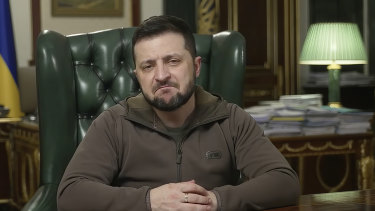 Ukrainian President Volodymyr Zelensky has not said whether he plans to attend the G20 summit.Credit:AP

It faces the threat of a possible boycott if it does not rescind Moscow’s ticket to November’s world leader gathering because of the invasion of Ukraine, a move it has been unwilling to make so far.

However, Jakarta’s hopes of salvaging the summit may be improved if Ukraine, a non-G20 member, is also represented this year and Joko, known as Jokowi, has now reached out to him to attend, Zelensky wrote on Twitter.

“Had talks with President @jokowi… Appreciate inviting me to the @g20org summit,” he said.

Zelensky did not say whether he intended to travel to the summit and Joko did not mention the G20 in a Twitter post of his own on Thursday, saying only that he had “reiterated Indonesia’s support to any efforts for peace negotiations to succeed” and that Jakarta stood “ready to provide humanitarian assistance”.

But Indonesia’s invitation comes after United States President Joe Biden called for Ukraine to be present there. 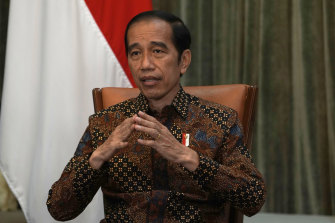 Russia, meanwhile, has indicated that Putin planned in attend in person.

Indonesia’s foreign ministry has said consultation has been continuing with fellow G20 members about participation in the summit, at which global economic recovery from the pandemic is central to the agenda.

Removing Russia from the G20 itself would need a consensus from members – including China – leaving traditionally non-aligned Indonesia in a difficult position as it weighs up the seating plan for Bali.

Former Indonesian foreign minister Marty Natalegawa told The Sydney Morning Herald and The Age last week that the summit must be used as an arena to try and achieve peace in eastern Europe and for that reason required the involvement of both Russia and Ukraine.

Zelensky also thanked Joko for Indonesia’s “support of [Ukraine’s] sovereignty and territorial integrity, in particular for a clear position in the UN”.

Indonesia has been criticised for not singling out Russia and Putin publicly as the aggressor in the war, but it was a signatory to a United Nations resolution last month calling for Russia to “immediately, completely and unconditionally withdraw all of its military forces from the territory of Ukraine within its internationally recognised borders”.

Rizal Sukma, a former Indonesian diplomat and political analyst at the Centre for Strategic and International Studies, said the invitation to Ukraine “reflects Indonesia’s intention to try to secure the participation of all G20 members to the summit in Bali, and creates an opportunity for Russia and Ukraine to try find ways to achieve peace.”

At last week’s G20 finance ministers meeting in Washington DC, delegates from the US, Britain and Canada walked out when Russia’s representatives were speaking.