Harare: One day in late December last year, Violet Gonda stepped off an airliner into the humid heat of a Zimbabwean summer. It was the first time Gonda, one of Zimbabwe's most prominent broadcasters, had set foot in her home country since she was exiled by Robert Mugabe nearly 20 years before – and she was not at all sure she would not be arrested.

"But the immigration official knew exactly who I was. He just said 'Welcome back, Ms Gonda'. He wanted me not to do any journalism. When I objected, he wrote a note and told me to take it to the Media Commission for accreditation." 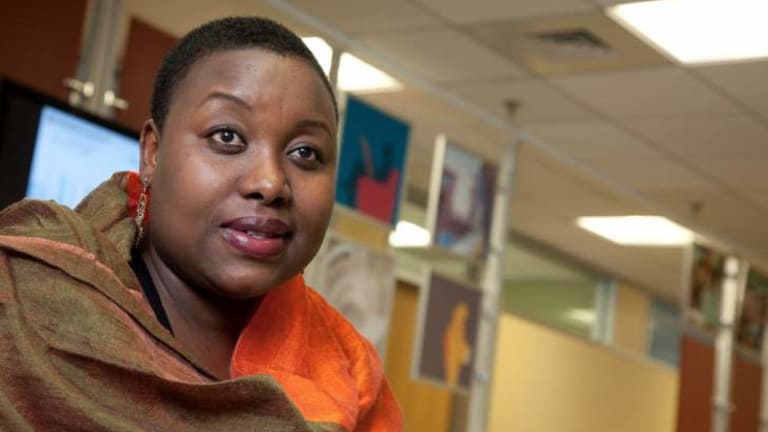 It was a slightly disorienting first encounter with what Emmerson Mnangagwa, the incumbent president, has called his "new dispensation" – a break with Mugabe-era violence and repression to build a new Zimbabwe of pluralism, free speech, and genuine democracy.

Since then, she has been pondering the question every Zimbabwean has asked since Mugabe's 38-year reign was ended by a military coup in November: has Zimbabwe really changed? If so, how much? And will it last?

Public demand for meaningful change has been clear ever since thousands took to the streets of Harare to party when news broke of Mugabe's arrest by the military on November 14, and both the main presidential candidates in Monday's historic presidential election are vying for the mantle of reformer.

Mnangagwa, the 75-year-old veteran of the liberation war who served Mr Mugabe loyally for decades, says only he has the credibility, experience and influence with the army and the deep state to deliver that change. 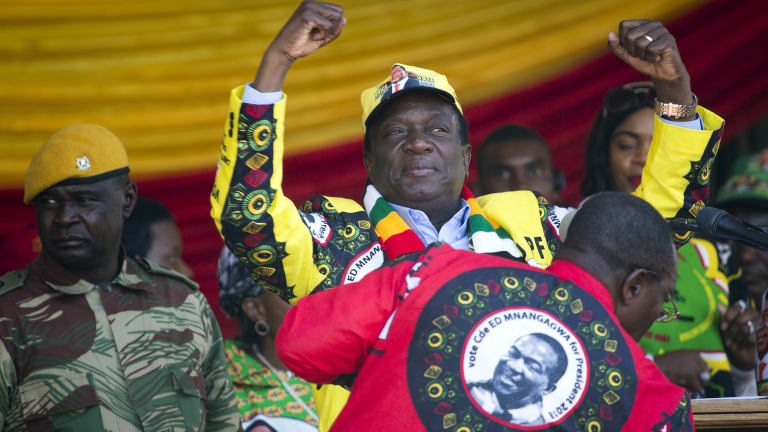 Zimbabwean President Emmerson Mnangagwa addresses the final rally of his campaign at the stadium in Harare, Zimbabwe, on Saturday.

"That is why I call myself a listening president," he told a crowd of several thousand in the village of Mubaira, two hours drive south of Harare, earlier this week.

"We need transparency. We have a new dispensation. Now we have a united Zimbabwe, let us commit to peace in the country."

Nelson Chamisa, the 40-year- old lawyer and lay preacher leading the MDC Alliance, says those with recent memories will know that to be utter rubbish. Mnangagwa, he says, is knee-deep in the blood of thousands murdered by Mugabe's regime over the past four decades; he is as culpable as anyone for two decades of economic mismanagement that has brought the country to the brink of collapse, and represents a moribund gerontocracy that still stakes its legitimacy on a liberation war that ended 40 years ago. 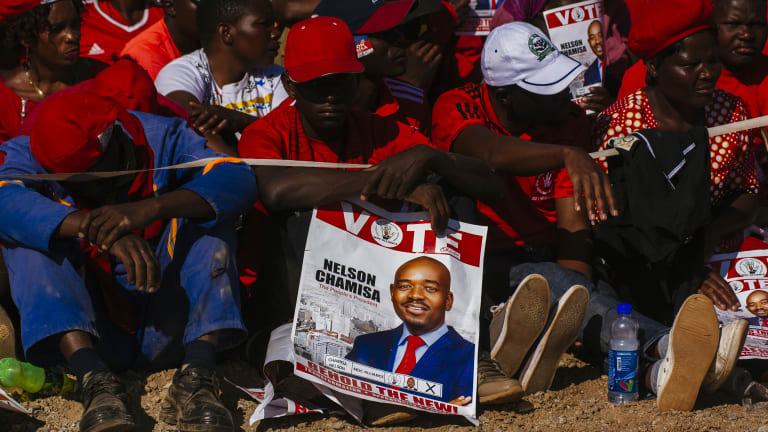 A supporter holds a placard showing Nelson Chamisa, leader of the Movement for Democratic Change (MDC), during a campaign rally in Harare, Zimbabwe, on Saturday.

"Nothing has changed," Mr Chamisa said during a break in campaigning.

Some 1600 MDC activists have been murdered over the past 20 years, he says. No one has  been prosecuted for those crimes.

But nowhere are the memories more bitter, and the test of the "new dispensation" more crucial, than in the western province of Matabeleland.

Between 10,000 and 20,000 people were killed between 1983 and 1988 when Robert Mugabe unleashed a North Korean trained death squad, Fifth Brigade, on the political stronghold of the rival ZAPU party. Responsibility for the "Gukuharundi" massacres goes well beyond Mugabe.  Mnangagwa was Mugabe's intelligence chief at the time. Perence Shiry, who commanded Fifth Brigade, is currently the agriculture minister. 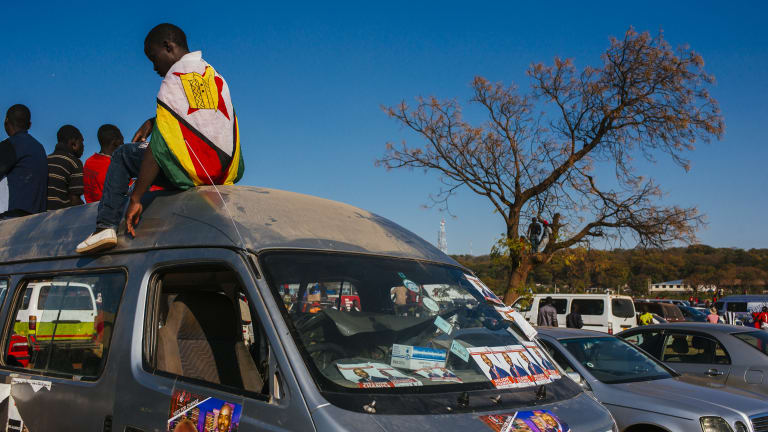 A supporter wearing a Zimbabwean national flag while sitting on top of a vehicle during a campaign rally in Harare, Zimbabwe, on Saturday.

"It was the longest period of mass atrocity on the greatest scale that Zimbabwe has had, including the liberation war," said Shari Eppel, a forensic anthropologist from the region who is leading a new effort to uncover the graves of the victims. "It happened under Zanu PF. There are questions to answer."

Mnangagwa has ruled out apologising "as an individual". But in January he set up a national peace and reconciliation committee, modelled on the post-apartheid commission in South Africa, to launch an inquiry.

"On economics, sure, maybe he will change something. But I am very sceptical about human rights," said Lovejoy Ncube, who as a 22-year-old was tortured in a concentration camp during the Gukurahundi.

Nonetheless something has changed in Zimbabwe – and it is not just the vanishing of the police roadblocks that routinely used to shake down motorists for bribes. An unfamiliar air of normality has settled over the country, and people are talking to one another without wondering whether Mugabe's Central Intelligence Organisation is listening in. 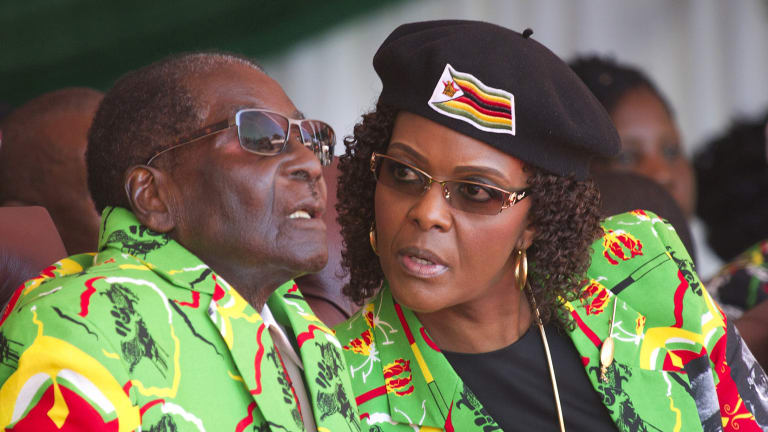 Former Zimbabwean president Robert Mugabe, and his wife Grace pictured during a youth rally in June, 2017.

Chamisa has been able to campaign openly and ferociously, and has for the first time penetrated rural areas once closed to the opposition – drawing immense crowds in the process. Gonda has been able to host debates between rival candidates, international media have been granted access, and there has been very little violence or voter intimidation.

"These elections are very different," laughed Paul Themba Nyathi, a former MDC activist who was once jailed by Mugabe. "They are boring. That's a very unusual experience."

But 38 years of dictatorship do not vanish overnight. And the electoral playing field is anything but level. One TV station, four "public" radio stations and a further four private stations are owned or controlled by Zanu PF aligned media houses.

The Herald, the state-owned and supposedly neutral newspaper, has regularly misquoted  Chamisa, accusing him of promoting violence and of being in an electoral pact with Grace Mugabe, the widely hated former first lady.

Diplomats and senior Zanu PF figures have confirmed to The Telegraph that the international community has presented Mr Mnangagwa with a stark choice.

If he delivers tangible political change (the first test being a free and fair – or at least credible – election tomorrow), Zimbabwe has effectively been promised a return to the Commonwealth and relief from US sanctions that currently block desperately needed IMF loans.

However, Michelle Gavin and Todd Moss of the US council on foreign relations said after a recent visit to Zimbabwe that they found Mnangagwa "a great pretender."

"Unfortunately, we came away convinced that what we witnessed was more political theatre than good faith and that the United States should be deeply wary," they said in a statement.