Britney Spears goes TOPLESS and apologizes to her sons after clapping back following claims her social media use is for ‘attention’ but vows to continue to post: ‘I’ve got news for you!’

Britney Spears uploaded a new video onto her Instagram earlier on Friday, adding a caption to reference her new collaboration with Elton John, and to send her apologies to her sons.

The Baby One More Time singer, 40, modeled an assortment of outfits in the clip, while additionally posing without a shirt, using her long locks or a hat for coverage.

The star recently responded in a separate post to her 15-year-old son, Jayden’s, comments he made during an interview that aired on ITV News on Friday, telling him to, ‘pick up a book and read one,’ while also slamming her ex-husband, Kevin Federline.

New post: Britney Spears, 40, shared a new video on her Instagram on Friday along with a detailed caption

The star began the video of herself posing in a green, cropped shirt along with a pair of classic, jean shorts. She showed off a few poses in the outfit of her choice.

The clip then transitioned to Britney only wearing shorts, with her long locks falling in front for coverage. She then was seen donning only underwear and held a black hat in front of her chest, showcasing her best runway walk.

Towards the end of the reel, the singer donned a sheer, pink shirt with a lace pattern at the top. Britney paired the shirt with form-fitting, white jeans along with brown heels.

In the caption to her post, the Gimme More hitmaker began to reflect on her newest collaboration with Elton John with their track, Hold Me Closer, which released last month on August 26.

‘GEEEZ see it hits me later … the fact that I’m doing a song with Elton .. makes me wanna freaking cry… he’s me and my mother’s favorite musician … I listened to driving hours to dance class from 8 to 14 … see again WHHATT THHE F*** !!!’

Topless: In her newest video, the pop singer went topless when she was modeling a few of her outfit choices 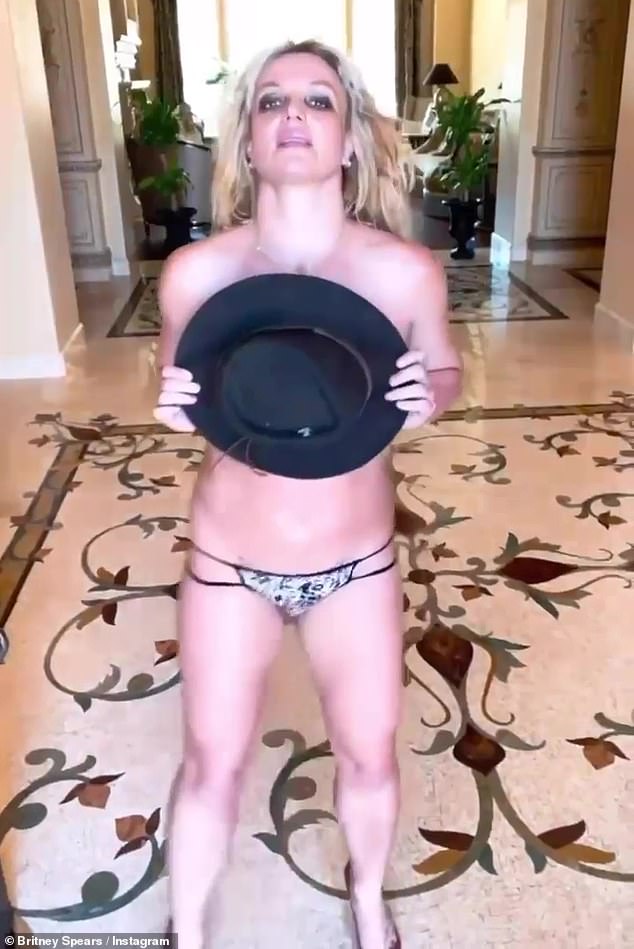 Son’s response: The star’s youngest son, Jayden, 15, interviewed about his mother which premiered on ITV News earlier on Friday, stating, ‘It’s almost as if she has to post something to get attention’ in response to her social media use

After expressing her excitement to have had the opportunity to work alongside Elton, she then began to state how talented her two sons are.

‘Wow wow, what an honor to be with such gifted hands !!! WE ALREADY KNOW !!! My son might give him a run for his money !!! I have soooooooo much footage of him playing … yep my children are freaking geniuses !!!’

‘It’s kinda scary … he stopped seeing me,’ Britney typed, commenting on the current situation with her son, Jayden, and 16-year-old, Preston. Last month, the Mail on Sunday revealed that Britney hadn’t seen her sons for months.

‘I posted something of him, but he got really mad so unfortunately, I haven’t been able to post my loving family.’

Britney then went on to formerly apologize to Jayden and Preston for her social media use. ‘Either way I’m so sorry children I continue to do social media … I’m sorry you feel I do it for attention … I’m sorry for the way you feel.’ 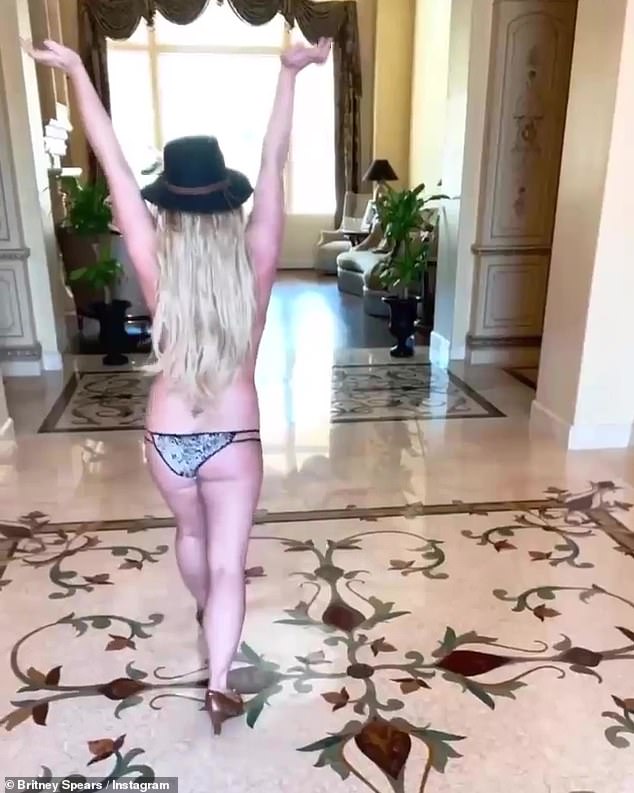 Will stay on social media: Despite her son’s claims she uses social media for attention, Britney stated she will continue to post

Apologies: In her caption, the star took time to write out to her sons, ‘I’m so sorry children I continue to do social media’

However, Britney concluded that she will continue to post on Instagram. ‘but guess what ???? I’ve got news for you … I’m a child of God as well we all are in God’s eyes … so NOPE I’m not sorry … I’ve learned to say SO !!!’

During his recent interview Jayden commented on his mother’s use of social media. On her regular Instagram posts, which sometimes see her pose naked and address her fans with lengthy paragraphs, the teenager shared his thoughts.

Describing his father, Kevin’s, home as their ‘safe place’, he said he can ‘process the emotional trauma we’ve been through’ there – however did not specify what he was alluding to. 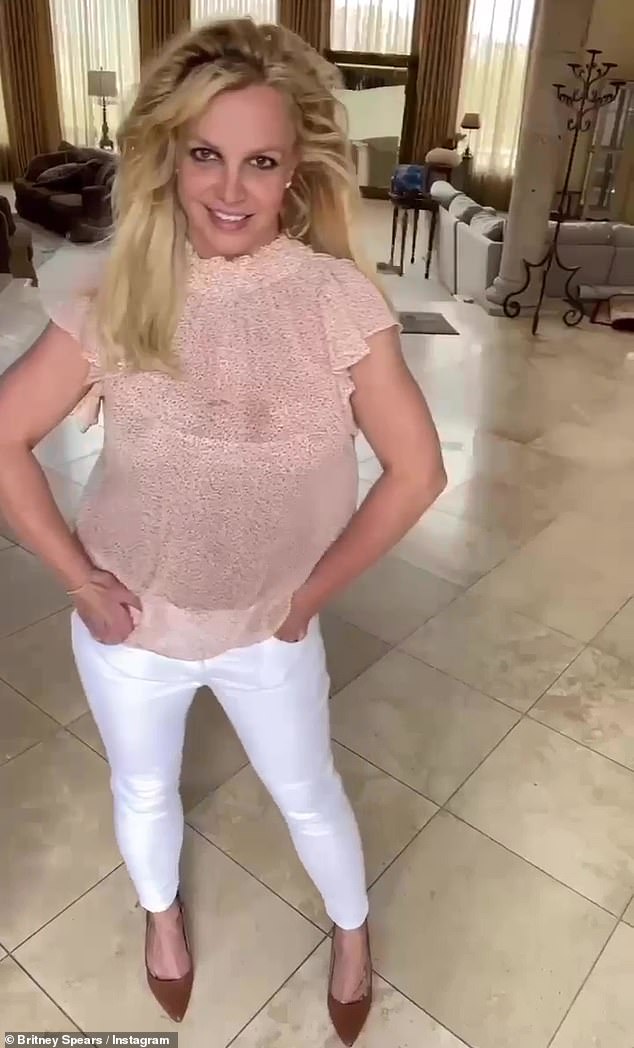 Still on social media: Britney stated that she was ‘not sorry’ for not quitting social media

He added that he believes her 13-year-long conservatorship went on ‘a little too long’ before her emancipation last November, but that her dad Jamie Spears had only been ‘trying to pursue her dream’ in the beginning.

During the ITV News segment, Jayden claimed that Britney didn’t show the brothers love equally and confirmed they hadn’t seen their mother in months, choosing not to attend her wedding to Sam in July.

However, Jayden, did express that his tarnished relationship with the chart-topper can be fixed, however it’s going to take ‘a lot of time’.

The pop star responded that night with a freewheeling Instagram tirade in which she told Jayden to ‘learn to pick up a book and read one’ and accused Kevin of ‘smoking pot every day’, quipping that he should ‘try and at least mow the lawn’. 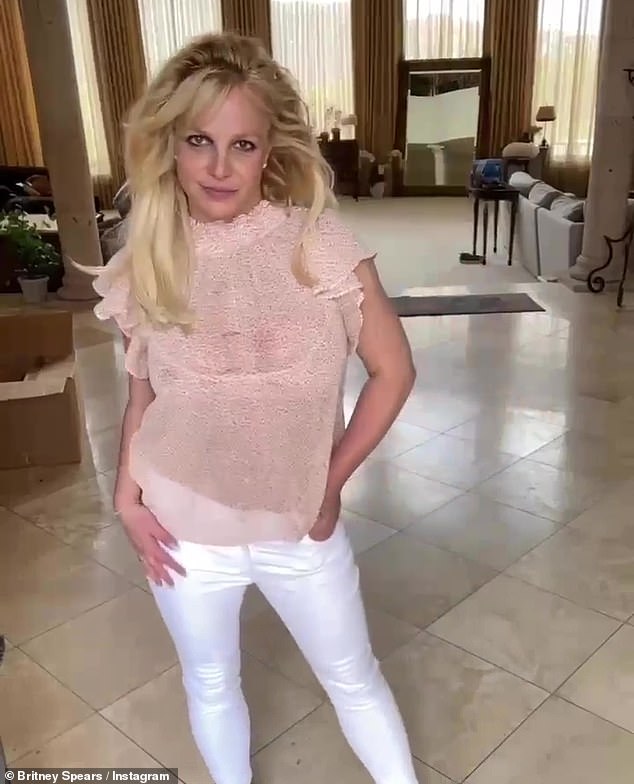 Future relationship: Jayden did express that his tarnished relationship with the chart-topper can be fixed, however it’s going to take ‘a lot of time’ 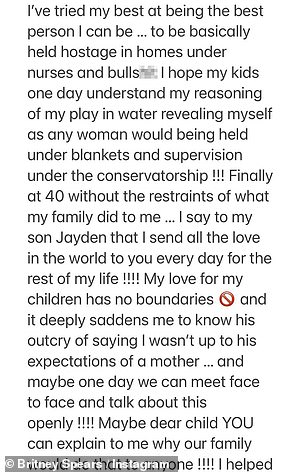 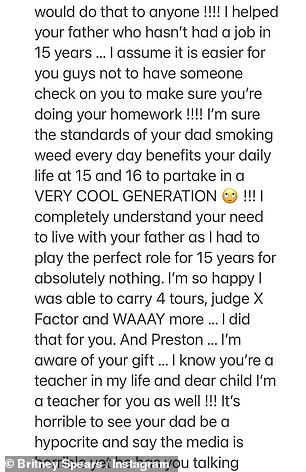 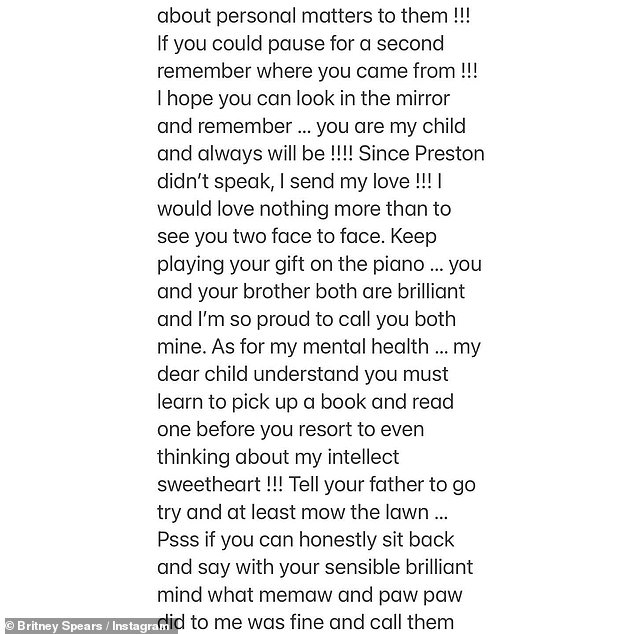 Hopeful: Jayden, who lives with his brother Sean Preston, 16, at Kevin’s Los Angeles home – revealed he does want to see Britney again, despite their differences

In the post, an impassioned Britney penned: ‘I’ve tried my best at being the best person I can be … to be basically held hostage in homes under nurses and bulls*** I hope my kids one day understand my reasoning of my play in water revealing myself as any woman would being held under blankets and supervision under the conservatorship !!!’ she began.

She then told Jayden, ‘I send all the love in the world to you every day for the rest of my life !!!!’

‘Maybe dear child YOU can explain to me why our family would do that to anyone !!!! Britney then angled the statement towards Kevin. ‘I helped your father who hasn’t had a job in 15 years …’

‘I assume it is easier for you guys not to have someone check on you to make sure you’re doing your homework !!!! I’m sure the standards of your dad smoking weed every day benefits your daily life at 15 and 16 to partake in a VERY COOL GENERATION !!!’ 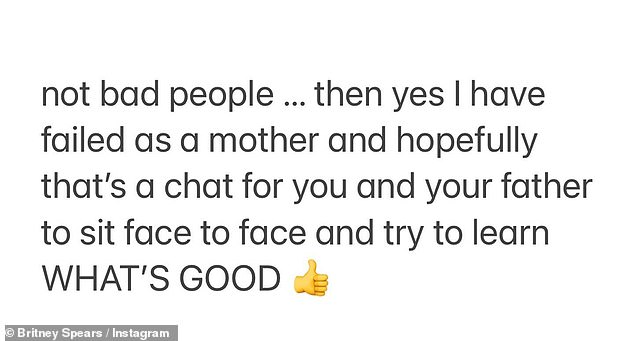 Slamming her ex: The pop star slammed her ex-husband, Kevin, and accused him of ‘smoking pot every day’

Reunion: When talking about her two sons, Britney stated, ‘I would love nothing more than to see you two face to face’

She went on: ‘I would love nothing more than to see you two face to face. Keep playing your gift on the piano … you and your brother both are brilliant and I’m so proud to call you both mine.’

Her tone abruptly switched from affection to derision as she wrote: ‘As for my mental health … my dear child understand you must learn to pick up a book and read one before you resort to even thinking about my intellect sweetheart !!!’

She concluded her lengthy statement by slamming her ex-husband, Kevin, once again, and typed ‘Tell your father to go try and at least mow the lawn …’

‘Psss if you can honestly sit back and say with your sensible brilliant mind what memaw and paw paw did to me was fine and call them not bad people … then yes I have failed as a mother and hopefully that’s a chat for you and your father to sit face to face and try to learn WHAT’s GOOD.’