Harry Styles: 'I just popped over to Venice to spit on Chris Pine'

‘Just popped to Venice to spit on Chris Pine!’ Harry Styles jokes about THAT viral incident as he performs at Madison Square Garden

Harry Styles played up the controversy surrounding his recent run-in with Chris Pine on Wednesday as he performed his Love On Tour: Madison Square Garden Is Harry’s House gig.

The singer and actor, 28, joked about a viral incident at the Venice Film Festival on Sunday, where it looked like Harry had spat on his Don’t Worry Darling co-star as they sat next to each other at the film’s premiere.

Fans were sent into a frenzy after they spotted the former One Direction heartthrob seemingly spitting at Chris, 42, as he took a seat next to him at the premiere of Don’t Worry Darling. 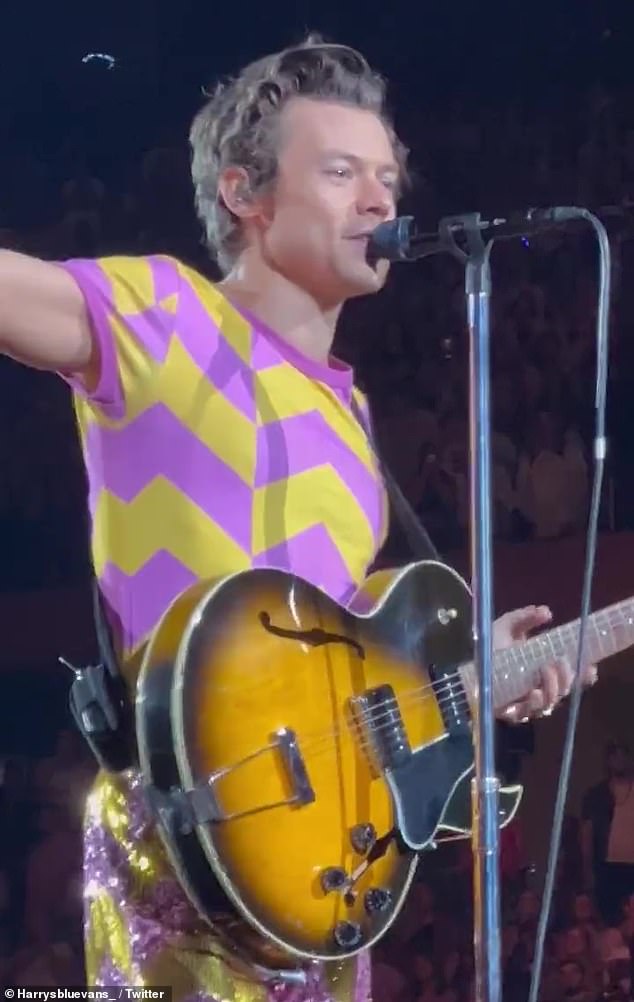 The latest: Harry Styles, 28, on Wednesday played up the controversy surrounding his recent run-in with actor Chris Pine, 42, whose reps denied that Styles spit on the actor as the pair sat next to one another at the Venice Film Festival. Styles was snapped in NYC playing MSG

Harry caused a stir after he allegedly approached his chair and appeared to spit in the actor’s lap in front of his director girlfriend, Olivia Wilde, 38.

During the bizarre interaction, Chris – who was clapping as Harry took his assigned seat next to him – seemed to stop in his tracks, look down at his leg, and stick out his tongue in disbelief.

The laughing actor then shot an amusing look back at the pop star – who was too busy adjusting his jacket and smiling around the room to notice Chris’ cheeky reaction.

A source close to Chris Pine MailOnline: ‘Harry Styles did not spit at all. People are seeing some odd illusion of sorts online that is clearly deceiving.’ 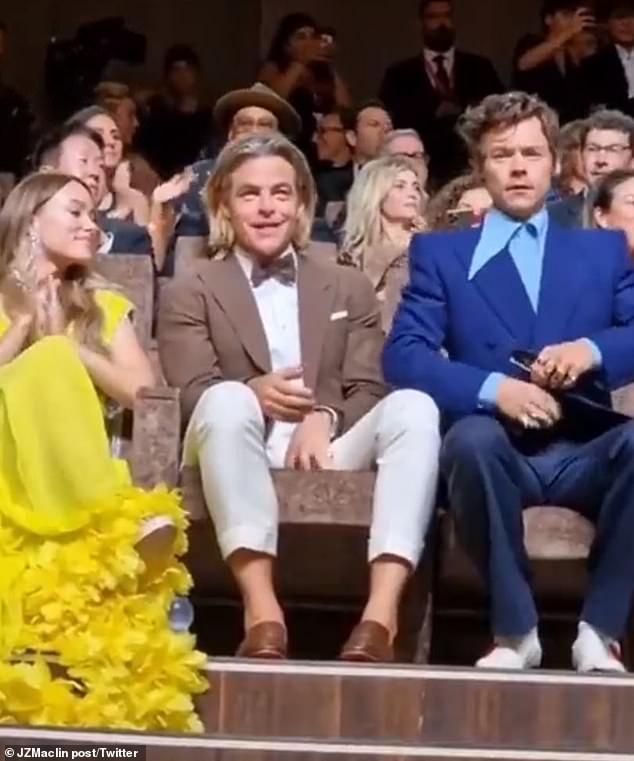 New: As if the behind-the-scenes drama on the Don’t Worry Darling set hasn’t been awkward enough with the film’s premiere in Venice, a possible new wrinkle has surfaced 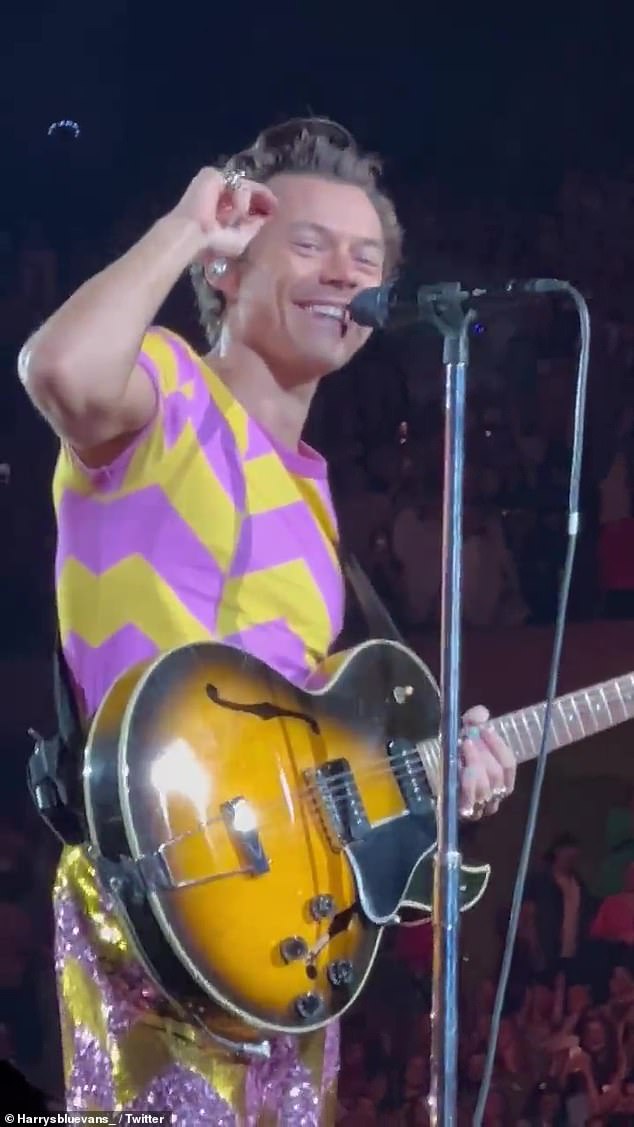 Styles donned a striped yellow and purple shirt for the show 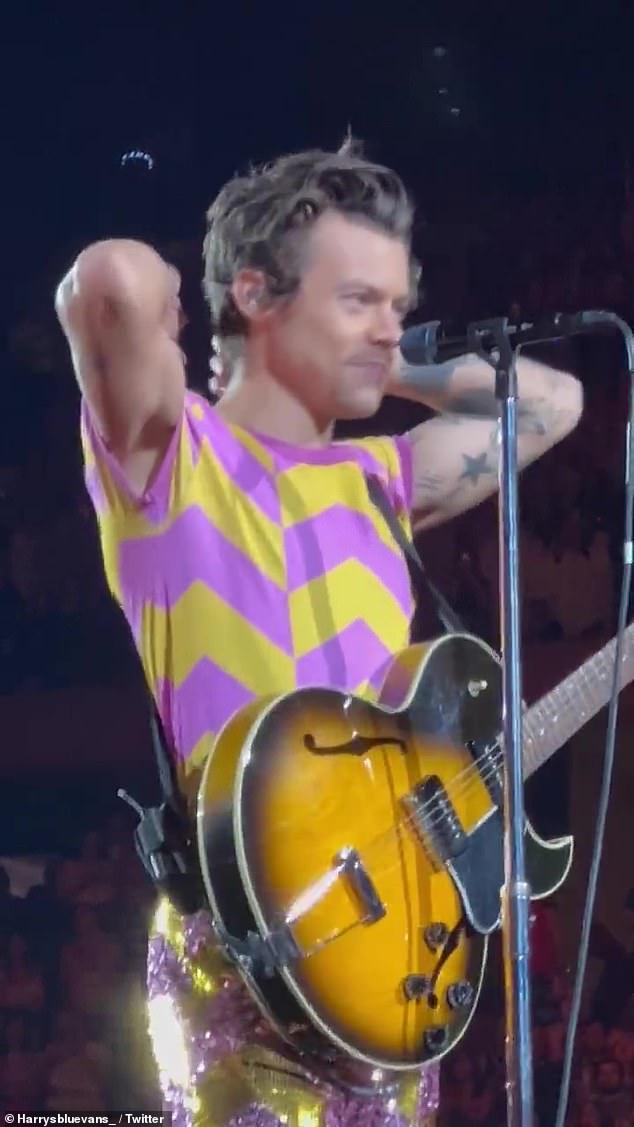 Chris’ representative told People: ‘Just to be clear, Harry Styles did not spit on Chris Pine.

‘There is nothing but respect between these two men and any suggestion otherwise is a blatant attempt to create drama that simply does not exist.

This is just the latest instalment of drama surrounding the actors in Don’t Worry Darling.

In 2021, troubled star Shia LaBeouf was fired from the movie after reportedly clashing with Wilde on set. Something that Wilde appeared to confirm in an interview.

However, in August 2022, LaBeouf provided evidence to Variety that Wilde had sought to keep him on the film. Part of that evidence saw Wilde speak disparagingly about the movie’s lead, Florence Pugh. 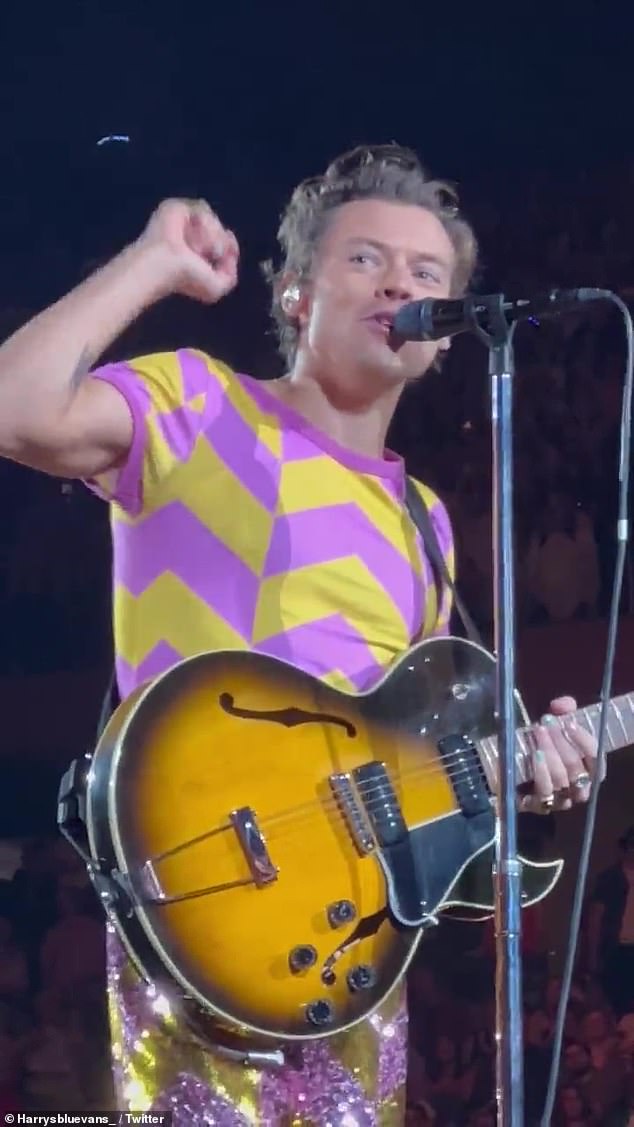 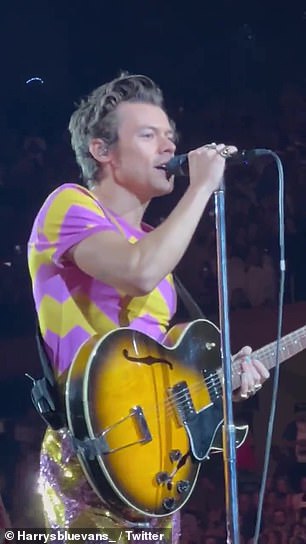 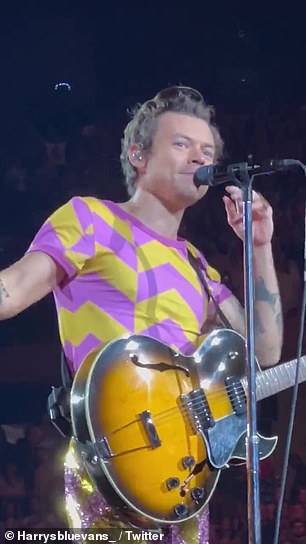 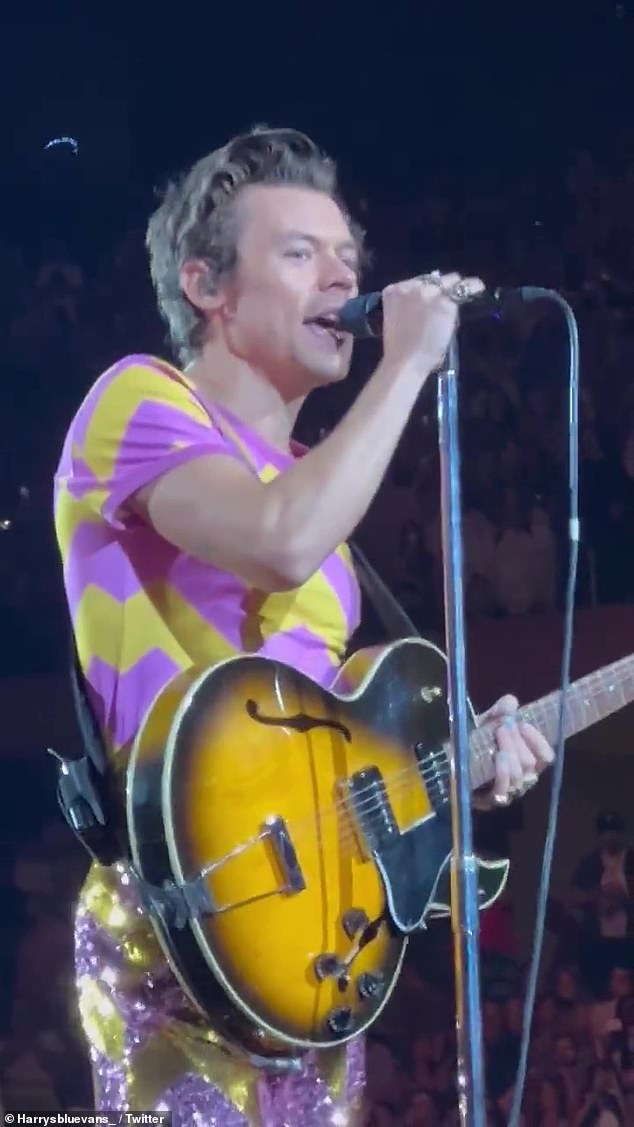 Styles is on his Love On Tour: Madison Square Garden Is Harry’s House 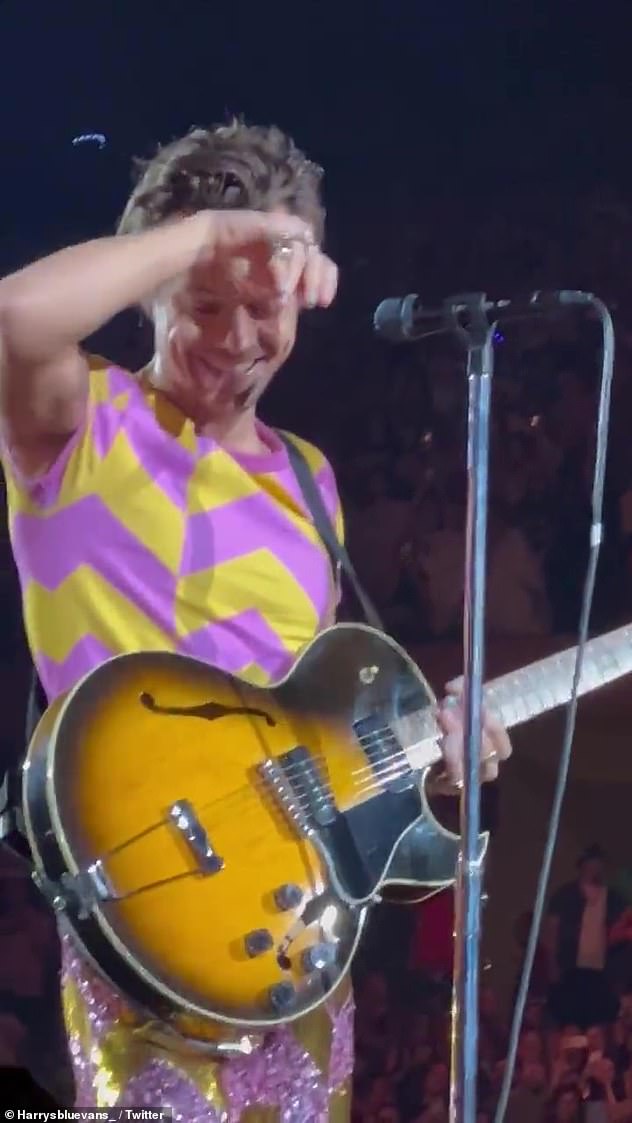 Styles is set to conclude his Madison Square Garden residency September 21 before embarking on multi-night appearances in Austin, Chicago and Los Angeles later this fall

That led to more reports that Pugh and Wilde had beef on set. In the lead-up to the film’s release, Pugh did little-to-no promotion for the movie.

In a red carpet interview just prior to the alleged spitting incident, Pine spoke lovingly about his time working with Pugh.

The rumor now is that Styles, Wilde’s boyfriend, saw this as a sign that Pine was taking sides in the argument and this is how he reacted.

Another video from Variety’s Ramin Setoodeh shows another angle of Styles taking his seat, and seemingly lasts a few seconds longer.

This video also appears to show Pine and Styles chatting briefly, though it’s unclear what was said during the interaction.

Styles seems to be having a relatively polite conversation with his co-star, which seems as if it would be unlikely if he had just spat on him. Sources have since confirmed this is not true. 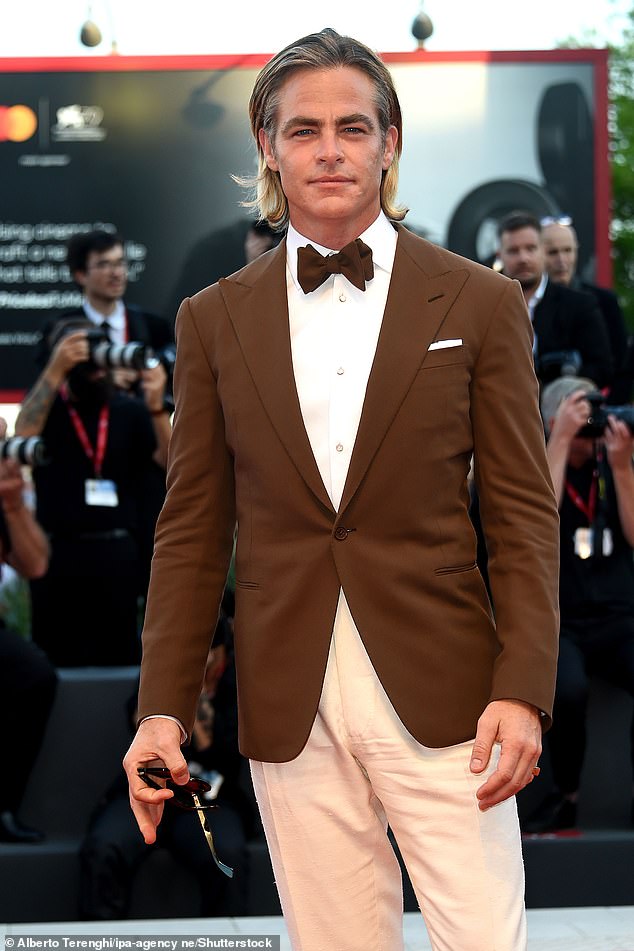 Comment: Neither Pine nor Styles have commented publicly on the supposed incident, though this theory has no shortage of support on Twitter 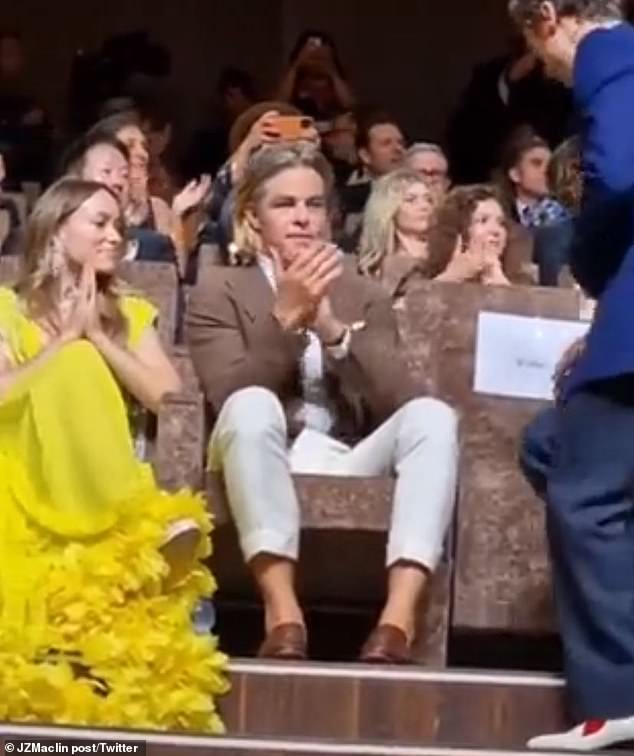 Spit: When Styles gets to his seat, he slightly bends over Pine before sitting down, a motion which some have speculated is Styles spitting on Pine 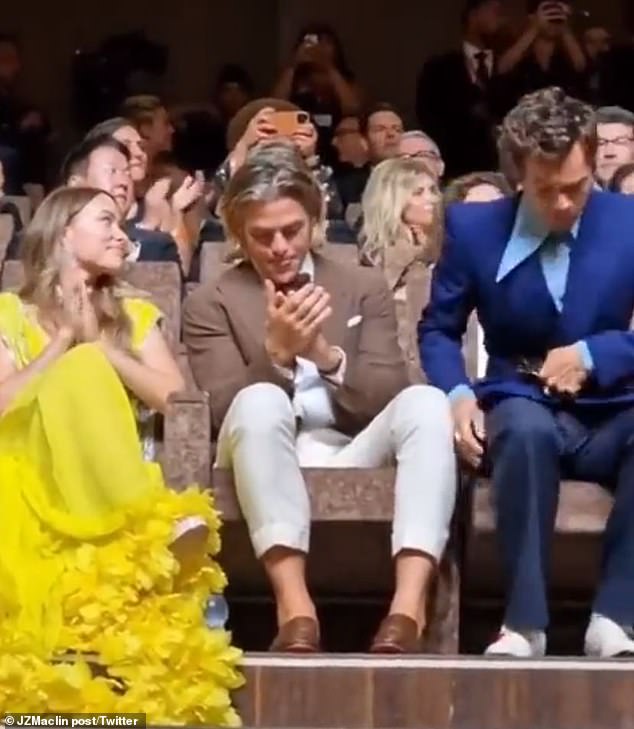 Immediately: Immediately after Styles made that motion, Pine abruptly stops clapping and looks to his lap before he starts laughing as the brief video comes to an end 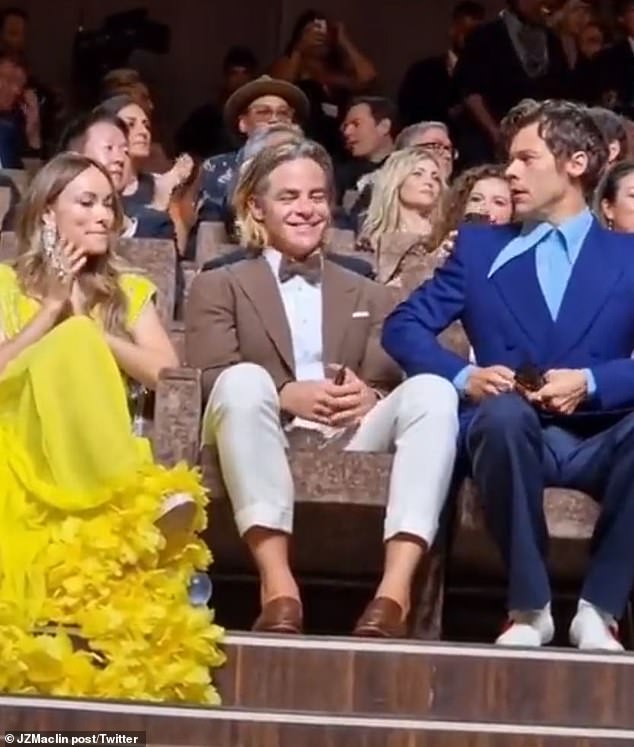 Another: Another video from Variety’s Ramin Setoodeh shows another angle of Styles taking his seat, and seemingly lasts a few seconds longer

Oddly, this isn’t the first time that spitting may have gotten Styles negative publicity.

For years, fans of the former One Direction star embraced his routine at concerts where he would take a gulp of water and then spit it out at the crowd. The move was known was a ‘the whale.’

In September 2021, when Styles took to the stage in Las Vegas in his first concert since the Covid-19 pandemic, Styles performed the whale.

He was roundly criticized for the move.

One fan wrote on Twitter: ‘I love you dearly. But it’s Covid. Please stop taking a drink from water bottles then throwing it on people and doing the whale.

‘That’s…an incredible amount of germs. I know most of us would let you spit in our mouths but just maybe retire it for this tour? No hate.’

Another tweeted: ‘I am a directioner but dear god?? harry just spit in front of the crowd? in the middle of the pandemic and he’s getting praised because of it? how tf.’

Coincidentally, during the height of his One Direction days back in 2013, Styles was quoted as saying that he would never date a woman who spat in public.

The singer said: ‘I don’t think I’ve ever dated a girl who’s spat. I mean when you drive down the street and you see somebody spit? That’s gross.’

The videos caused quite a stir among many on Twitter, with even Setoodeh himself adding more speculative fuel to the fire with a quote-retweet of his own tweet, hours after the video was taken.

‘Coming from the #DontWorryDarling premiere tonight, this is all I can say: There are no trash cans in the Sala Grande — not in the lobby or in the mezzanine where these seats are located.

‘So hypothetically, if you were chewing a piece of gum, there’d be no place to put it,’ Setoodeh said.

No place: ‘Coming from the #DontWorryDarling premiere tonight, this is all I can say: There are no trash cans in the Sala Grande — not in the lobby or in the mezzanine where these seats are located. So hypothetically, if you were chewing a piece of gum, there’d be no place to put it,’ Setoodeh said 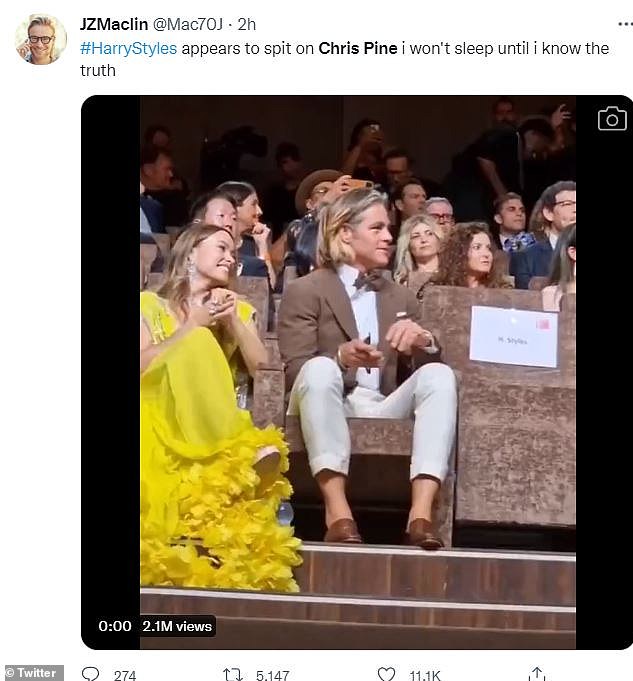 Truth: ‘#HarryStyles appears to spit on Chris Pine I won’t sleep until I know the truth,’ he said 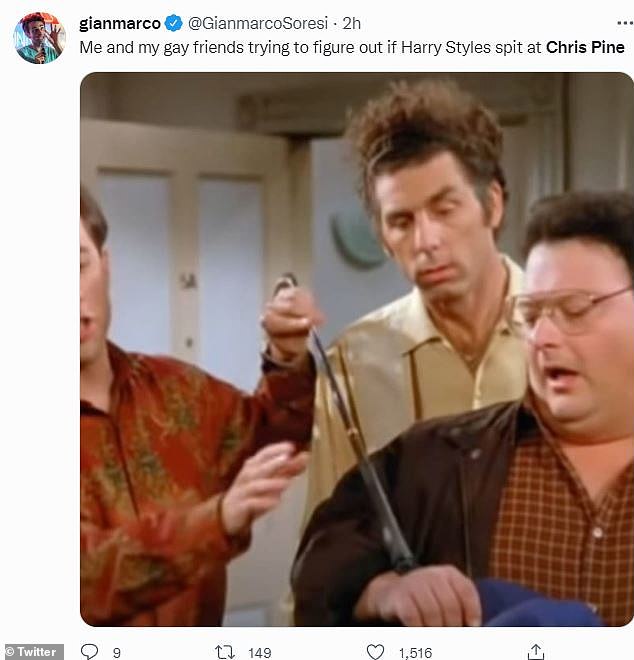 Seinfeld: Others like @GianmarcoSoresi compared the supposed spit to an episode of Seinfeld entitled The Boyfriend, where Kramer (Michael Richards) and Newman (Wayne Knight) tell a wild tale about New York Mets player Keith Hernandez spitting on Kramer 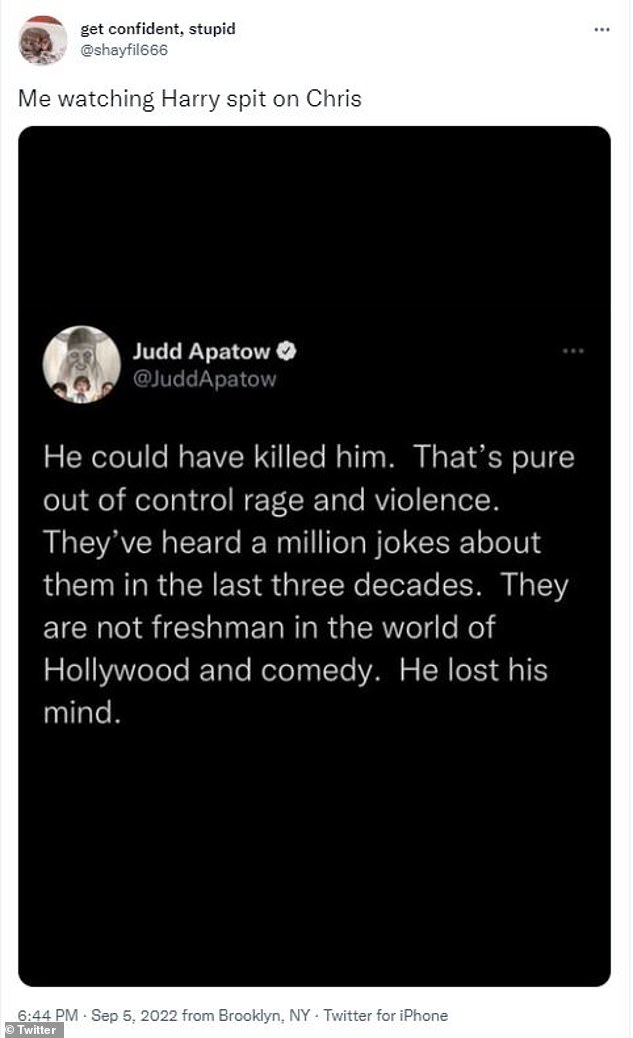 While Setoodeh didn’t tweet any further about the spit debacle, plenty of other Twitter users did, including @Mac70J, who shared the video and stated, ‘

‘#HarryStyles appears to spit on Chris Pine I won’t sleep until I know the truth,’ he said.

Others like @GianmarcoSoresi compared the supposed spit to an episode of Seinfeld entitled The Boyfriend, where Kramer (Michael Richards) and Newman (Wayne Knight) tell a wild tale about New York Mets player Keith Hernandez spitting on Kramer.

Soresi shared an image from that episode in his tweet, adding, ‘Me and my gay friends trying to figure out if Harry Styles spit at Chris Pine.’

Mystery: @RegardingJosh added, ‘Whether or not Harry spit on Chris is gonna be one of the great mysteries of our time. Like what Bill Murray whispered at the end of Lost in Translation or Who bit Beyonce’

Herde: @been_herde added, ‘the ‘I did not spit on that man’ notes app apology Harry Styles will soon be forced to tweet is already shaping up to be an all-timer 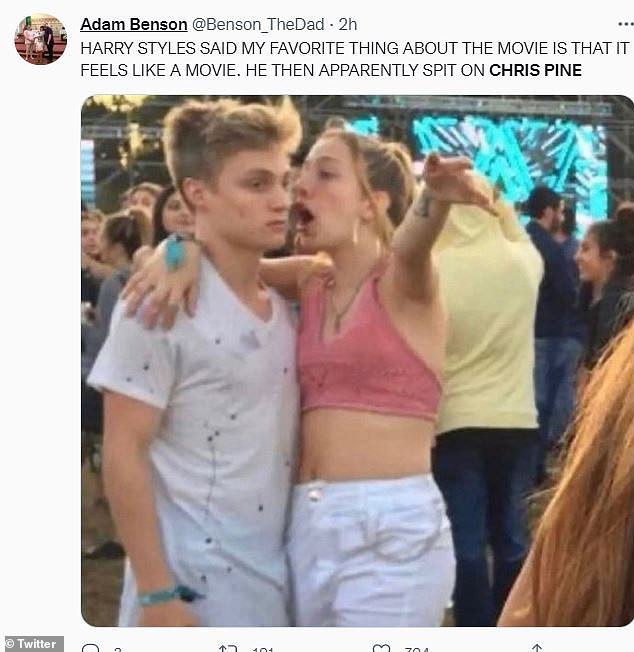 Benson: @Benson_TheDad added, ‘HARRY STYLES SAID HIS FAVORITE THING ABOUT THE MOVIE IS THAT IT FEELS LIKE A MOVIE. HE THEN APPARENTLY SPIT ON CHRIS PINE’ 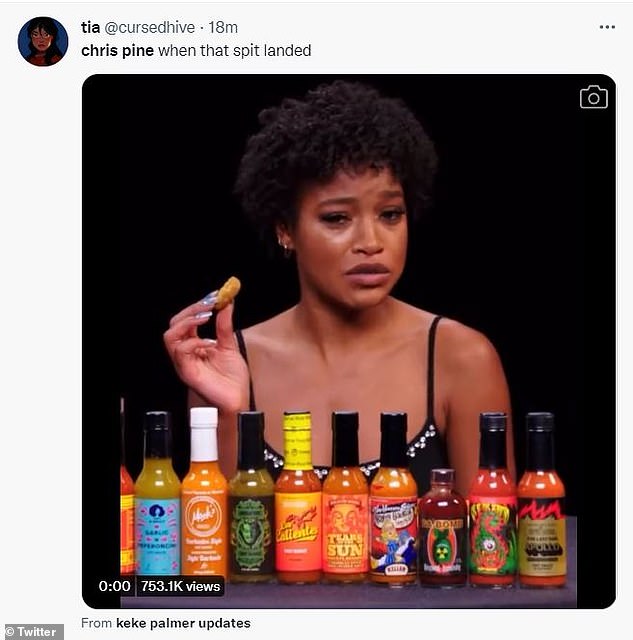 Landed: @cursedhive added a photo of Keke Palmer on Hot Ones adding, ‘Chris Pine when that spit landed’ 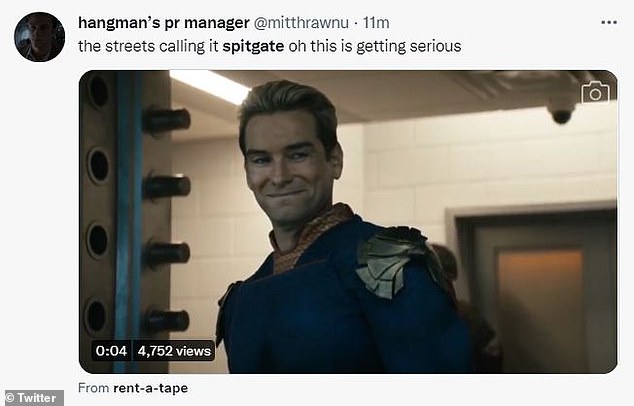 Streets: @mitthrawnu added, ‘The streets calling it spitgate oh this is getting serious 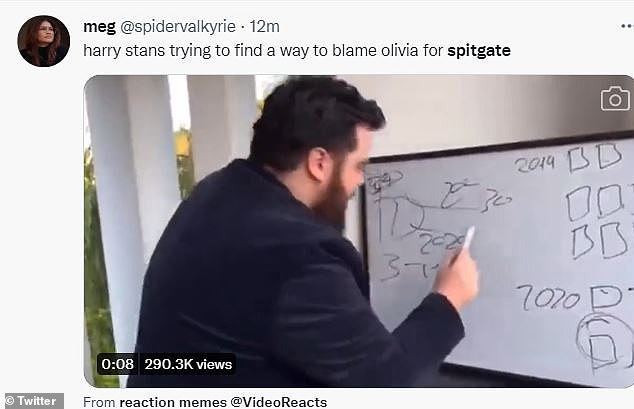 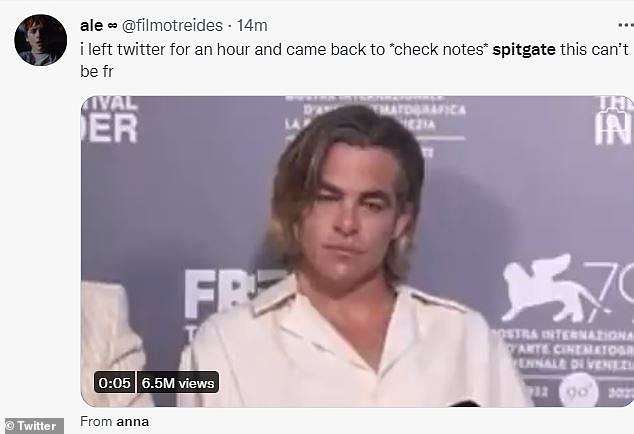 Left: @filmotreides added ‘i left twitter for an hour and came back to *checks notes* spitgate this can’t be fr’