Jason Manford was forced to splurge £300 on a taxi from Rugby to Margate, after the heatwave caused travel chaos across the country. The comedian was left stranded when his train was cancelled – and he begged fans for help.

In view of his 430.6k followers, he wrote: “Tree crashed on to the line near Milton Keynes so trains all stopped! I feel like I’m in the Truman Show today trying to get to Margate.

“Haha and now the ‘tree is on fire’! Couldn’t make it up! #EndOfDays”.

As one fan told Jason they had thought he had his own driver, he replied: “I do but I only really drive if there’s no decent train there or need to get back late.

“Hardly ever drive to London way as trains are (usually) so good!” 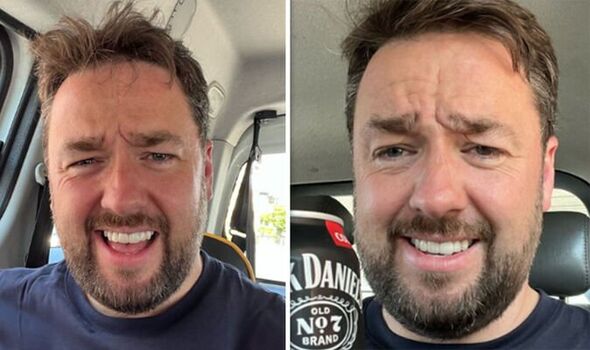 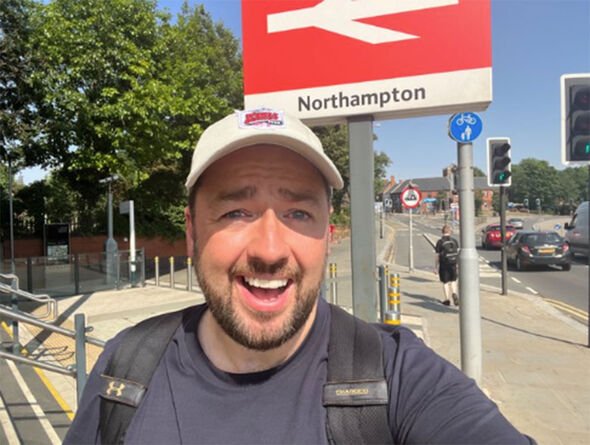 But the day went from bad to worse as Jason revealed his next train had been cancelled.

Posting a screenshot of the bad news, he wrote: “Haha and now this! I’m trying to get trains to save the planet & the planet is kicking my a**!”

Desperate not to miss his performance, Jason asked his fans for help.

“Train cancelled in rugby! Anyone nearby wanna lend me their car so I can get to Margate (not even joking, can’t get a hire car or a cab!)” he begged. 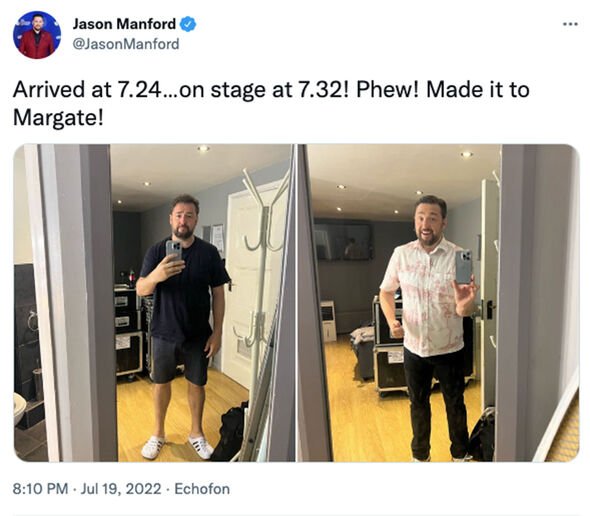 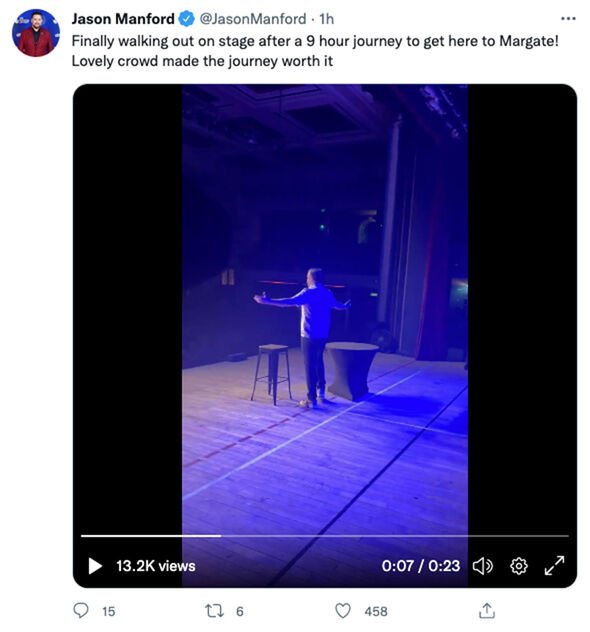 One follower named Richard came back to him with a serious offer to help, even claiming he was outside the station.

But Jason told him: “Sorry pal, I bailed and got a cab! Thanks for the offer, tickets for you for a gig for being a good lad.

Jason then live-tweeted his journey in the boiling hot car for the £90 journey.

“Right, managed to leave chaos of Rugby behind! Tried to share cab to London with 5 others but got bumped off last min cos someone cried!” he shared.

“We can all cry mate! Anyway, in cab to Northampton now. Randomly but it’s as far as this cab driver is willing to go! Inching my way to Margate”.

Thankfully, Jason was able to complete the final leg of his journey in another taxi.

“Okay managed to get a taxi from Northampton to Margate! Only £210! Bargain!” he wrote.

“Had to convince him to put aircon on! He said “it’s a Prius so we can ietger get to Margate or you can have aircon, there’s not enough power to do both!”! P**s funny!”

Later, Jason posted a video of himself finally arriving on stage, having finally managed to reach the venue five minutes before he was due to perform.

Exhausted by his nightmare of a day, the star collapsed and lay down on the stage as soon as he walked on.

“Had to convince him to put aircon on! He said “it’s a Prius so we can ietger get to Margate or you can have aircon, there’s not enough power to do both!”! P**s funny!”