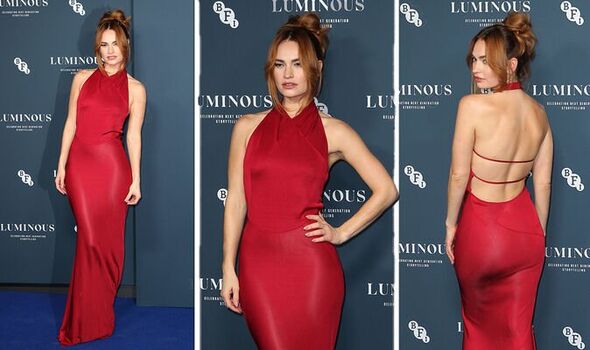 If the blood-red colour of her dress wasn’t enough, actress Lily James gave cameras a 360-degree view of her in it as she posed outside the BFI London Film Festival Luminous Gala. The event, which took place on Thursday, September 29 in London’s Leicester Square was also attended by the likes of Eddie Redmayne and Laura Carmichael.

The English actress, who is best known for her roles in Mamma Mia 2: Here We Go Again, Downton Abbey and Disney’s live-action Cinderella, stole the show at the BFI London Film Festival event as she wore a sultry red floor-length gown.

Pictured on the red carpet both alone and with some of her actor friends, Lily gave a 360 spin as she showed off the back of her dress.

In one photo the stunning actress cheekily grabbed her behind with both hands and smiled at the cameras, her hair tied up in a messy styled bun, with two pieces of hair falling on her face at the front.

With an open back, the star had no choice but to go braless in the femme fatale red dress, two thin straps going across her lower back for support.

From the front, the dress flattered Lily’s figure from head-to-toe, going all the way up to the star’s neck and finishing in a halter style. The eye-catching colour of the frock stood out from others she posed next to, making Lily stand out from the crowds. 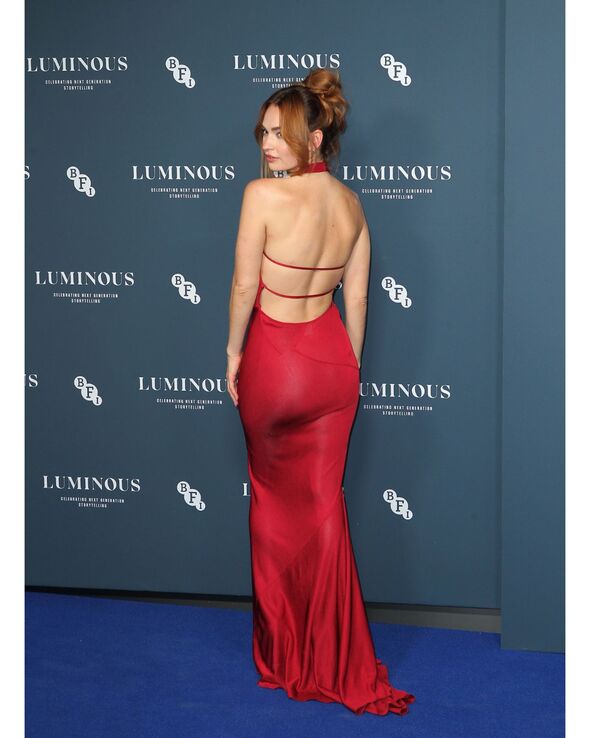 Lily showed off her pert behind as she posed for cameras

Turning her back to the cameras Lily showed off her immaculate figure and her toned bottom as the red dress clung to her behind in the best way. With barely anything on her back, apart from two thin straps holding the dress together, it became clear it would have been impossible for the actress to wear much underwear. 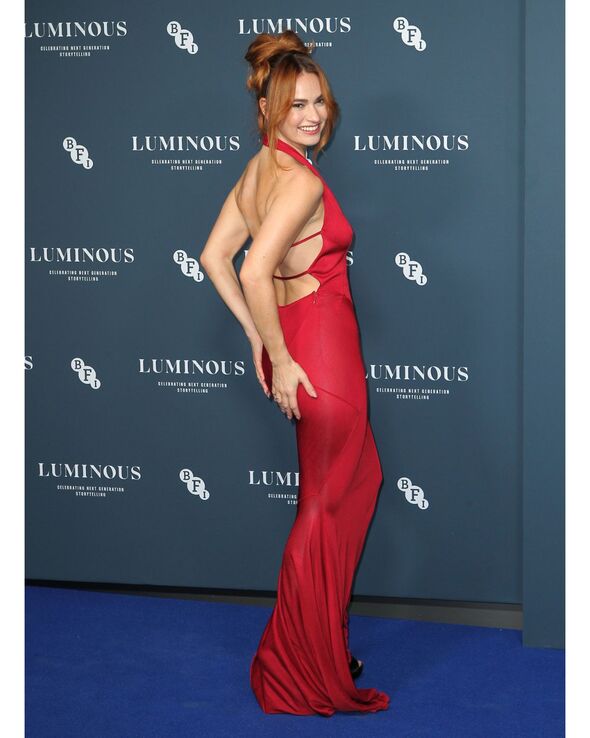 Grabbing her behind in playful pic

Beaming at the cameras Lily put two hands on her bottom as she made her way to face them again. The long red dress clung to her leg as she spun on the red carpet. 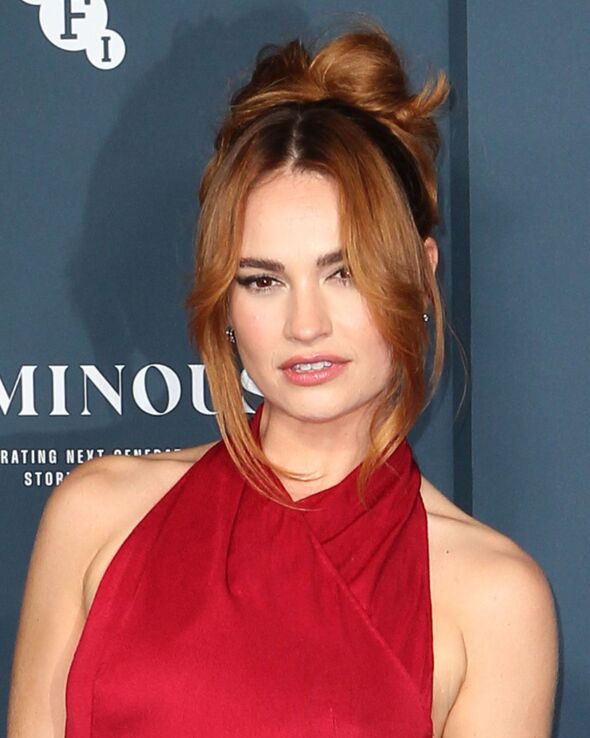 The star’s hair was pulled back in a messy bun

Matching the sleek look, Lily’s hair was tied up on top of her head in a sort of messy yet chic style bun. Two pieces of hair at the front of her head had been kept back from being put inside the bun and instead fell at the sides of the star’s face. A dark brow and black eyeliner completed the look. 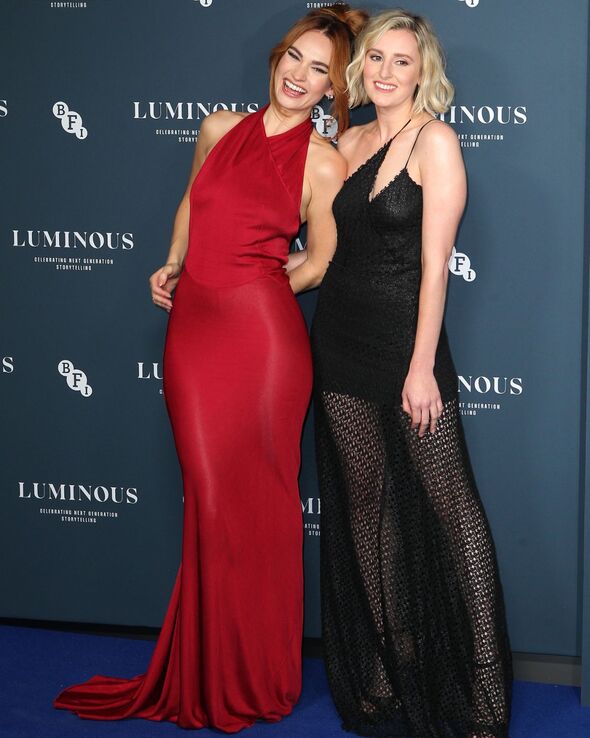 Lily chuckled as she reunited with old co-stars

Reunited with her former Downton Abbey co-star Laura Carmichael, 36, Lily was captured letting out an almighty laugh and beaming as she did. With their arms intertwined Lily lent back and Laura posed in a stunning black lacey floor-length dress, which was partially see-through from the thigh down to the floor. 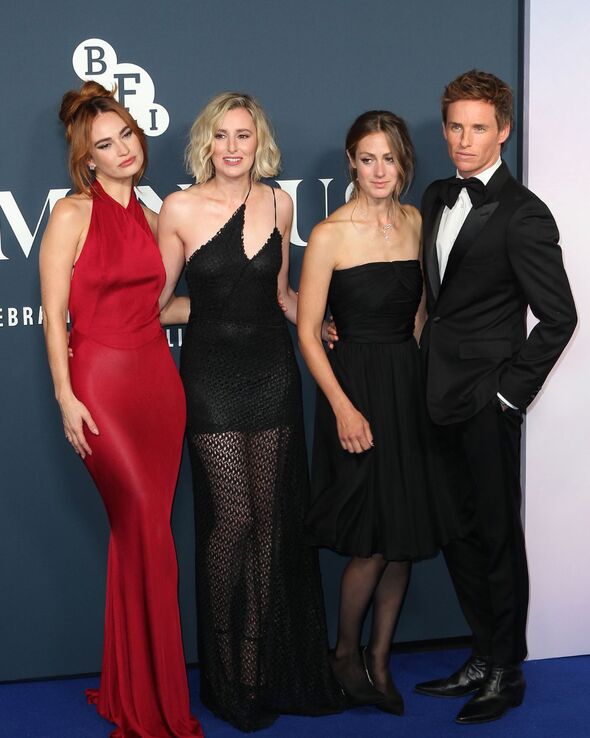 Lily jests on the carpet as Eddie Redmayne joins the party

Seen pulling a fake sad face, Lily and Laura are joined by Fantastic Beasts actor Eddie Redmayne, 40, and his wife Hannah Bagshawe, 39, who have been married since 2014. The trio looked serious as Lily jested with photographers. 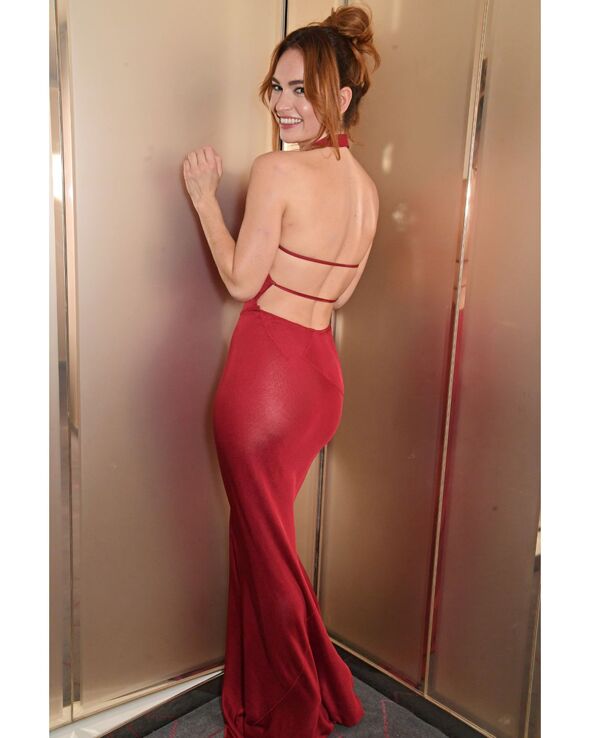 Inside the reception Lily cheekily poses up against wall

When inside the event Lily was papped once again, this time playfully posing up against a wall. Again with her behind facing the camera, Lily shot a devilling smile over her shoulder, her figure one to be envious of.