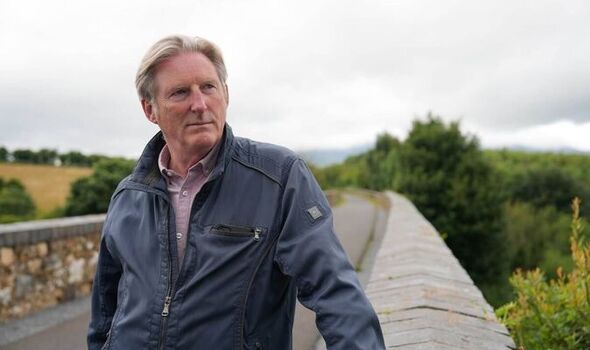 As one critic suggested, it’s hard to shake the feeling you’re “on a motoring holiday with Ted Hastings”, but the 64-year-old actor makes for engaging company, waxing lyrical about people and places from his past, revisiting old haunts and hooking up with long-lost friends on a trip down memory lane.

As well as sharing his passion for food and exploring the oyster fields of Carlingford, he returns to his former local pub to share a Guinness with his pals…and you have never seen a man more content.

Born in Enniskillen, County Fermanagh, Dunbar left Ireland aged 20 for drama school in London. Last year he appeared in a two-part series – stunningly low-key, gentle television at its best – that saw him exploring his personal connection with the Emerald Isle.

Such was the response among critics and viewers, he’s back in this sequel.

Also a two-parter – starting tomorrow on C5 – it sees him rediscover the ancient cliffs and spectacular views he recalls from time spent there as a young boy and adult.

Frankly, it’s a world away from the violence, deception and criminality of the fictional anti-corruption unit AC-12 in Line Of Duty, filmed in Belfast, for which Dunbar is best-known.

“Wind and rain are common in the west of Ireland but whatever the weather, I never tire of looking out at this endless expanse of ocean. I’ve been coming here for years and years, and brought my family here when they were small kids.”

Enter tour guide Cormac McGinley, an expert in zoology and marine biology, who set up his own coastal walking tours company, Cormac’s Coast four years ago.

He explains: “These cliffs were forced up about 400 million years ago. You had a tectonic impact where two plates came together. At the time, the Atlantic didn’t exist.

“We were connected to America and this was part of the Appalachian mountain chain, the layers of the Earth were pushed up but it actually ran into Scotland and then we were parted from each other.

“There’s also DNA evidence to suggest there might have been people here 33,000 years ago, which puts them in the Ice Age and, if they were here, they may have been the Sami people, who were seasonal reindeer hunters from Norway.”

Dunbar continues: “It holds many, many happy memories for me… And also some sad ones. A great friend of mine, John Keegan, a wonderful actor, got out of

Belfast in the early 1970s and came all the way to the west coast and took a photograph of himself standing here looking out across the cliffs.

“And then many years later, when he was very ill, a bunch of us got together and we came back because he wanted to replicate that photograph.

“It was a sad trip with John and it reminded us that, while Slieve League is a place of arrival, it’s also a place of departure. It’s an important place for me, and I’m keen to learn more about it.”

Driving into County Fermanagh, Northern Ireland, where he grew up, and towards the tranquillity of Ireland’s ancient east, he ends up in County Wexford.

One of Adrian’s favourite delicacies is lobster and in the first episode, he meets tour guide Cormac’s brother Micheal, who throws lobster pots under Slieve League to catch the crustaceans before dishing them up in bread rolls from his tiny food truck that sits on top of the cliff.

“Micheal is following in the footsteps of many before him as lobster fisheries are one of the most traditional amongst Irish coastal communities,” smiles Dunbar. “I was lucky enough to have a lobster roll for my lunch and it was absolutely delicious.”

After never quite finding the time before, Dunbar finally visits the enchanting gardens of Glenveagh National Castle, in the northwest of County Donegal, with its courtyards and walled gardens.

Situated in Glenveagh National Park, which was gifted many years ago to the Irish state, visitors have included Greta Garbo, who famously said: “I want to be alone.”

“Well, if you want to be alone, this is probably one of the places to do it,” Dunbar quips.

Built as a hunting lodge, Glenveagh’s remote mountain setting was inspired by the Victorian idyll of a romantic magic island retreat. It was the vision of John George Adair, a wealthy Irish land speculator who completed the building in 1867.

“It is quite extraordinary to come into it and you know you’ve arrived somewhere really special,” Dunbar reflects as its head gardener, Sean O’Gaoithin, shows him around its 27 acres.

“I have a keen interest in gardens myself and I like to spend as much time as I can in my own in London,” says Adrian. “Coming here is something I’ve wanted to do for many years. And when you’re getting a private tour with the head gardener. Well, it’s a real treat.”

Over the years, the estate has passed through different donors and the last was Henry Mcllhenney, who bought Glenveagh in 1937.

While Mr Mcllhenney is responsible for much of what we see today, it was the wife of John Adair, who made the castle available to the British War Office in 1915.

About 60,000 soldiers were sent there to convalesce with injuries from the First World War and, while they were there, they helped build one of the paths Dunbar is seen walking on – aptly named “the Belgian walk”.

Adrian explains: “The path follows the slope through the native woodland and, at over 200 acres, it’s one of the biggest patches of oak woodland in the whole of Ireland.”

The garden even includes a modern wooden temple inspired by one at King Charles’ Highgrove estate in Gloucestershire.

Author of 12 cookbooks, Nevin’s restaurant has placed Blacklion on a culinary map and there’s a long waiting list to get a table.

Adrian tells Nevin: “I’ve heard so much about you. My mother was the first person to mention your cooking and said how great you are.”

Finally making it to his hometown of Fermanagh – a water wonderland, one third of which is covered by rivers – Dunbar takes to the water to share memories and visit Devenish, a 6th century island monastery, only accessible by boat.

No travel series about the Emerald Isle would be complete without a trip to a pub and in Enniskillen, Dunbar enjoys a singsong with three musicians from a family steeped in the Irish tradition.

“Through them, the songs and the tunes will be kept alive for generations to come,” the actor notes happily.

All in all, it’s slow television at its finest.