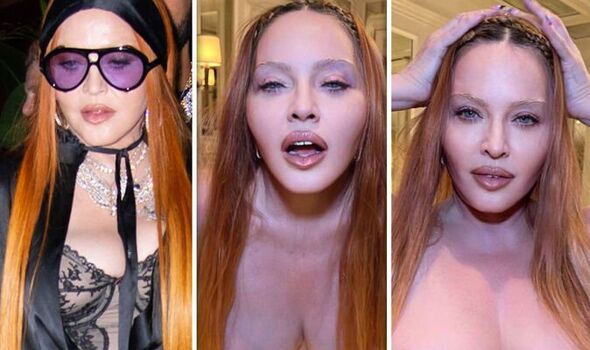 Madonna, 64, puts on eye-popping display as she whips off top to pose for boob-baring pics

Madonna looked half her age in the very racy topless pictures.

Material Girl hitmaker Madonna, 63, isn’t afraid to cause a stir, and her latest Instagram post did just that, as she ditched her top for photos shared with her 18.5 million followers.

The singer showed off her age-defying face and figure by baring all in the racy snaps.

Madonna left little to the imagination, relying on tiny candy and money emojis to protect her modesty, as she bent over towards the camera.

She captioned the boob-baring pics: “Went from candy to money,” as the Grammy winner teamed her topless display with gold high waisted shorts and black fishnet tights.

Madonna’s fans believe she is amping up her sexy Instagram content to promote the 30th anniversary of her fifth studio album, Erotica, which was originally released back on October 20, 1992.

Around the same time, the provocative star released her first book Sex, which she claims paved the way for stars like Kim Kardashian, 42, and Cardi B, 30.

Madonna ran her hands through her new dyed locks in the revealing photos.

Madonna flashed her boobs to the camera while pouting cheekily

Madonna appeared to be posing in her dressing room.

Madonna wore her signature fishnet tights for the snap while flaunting her enviable cleavage.

Madonna recently switched up her pink bob with red extensions

Madonna stepped away from her blonde locks this year, opting for several bright hair colour instead.

Madonna has always been known for her daring fashion statements and revealing outfits.