Spot the true Prue Leith! Bake Off star, 82, gives doppelganger, 69, playing her on stage her earrings

Prue Leith has been united with the actress who played her in a musical version of Bake Off.

Prue was so delighted by the encounter that she immediately took off her earrings and gave them to her doppelgänger as a spontaneous gift.

The 82-year-old chef met Rosie Ashe, 69, at Cheltenham’s Everyman Theatre earlier this month during the final production of Bake Off the Musical and this picture shows them together for the first time. 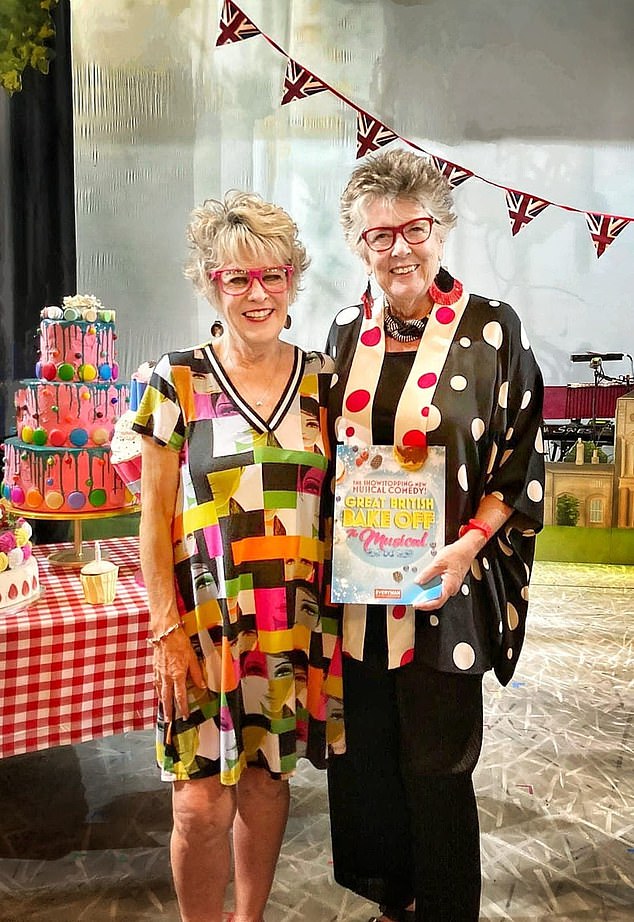 Prue Leith, 82, was so delighted by the encounter that she immediately took off her earrings and gave them to her doppelgänger Rosemary Ashe, 69, as a spontaneous gift

Prue was gushing with compliments for the Olivier Award nominated actor but was particularly flattered by Rosie’s slender frame. ‘She told me she was thrilled I was slim and that I could sing and dance like a dream,’ Rosie said.

Prue also complimented Rosie’s voice but noted their differences, admitting that she thinks her voice makes her sound as though she’s bored.

‘She said I caught the essence of her including her speaking choice which she said was more interesting than hers as she thinks she tends to sound as though she’s bored because of timbre. Which she never is of course. What a fabulous vibrant woman,’ Rosie enthused.

‘I asked her if I could have her earrings as a joke, then as she left, she slipped them into my hand,’ she added.

The innuendo-filled musical is based on a fictional ‘unaired series’ of Bake Off – where the audience follows the contestants and judges but unlike in the TV show, they get to know them off-camera as well.

The cast are hoping the show will one day make it to the West End.