Tom Brady shows off his muscular physique as he works up a sweat on a bike and boxes with his kids during family yacht day with Gisele Bündchen in Portofino, Italy

He is one of the world’s most recognisable sportsmen thanks to his twenty year NFL career.

And even on a family vacation, seven-time Super Bowl champion Tom Brady, 44, couldn’t resist working up a sweat.

Tom was spotted exercising on a bike and donning boxing gloves for a sparing session with his son as he and his wife Gisele Bündchen set sail on a luxurious yacht during their Portofino getaway.

Forever the sportsman! He is one of the world’s most recognisable sportsmen thanks to his twenty year NFL career. And even on a family vacation, seven-time Super Bowl champion Tom Brady, 44, couldn’t resist working up a sweat

Tom showed off his muscular physique in swim shorts as he embarked on his workouts on deck.

He was spotted cycling on an exercise bike with a male friend before laughing through an animated boxing session with kids.

Tom and Gisele’s children Benjamin, 12, Vivian Lake, nine, and the sportsman’s eldest son John Edward, 14 were on board alongside other family members who have joined the trip. 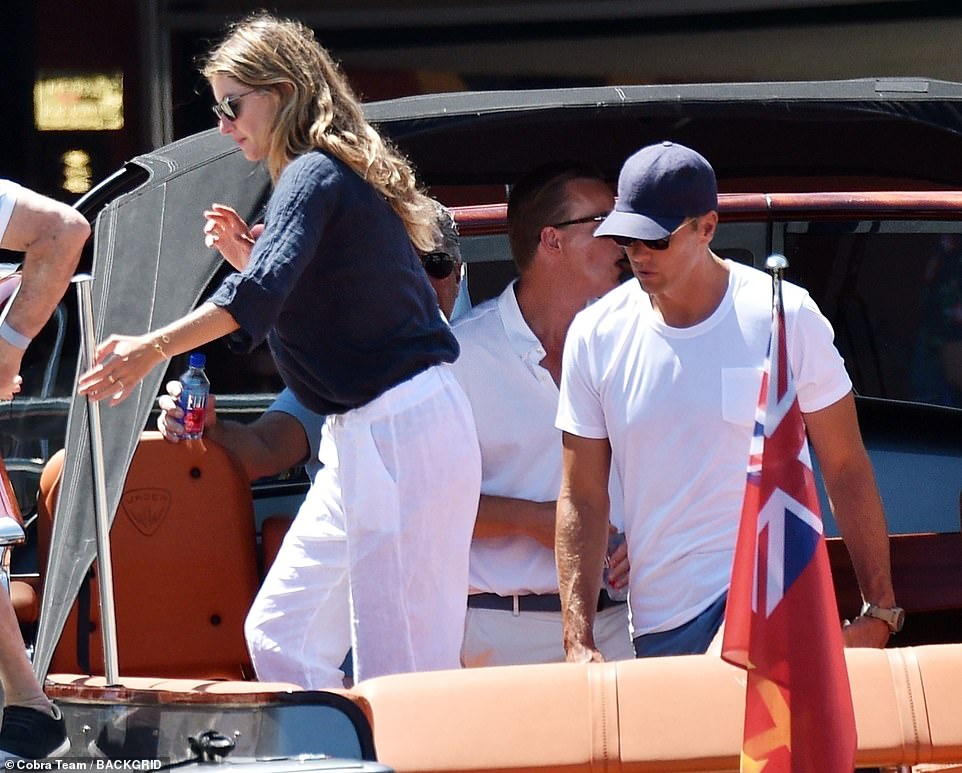 In great shape: Tom showed off his muscular physique in swim shorts as he embarked on his workouts on deck 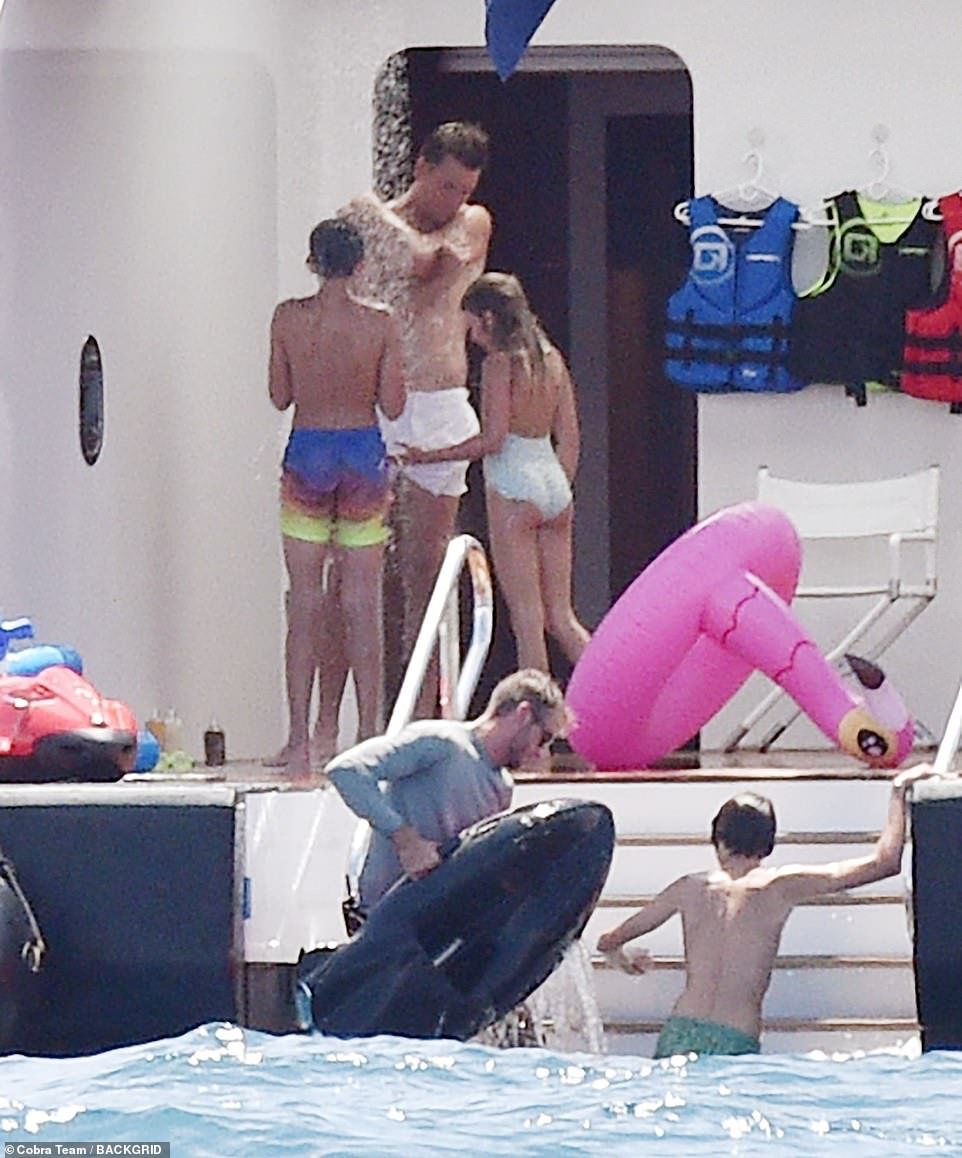 Dad life: Tom and Gisele have whisked their children Benjamin, 12, Vivian Lake, nine, and the sportsman’s eldest son John Edward, 14 to Italy for a summer break

The family have jetted to Italy for a summer break ahead of Tom’s debut return to the Buccaneers for the 2022 NFL season in September.

Their trip comes after Gisele revealed why raising children Tom is not the ‘fairy tale’ most people imagine it would be.

During a candid interview with British Vogue, the supermodel explained that it takes ‘work to be really in sync with someone, especially after you have kids.’ 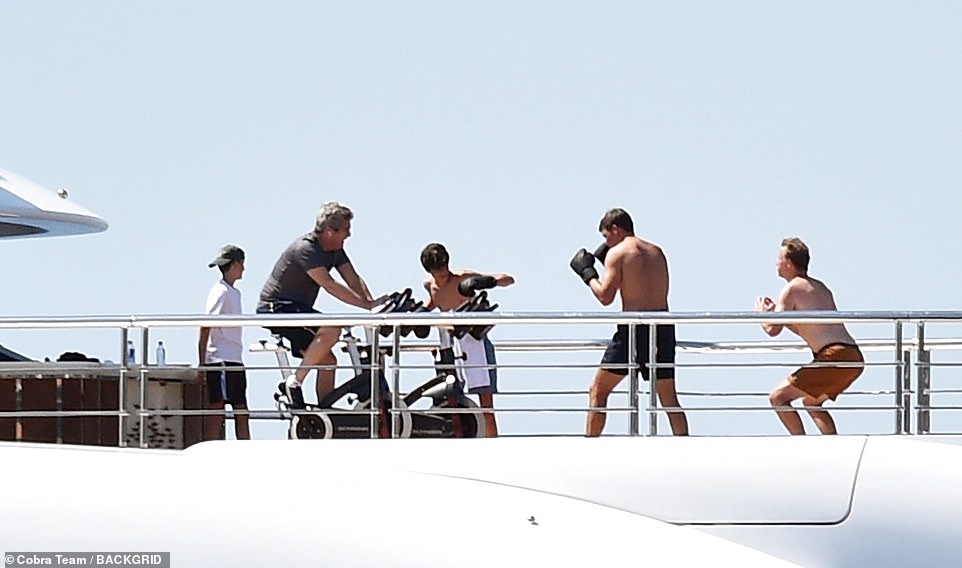 All hands on deck: It was a team workout session as Tom got ready to spar with boxing gloves on, while a family member worked up a sweat on an exercise bike 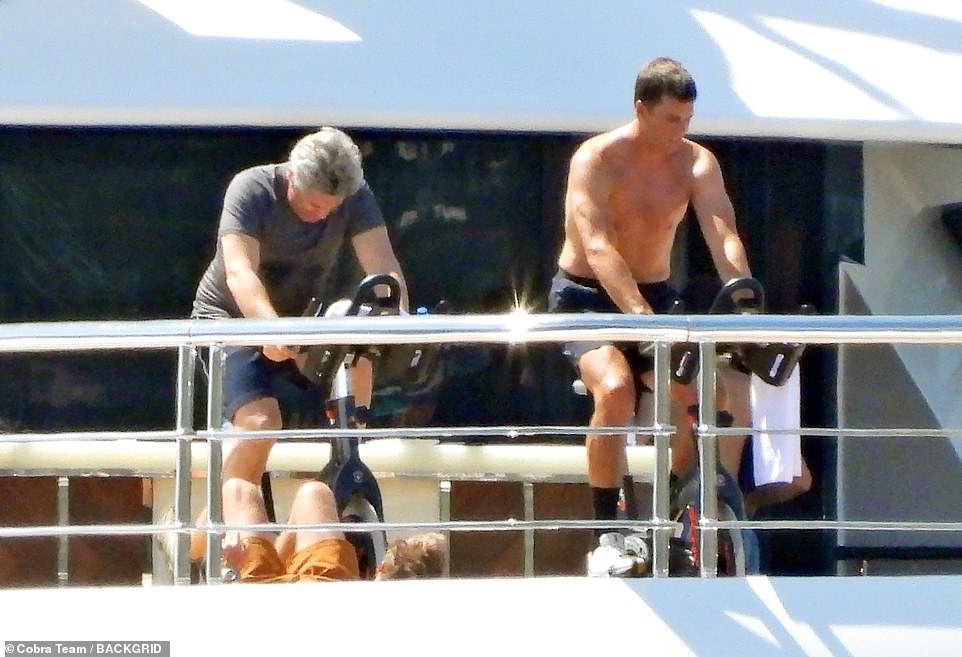 Work it: Tom got his own time on the spinning bike in, cycling under the beating sun as he gave the exercise his all on the deck

‘His focus is on his career, mine is mostly on the kids,’ she explained. ‘And I’m very grateful that he lets me take the reins when it comes to our family. He trusts my decisions.’

The Brazilian beauty went on to explain how successful relationships ‘don’t just happen’ and recalled times when they didn’t always see eye to eye.

‘I remember, in the beginning, he wasn’t into the idea of home birth,’ she told the magazine. ‘He was like, ‘You’re not going to do that, because you’re going to die.’ 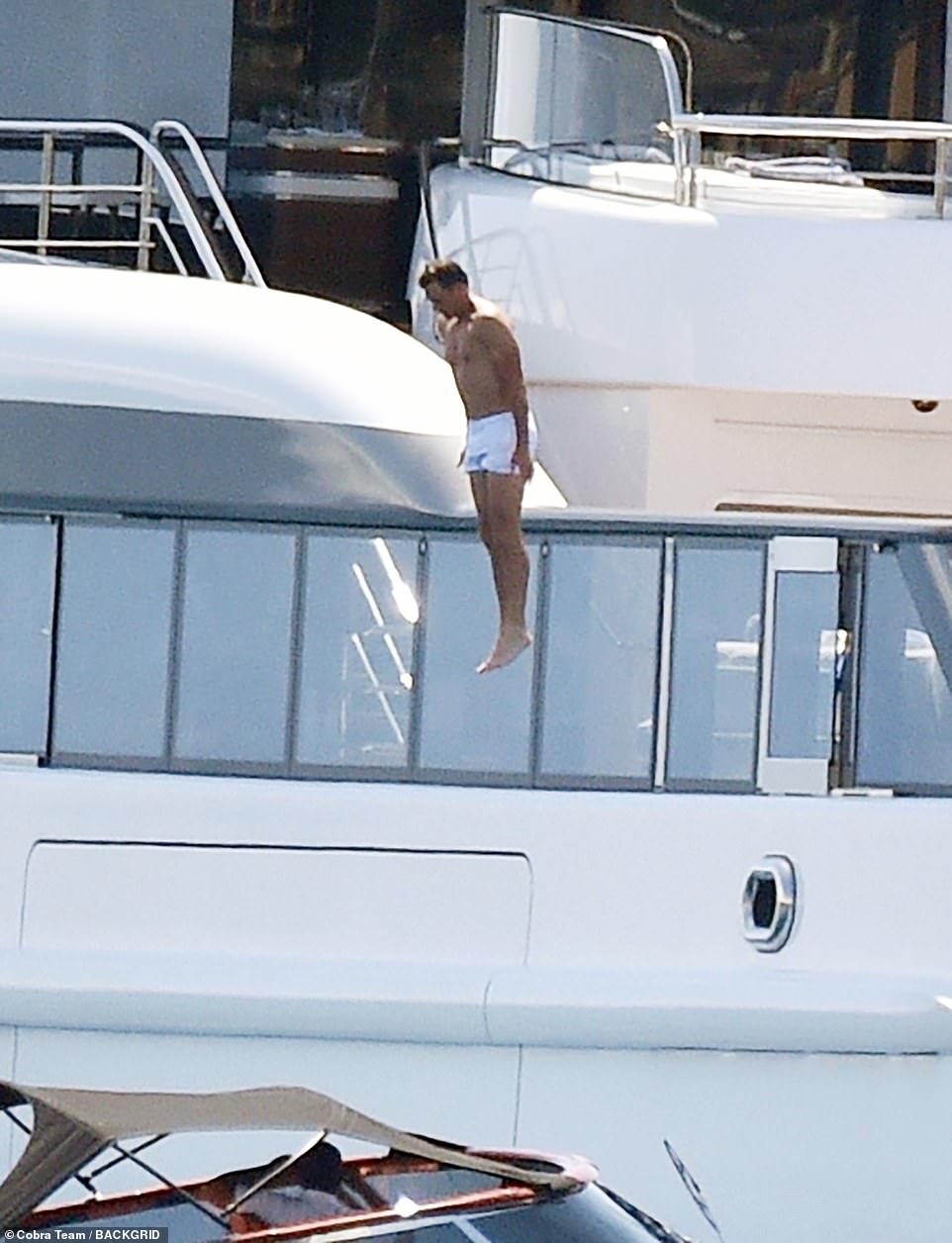 Cooling off: After a sweaty workout, it was time for Tom to cool off, as he was snapped jumping off the lavish yacht and into the ocean 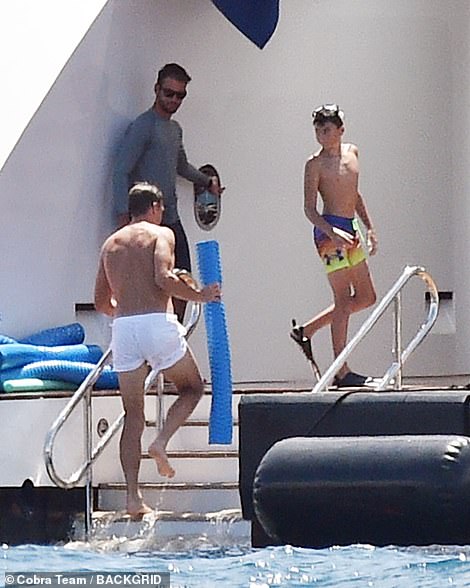 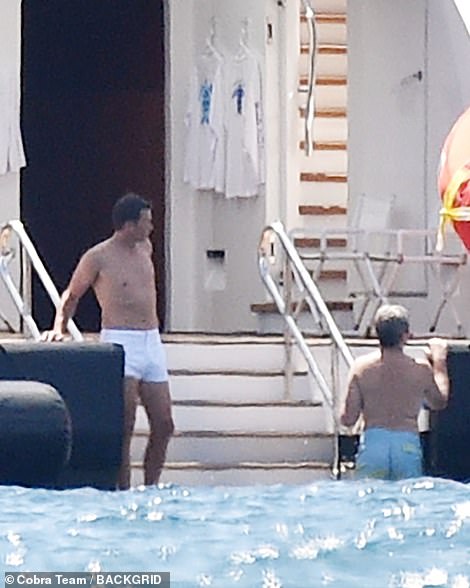 Water fun: The group had a collection of blow-up water toys which they took off and on the yacht, with stairs leading to the clear blue water 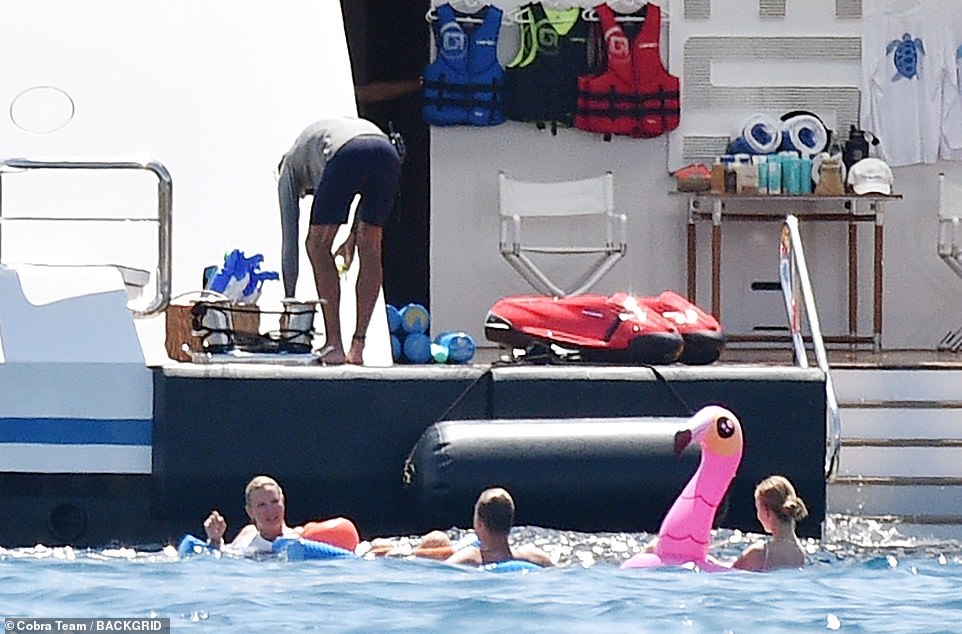 Joining in: Everyone joined in as they took blow up rings into the water, including a pink rubber flamingo

Eventually after showing him multiple videos on home birthing, she says he got on board.

‘I made it clear that this is my body and I’m going to decide how I give birth,’ the mother-of-two stated.

She and the legendary quarterback, who married in 2009, share Vivian Lake and Benjamin, while Tom also has a 14-year-old son named John Edward with ex Bridget Moynahan.

In her new memoir, Lessons: My Path To A Meaningful Life, the author detailed how parenting has hurt her marriage as he trains up to 12 hours a day.

‘When someone you love is happy, it makes you happy, or if they’re sad it makes you sad. You suffer with them and you have joy with them,’ she wrote in her book. 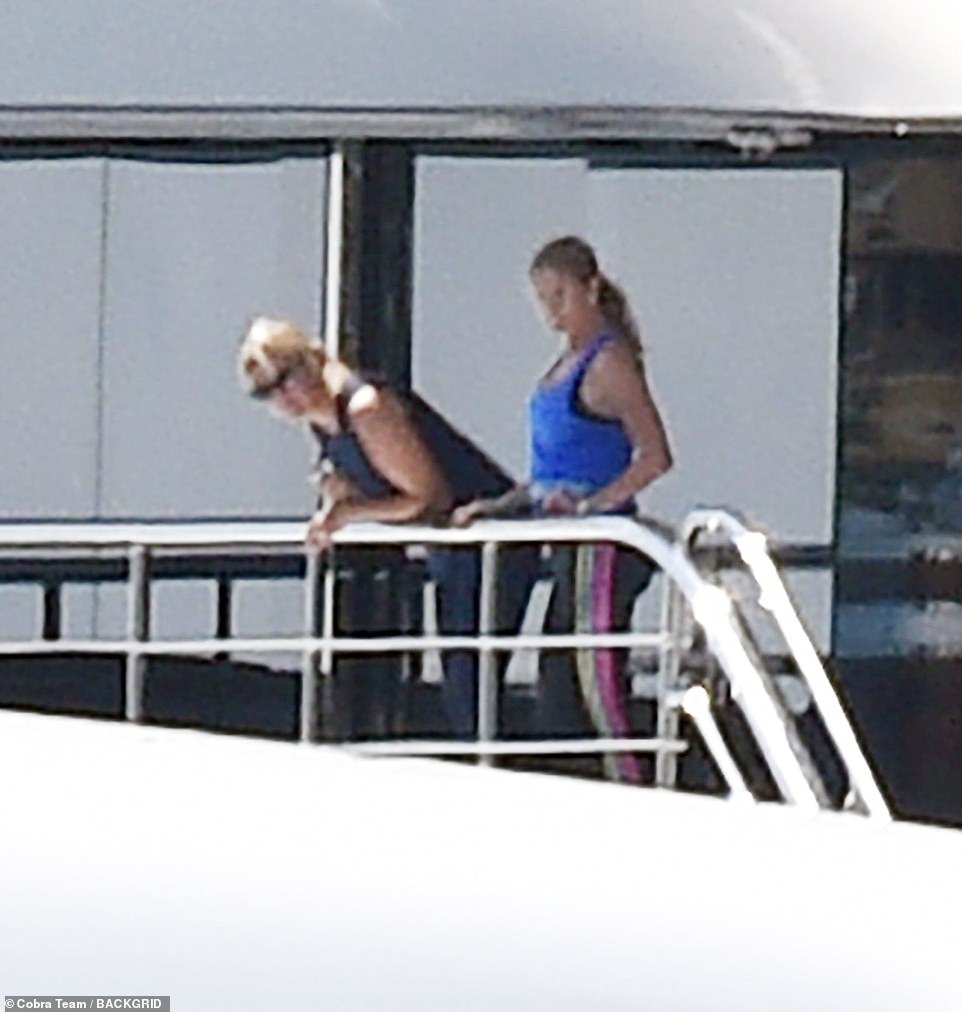 Watching on: Family members watched them swim from the balcony of the boat, peering down below 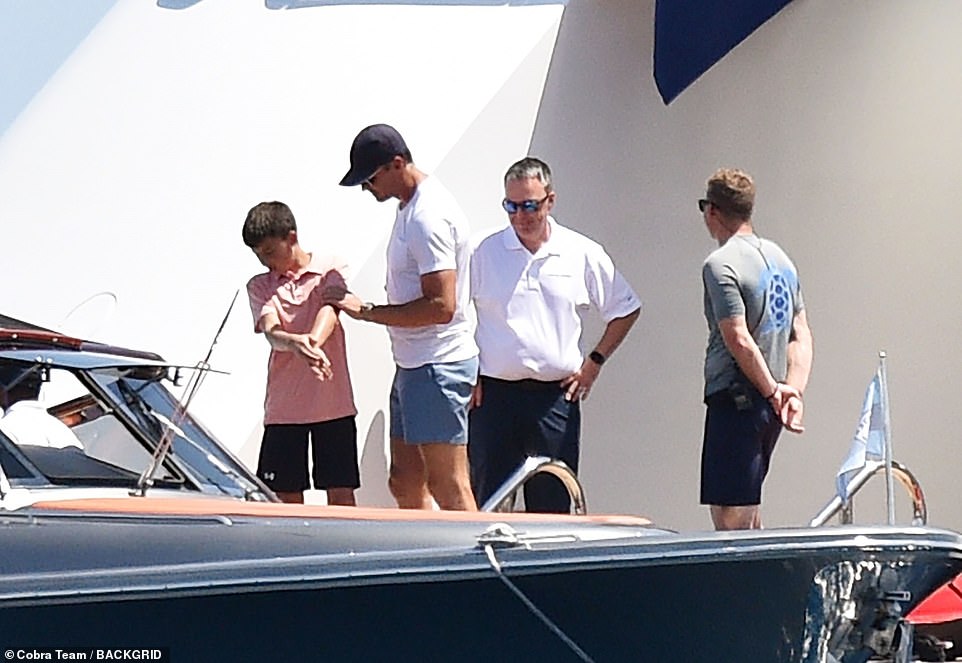 Bonding: The boys enjoyed some bonding time as they checked out a speedboat earlier in the day

But she seems to have a smart way of dealing with marital conflict.

After he sent her an angry note, she told him: ‘I was ready to speak whenever he was ready to resume the conversation in a loving and respectful way.’

The catwalk vet added, ‘I felt like maybe it was time to share some of my vulnerabilities, and it made me realize, everything I’ve lived through, I would never change, because I think I am who I am because of those experiences.’

Tom previously revealed Gisele’s feelings towards his lingering football career during a 2017 interview with SiriusXM, following his fifth Super Bowl win with his former team the New England Patriots.

‘If it was up to my wife, she would have me retire today,’ he admitted at the time. ‘She told me that last night three times. And I said, “Too bad, babe, I’m having too much fun right now.”‘ 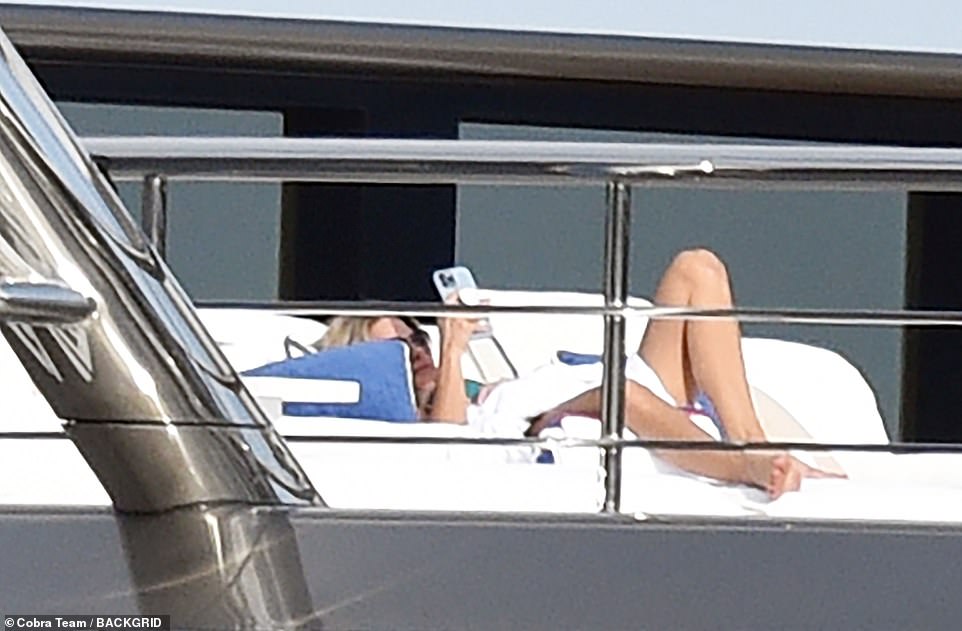 Time out: Gisele lazed back on the boat while Tom was enjoying an active day 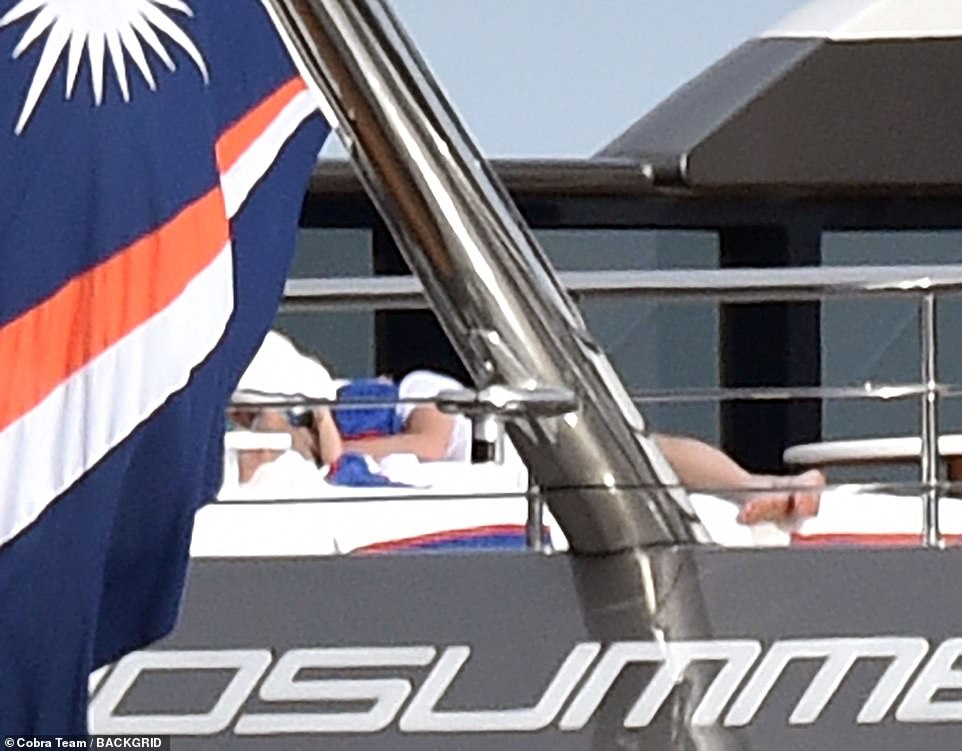 Siesta: It was time for a snooze under the sun, as the model rolled onto her side while laying down 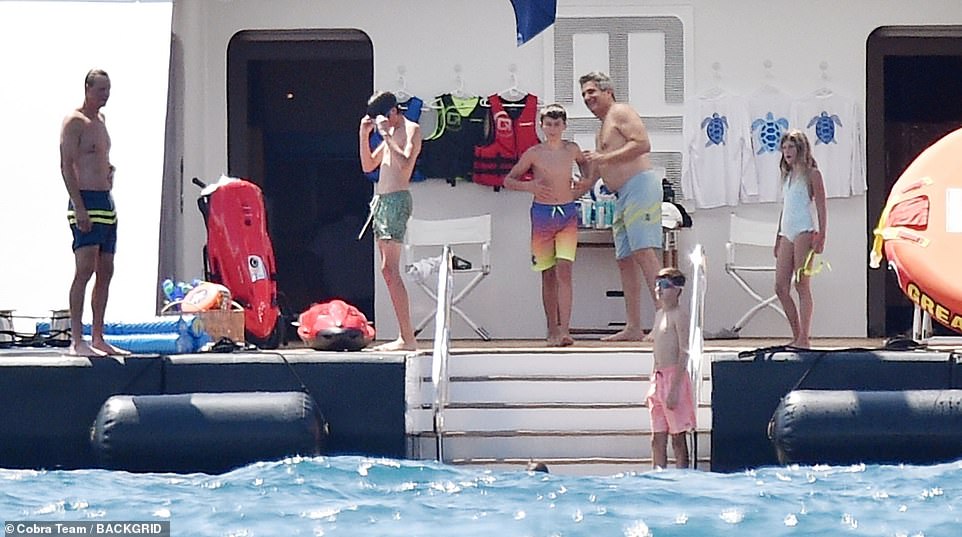 The family appeared in high spirits, donning goggles as they prepared to deep dive

Tom was famously selected by the New England Patriots during the NFL draft in 2000. He stayed with the team until March of 2020 when he signed with the Tampa Bay Buccaneers.

He announced his retirement from the NFL earlier this year but, in a shock move, reversed his decision six weeks later and announced he would be returning to the Buccaneers.

Tom, Gisele, and their children left their home in Boston, Massachusetts behind and relocated to Florida, in order for the football stat to be closer to his new home base.

Continuing to share some insight into his banter-filled marriage with Gisele, Tom told James Corden that he has been ‘getting reacquainted with the dishwasher, where the broom is, and where the vacuum is’ since football season came to an end last month.

Tom explained that Gisele is not afraid to hand over a list of chores for him to handle, after having spent six months in football mode.

‘There is definitely [a to-do list] where Gisele says, “Okay! Your turn. You got breakfast this morning. You got these different things that I’ve been doing for the last six months, while you have been playing football.”

‘But [Gisele] has been the best supporter. She’s been amazing. I think, for me, [being at home] is just a whole different life,’ he made clear.

Drying off: Following his dip in the water, Tom dried off on the deck with a white towel 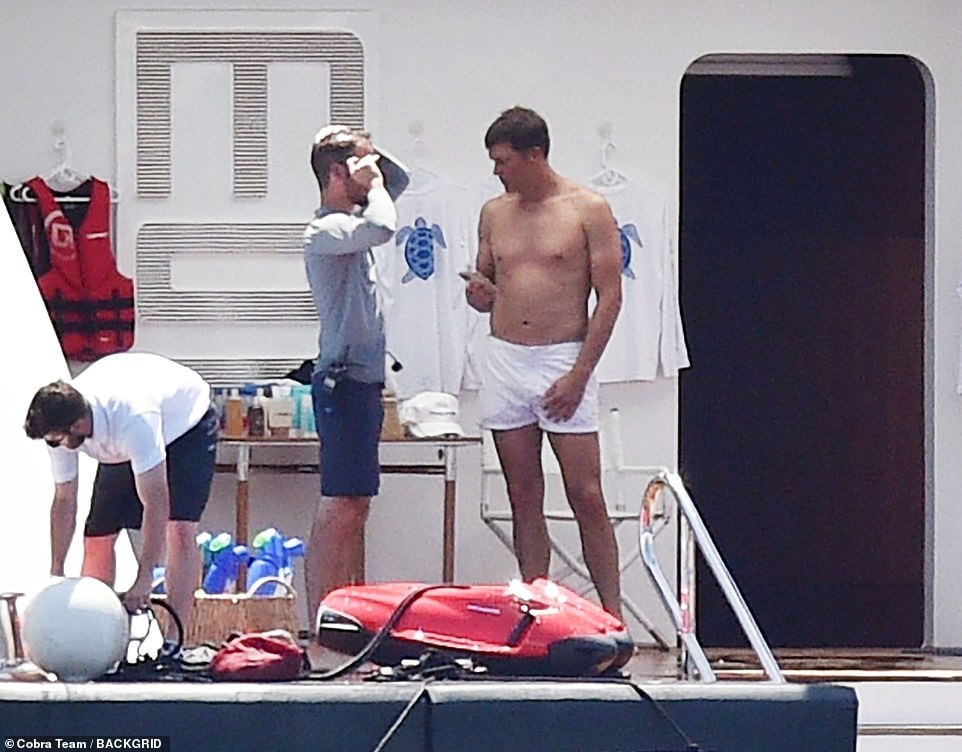 Kitted out: A selection of T-shirts and life jackets sat along the deck of the boat, as Tom chatted away 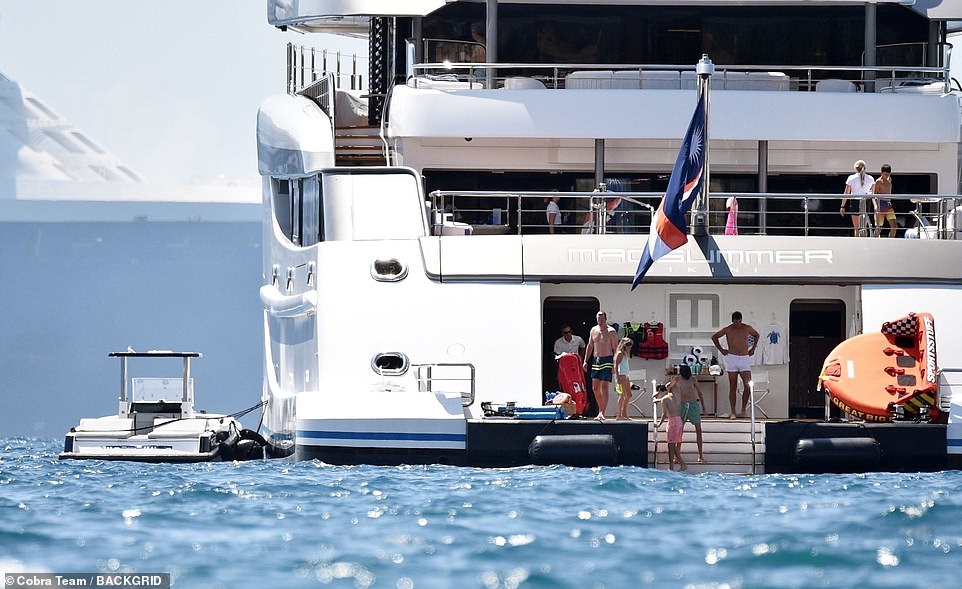 Wow! The luxury super yacht is spread across multiple floors, with a speedboat attached