13 Reasons Why star Katherine Langford: ‘I’m drawn to stories that have something to say’ 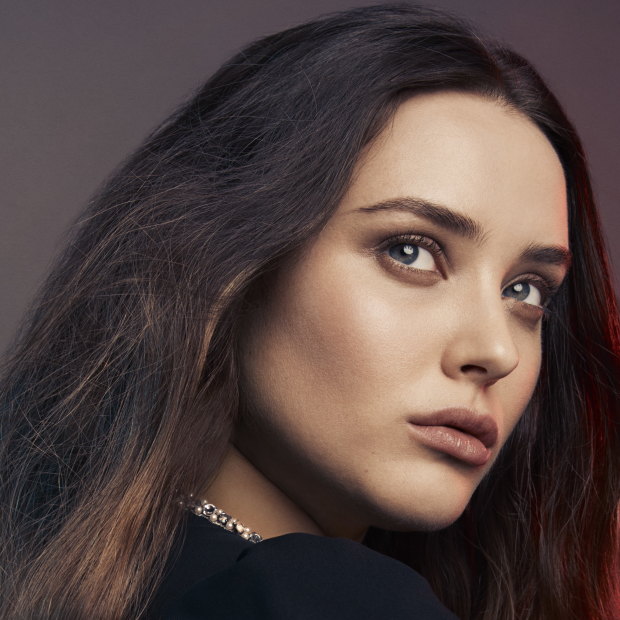 Growing up close to the water in Perth, Katherine Langford would rise at 4am to go swimming. For almost 10 years, she competed in national competitions.

“I love the ocean,” says the nomadic actor, who shot to fame as lead character Hannah Baker in the controversial Netflix series 13 Reasons Why. “Even here in Los Angeles, I love to be close to the ocean.”

The early morning swim training – and the work ethic of her doctor parents – prepared her for 4am call times on set when she arrived in the US five years ago.

As a teenager, Katherine also composed her own songs on piano and posted them to YouTube. “Like acting, music is a true love,” she tells Sunday Life via video conference. “They’re sister passions for me.”

The 26-year-old is still making music, even while her acting career blossoms. Earlier this year, Katherine returned to Australia to film Savage River, a new ABC series shot on location around Bright and Myrtleford in Victoria, under the direction of Jocelyn Moorhouse and with veteran cinematographer Don McAlpine.

The series draws out the underbelly of the gorgeous landscape while threading the thriller with themes of ecological crisis and toxic masculinity. Men hold the positions of power in this town, with all the harm that entails for the natural world and everyone else.

But the series is also about not being defined by past mistakes, says Katherine, who plays Miki Anderson, returning to her home town to live with her brother and four-year-old niece after serving eight years in jail for the murder of her best friend, Jasmine.

“Miki definitely has a spiky exterior,” says Katherine, whose character is employed in the town’s abattoir, a workplace dripping with misogyny and implied violence.

“You really have to earn her trust, but once you get it, she’s a very loyal person. She’s not perfect, and not always likeable, but once you understand what’s at her core, I think what I like is her honesty.” 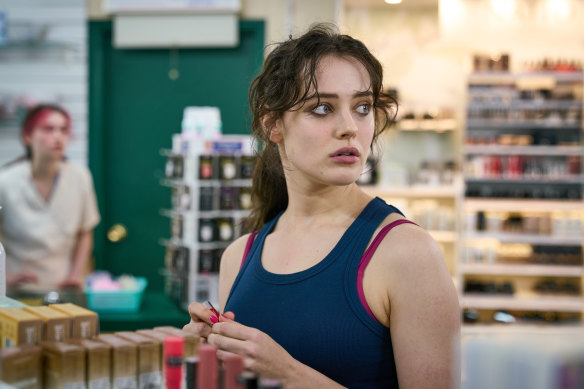 Katherine plays Miki Anderson in the upcoming ABC series Savage Garden: “She’s not perfect, and not always likeable, but once you understand what’s at her core, I think what I like is her honesty.”Credit:ABC

The set up is reminiscent of Moorhouse’s 2015 film The Dressmaker, in which Kate Winslet returns to her rural home town to face scorn and suspicion – but this time the switch is flicked to darkness, rather than whimsy.

“Jocelyn has such a unique lens through which she approaches cinema,” says Katherine. “I’ve been a fan of hers with The Dressmaker but also Proof, with Russell Crowe. And I’m drawn to stories that have something to say and aren’t afraid of telling the truth.”

With key roles in the films Love, Simon (2018), Knives Out (2019) and Spontaneous (2020), Katherine has a thriving international career, which all began with a career gamble.

Having majored in music theatre at Perth’s Principal Academy of Dance
& Theatre Arts, she was offered a coveted spot in 2016, at age 19, in the bachelor of arts program in acting at the Western Australian Academy of the Performing Arts [WAAPA] – and turned it down.

“It was the hardest decision of my life,” she recalls. “I love to learn and this is a craft at the end of the day, and there are a lot of talented people. I auditioned for three years to try and get into WAAPA – it’s such a prestigious place to train – but at the same time, I had some managers in the US who asked me to audition there for two [pilot] projects.

“To pursue that meant giving up my dream, which was getting into WAAPA,” she says.

Having auditioned, producers at both projects told Katherine she was “too green” for either role. “So, I came home to Perth, not at drama school, with no acting job.” She returned to her standby job working in a bar. “I had to ask, ‘Please can I have my job back?’ ”

Katherine then auditioned remotely for 13 Reasons Why. Two weeks later, she was asked to audition again, and then to speak to its Oscar-winning director Tom McCarthy. She won the role of Hannah, a teenager who has died by suicide but whose story is told in flashbacks. “To get that breakout, to have one person believe in you, can be the toughest thing to achieve,” she says.

“I’ve always had a strong draw to social awareness and talking about issues, and mental health is something I’ve been an advocate for, for quite a few years now,”

The suicide theme of the hit series was controversial, although Katherine has previously pointed out that it sparked important viewer conversations about the topic. Coincidentally, a few years earlier, in 2013, Katherine had composed and performed a song called Young and Stupid, which was motivated by Perth teenager suicides.

“I’ve always had a strong draw to social awareness and talking about issues, and mental health is something I’ve been an advocate for, for quite a few years now,” she says. “It’s something I feel is really important to talk about and that I want to keep advocating for.”

Having won the role, Katherine had just 10 days to get a US visa – a process which, even expedited, can take six to eight weeks. Fortunately, the producers and showrunners of the projects she failed to win roles for wrote reference letters to help her application along.

If she hadn’t got the visa on time, might the 13 Reasons Why role have slipped through her fingers? “I try not to think about it!” she laughs. 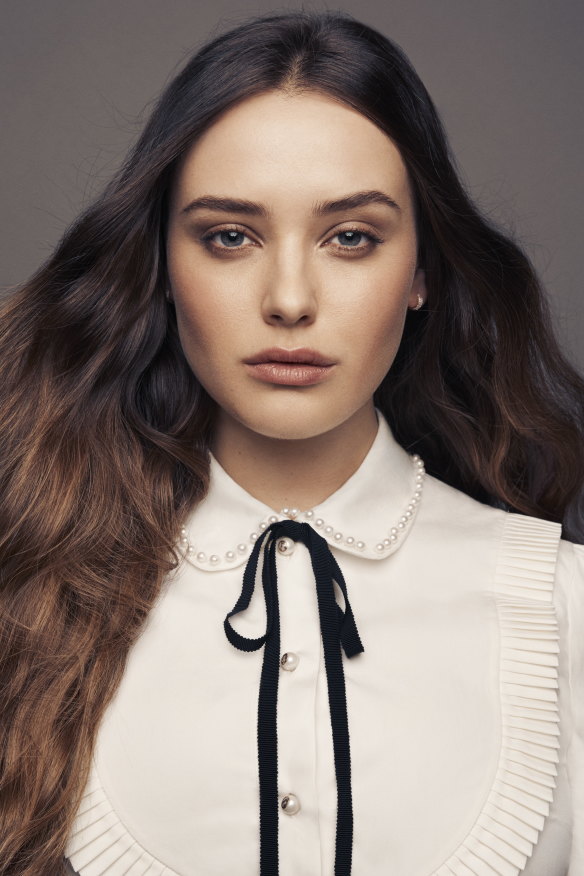 Katherine is “nomadic by nature, living out of a suitcase like a lot of actors.”Credit:Matt Holyoak/Camera Press/Australscope

As a teenager, Katherine was interested in both medicine and politics. Her parents’ work ethic – her mum, Elizabeth, is a paediatrician and father, Stephen, is a doctor who became medical director of the Royal Flying Doctor Service in WA – has been an important yardstick in her own career. “What they do is so important, and they worked incredibly hard, and it really inspired a drive in me,” she says.

Katherine’s younger sister, 25-year-old Josephine, is also an actor, best known as the character Tessa Young in the US series of romantic drama films After.

“We’re both very lucky to be able to do what we’re doing,” says Katherine. “I’m incredibly proud of her, and the love goes both ways. It’s just amazing to be able to watch your sister’s success, to see them do what they love. Also, our parents are probably happy that we’ve been able to do what we love. Neither of us ended up being doctors!”

Katherine says she is “nomadic by nature, living out of a suitcase like a lot of actors”, so doesn’t call Los Angeles home. There are rumours she was dating her 13 Reasons Why co-star Dylan Minnette: were they true, or just fans’ wishful thinking? “I’m not even going to answer that,” she laughs, shaking her head.

Acting and music don’t always feel like work, she says, and in her downtime she loves to watch live performance and see her friends unveil their creative work.

She also enjoys reading and travel, having earlier this year spent time with friends in Stockholm. She found herself in the Swedish capital following a trip to France, where she attended events held by L’Oréal Paris. In 2020, the company had announced her role as an “international spokesperson”, declaring her a “millennial icon” for playing strong female leads and speaking up for gender equality.

Katherine was also watching behind the scenes as director Robert Connolly filmed his forthcoming movie Blueback, an ecology fable set in WA that reunites Connolly with star Eric Bana, with whom Connolly made The Dry.

She has her own projects in mind, perhaps in a producer role, but is tight-lipped about this ambition.

Katherine’s performance in Savage River has rekindled her passion for addressing global warming and climate anxiety. The series suggests a different way of approaching the environment, from a female point of view, as locals fight to clean up their polluted river.

“If you listen to some of the scenes, you can hear the birds and you can hear nature and the location you’re in,” says Katherine. “That’s really special, and makes it feel like home. It really cements this Australian story.”

Savage River premieres on ABC TV and on iview on September 4.