Flanked by four women, including his wife Catherine, Premier Daniel Andrews visited the Joan Kirner Women’s and Children’s Hospital on Wednesday to continue his attempts to woo female voters who have turned their back on Labor.

The day after the campaign’s only face-to-face debate, both major parties were making their final pitches to Victorian voters ahead of polling booths closing at 6pm on Saturday. 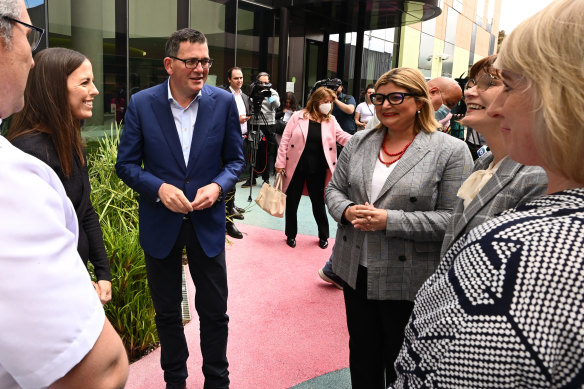 With Labor ahead in the polls on a two-party preferred, and Andrews marginally winning this election’s only debate on Tuesday night, the opposition and government targeted women and the hip pocket – the policy areas they think will make a difference.

Opposition Leader Matthew Guy fine-tuned one of his most popular ideas – vowing to bring forward by six months his plan to cap daily public transport fares at $2.

The premier pledged $19 million to fund a 12-month trial to allow pharmacists to treat minor illnesses such as common skin conditions, as well as straightforward urinary tract infections, which predominantly affect women, and reissue prescriptions for the oral contraceptive pill.

“We know that finding a bulk-billing doctor particularly after hours has perhaps never been harder than it is now, that’s a real challenge,” Andrews said. “We’re going to do something about that, and we’re making the best use of our community pharmacists right across our state.”

The government spent much of last week pitching to women, including announcements around free tampons and pads in public toilets and doubling the number of endometriosis surgeries.

Resolve Strategic director Jim Reed said Labor had lost ground among working-age women since the 2018 election, largely as a result of integrity issues.

“While many of these women had initially parked their vote with the Greens and independents as a protest, they are now increasingly either switching or directing preferences to the Coalition,” Reed said.

“They’re not the only group to desert Labor, but the campaign has obviously gauged that they are more easily targeted and brought back with focused policy appeals and attacks on Guy.”

Catherine Andrews said she had stood by her husband for the past 30 years and described him as “thoughtful, kind, intelligent”.

“His vision for Victoria … supported by his incredible record, I’m excited,” she said.

If re-elected, the Labor government will give $30,000 top-up payments for first-year trainee GPs to ensure they don’t take a significant pay cut to become a GP, and cover the cost of the $10,000 general practitioner exam. Fewer than 14 per cent of future doctors are choosing general practice as their specialty of choice, according to the Royal Australasian College of General Practitioners.

“We want to make sure that more and more of our junior doctors are choosing general practice because we know and understand that is a real priority,” Andrews said. “This is not traditionally the work of state government, but we think this is a practical common-sense reform we make.”

The college welcomed Labor’s commitments to invest in the training pipeline for GPs, but warned against allowing pharmacists to write scripts for the contraceptive pill or treat urinary tract infections.

Australian Medical Association vice-president Danielle McMullen said it was hugely disappointing that the “positive announcement” for incentive payments for trainee GPs had been paired with the news of the pharmacist prescribing trial, which she argued would “completely undermine” quality GP care.

“There is much more complexity to prescribing a medication, than clicking print. For every medication we choose for people, including repeat medications, we use our years of medical training to think through whether it’s still the most appropriate medication,” McMullen said. 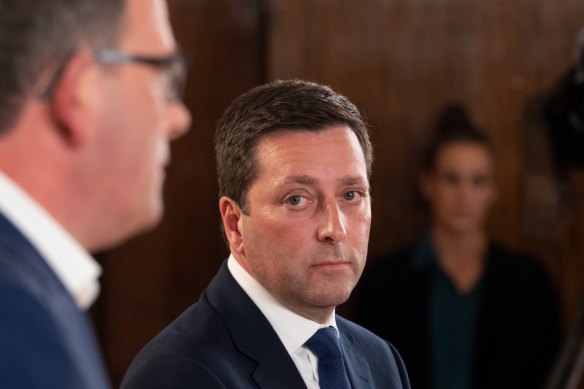 “Sometimes that’s visible to patients, and there’s a lot of questions that need to happen and sometimes it isn’t.”

Pharmacy Guild of Australia Victorian president Anthony Tassone, who was at the press conference with Andrews, said peak medical bodies at times behaved like “they are the league umpire and get to dictate how the game is played”.

“Pharmacists prescribing might be a new thing for Victoria, with regards to antibiotics for urinary tract infections and re-issuing oral contraceptives, but it’s not a new thing by international standards,” Tassone said. “It’s been happening for some years in New Zealand, United Kingdom and parts of Canada.”

While Andrews was out at St Albans focusing squarely on the healthcare system, Guy trekked to Cranbourne to revisit the Coalition’s single most popular announcement of this election campaign: $2 public transport fares.

The Coalition last month announced public transport fares would be capped at $2 per day, and $1 for concession cardholders, to help reduce cost of living pressures. Guy on Wednesday announced he would bring forward the timeline to slash the fares by six months to January 1.

With just three days until election day, the government faced intense scrutiny over one of its signature infrastructure policies, the Suburban Rail Loop, that Guy said he would shelve and redirect the savings into funding healthcare promises.

The government has disputed the independent Parliamentary Budget Office’s analysis of the project, which suggests the first two stages of the SRL would cost $125 billion.

But Andrews has repeatedly refused to say on the record what the second stage would cost, insisting it was a matter for future governments and providing a concrete figure would be impossible. This is despite the business and investment case assessing the first two stages of the project to determine whether the project stacked up.

”I provided you with all the details of the facts of the matter, we just don’t seem to be able to agree and that’s fine,” Andrews said.

Guy said there was still a possibility the Coalition would build the rail loop – after it is audited to determine its value – but probably not in the next term. “I think that’s unlikely in the next term of parliament because I think our financial position won’t allow it,” he said.

Former federal Treasury economist Stephen Anthony described the Suburban Rail Loop as the “worst infrastructure project of all time”. “It is a disgrace,” Anthony told 3AW on Wednesday morning.

Meanwhile, Labor vowed to install airconditioning units in all 42 high-rise public housing towers in Melbourne if it wins office on Saturday, at a cost of $141 million. The towers stretch across swaths of Melbourne’s inner suburbs, including in Brunswick, Flemington, Prahran, Footscray, Richmond and Carlton.

There have been repeated calls to install airconditioning in the towers, which can reach sweltering temperatures in the hotter months.