From Kings Cross to Broadway: Sydney’s little theatre that could

At a time when many live venues in the city are suffering from COVID-fearful audiences on top of rising rents and gentrification, one little theatre in the heart of Sydney is gloriously bucking expectations.

After six years at the Kings Cross Hotel, independent theatre KXT is moving to a standalone home in a 19th-century former bank building on Broadway in Ultimo. 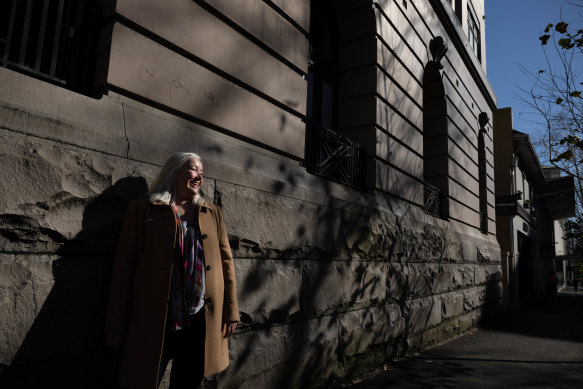 You can take that to the bank: Suzanne Millar outside the theatre’s new high-profile premises.Credit:Janie Barrett

This bright spot on the city’s theatre landscape comes as the Griffin Theatre this week revealed a $5 million gift from billionaire philanthropist Kerr Neilson and his daughters Paris and Beau that will enable it to buy its Darlinghurst home.

It’s all in contrast to the fortunes of Redfern’s independent theatre Giant Dwarf, which closed in January, and the Old 505 Theatre in Newtown, the previous headquarters of the Sydney Fringe Festival, which shuttered a couple of months later.

Suzanne Millar, creative director of KXT and co-artistic director of Bakehouse Theatre, which curates and manages the theatre, says when it opened in 2016, wedged between the hotel’s sports bar and a thumping dance floor, few expected it to succeed.

“I think everyone thought, ‘Give them a year and they’ll be gone’,” she says.

But KXT pushed on, investing in new writing, providing space and support for young and emerging writers and impressing critics with expectation-busting productions.

Millar says funding is coming from “private sponsorships and partnerships” as well as the City of Sydney and Create NSW.

“KXT is also buoyed by theatre artists and creatives donating their time.”

Featuring a ground-floor 80-seat theatre, with wraparound foyer and bar, the venue also has a downstairs level called The Vault, a multipurpose area with space equivalent to KXT’s current stage.

Millar attributes part of Bakehouse and KXT’s success to its artist-focused programs including residencies, writers’ rooms and support for artists of colour and women-led teams.

“Independent theatre is not a profit-making organisation,” she says. “You’re here to provide pathways and opportunities. You’re here at the beginning of the trajectory of work and artists.

“The independent sector is critical to theatre in Sydney but it is also critically under-resourced. It can’t survive on ticket sales. It’s partnerships and sponsorships opportunities, they’re the things that allow independent theatre to thrive.

“We’ve worked incredibly hard to prioritise key things lacking in our sector in the hope of seeing change.”

When KXT opened, Millar says, new work by Australian writers, although championed by companies such as Griffin, was seen as high risk.

“It still is,” she says. “We want to help people have their big, gnarly, first show that’s not about being perfect but is all about promise.”

Millar points to the work of western Sydney writer James Elazzi, whose first play Omar and Dawn premiered at KXT. His later plays Queen Fatima and Lady Tabouli were presented by Sydney Festival and Elazzi was shortlisted for the 2020 and ’21 Nick Enright Prize for Playwriting at the NSW Premier’s Literary Awards.

Actor, playwright and director Megan Wilding, a Gamilaroi woman, showed her first play, A Little Piece of Ash, at KXT in 2019, before winning the 2021 Griffin Award for New Australian playwriting.

KXT on Broadway is set to open next month and with the new premises will come a much-appreciated upgrade to the most basic of facilities.

“At last, backstage will have dedicated toilets,” Millar says. “No longer will our actors have to queue with the audience to use the bathroom.”

KXT’s next production is Tom at the Farm, August 26 to September 10.

Your cultural guide to going out and loving your city. Sign up to our Culture Fix newsletter here.