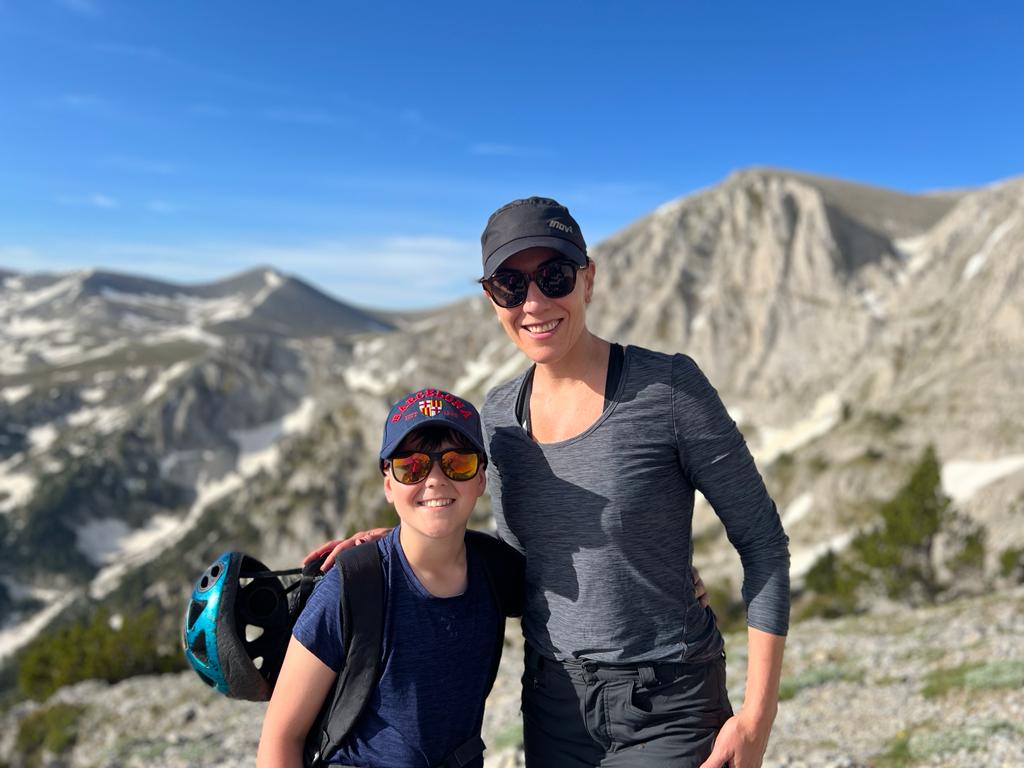 Standing at the summit of Mount Olympus, gazing down past the snow covered slopes to the sparkling blue of the Aegean Sea, I knew we would always have this moment.

At my side was my son Rowan, who had chosen this mother-son adventure to mark his 11th birthday. Leaving his elder brother and dad at home, we travelled to Greece together to tackle the 2,882m climb last month.

For me it felt like a rite of passage – a chance to experience something unique with Rowan that would give us a shared bond and memories, wherever his life may take him.

Turning 11 is a pivotal time. On the cusp of those teenage years, not quite a little boy any more. It’s the last year kids spend at primary school before they go to ‘big school’ and everything changes.

Our Mount Olympus adventure also allowed Rowan to follow in his big brother Conor’s footsteps. Almost four years ago, in October 2018, Conor and I scaled Mount Kilimanjaro, in Tanzania, together to mark his 11th birthday.

These birthday mountain climbs have become a family tradition – giving me a unique connection with each of the boys that I hope will stand the test of time as they become men. One of the most profound experiences of my own life was my trek to Everest Base Camp in 2003, and I wanted the boys to experience something magnificent themselves.

You could say adventuring is in Conor and Rowan’s blood. Their father Terence ‘Banjo’ Bannon became the second person from Northern Ireland to climb Mount Everest in 2003.

Terence and I actually met at Everest Base Camp in the Himalayas. I’m originally from Boston and I’d been teaching in Thailand, and backpacking around China and Tibet.

I went on to be base camp manager while Terence climbed K2 in 2005. We married in 2007 and later separated, but we’re still good friends and for us it felt natural to bring up our sons to be adventurous globe-trotters.

I remember being pregnant and friends telling me I’d need to moderate my lifestyle once I had kids, but I disagreed. I wanted them to experience the world too.

Over the years we’ve taken the boys to Vietnam, Thailand, Belize, India and Mexico. They’ve been backpacking in Borneo, and back home in Northern Ireland they’re regularly out running, cycling, kayaking or hiking in the Mournes Mountains.

They’ve learned about different cultures, wildlife, foods and ways of living. Kids these days are always connected, always on their devices, but our boys know what it’s like to live without electricity or running water, and how to play without any distractions.

My climb with Conor in 2018 was a double celebration, because I turned 40 in the same year he was 11.

We trained together for six months, running and climbing, and that was a bonding experience in itself. I remember a friend pulling her car up beside us in the heavy rain one night and jokingly offering to phone Childline for Conor!

Kilimanjaro was a seven-day climb – at 5,895m above sea level it’s the highest mountain in Africa – so standing at the summit with my son, on October 30 2018, felt absolutely incredible.

We’d had a tough climb, it had rained solidly for the first few days, everything was wet, and sometimes the temperature dropped as low as -15C. Conor had even vomited at one point but he kept going, drawing on physical reserves he never knew he had.

The ongoing theme during this expedition was rain, so we were physically wet the entire time. We would be laying in our tent, with the sides collapsing under the weight of the water, puddles developing by our sleeping bags, and we would just look at each other and laugh.

I do think it’s strengthened our bond in the years since, because we’ve had such a life-defining shared experience. Not many sons have shared a tent with their mum or dealt with altitude sickness beside her.

Children don’t always want to hang out with their parents as they become teenagers, but me and Conor, now 14, have managed to remain close and I’d like to think he feels he can say anything to me. We have quite a ‘cool’ friendship and I think that closeness was strengthened up the mountain.

Mountain Olympus was a very different challenge, but that’s because Rowan and Conor are two very different boys, driven by different things. Conor is very goal-orientated and needed a real physical challenge and the opportunity to set a record, while Rowan wanted to experience breathtaking scenery and was satisfied by the journey.

Again we did months of training. We’re lucky to live close to Northern Ireland’s Mourne mountains so we were out climbing three nights a week. I picked Rowan up after school, with his hiking boots and a snack in the car, and off we went.

The most challenging part of the Mount Olympus climb was the climate because neither of us were used to climbing in such heat. There were also a lot of sheer drops but luckily Rowan has a good head for heights, so to him it was just part of the adventure.

We reached the Skala summit on May 31 2022, after a two-day climb, and again we had that shared sense of elation and an experience together as mother and son that’s totally unique.

During my expedition with Rowan we laughed the entire time that once we’d reached the summit, I’d never drag him out hiking after school again. It’s been a running joke ever since.

It showed Rowan that he has inner reserves of strength and resilience that he can tap into when the going gets tough. Some of the best moments in life come as a result of the efforts we’ve made to get there.

Both of my boys have also used their mountain climbs as opportunities to raise money for charity. In 2018 Conor collected sponsorship for the Northern Ireland Children’s Hospice, and this year Rowan supported a fundraiser for a local boy called Aaron’s Mission to Walk.

They both chose their charities themselves and it really resonated with them – giving something to focus on in the tougher moments.

It’s important that they know that the opportunity to climb these incredible mountains is a huge privilege – not just a fun holiday – and they ought to use it as a chance to do something really worthwhile and think about people who aren’t as lucky as they are.

My connection with mountains goes much deeper than the physical challenge they present. I love the raw wildness. Mountains are definitely my spiritual place – it’s as close to religion as I will ever get, so having been able to share that with each of my sons in turn is very special.

As told to Jade Beecroft