‘Awful’ Jeepers Creepers reboot is blasted by critics and fans, with some saying the latest instalment ‘should never have been made’ and that it has ‘ruined the franchise’

A 2022 reboot of Jeepers Creepers has been met with dismal reviews from fans and critics alike who say the franchise ‘will never be the same’.

This latest instalment of the 2001 series – its fourth – was taken over by Timo Vuorensola, after the original director Victor Salva was ousted several years ago when his 1988 conviction for molesting a 12-year-old boy was widely publicised.

Some fans of the 2001 original and its sequel Jeepers Creepers 2 (2003) have criticised changes made by Vuorensola, citing ‘sloppy’ CGI, and a ‘non-sensical’ plot among the film’s weaknesses.

However, it is the reimagined Creeper – the central villain – which has come in for some of the harshest criticism, with some moviegoers saying it has reduced the picture to a ‘slasher movie’.

The creeper, a flesh eating monster who rises every 23 years to feast on people’s organs, was first seen when Justin Long and Gina Phillips (playing Damien and Trish) took a highway trip in the first film 21 years ago. 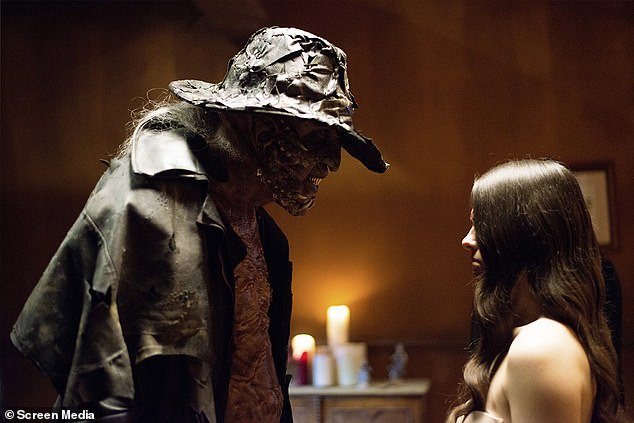 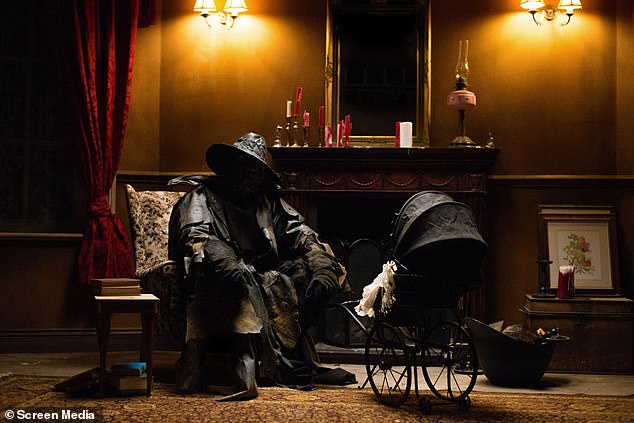 It reappeared in the sequel, which was also adored by creeper fans, that tells the story of a group of high school kids trapped on a highway in a school bus during the last few days of the creeper’s feeding frenzy.

The first two films in the series were hugely popular: Jeepers Creepers opened in 2,944 theatres taking in a US gross of $37.9 million; it later made $21.3 million internationally, making a total of $59.2 million worldwide.

It broke the record in the US for the highest ever Labor Day opening weekend four-day gross, holding the record until the 2003 release of its sequel.

A third film hit screens in 2018, once again directed by Victor Salva.

Sandwiched between the first two chronologically, it introduced a ‘creeper team’ comprised of people who had lost friends and family to the beast. 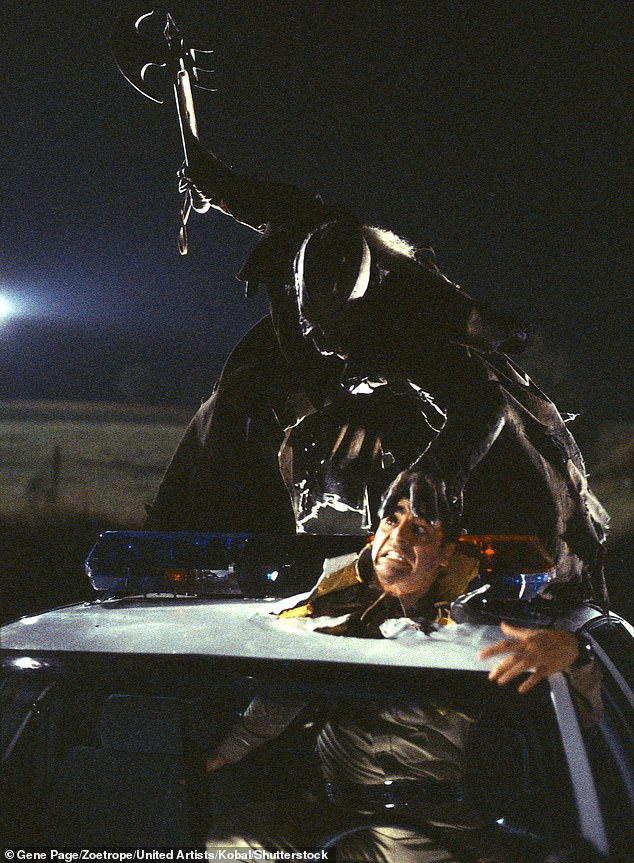 Jeepers Creepers 2001, pictured above, grossed millions at the box office upon released which was only surpassed by the sequel in 2003 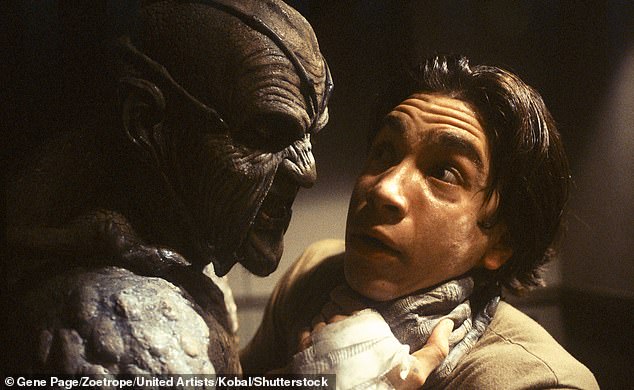 Justin Long plays the unfortunate victim of the Creeper, which sees him taken to the monster’s ‘House of Pain’ in the 2001 flick 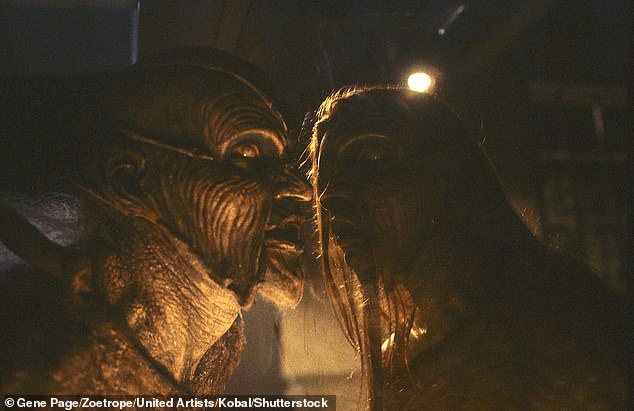 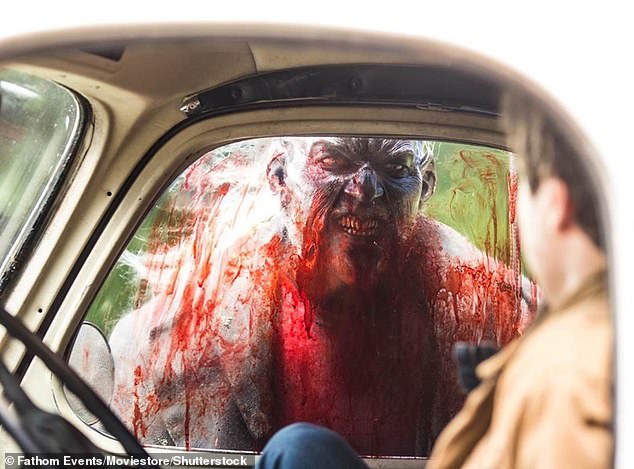 Jeepers Creepers 3, (pictured) was also a dud according to fans, who said the 2018 sequel didn’t measure up to the first two

While it teased some creeper folklore, and hinted at how the mysterious and seemingly indestructible creature came to be, fans were still left looking for answers, bringing about hope for a fourth version to tie up loose ends.

Overall, this instalment was less successful than the first two, and after it was panned by moviegoers, Timo Vuorensola said in a YouTube interview that he would take over the franchise and give it ‘new life’.

However, Jeepers Creepers Reborn, which stars Jarrueau Benjamin as the creeper, alongside Imran Adams and Sydney Craven as the main protagonists, has disappointed many.

It shows the couple travelling to a horror festival, where they end up in a creeper-themed escape room – the first three films are referenced as fictional and the creeper has ‘fans’ who then try to sacrifice a pregnant Sydney to the hungry monster. 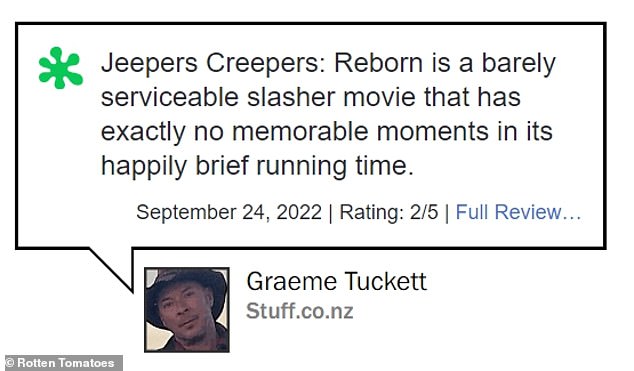 Meanwhile, people took to Twitter to criticise the horror revival, with some saying the franchise now ‘needs to end’

Film lovers on Rotten Tomatoes were also quick to criticise the film, with one branding it a ‘chepa knockoff’ of the original

But it fell flat for many viewers, among them long-standing creeper fan, Christian, 28, an actor with Hunwick Associates Ltd in the UK.

He told FEMAIL: ‘I was excited for Reborn because I was a huge fan and after the third film the franchise needed redemption but it’s just been ruined.

‘It’s not scary. The creeper to me was an un-killable monster and that’s what was so terrifying –  a lot of people can agree that being eaten is one of the scariest things.

‘But with this film it wasn’t true to the first two jeepers creepers, the third one and this latest one felt like a cash grab.

‘However I don’t blame the actors for the way the film turned out, the result is in contemporary filming practices.’ 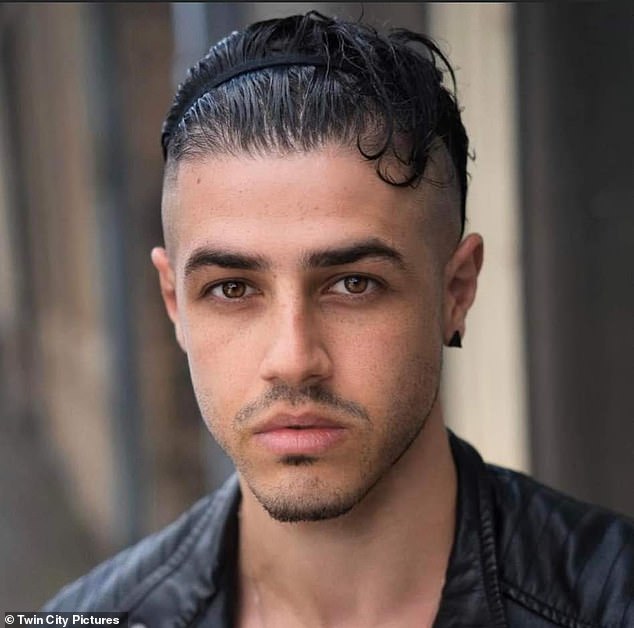 Christian, 28, an actor from Hunwick Associates in Edinburgh is a long standing creeper fan and says that ‘he doesn’t blame the actors for how the film turned out’ 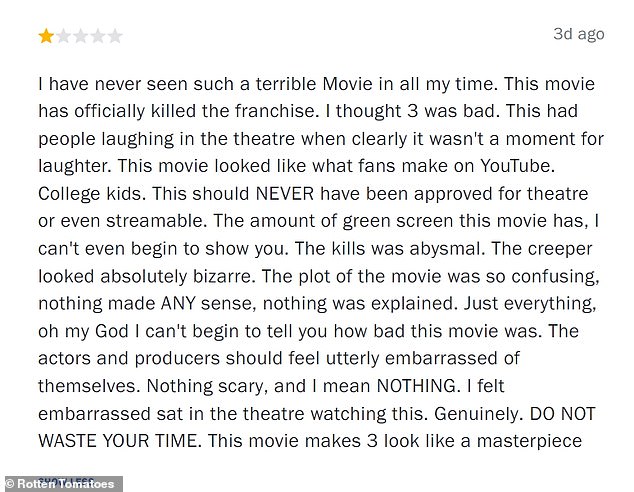 The film had a rating of 16 per cent on popular review site Rotten Tomatoes, with critics also giving their weight to the negative feedback

He added: ‘Now that we are moving into an age of CGI the heart of film is being lost in a general sense because good cinema makes you feel like you are there, and if things have sloppy CGI in a studio it cheapens the feel instead of using a real location.

‘I’ve always found the creeper chilling, but this new version looked like a Halloween costume to be honest.

‘I’ve done CGI in a lot of my drama school projects and a movie with the name Jeepers Creepers I didn’t expect it to be bad as it was – I didn’t feel like I was there, in the original you meet the creeper for the first time from a shaky camera angle in a car and you felt like you saw what Darius and Trish were seeing.

‘With this new one it has too many transitions in scenes it didn’t feel like you were a fly on the wall.’ 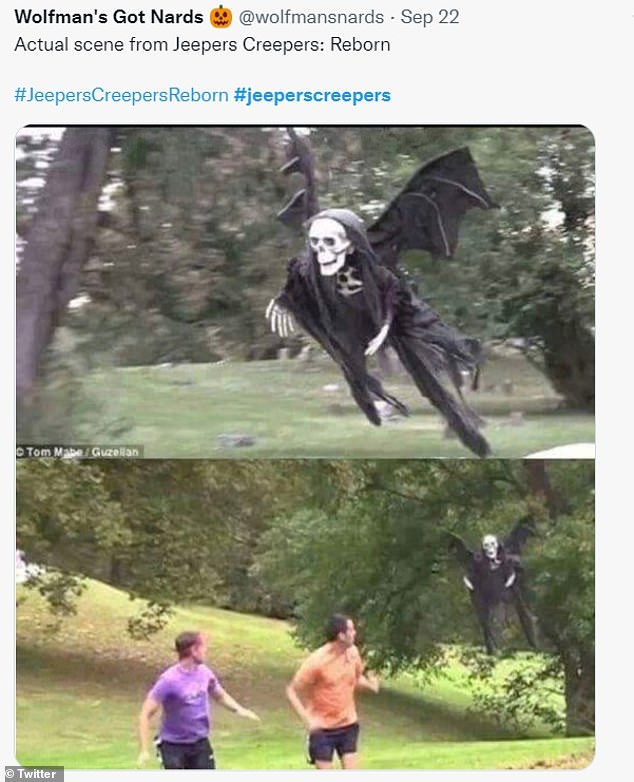 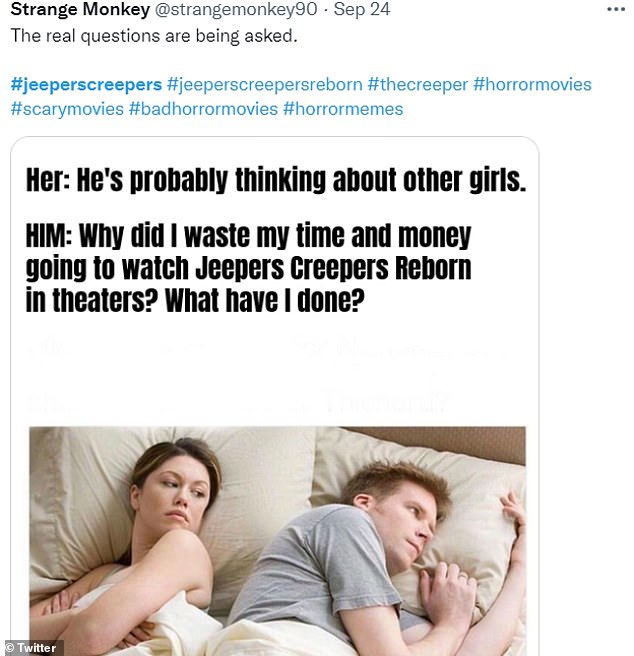 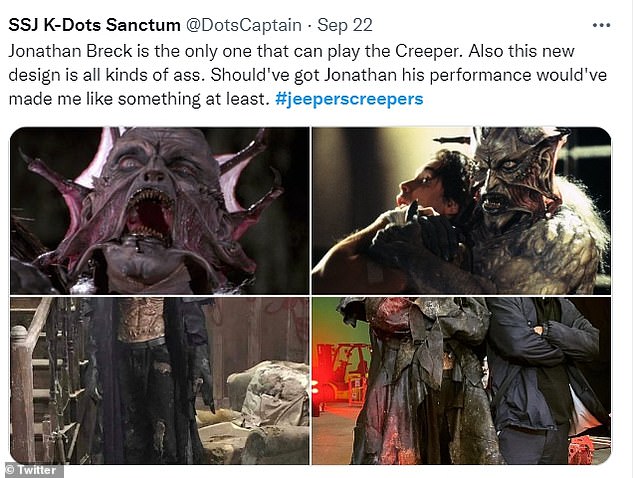 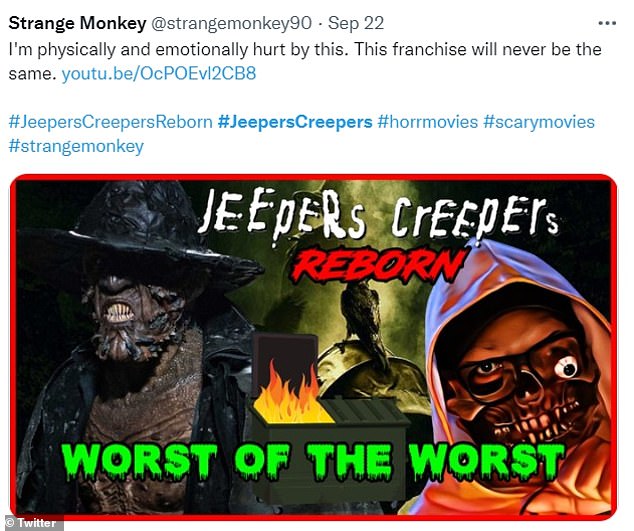 Fans took to Twitter to joke about the new film, with one even posting a meme about the CGI quality

His sentiments were echoed by online reviewers, with one Twitter user writing: ‘God, Jeepers Creepers Reborn was awful. As bad or worse than 3. This franchise needs to end. Full spoiler discussion video up tonight.’

Other’s called for the original actor who played the demon Jonathan Breck, to come back saying: ‘Jonathan Breck is the only one that can play the Creeper. Also this new design is all kinds of a**.

‘Should’ve got Jonathan his performance would’ve made me like something at least.’

Someone said: ‘I’m physically and emotionally hurt by this. This franchise will never be the same.’

Meanwhile Guardian film critic Phil Hoad said the flick was was made with a ‘low rent boogeyman’ and is essentially ‘IP cannibalism’.

The cast and director have yet to comment on the avalanche of negative feedback.