The Miami doctor who performed the treatments for free shows off some of the results.

The woman who became a symbol of the horrors of the Vietnam War when she was just 9 years old just hit a major mark in her physical recovery 50 years later.

This week in Miami, Kim Phuc — also known as “Napalm Girl” from Nick Ut’s Pulitzer Prize-winning photograph for the Associated Press — received one of her final laser treatments for the burns she sustained as a result of the attack. And Ut was once again by her side as it went down.

“Today we welcomed back Kim Phuc, the girl from the historical Napalm photo taken by Vitnamese photographer [Nick Ut],” Miami Dermatology & Laser shared on Instagram, along with the original photograph and shots of Phuc’s treatment.

“This month marked 50 years since this photo was taken,” the caption continued. “Today we celebrated her and her beautiful life. Kim received laser treatment by Dr. Waibel to help her scars and pain.”

You can see Phuc getting the treatment on her arm in the third slide here:

Phuc, now 59, has been going to Dr. Waibel for years, who has been using a fractional blade laser to “vaporize the scar tissue.” Per CBS News, Phuc has been living with pain and restricted movement since the napalm attack on her village on June 8, 1972.

“I always say it’s like boiling water on the stove, it literally steams it up but they’re the tiniest holes the human body has ever seen, and the human body is able to heal that,” the doctor told the outlet, also confirming she’s been doing the work for free because her client is, as CBS put it, “a symbol of peace and hope.”

After 12 visits to Waibel, Phuc said her pain is “so much better” now. From here on out, she’ll only need a few minor treatments.

Both Ut and Phuc recalled the events of June 8 as well, with Phuc crediting the photographer for saving her life by helping her get treatment immediately at the time. “To be honest he saved my life, and he became a part of my family,” she told the publication. 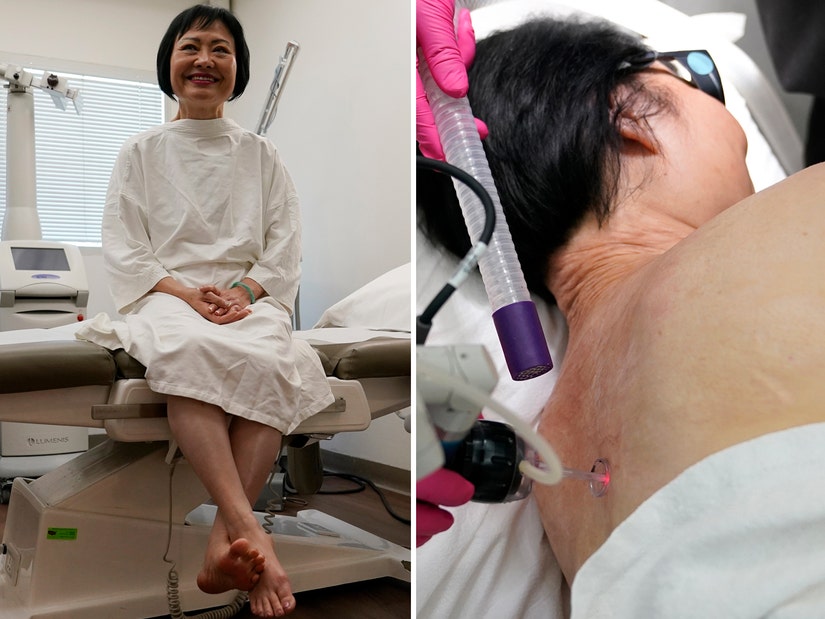 In an op-ed for the New York Times earlier this month, Phuc said she was “forever thankful” for Ut’s actions that day. However, she also admitted to “hating him at times” because she “grew up detesting that photo.”

“Growing up, I sometimes wished to disappear not only because of my injuries — the burns scarred a third of my body and caused intense, chronic pain — but also because of the shame and embarrassment of my disfigurement,” she wrote.

“I have carried the results of war on my body. You don’t grow out of the scars, physically or mentally,” she added.

“I am grateful now for the power of that photograph of me as a 9-year-old, as I am of the journey I have taken as a person. My horror — which I barely remember — became universal. I’m proud that, in time, I have become a symbol of peace. It took me a long time to embrace that as a person,” she concluded. “I can say, 50 years later, that I’m glad Nick captured that moment, even with all the difficulties that image created for me.”

See more of Phuc’s story below: