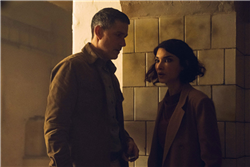 The increasing sense of precarity around the world’s infrastructure would seem to help Peacock’s “Last Light” resonate: The limited series depicts a disruption in the world’s supply of petroleum, setting off a major energy crisis and fears of global cataclysm. And yet the series never finds its gear, existing as a ripped-from-future-headlines thriller that’s neither particularly credible nor especially thrilling.

Here, Matthew Fox plays the chemist Andy Yeats, who finds himself drawn into the crisis; as the world lurches into a moment of uncertainty, he’s separated from his family, trying both to find his way to them and to do what he can to bring the world back to order. The family struggles seem calculated to wring emotion from viewers, with Andy’s son (Taylor Fay) gradually losing his sight in a way that tests the tender stoicism of mom Elena (Joanne Froggatt). There’s, too, a sort of schematic element to the climate activism of Andy’s daughter (Alyth Ross); little does she know just how much her dad is doing to protect everyone’s future.

The nature of the threat against the global oil supply ends up being almost too preposterous to take seriously; the advantage villains in James Bond movies have is that, bolstered by confident filmmaking, their harebrained schemes at least look cool. When we’re told in a rush at the end of “Last Light” precisely how things have wound up, it seems a bit as though director Dennie Gordon (working off of an adaptation of Alex Scarrow’s novel) has simply run out of interest.

Froggatt, of “Downton Abbey,” acquits herself best among the performers. Fox, in his first series since “Lost,” struggles a bit in the lead role, having been asked to balance a scientist’s cool-burning intellect with a father’s heated passion for family. The result is lukewarm. And “Last Light,” despite featuring two well-known performers, isn’t going to be the drama that breaks out of a streamer that’s experienced its own supply problems of late.