The talent and tragedy of painter Eric Ravilious 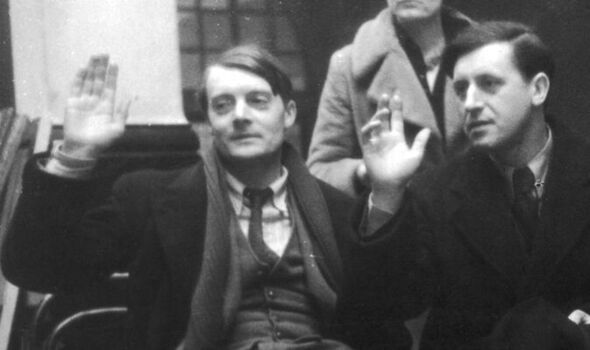 But 40 years later all that changed when a treasure trove of his work was discovered underneath the bed of his fellow painter, neighbour and friend, Edward Bawden. Overnight, Ravilious was revealed as one of Britain’s most exceptional artists. His gentle, beguiling pastoral scenes captivated millions, including artists as varied as Grayson Perry and Chinese dissident Ai Weiwei.

The playwright Alan Bennett discovered Ravilious as a schoolboy when he noticed a reproduction of his painting, Train Landscape, on the wall of his classroom. He is still a huge fan.

“He is so loved,” Bennett says, “and yet he nevertheless is a shared secret.”

Now a riveting new documentary, Eric Ravilious: Drawn To War, opening today in selected cinemas, is poised to reveal that secret to a wider audience.

It is written and directed by award-winning filmmaker Margy Kinmonth.

“He really is in that tradition of great British landscape artists such as Constable, Gainsborough and Palmer,” she says. “I would put him up there with Turner as a great landscapist and with Hockney as a storyteller.”

With his evocative depictions of the timeless rituals of agriculture and the chalk downs of the south, especially the white cliffs of Dover, Ravilious is possibly the quintessential English painter.

Art historian James Russell is happy that the world is finally able to enjoy the paintings, from enticing rural scenes such as The Westbury Horse and Wiltshire Landscape, to powerful images of war – HMS Glorious in the Arctic, April 1940, and Midnight Sun.

“The loss of him as an artist meant that a potential avenue of art was cut off, and we’ve only been rediscovering him this century. But it’s marvellous that it’s happening,” he says. 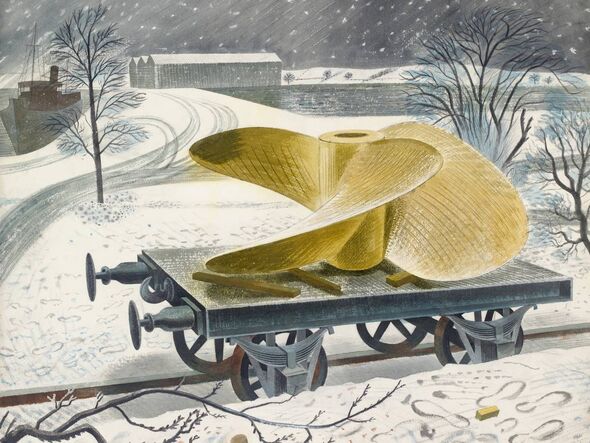 Grayson Perry is equally delighted. “What Ravilious does is take fairly unprepossessing subjects and make them into masterpieces,” he says.

Pointing to a picture of the interior of a dank house, Perry says: “You can almost smell the damp looking at this painting. Those sheets, – you’d want to air them, wouldn’t you? I love it when an artist can make a great work out of pretty basic subject matter.

“I use him as a touchstone of English tone. There is something so English about his palette and the way it teeters between expressiveness and quite clear-cut design.”

Margy Kinmonth chips in: “When I was filming, I was very aware that I was pointing the camera up into the same sky that he would have been painting. The chalk figures and paths in his work are unbelievably English. We walk on chalk all the time.

“And the White Cliffs of Dover are a very English symbol.They are a throwback to that time just before the war and the threat of the German bombers coming over. The triggers you find in his paintings strongly remind you of being English.”

His watercolours are also often viewed as cosy, the sort of art to adorn mugs, tea towels and greetings cards. But that is to ignore the darkness in his work.

“I would find it hard to say what it is to be English, but Ravilious is part of it,” observes Alan Bennett.

However, “His definition of Englishness is not cosy. It’s too rigorous for that.”

Citing the painting Tea At Furlongs, he adds: “It has afternoon tea set out in the garden of a cottage against an idyllic view. You couldn’t imagine something more cosy, but it’s not cosy. It’s slightly ominous. There’s nobody there, for a start, and there is a feeling that something is going to happen. 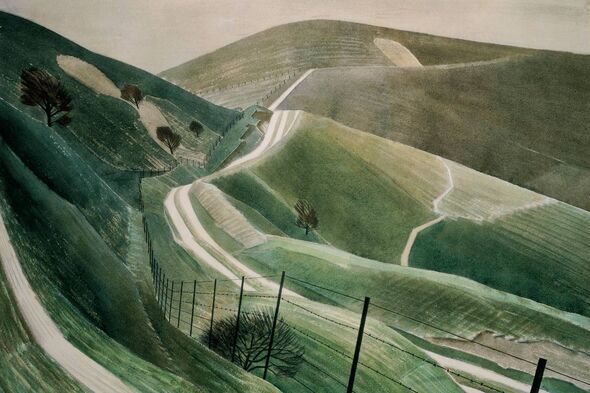 “In WH Auden’s words, ‘Something is going to fall like rain. And it won’t be flowers’. Tea at Furlongs, I have always thought, could be called Munich 1938.”

It would clearly be wrong, then, to read Ravilious’s paintings as purely sentimental.

According to Kinmonth: “He was a survivor of a very, very difficult childhood because his family had gone bankrupt in the First World War and had to keep moving house. His father was very devout. He had the words ‘God is love’ engraved on his hat.

“He even engraved it in a marrow and let it grow.”

As a result, the director adds: “Eric never set foot in church. He became determined to survive on his own. That helped him grow as an artist.

He won a scholarship to the Royal College of Art, where he was taught by the great First World War artist Paul Nash. That’s where he learnt incredible discipline and ruthlessness.”

Ravilious really found his voice as a painter when on Christmas Eve 1939, Kenneth Clark, then director of the National Gallery, chose him to be an official war artist.

He was made a captain in the Royal Marines and accompanied sailors on ships and submarines.

The role was enormously dangerous and worried his wife Tirzah Garwood, whose letters are used in the documentary.

She wrote to him: “It’s very alarming to us thinking of you in the flotilla with bombs dropping all around you. The situation is a waking nightmare. 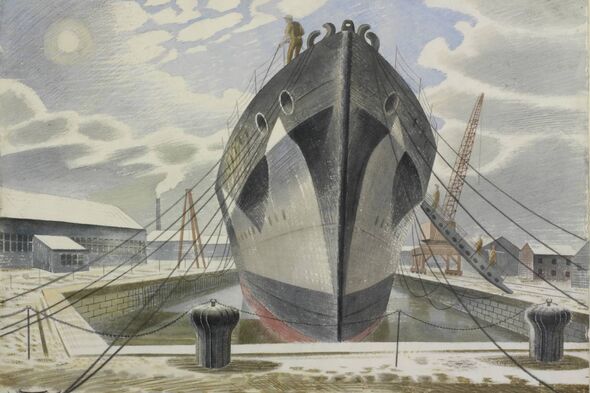 “It is terrifying to know you’re witness to a real war now, under fire from the Germans.”

Her concerns were justified. Just two days after her husband had finished painting on the Royal Navy battleship HMS Glorious, it was sunk with the loss of 1,500 British seamen.

But there is no doubting the frisson Ravilious experienced in the heat of battle.

He wrote: “I feel a stir in me that it is possible to really like drawing war activities. It interests me to the bone and marrow.”

It is true that the adrenaline flow sparked by war can give an artist a huge creative boost.

“War is horrible,” affirms the playwright Julian Mitchell. “But on the other hand, for people who have been at home all their lives, it opens life up to them.

“They see things they would never otherwise have seen, and for an artist that’s wonderful. Ravilious would never have gone to those places if it hadn’t been for the war.”

What is most impressive about his work as a war artist is that he painted what he saw; he refused to be a propagandist.

“It’s hard for a war artist to glamorise war because the result is very clear,” says Ai Weiwei.

“It’s destruction, it’s ruin, and it’s tragedy. The artist functions more like an interpreter to record what is actually happening.”

Whatever official pressure he may have been under as a war artist, Ravilious always remained true to himself.

“All artists have a mood that they are drawn to,” Grayson Perry comments.

“Ravilious wasn’t going to do some screaming propaganda campaign, fizzing with fear and anxiety.”

A heavy air of tragedy hangs over Ravilious’s death, the 80th anniversary of which is later this year.

Attracted by Iceland’s stark landscape and pellucid light, in the summer of 1942 the artist went to paint the Arctic convoys to the

Soviet Union that followed the so-called “Roof of the World” route.

As Ravilious left the family home, his wife recalled, “his face was wet with tears”.

Maybe he had a premonition? Always open to new experiences, he eagerly joined a search and rescue mission for a missing US airman on the morning of September 2.

“Would you like a pair of gloves, sealskin with fur on the back?” he wrote. “Draw around your hand on writing paper so I can get the size. Goodbye darling. Hope you feel well again.”

Anne Ullmann, their only surviving child, recounts how, in the aftermath, a neighbour brought Tirzah a parcel containing her late husband’s effects.

Anne recalls her mother “taking out all his red spotty handkerchiefs and weeping her eyes out”.

It took more than two years and 49 letters to the War Office for Tirzah to be granted a widow’s pension because Ravilious was said to be simply missing, rather than formally deceased.

Sadly, she died from cancer just nine years after her husband’s disappearance. Their three children grew up as orphans.

Bennett maintains that Ravilious showed astonishing courage. “Being a war artist for him wasn’t a soft option. On the deck, on the submarine, on the plane, painting was his active service, and he gave his life for it. This was a brave man.”

Perhaps the last word should go to the Navy Condolence Officer who wrote to Tirzah after her husband’s death: “From the artistic side, his loss is really deplorable. He will be quite impossible to replace.”