It’s truly remarkable to think it’s been over 15 years since Enchanted was first released in 2007. And yet Amy Adams’s overtly saccharine, yet boldly determined, portrayal of Giselle—not to mention those v catchy songs she belts—remains familiar to all who watched the film on our significantly-boxier TV screens way back when. Now over a decade later, the Disney film is finally getting a sequel in the appropriately-titled Disenchanted: a look at what Giselle’s happily ever after looks like once she leaves New York City for the suburb of Monroeville.

Her now-teenage stepdaughter Morgan, played by Gabriella Baldacchino, is a character whose storyline is at the very heart of Disenchanted…arguably moreso than even Giselle’s this time around. And without giving *too* much away, her nuanced persona— equal parts brooding teenager and resolute heroine—is captivating to watch. Cosmopolitan sat with Gabriella to talk all about the film, including what it was like joining a cast she wasn’t part of the first time around, how her family reacted to her landing the role of Morgan, and what it was like working closely with Amy Adams herself.

This is your first role in a Disney movie; Congrats! What was the experience like?

Thank you! Honestly, it’s so hard to describe this experience as a whole. I feel like I’m just at a loss for words. It really came as such a shock because I didn’t think my life was going to take me in that direction since I was at film school at USC with the intention of being a filmmaker.

I think what was incredible about this project was it was kind of the most surreal learning experience I could have asked for. It was a masterclass in acting from this incredible cast, I got to sit with our amazing director Adam Shankman when I wasn’t on camera and watch him work, and I talked to the film crew and our producers. I just wanted to learn so much from every single person and just soak up every piece of information possible. So it was beyond anything I could have ever imagined. It was pretty surreal.

Yeah, that sounds amazing. What parts of your character, Morgan, do you feel like you related to the most?

There’s so much that I relate to with Morgan. I mean, definitely her sense of humor, first and foremost. She’s kind of dry and witty and she loves sarcasm, and she loves to give people a hard time in an endearing way, you know? She really leans into that with the sarcasm.

Also, I also get to sing this really incredible song in the movie that I love so much because we get to learn and understand what Morgan is thinking and feeling. It’s really about this pressure that she feels to be perfect; she’s living in this perfect fairy tale world, and she feels like if everything around her is perfect, then why isn’t she? And I think so many people, myself included, can really relate to what Morgan is feeling: this pressure to have it all figured out, especially as we’re growing up and that maybe “perfect” isn’t perfect for everyone, and we’re all just trying to find what’s perfectly imperfect.

Right. I feel like Morgan has a lot more of a moment in the second iteration. How closely did you study her original depiction? Were there any mannerisms you made sure to include in your own portrayal while also making her your own?

Yeah, definitely. She was so young in the first movie. Enchanted was literally my favorite movie growing up, which makes this all super surreal to me. So I think we can say I was pretty well studied! I’ve watched it countless times, and at the time I had no idea what I was preparing for, or that I was even preparing for something, I guess. So I think teenage Morgan, even though she’s all grown up now, still has that same adoration for Giselle even if it’s buried a little deeper down beneath the sarcasm.

I think a good example is when they’re moving into the new house, and Morgan feels like Giselle is about to break into a song and begs her not to sing. *Laughs* She’s clearly exasperated, but I never wanted it to feel like Morgan was annoyed or judgmental in any way because it’s really amusing to her. And I didn’t want to lose that part of Morgan’s admiration for Giselle—the relationship that we know and love and see so much of in the first Enchanted. I think it brings back the childlike wonder that I really wanted to focus on from the first movie. I wanted to honor that.

I feel like those character interactions are so amazing. Did you feel like it was relatively easy to find your groove even though you were new to this group of actors?

Yeah, being new at first is a little daunting because you’re stepping into this Enchanted universe that’s so established. But absolutely, it was crazy because I grew up looking up to this cast so much and I never felt anything less than welcomed and embraced on set. And that was honestly the coolest thing. I mean, it had been 15 years since all the original cast had been together, so there was just so much excitement surrounding this reunion. There was just love from everyone, and it was really the most joyful atmosphere. 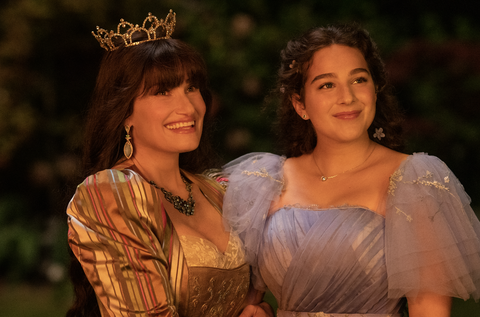 Yeah, and I can only imagine that shooting with Amy Adams was also amazing. What was it like to act with her, especially in those moments where Morgan feels like she’s going to lose Giselle? It was definitely one of the more emotional scenes for me. Like, did I cry? Maybe! *Laughs*

Yeah, it was definitely emotional. There were a lot of tears, even in between takes when the camera stopped rolling. I think we were still kind of feeling it all, and feeling the weight of that moment. It was a really quiet day on set. It was just Amy and I, and our director created this really intimate environment. He had just a few people in the room when we were filming, so we were able to just feel really close. I think also, all the emotions that I was feeling in this scene were really heightened for me, because this was the scene that I read with Amy in my chemistry read when I was in the audition process like six months prior. And so I was just sitting there on the tree stump on the ballroom floor with her, and we were actually filming the scene together, and it was just unbelievable. Everything leading up to that moment just flashed before my eyes. It was just one of those moments that I’m just holding onto forever.

100 percent. Can you think of any sage words of advice that the cast gave you during your time on set?

Oh, yeah! Everybody in the cast was so supportive and so wise. I think I’ve picked up an entire list of words of advice along the way, and from our crew too and the creative team. To learn from that group of people was just incomparable.

What comes to mind first is…I guess when we first got to Ireland, before we started filming, I got to spend a lot of really special moments with Amy kind of just building that relationship with her as mother and daughter. On one of our first days together, we had this real heart-to-heart conversation that I think I will literally carry with me for the rest of my life because, coming into this process, I felt a lot of pressure. A lot of it was self-inflicted because I tend to be really hard on myself. But instead of telling me to not feel that way, Amy said that any insecurity I was feeling—any pressure—to not deny myself. That I didn’t have to suppress that feeling. That I could just feel whatever I wanted to, and that I could use it and bring it to Morgan. And I think I’ve been able to use that not just in that moment, but really in life in general.

That’s so nice to hear. I mean, she seems like the most comforting person ever.

She really is! She’s everything that you want her to be and more. She’s honestly like a real-life Giselle. She’s such a mothering and wise figure, so it’s so cool.

What do your friends and family think about you landing the role, and who had the most memorable reaction to you telling them the news?

I’m trying to picture them all, but the way it kind of went was it all just started with pure shock. Like, everyone had to just stop and take a second to process it. And, I mean, I had that same reaction too when they told me. I was literally just frozen. But the first person I called was my mom, obviously! And she started screaming, and then my sister ran into the room, and then my dad ran into the room, and it was crazy because I actually didn’t get to share the moment in person with anyone. It was all over FaceTime because we were in different parts of the world during the pandemic, so I had to call everyone. 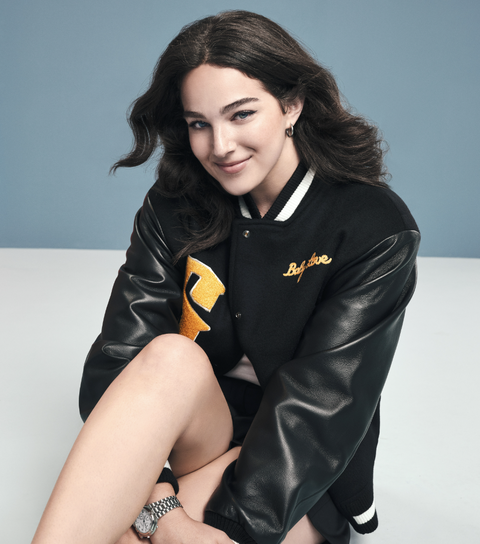 I always laugh at my best friend Matt’s reaction, because when I called him and told him, he just actually stared at me on FaceTime for a good 20 seconds, maybe more. And then, all of a sudden, he just started screaming. Like, the phone camera was shaking! He genuinely lost it, and I was just laughing and crying. It’s really special because I think everyone who is close to me knew how much work I’ve put into landing something like this all my life from such a young age. I think it was really such a special moment to share with all of those people who have just constantly been supporting me along the way.

That’s amazing! And I mean, honestly, the fact that it’s a Disney picture is such a big deal, too. It’s a massive springboard. So I can imagine your life is going to be very busy from here on out.

It’s also crazy because for so many of my friends, it was integral part of all of our childhoods. We grew up worshiping this movie, and to be a part of that—something that has such a special place for all of us—was just mind blowing.