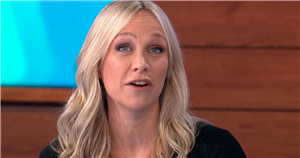 Chloe revealed that she’d previously always been a bit of a “daddy’s girl” but during her pregnancy this changed a little and began to balance out as she leaned on her mum,Judy Finningan, more for advice.

In response to this comment, panellistCharlene Whitejoked: “Is that why he revealed your birth dateon GMB? Perhaps he was feeling a bit jealous.”

With Chloe then going on to explain what happened following her dad’s slip-up.

She said: “Honestly, you know how one of your talking points on the show today is ‘do your parents still have a go at you?’ I would say that for me it’s the other way around.”

Explaining she adds: “I got a message on Instagram from someone like ‘oh my god we have the same due date’ and I was like ‘what? How does this random woman know my due date?’

“And then I went on the MailOnline and I saw it and I was like ‘oh dear lord’ and I had the biggest go at him, and then I felt really guilty.”

Although, Richard appears to have made-up for this mistake, as Chloe reveals that her father takes Bodhi for an hour every day.

She says: “It's really cute – Dad will take her for an hour every morning upstairs just to lie in bed with my Mum while she reads the papers. I get an hour to just have a shower! Just that, is incredible.”

Chloe explained she’s currently living with her parents Richard and Judy in their home, explaining: “We’re having our house redone and we needed somewhere to live.

"I tentatively asked Mum and Dad, ‘How would you feel if we were to come and stay just for a week?’ My mum – because I was heavily pregnant at the time – thought her birthdays and Christmases had all come at once.”

He said: “We had this emergency C section, so I changed the first nappy”. He said of the birth: “I could see this midwife was on me, ready to correct me.

“I'd honestly sat through six hours of hypnobirthing antenatal classes – if you ever need any advice, I’m basically a qualified midwife.

“I changed this nappy and she went, ‘You know what, I'm going to give you five out of five, that is the best nappy change ever.’ I’d been practising on a doll.”