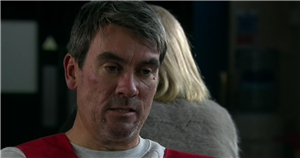 Emmerdale fans are convinced Aaron Dingle may be behind Al Chapman's murder and are certain it wasn't Cain Dingle as originally thought.

Earlier this week, things took a devastating turn in the village when Al was found dead in a barn with Cain holding a shutgun pointed in his direction.

Trying to escape the situation, Cain was caught red-handed with the gun in his hand by Kerry Wyatt who happened to hear a loud noise.

But although most fingers are pointing in Cain's direction, some viewers seem to think that Aaron may be responsible for the death of Al.

Taking to Twitter, one person wrote: "This shooting has Aaron all over it.. Cain was just there."

Another penned: "I've got a feeling Cain didn't do it and is protecting someone Aaron perhaps?? Hope Chas gets her comeuppance though."

A third wrote: "Anyone else thinking Aaron killed Al? I originally thought Aaron and Cain would kill al together but now I'm thinking it was just Aaron, no way would Emmerdale send Cain down forever, whereas with Aaron leaving, him going to prison & reuniting with Robert would work."

While a fourth viewer added: "What is Chas going to say when she finds out Aaron killed Al and not Cain cue flashback episode."

Aaron recently left the village on bad terms following his sister Liv's death and after he discovered Chas' affair.

This is a live TV story and is being constantly updated. Please refresh the page regularly for the latest news, pictures and video.

You can also get email updates on the day’s biggest TV stories straight to your inbox by signing up for our soaps and Hot TV newsletters .

Get all the very best news, pictures, opinion and video on your favourite TV shows by following Daily Star every time you see our name.

Keep up-to-date with your must-see TV stories, features, videos and pictures throughout the day by following us on Facebook at facebook.com/DailyStarShowbiz