Emmerdale spoiler video: Dan discovers Noah and Amelia are seeing each other 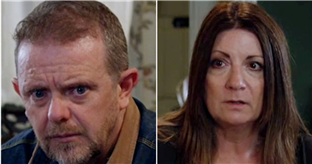 Harriet Finch (Katherine Dow Blyton) fancies herself as the next village gossip in upcoming Emmerdale episodes as she decides to tell Dan Spencer (Liam Fox) that Noah Dingle (Jack Downham) and Amelia (Daisy Campbell) are seeing each other.

Amelia and Noah struck up a friendship when the teen was behind bars for stalking and harassing Chloe (Jessie Elland).

Amelia started to wonder if Noah was allowed a second chance but also, she was struggling with body image issues and really needed someone to talk to that wasn’t her dad or someone in the village.

With Noah out of prison and also aware Amelia is pregnant, he has continued to show her support but if this new video is anything to go by, his friendly attitude is going to turn into something more.

Still living at Harriet’s, Dan is left wondering why Amelia’s GCSE results aren’t as good as he anticipated.

After Harriet mentions Samson (Sam Hall) getting amazing marks in his exams, topic of conversation soon turns to Dan’s hateful feelings towards Noah.

Feeling as though she has no other choice, Harriet tells Dan that he may need to change his view of the teen, as he could be spending a lot more time with him.

Confused, Dan wonders what Harriet is talking about, and she then reveals she saw Noah and Amelia kissing.

His anger growing, what will Dan do next?

How badly will he react when he comes face to face with Noah?