If the idea of the future presented in “Moonhaven” doesn’t feel like anything else in recent sci-fi storytelling, it’s probably because the list of visual and spiritual inspirations for the show is short on other examples of sci-fi storytelling.

Most of the six-episode opening season of the AMC+ drama concerns itself with the goings-on at a lunar colony centuries in the future. Removed from the preconceptions (and mounting strife) of Earther society, the third generation of isolated, AI-guided moon inhabitants have flourished, and are ready to share their secrets with those back on the Blue Dot in their sky.

It’s an easy enough premise to grasp, but creating this alternate world of “Moonhaven” meant sifting through an endless number of visual and logistical possibilities. Showrunner Peter Ocko looked to some Earthly examples as a spiritual guide.

“In the beginning, we were saying, ‘What does this city look like? How big is it?’ My initial thought was ‘college town’ because in a way, I wanted to still be able to feel that any individual within that society could feel the edges of it,” Ocko said. “Literally, we have a fence that separates you from what we call the Fringe Land, but I wanted the characters to be able to feel the outside of their world without it feeling so expansive that an audience would get lost in the idea. It was really important to me that it not feel too big.”

At its most fundamental, “Moonhaven” jettisons most of the expectations of a moon life’s color palette. For its many outdoor scenes, the show trades away the usual drab grays of moon dust for the natural beauty and lush green landscapes of Ireland. On top of that, “Moonhaven” adds a textile rainbow, so that the look of this society is never dominated by one particular part of the spectrum. Production designer Philip Murphy explained that having that strong base opened up all the possibilities that came along with it.

“Our directors Bridget [Savage Cole] and [Danielle] Krudy were very keen that we had nature’s colors and nature’s palette. When you think of nature and nurture, and you see those lovely greens and those tones, they’re pleasing and safe colors, and they reinforce that. We’ve got a lot of deep dark greens, and a lot of natural wood, and lovely blues as well. Then, of course, our costumes were sort of complementing and contrasting at the same time,” Murphy said.

At the same time, it was important for Ocko for those colors not to feel ironic. The goal was to make a place that, especially at the show’s outset, felt serene and comfortable in an entirely genuine way. 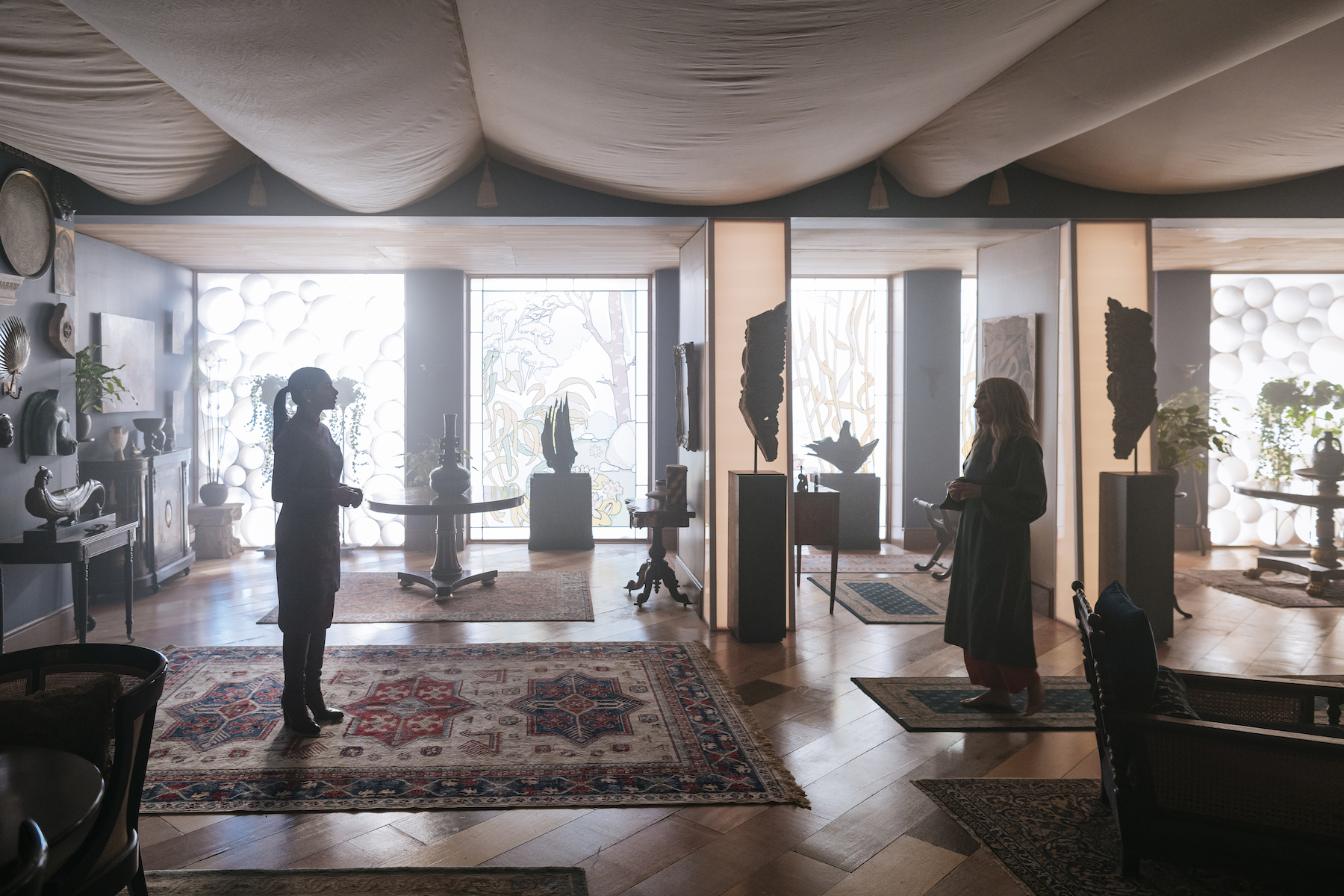 “Jim Gavin warned me in the writers room that every story about a utopia turns into a story about dystopia,” Ocko said. “It seems inevitable. I felt like my goal was to not let that happen. We may go through challenges, and we’re certainly not immune to that story. But the idea that these people live a full, emotional, expressive life is really important. They don’t harbor some secret cannibalism. There’s not going to be some reveal that they are truly ignorant of something awful. These are a smart, self-aware, community-based people. It’s important that that be strong, rather than seem naive or weak.”

With the artificial intelligence IO terraforming a portion of the Moon where people can freely breathe and drink and eat and walk in familiar gravity, the next biggest concern for the design team was figuring out where and how everyone would live. For the family of Paul Sarno (Dominic Monaghan), that meant thinking of a home that could not only meet the needs of a handful of people, but keep them all in touch with their surroundings. That house, like others on the show evoking memorable ones from “Ex Machina” and “Parasite,” takes advantage of the South Dublin countryside outside each window.

“We wanted to be in nature, and we wanted our audience to feel like we were in nature as well. We didn’t want to have green screens outside of a set, so we really did build as many of the elevations and the sets to get that window onto the world,” Murphy said. “We also started to imagine that Paul might go out to an open plane or a big hillside, and then have these grand vistas off his balcony. But then we thought that maybe you might want to be in a little bit of a hollow, surrounded by trees on a slope. And we found a location like that. We reseeded the forest floor with real grass, planted it up with beautiful plants. It was really that freedom to imagine that you’re an early settler. You pick the place where you want shelter and that safety.”

Family plays a paramount part in the “Moonhaven” ethos, but even characters like Arlo Noon (Kadeem Hardison) who live alone represented a way for Murphy and his team to rethink how his living situation might differ from comparable ones on Earth.

“Something that I realized, much to the construction manager’s dismay, was that for making something a little bit ergonomic and appealing, curves and arches are really great,” Murphy said. “When you build a square room with a vaulted ceiling or round walls, it really brings you into something a bit different, and you start to have fun. So Arlo’s apartment is a little bit like a conch. You walk in and it’s sort of a spiral. The roof was vaulted, and the walls were all arched. You see the exterior and with CG, they repeat that up the hill. That was our take on an apartment or a condominium.”

Another character that gives “Moonhaven” the chance to embrace its own vision is Maite (Ayelet Zurer), the local representative tasked with helping to facilitate the first wave of residents journeying back to Earth. Her main living space is a de facto museum of different artistic and design traditions. It’s maybe the best example of how the look and feel of “Moonhaven” isn’t rooted in any one cultural reference point.

“We see a collection from all over the world, from Greek and Roman and from Southeast Asia, early artifacts of man. That’s her saying, ‘These are all the beautiful things that were great, and we’re working back to it.’ It’s an eclectic mix, but decoratively it’s very pleasing to see it all,” Murphy said. “Also, the windows out of her quarters, we made up a sort of frosted glass, with these tubes behind them. We lit them from a certain angle so that they look like orbs behind the glass. That was great fun.”

As the season goes on, “Moonhaven” starts to reveal which of the people in this new world are looking to guide and seize it for themselves. While the show’s creative team didn’t exactly share the isolationist mindset that fuels some of those lunar rebels, “Moonhaven” does offer a compelling view of how technology within this closed-off enclave — everything from projectors to record players become spherical, palm-sized luxuries — could be part of a more efficient and engaging way of life. 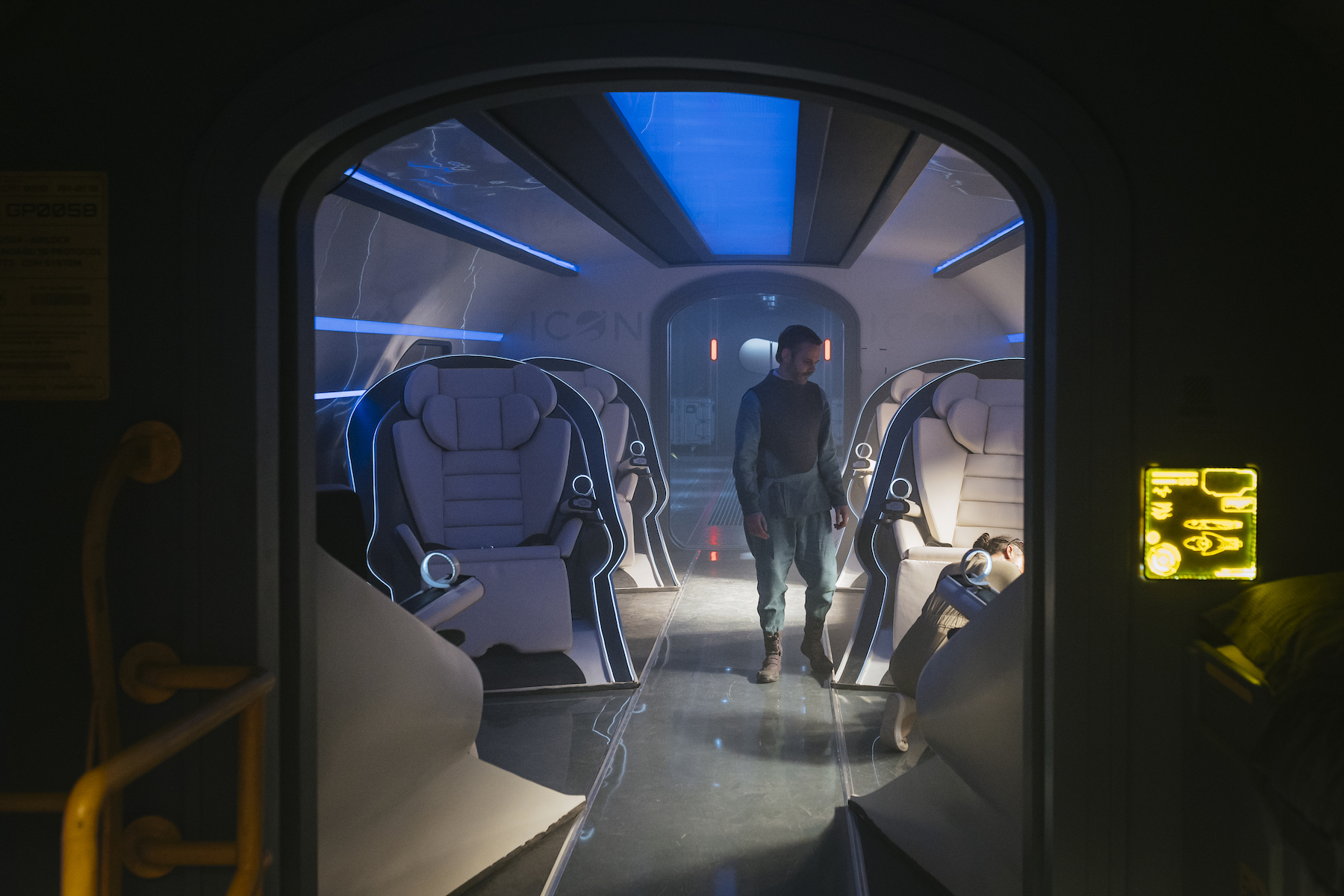 “It’s not just meant to make life easier, it’s actually meant to make those small tasks we have to do enjoyable,” Ocko said. “That’s where we’re sort of evolving, to acknowledge that we don’t just want convenience. We want them to feel that we live in a world that fulfills us moment to moment. That goes as big as providing us a purpose in life, but it also goes as small as wanting to hold something in our hand to start a call rather than just like walk into a room and say ‘Computer, start my Zoom call.’ I think we’re different creatures than that.”

Not all of the action of the series takes place on the moon. Much of the outsider viewpoint within “Moonhaven” comes from pilot Bella Sway (Emma McDonald), who guides a ship carrying (among other things) the IO envoy Indira Mare (Amara Karan). Though the ship doesn’t necessarily belong to the moon, it has the same combination of sleekness and tactility that runs through daily life where the ship lands. It’s not entirely automated — there’s an interplay between technology and the human component.

“If you go onto Pinterest, kids, adults, teenagers, everybody’s being drawing spaceships for 100 years,” Murphy said. “Peter had said that he wanted it to feel a little bit like if the Scandinavians had had built a private jet. That was a big challenge getting the flawless interior, the automatic window blinds, making sure there’s no sort of joint lines. The seat design, they were all automated recliners that were reupholstered so that they could go backwards and forwards in shots. There was miles and miles and miles of RGBW LED on the ship, just to have that look. And there was nowhere to hide. I had sleepless nights. The entire set dec crew, the swing gang, the construction and the prop guys, everybody worked until three in the morning the night before the shoot and came back at it two hours later at five in the morning. [Hovering] and cleaning and getting it all right, the automated doors and door design, getting stuff that looks just a little bit different that what you’ve seen before.”

All of these choices flow into what’s heard and spoken, rather than seen. “Moonhaven” has a full glossary of show-specific terms and phrases and ideas. The dead are referred to as “gone souls,” the stomach-churning sense of a loved one in danger is the “dreadfeel.” Even the way that those in this society categorize themselves — as “makers” or “seekers,” among others — has a certain elegance to it, one that Ocko wanted to use to highlight what’s valued here.

“It’s easy to say this is the third generation separate from this Earth that’s falling apart. But it’s hard to prove it. One of the ways I thought to prove that they really have a different life here, without the burdens of disease and labor and climate, is that their language has become more poetic,” Ocko said. “It’s allowed itself to take a moment and feel the emotions of things rather than just describe them. The language is both meant to make them feel Other but also feel organic to these people that have the luxury of not suffering. It’s one of my favorite parts, and I know it drives a lot of people batty. But I think, over time, it grows on you.”

“Moonhaven” is available to stream on AMC+. The series has been renewed for a second season.