JEREMY Vine viewers were left bemused by a bizarre suggestion as part of a recent debate on veganism.

The Channel 5 programme is known for getting viewers talking with high-octane and often heated debates and phone-ins and today was no different. 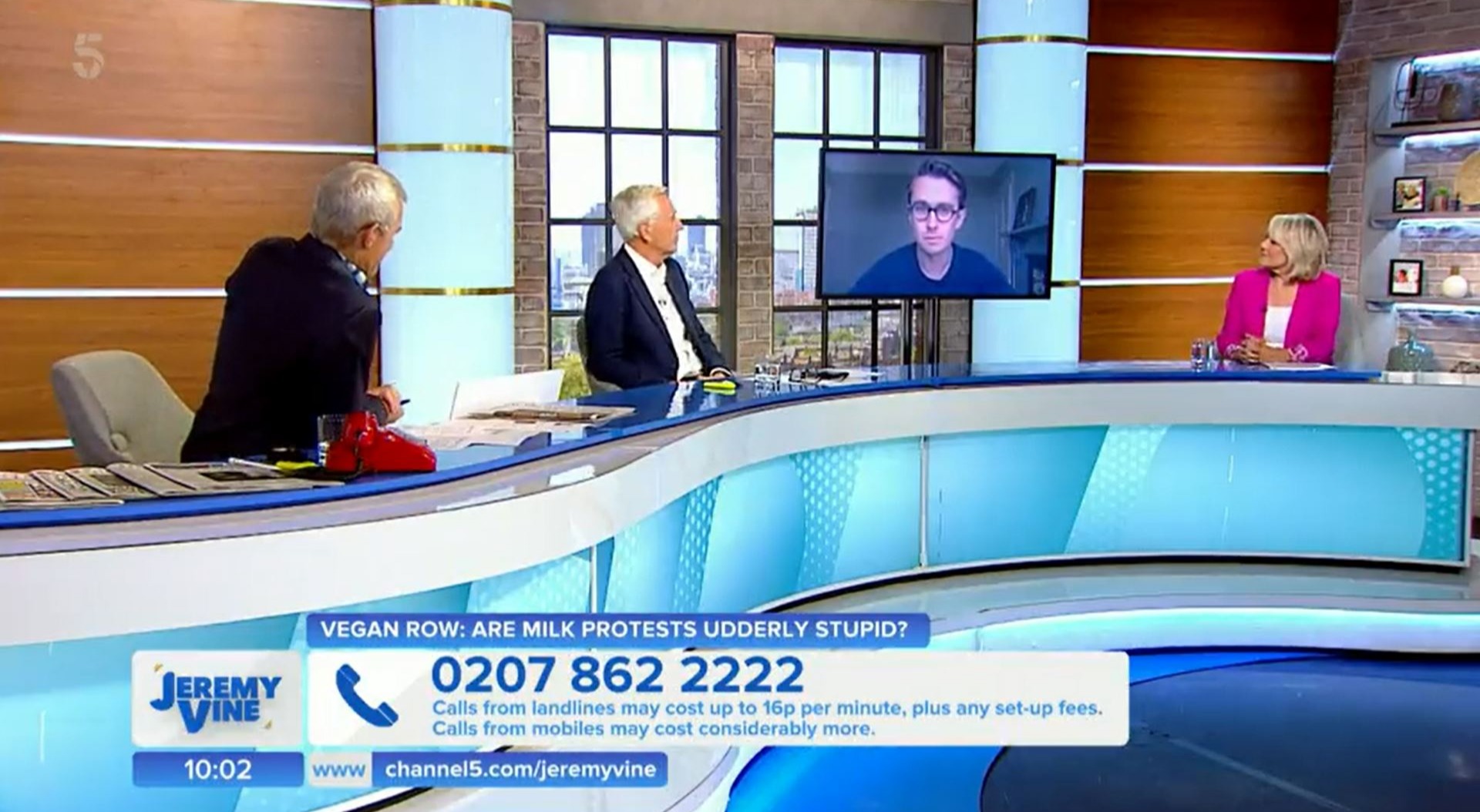 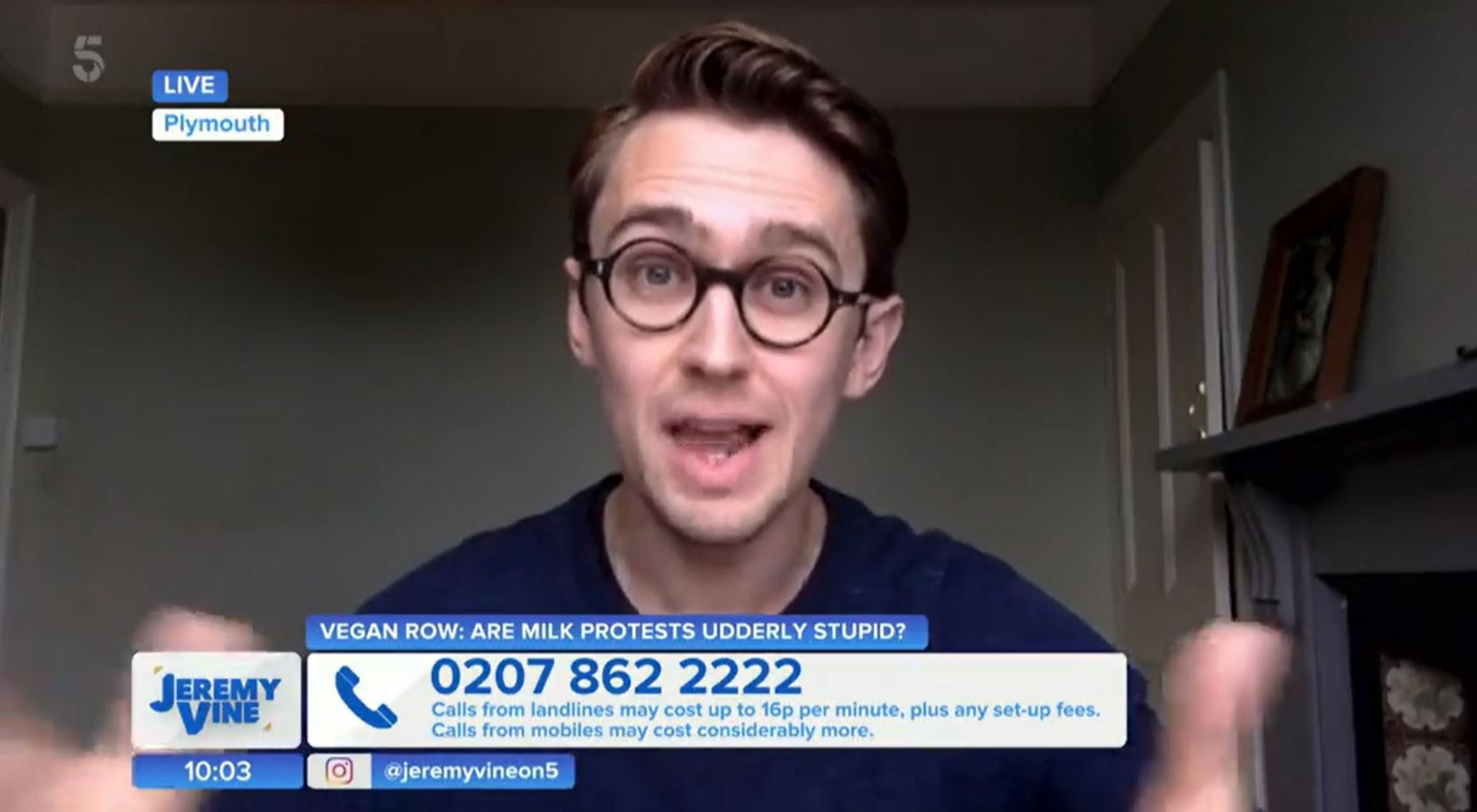 Appearing on the show today was climate activist Joel Scott-Halkes who argued that in order to improve the nation the government should consider imposing a ban on meat and a full-scale transition to a plant-based society.

Joel argued his controversial point on the show against journalist Nina Myskow and former MP Nick de Bois who was quick to challenge Joel on his comments.

In a bid to gain recognition by the government, Joel and other members of the group Animal Rebellion have turned to criminal tactics in a bid to gain some form of recognition including deliberately puncturing the tyres of lorries and vehicles as well as taking part in a number of highly disruptive protests.

Jeremy was quick to tackle Joel about whether turning to such activities was valid regardless of opinion on the subject matter. 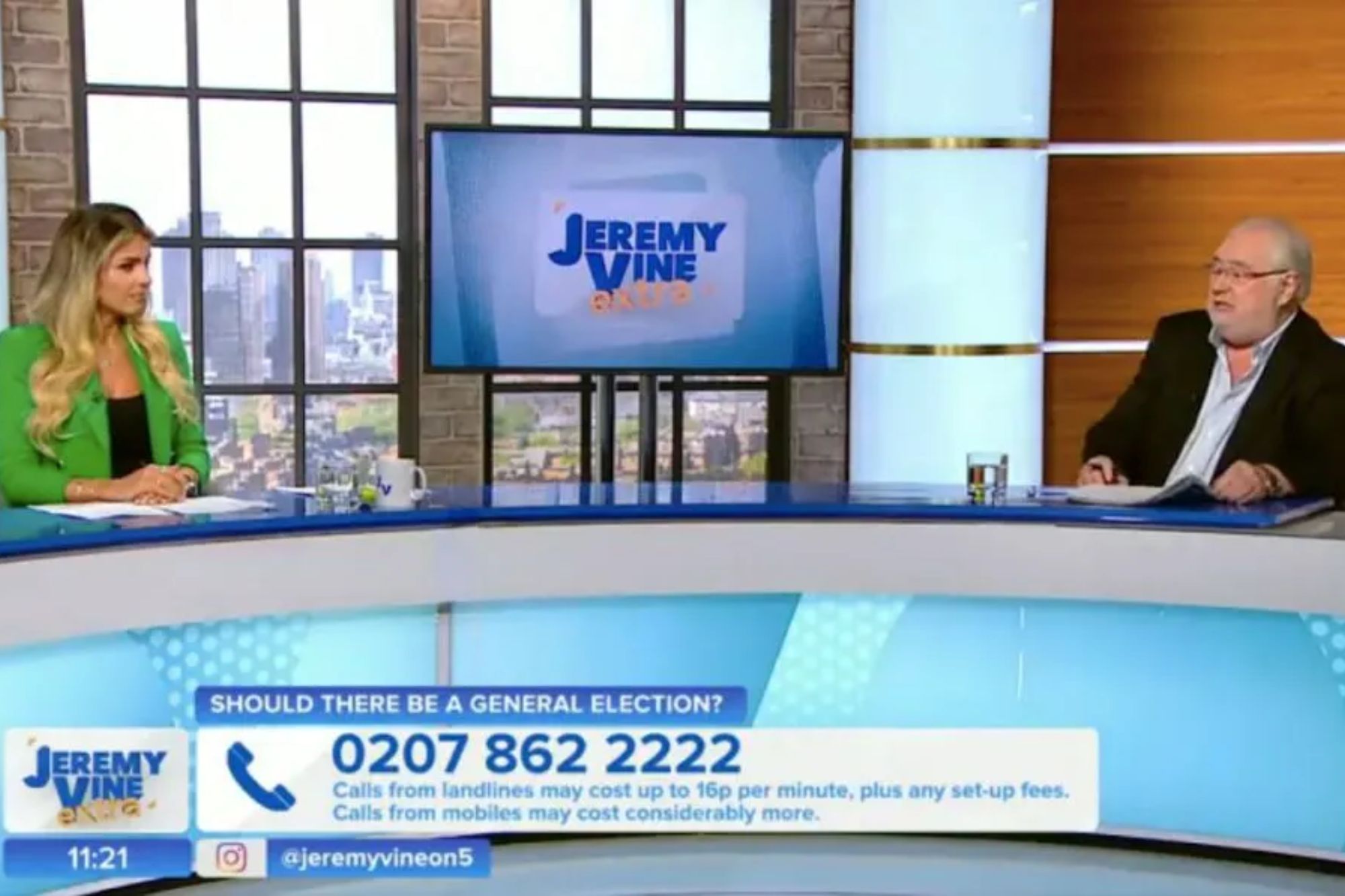 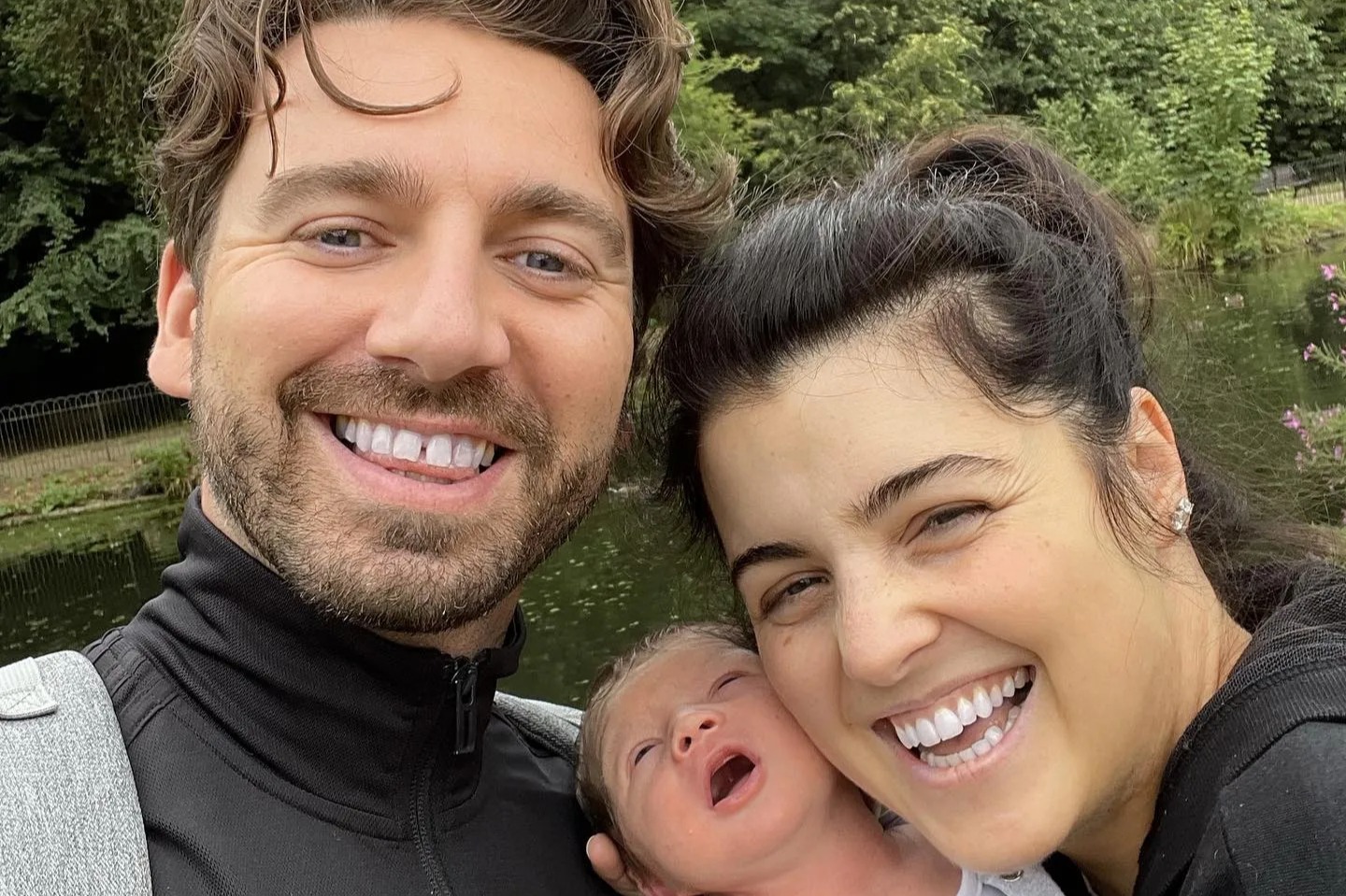 Jeremy asked the activist: “I hear you, but none of that justifies law-breaking, none of it.”

Joel responded: “We’ve got ordinary people, we’ve got nurses, we’ve got delivery drivers, receptionists, we’ve got teachers, taking civil disobedience, something which has happened throughout history such as Martin Luther King to the Suffragets to Gandhi…”

Joel trailed off as he was interrupted by Jeremy who specifically questioned him on the ‘drilling of lory tyers’ saying: “It’s not a good thing is it?”

Joel remarked back: “Well, the destructiveness of the dairy industry means that this kind of action is propotionale.

“What we are talking about here is essentially disabling weapons of mass destruction.

“The meat and dairy industry has torched our planet.”

However it appeared Joel’s ramblings fell on deaf ears.

One viewer commented: “Why are we indulging these cultists? Letting them pretend that we can switch from grazing sheep and cows on the fields out back here to growing some sort of arable crop? Does Joel have even the first clue about actual farming?

“It really pisses me off listening to townie vegans promoting their unhealthy lifestyle. But it is even worse when they think they can reform our farming sector to indulge their prejudice.”

One viewer fought back at the suggestion it become a government decsion to turn to a plant-based society, saying: “Think it should be up to us and not forced on us.”

A third remarked: “As an ethical vegan who despises the meat and dairy industry I think it’s counter productive. All this does is ‘others’ vegans even further and fewer people take us seriously. BIG mistake AR! Hearts and minds are not won by chucking paint over Big Ben! NOT the way to influence.”

Another furious viewer ranted: “Who the f*** do you think you are trying to demand and force people to eat rabbit food I love my Lamb, Beef, Chicken, Duck, Goose, and any other meat that's available and not gonna have these niave morons try to stop me eating it!”

One disgruntled fan raged: “Jog on and stop trying to stop people having the free choice to eat meat or drink milk as it's very authoritarian to take away other people's free choice. Also not everyone believes in the theory of man made climate change! You also lose support when you commit criminal damage.” 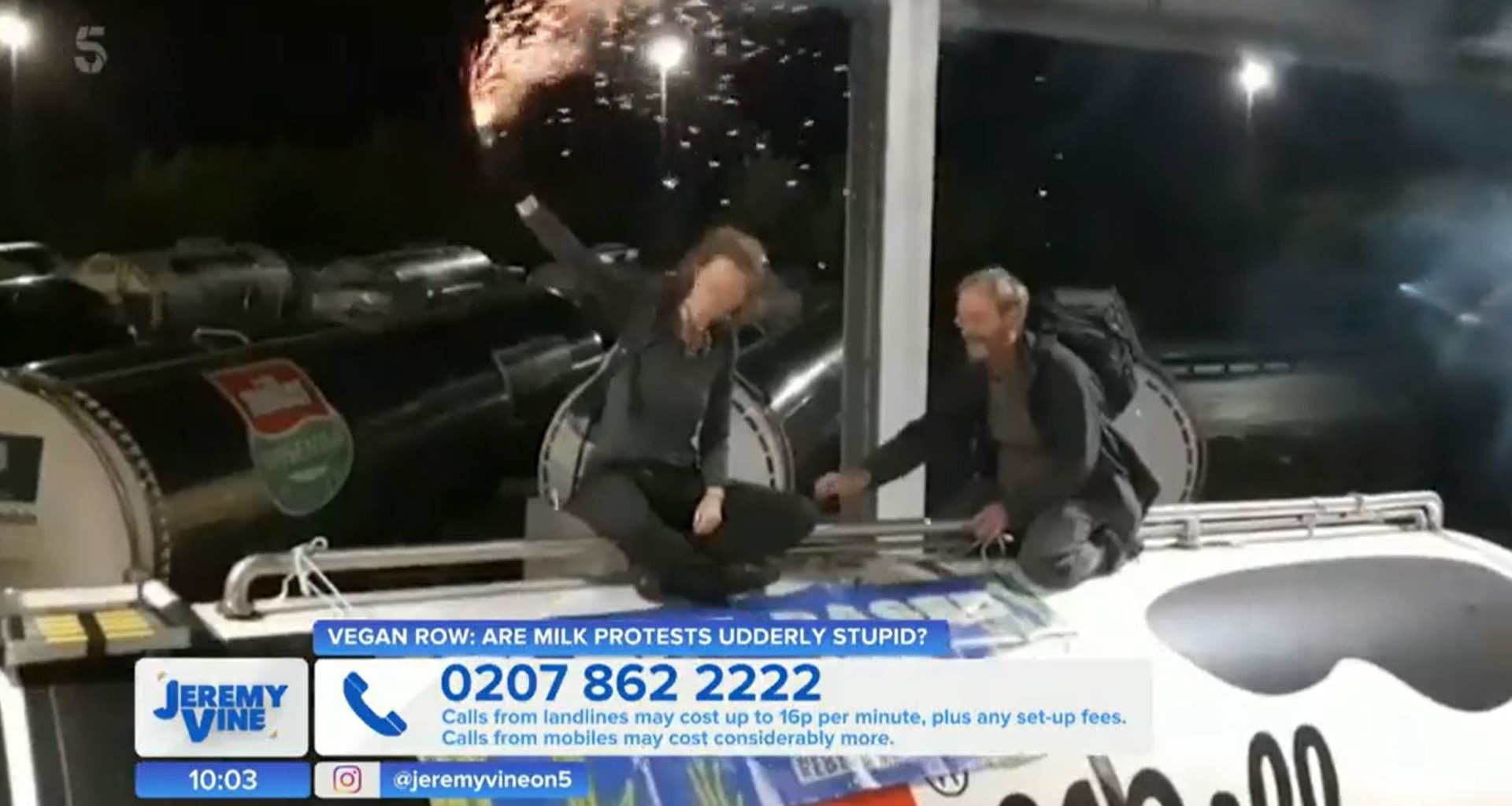 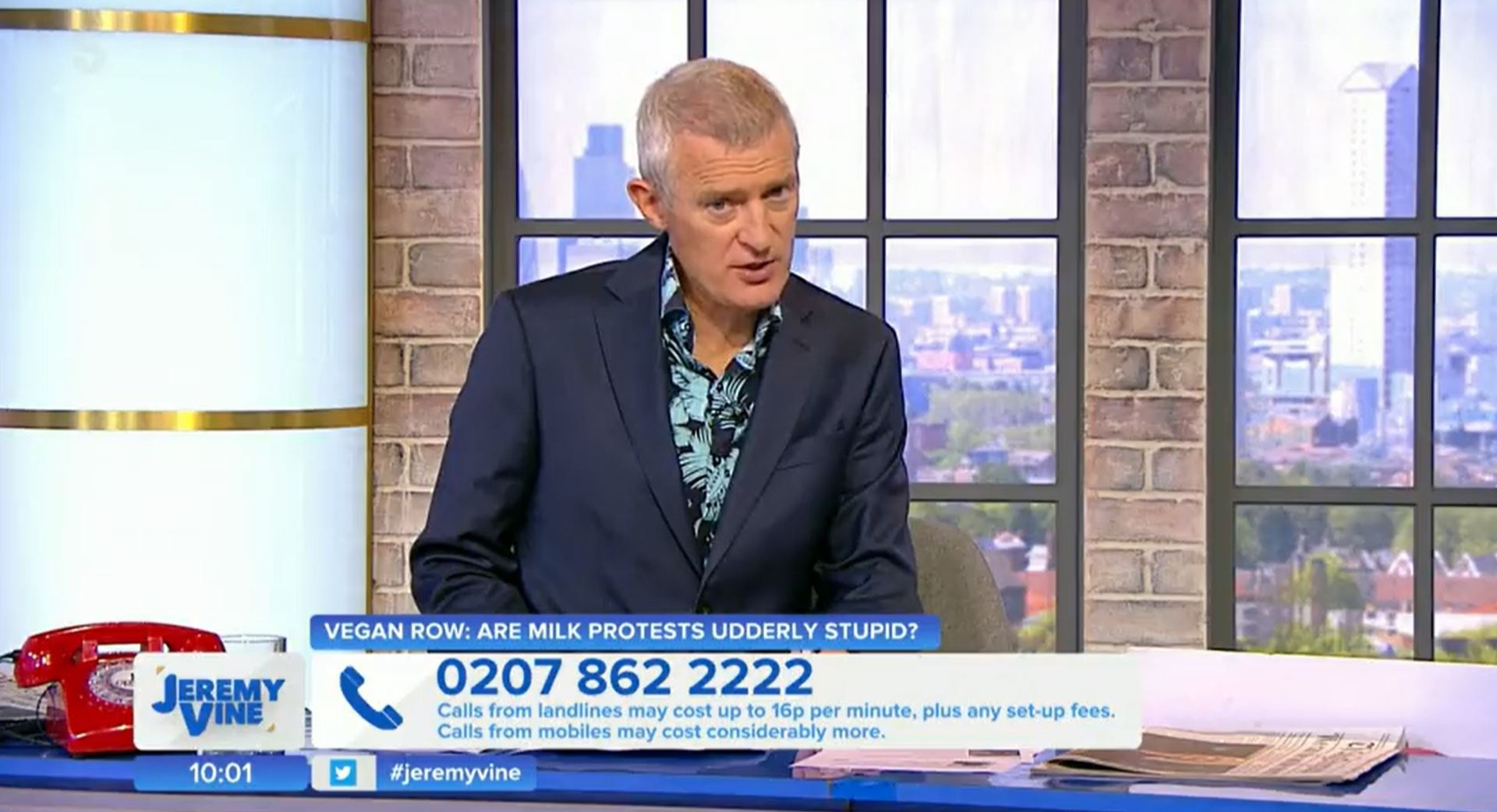